Co-host Brian Kilmeade suggests that the "legitimate socialist" Sanders could turn the U.S. into "Venezuela" 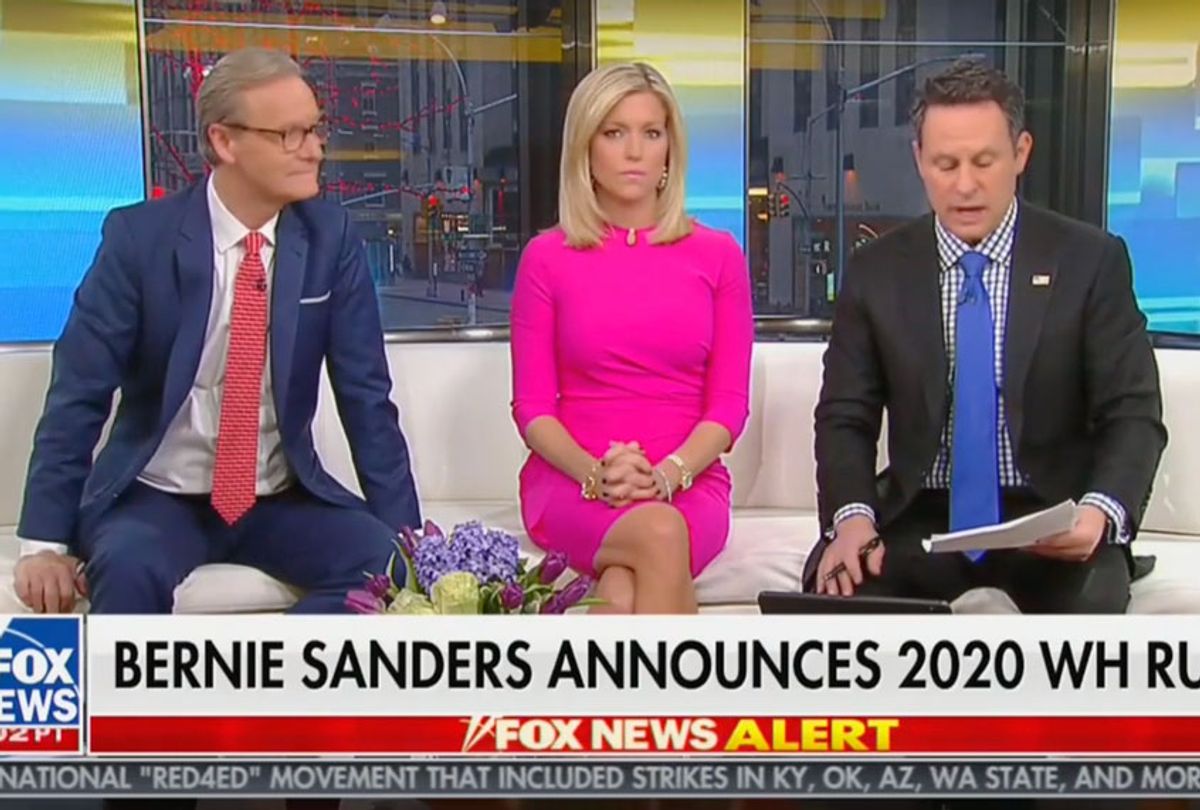 Shortly after Sen. Bernie Sanders (I-Vt.) announced that he was forging a second bid for the Democratic presidential nomination in 2020, the hosts of "Fox & Friends," President Donald Trump's favorite morning show, warned viewers of the dangers of a "legitimate socialist" clinching the nomination.

Sanders, who self-identifies as a democratic socialist, announced on Tuesday that he was joining the 2020 Democratic field in an email to supporters.

"More and more people are supporting the socialist agenda — and that's what you get with him," co-host Ainsley Earhardt said Tuesday, noting that the other eight official candidates for the Democratic nomination had also adopted some "socialist" ideas, among them tuition-free college and health care for all Americans. She pointed out that in a Fox News survey, Sanders polled second behind former Vice President Joe Biden as the favorite Democratic candidate. (Biden has not formally entered the 2020 race, although he has hinted at his Oval Office ambitions and is expected to also throw his hat in the ring.)

"If you vote for Bernie, this is what you're getting: free tuition, $15 minimum wage, health care as a right for all people. Radical ideas are now mainstream ideas, because of your support," co-host Brian Kilmeade said. "Everyone gets everything for free, because these horrible rich people have had it too good for too long. He’s a legitimate socialist. There's those that dabble, but he's been there."

Kilmeade then pointed to the timing of Sanders' announcement, which came just one day after Trump denounced socialism and reiterated his support for Venezuelan opposition leader Juan Guaidó at an event in Miami.

"The timing of a socialist declaring for president one day after the president of the United States condemned socialism in Miami. And we look at Venezuela as a case in point of what could happen to America with all our natural resources, with all our history like Venezuela, much richer than Venezuela and all their oil resources," Kilmeade added. "They have gone into the toilet as a country. They can’t even stock their shelves with food that would be too expensive to buy, anyway, because of inflation."

Sanders, who lost against Secretary of State Hillary Clinton in the 2016 primary, faces competition for the Democratic nomination from fellow Sens. Kamala Harris of California, Cory Booker of New Jersey, Elizabeth Warren of Massachusetts, Amy Klobuchar of Minnesota. Reps. John Delaney of Maryland and Tulsi Gabbard of Hawaii, former secretary of Housing and Urban Development Julián Castro and South Bend Mayor Pete Buttigieg are also vying for the 2020 Democratic nomination.

Despite coming in second in 2016, Sanders could emerge as the Democratic Party's frontrunner in 2020. Less than four hours after he announced his second presidential campaign, the 77-year-old lawmaker raised $1 million, propelling him well ahead of other 2020 hopefuls who launched their bids with significant financial support. Additionally, since 2016, the Democratic Party has adopted many of the progressive positions that Sanders had embraced in contrast to Clinton's more moderate stances during the 2016 election cycle.

Along the way, Sanders has established himself as a national figurehead for socialist ideas by pushing ideas including a "Medicare-for-All" healthcare system, combating climate change through a "Green new Deal," a $15-an-hour minimum wage, tuition-free college and university. He has also pledged not to accept money from special interests or corporate PACS. (Sanders, however, did accept cash from some PACs.)

"I'm running for president, because we need to make policy decisions based on science – not politics," Sanders wrote in an email to supporters on Tuesday. "We need a president who understands that climate change is real – is an existential threat to our country and the entire planet – and that we can generate massive job creation by transforming our energy system away from fossil fuels to energy efficiency and sustainable energy."

Several Democrats in the 2020 race, including Warren, Harris and Booker, have embraced some of Sanders' progressive ideas, suggesting the success of his White House bid this time around could depend on whether voters believe he is the best messenger for the ideas he helped popularize.

"Make no mistake about it: The powerful special interests in this country have unbelievable power and they want to maintain the status quo. They have unlimited amounts of money to spend on campaigns and lobbying and have huge influence over the media and political parties," Sanders told supporters in an email Tuesday. "The only way we will win this election and create a government and economy that works for all is with a grassroots movement — the likes of which has never been seen in American history."