"We'll get the hemp ropes out, loop them over a tall limb and hang all of them," Goodloe Sutton wrote in an op-ed 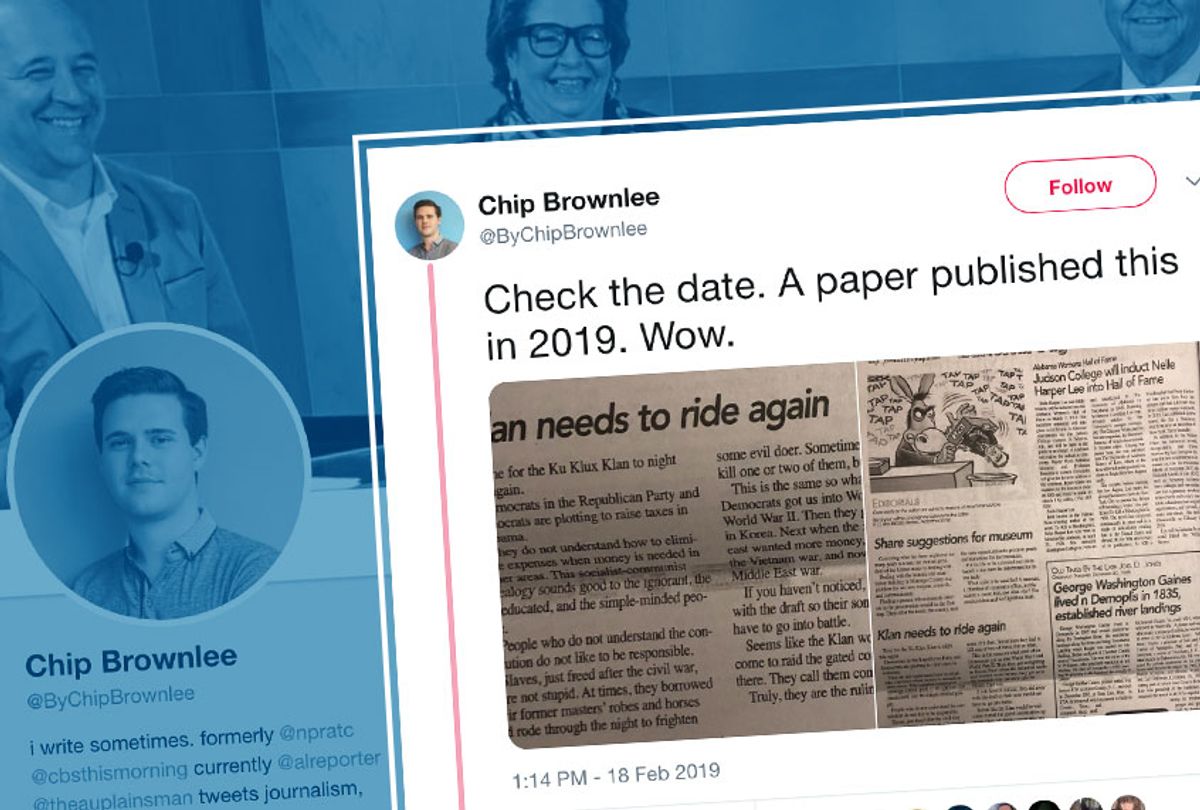 The publisher of a local Alabama newspaper penned an editorial calling for "the Ku Klux Klan to night ride again" on Valentine's Day.

The article, published in the Democrat-Reporter newspaper in Linden, Ala., said "the Klan would be welcome to raid the gated communities up there," seemingly referring to where "Democrats in the Republican Party and Democrats [who] are planning to raise taxes in Alabama" live.

Goodloe Sutton, the newspaper's publisher, confirmed to the Montgomery Advertiser on Monday that he had penned the Feb. 14 editorial calling for the comeback of the white supremacist group. He was unapologetic.

"If we could get the Klan to go up there and clean out D.C., we'd all been better off," Sutton told the newspaper. "We'll get the hemp ropes out, loop them over a tall limb and hang all of them."

Sutton also claimed he was not calling for the lynchings of Americans. "These are socialist-communists we're talking about," he said. "Do you know what socialism and communism is?"

Sutton also blasted the "socialist-communist ideology" in his editorial, writing it was for "the ignorant, the uneducated and the simple-minded people."

Federal lawmakers from Alabama denounced Sutton, urging him to resign from his position at the newspaper.

"OMG! What rock did this guy crawl out from under? This editorial is absolutely disgusting & he should resign -NOW!" Alabama's lone Democratic Sen. Doug Jones tweeted. "I have seen what happens when we stand by while people-especially those with influence- publish racist, hateful views. Words matter. Actions matter. Resign now!"

"For the millions of people of color who have been terrorized by white supremacy, this kind of 'editorializing' about lynching is not a joke – it is a threat," Democratic Rep. Terri Sewwll wrote on Twitter. "These comments are deeply offensive and inappropriate, especially in 2019. Mr. Sutton should apologize and resign."

Sutton was inducted into the University of Southern Mississippi's Mass Communications and Journalism Hall of Fame in 2007, along with his wife, Jean Sutton, who died in 2003. In a statement, the school announced it had removed his place in their hall of fame "in light of Sutton's recent and continued history of racist remarks."

"Within the last few hours, the School of Communication at the University of Southern Mississippi learned of Mr. Goodloe Sutton’s call for violence and the return of the Ku Klux Klan. Mr. Sutton's subsequent rebuttals and attempts at clarification only reaffirm the misguided and dangerous nature of his comments," the University of Southern Mississippi said. "The School of Communication strongly condemns Mr. Sutton's remarks, as they are antithetical to all that we value as scholars of journalism, the media and human communication."

Sutton worked at the paper since 1964, according to the Advertiser. He inherited the publication from his father.

In 2015, a USA Today profile said the Democrat-Reporters' "circulation figures are in the dumps" and noted that the paper has lost more than half of its subscribers with a history of "racial references" in headlines. One example that was given: "Selma black thugs murder Demopolite Saturday night."