Meghan McCain confronts Tulsi Gabbard over Bashar al-Assad: "Is he an enemy of the United States?"

“When I hear the name Tulsi Gabbard, I think of Assad apologist," McCain told the 2020 Dem candidate on "The View" 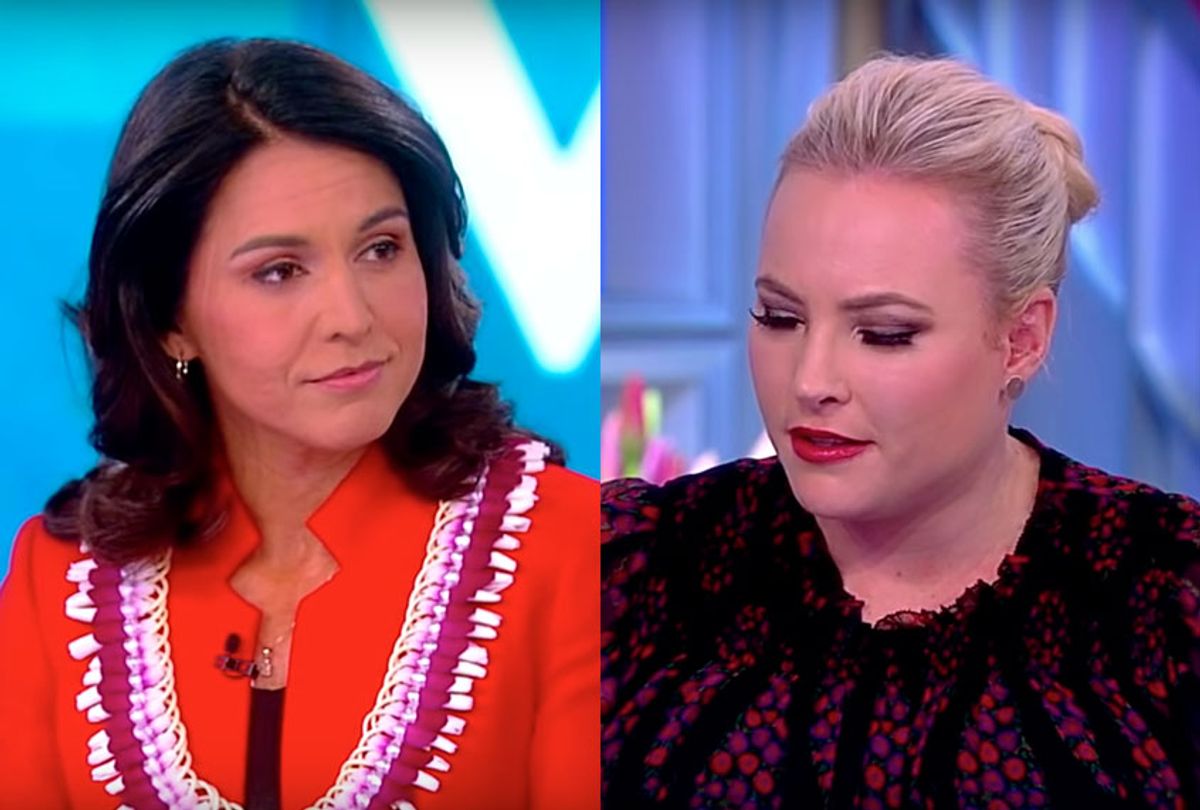 Hawaii’s Democratic Congresswoman and presidential candidate Tulsi Gabbard clashed with The View’s resident Republicans Meghan McCain and Ana Navarro, as the three battled over Gabbard’s non-interventionism, saying she was essentially allowing authoritarian dictators to massacre their people, while Gabbard pointed to the United States’ long history of failed humanitarian invasions.

“When I hear the name Tulsi Gabbard, I think of ‘Assad apologist.’ I think of someone who comes back to the United States and is spouting propaganda from Syria,” said McCain, who wasted no time putting Gabbard on the spot. “You have said that the Syrian president, Assad, is not the enemy of the United States, yet he’s used chemical weapons against his own people 300 times, that was a red line with President Obama.”

“You’re putting words in my mouth that I never said,” Gabbard began but McCain interrupted.

“There’s no disputing the fact that he has used chemical weapons and other weapons against his people,” Gabbard said. “My point is that the reality we are facing here is that since the United States started waging a covert regime change war in Syria starting in 2011, the lives of the Syrian people have not been improved.” She added that Iran and al Qaeda had been the only beneficiaries.

Ana Navarro jumped in and took Gabbard to task over her opposition to U.S. intervention in Venezuela.

“I’m very troubled by the tweets about Venezuela that you’ve put out,” she said, describing President Nicolas Maduro as a “thug” and “a dictator” who was starving his own people. “Why are you so against intervention in Venezuela, not military intervention but what we are doing?”

“Because every time the United States, and particularly in Latin America, has gotten involved in regime change, using different tools to enact that regime change, there have been both short and long-term devastating impacts,” Gabbard replied, saying the U.S. should work with neighboring countries to provide humanitarian aid. “But for the United States to go in and choose who should be the leader of Venezuela, that is not something that serves the interests of the Venezuelan people.” She pointed to Iran as an example of the United States’ failed regime change policies.

“The CIA led a covert operation to overthrow the government in Iran decades ago, of Mosaddegh,” she said. “This led to decades upon decades of hardship and suffering and authoritarian government, and has led us to the place where we’re dealing with many challenges today from Iran.”