"How To Train Your Dragon" trilogy soars to end with visually magnificent, bittersweet finale

"How To Train Your Dragon: The Hidden World" is the perfect closing note on which to end the "Dragons" trilogy 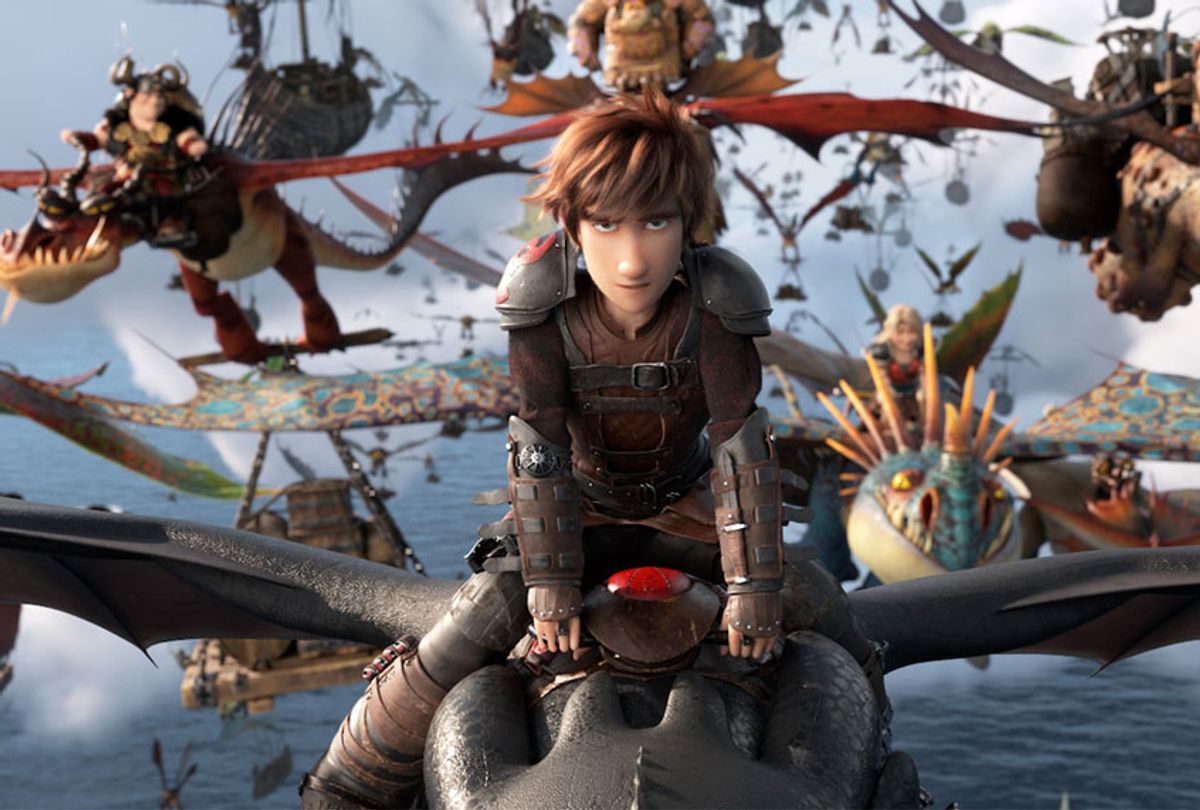 "How to Train Your Dragon: The Hidden World" (Universal Pictures[)
--

Picking up one year after the events of "How To Train Your Dragon 2," the third film involves Hiccup (Jay Baruchel) deciding to solve Berk's dragon overpopulation problem by moving the Vikings and dragons who live there to a secret place, The Hidden World, which is unknown to the rest of humankind. Leading the exodus of the entire Berk community are Hiccup, his pet dragon Toothless, girlfriend Astrid (America Ferrera), mother Valka (Cate Blanchett), adviser Gobber the Belch (Craig Ferguson) and friends Eret (Kit Harington), Snotlout Jorgenson (Jonah Hill), Fishlegs Ingerman (Christopher Mintz-Plasse), Ruffnut Thorston (Kristen Wiig) and Tuffnut Thorston (Justin Rupple). Yet even as Hiccup wishes to save dragonkind, the species continues to be threatened by humans who want to trap or kill them, most notably the crazed hunter Grimmel the Grisly (F. Murray Abraham), who schemes to kill Toothless and the dragon's new love interest the Light Fury so that all Night Furies will be extinct.

One of the admirable things of this plot is that it doesn't play things safe. In a mediocre family movie, the producers' concern for the supposedly delicate sensitivities of the children watching it would result in a film that avoids genuine tragedy and painful choices. The second film made it clear that this wouldn't happen in the series by killing off Hiccup's father Stoick the Vast (Gerard Butler) and the follow up does likewise when Hiccup realizes that human beings are simply too greedy, too bloodthirsty and too cruel to coexist with dragons.

As Hiccup contemplates his options, it dawns on him that there may not be a solution which completely avoids some kind of tragic sacrifice. Instead of offering a deus ex machina or having characters unrealistically change their ways, "How To Train Your Dragon: The Hidden World" allows this conflict to be resolved in a way that — though bittersweet and perhaps a bit too sad for very young children — makes sense given this world and its established rules.

That said, a warning should be offered to parents: This movie does not have a full-fledged happy ending, and little children may have trouble accepting it.

For those who are old enough to handle that tough pill, though, the new movie is a veritable feast for the imagination. Like its two predecessors, "How To Train Your Dragon: The Hidden World" delights in the visual design of the titular dragons themselves. There are big dragons and small ones, multicolored beasties and gangly, cumbersome monstrosities. In order for any fantasy story to be compelling, it must do an effective job at world-building, both grounding its supernatural elements in a believable reality while making them sufficiently creative to capture our interest. All three movies in this series have succeeded in spades by focusing on the dragons themselves: Their looks, their personalities, their powers and their relationships with humans. It's not just a smart move from a marketing standpoint (there is a lot of dragon merchandise that can be sold through this kind of property), but works on a storytelling level as well. If we're going to spend time in a world based around human interactions with dragons, the best way to make us want to stay is to focus on creating fascinating dragons.

"How To Train Your Dragon: The Hidden World" also boasts some of the best animation in the series. Particularly notable here are the courtship scenes between Toothless and the Light Fury, where the two dance through the sky in a choreographed ballet that takes them over lush valleys, through dense storm clouds and into mystical landscapes. Minutes pass without dialogue during these scenes — another daring choice to make for a children's movie — but the result is visually riveting and at times quite moving. There are live action rom-coms that spend their entire running time trying to invest us in their love stories that don't succeed half as much as "How To Train Your Dragon: The Hidden World" does in its Toothless-Light Fury subplot.

If there is any serious flaw in the movie, it's that not all of the secondary characters are given satisfactory resolutions to their character arcs. Perhaps this was inevitable, given how many side plots are being juggled, but several threads that were either established in previous movies or in this one are dropped, rushed through or allowed to anticlimactically fizzle out. It's as if the filmmakers assembled so much talent and gave them so much to do in the first two-and-a-half movies that, when they realized the final half of the last film was upon them, they shrugged and accepted that a few balls would have to be shortchanged because there was simply too much to do. While I don't doubt that DeBlois had a larger vision for the "How To Train Your Dragon" story — and, for all I know, some of these stories were better handled in the book series by Cressida Cowell that inspired this trilogy — it's a disappointing and uncharacteristically sloppy way to handle a film series' finale.

This is no small quibble, but thankfully it does not detract from the moviegoing experience overall. If you are a fan of the first two "How To Train Your Dragon" films, you will love this one.