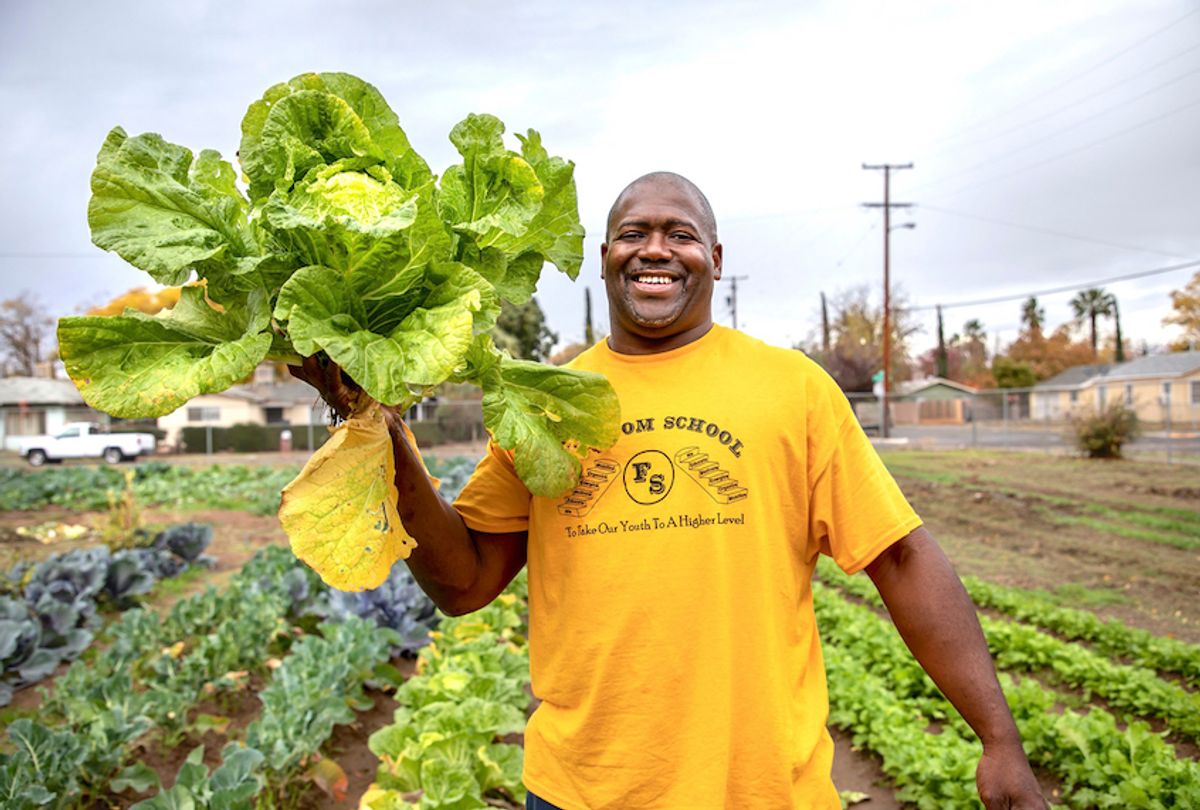 At New Light for New Life Church of God in West Fresno, the well-tended backyard yields a colorful fall crop — green and purple cabbage, cauliflower, collard greens, and curly kale. A few stalks of okra are left, too, as a reminder of summer’s bounty. But this is not just any church garden. This is the Freedom School Demonstration Farm, a year-round vegetable farm managed by a core group of 37 children and their adult mentors.

“It’s very healing to get your hands in the dirt,” said Aline Reed, Freedom School’s board chair. “For African-American children, especially, we are changing the narrative of working outside — of planting, harvesting, and working.”

The church’s associate pastor, the Rev. Floyd D. Harris Jr. (pictured above), founded the Freedom School in 2015 based generally on the Freedom Schools of the 1960s Civil Rights movement. This school is a wrap-around program for West Fresno youth, offering cultural, educational, and job skills programs to at-risk students in grades K-12.

The urban farming group meets on Saturdays during the school year and twice a week during the summer, including at least three farmers’ markets held at the church. Children also perform public service projects and give produce to seniors and others in the neighborhood. In addition to agriculture, the Freedom School teaches tangible job skills such as construction, landscaping, janitorial work, photography, journalism, and video production. Dr. Ruth Dahlquist-Willard, a small farms advisor with the University of California Cooperative Extension Service in Fresno, occasionally works with community programs like the Freedom School. “It’s a small group, but they are filling an important role in the food security of our communities,” she said. “You’ve got projects like the Freedom School and the Sweet Potato Project [run by the West Fresno Family Resource Center] that are providing young people opportunities they might not have had in job development.”

Harris grew up in West Fresno and remains passionate about the need to lift up its low-income residents. One recent analysis rated Fresno, 8 percent of whose 527,000 residents are Black, the 10th-worst U.S. city for African-Americans to live in: the Black median income is $25,895, less than half the average white income in the city, and the Black poverty rate is 41.2 percent—one of the largest rates for any city—compared with a 13 percent white poverty rate. Fresno was the only West Coast metro area to make the list.

When Maria Else joined the Freedom School Board in 2017 as its secretary and curriculum coordinator, the urban farming program “was only supposed to be in the summer,” she said. But based on the children’s interest and enthusiasm, the demonstration farm extends year-round.

“Farming has so many parts to it,” Else said. “The kids all kind of gravitate toward different areas. And that’s what we want to teach them: Agriculture is not just planting. It is engineering and science and so many different aspects.” The curriculum covers a wide range of topics, too. In January and February, the Saturday classes focus on African-American culture and history. (While Fresno is a predominantly Latinx city, and the Freedom School is open to students of all backgrounds, its home in an African-American church guides much of its curriculum and student body.)

In the spring, several weeks of planting are followed by farm maintenance. During the summer, the program expands to twice a week, allowing time for harvesting, selling, and field trips. In September, the urban farmers prepare their entry for the Big Fresno Fair, where they’ll enter recipes such as watermelon chutney and craft projects like black-and-green potholders.

As the year winds down, the students plant and maintain winter crops while learning about nutrition and cooking. The young students have learned to prepare dishes such as stuffed peppers, black-eyed pea hummus, dill pickles, and their award-winning watermelon chutney. Healthy eating is a frequent topic.

“We talk to them about different diseases and illnesses that affect African-Americans, including high rates of diabetes and high blood pressure,” Else said.

They’re also getting exposure to the world of agricultural research. Last spring, researchers selected the Freedom School as one of three test sites to grow two types of black-eyed peas—one a U.S. commercial blend, and the other an aphid-resistant strain crossed with Nigerian lines from the International Institute of Tropical Agriculture. The project included researchers Bao-Lam Huynh and Philip Roberts of U.C. Riverside, plus Nick Clark and Dahlquist-Willard, both with the U.C. extension service. Freedom School students helped plant, maintain, and harvest the peas. Dahlquist-Willard is analyzing their results.

“The Nigerian blend did not get one aphid on it, and they were planted right next to the American blend, which was covered in aphids,” Else reported. “We don’t know what kind of magic is in those Nigerian black-eyed peas.”

Changing the narrative of black farmers

Arogeanae Brown, who grew up in Fresno and now works for the U.S. Department of Agriculture (USDA), wrote her Virginia Tech master’s thesis about nine Black-led community-based agricultural programs, including Freedom School Fresno. She also devoted time to mentoring its students when she came home between semesters, talking with them about agricultural careers and introducing them to groups like 4-H and Future Farmers of America. “It’s very healing to get your hands in the dirt,” says board member Aline Reed.

Although the ag programs Brown studied welcome children of all races, Brown concluded, the emphasis on Black history helped African-American children thrive. “[The school’s] major focus was allowing students to have a knowledge of their history—where they come from and how the land is managed,” she said. “To get students interested in agriculture overall, we really have to dig up our history and understand slavery.”

Freedom School also strives to change the Black farmer stereotype, which is often cited as a barrier to entry for ag-related careers.

“Most Blacks have an impression of farming based on our history in this country,” said Fresno farmer Will Scott, citing a history of slavery, sharecropping, and Jim Crow laws. “But we need to get back into it from a new approach. We need to get young people of color back to the farm not just so they can grow their own food but so they can participate in the food system.”

The challenges facing Black farmers in Fresno are mirrored nationwide. In the 2012 USDA Census of Agriculture, Black farmers accounted for just 1.4 percent of the country’s 3.2 million farmers. California reported 526 Black farm operators—.7 percent of the state’s nearly 78,000 total farms—of whom only 345 were principal operators in charge of day-to-day operations. In Fresno County alone, only 42 out of 5,683 farms reported African-American farmers.

Harris sees the Freedom School as one way to give African-American children in West Fresno the extra help they need to avoid becoming another statistic. Of more than 100 students to complete the program, several have received college scholarships, and two have completed USDA internships.

“God has favor on us,” Harris said, “because when we look at the success rate of our students—the grades are going up, the behaviors are getting better, they’re eating better, and they’re winning competitions. This is self-esteem building.”

Board Chair Reed said the Freedom School shows kids that agriculture is not just a pastime; “This is something you can devote a career to and make it your future,” she said.

Harris agreed. “When we can see our children walking across the stage with a second degree and a $100,000 job waiting on them at the USDA, that’s what we want to see,” he said. “We want these children to grow into healthy Black men and healthy Black women, and to change society to be a healthy place for them.”