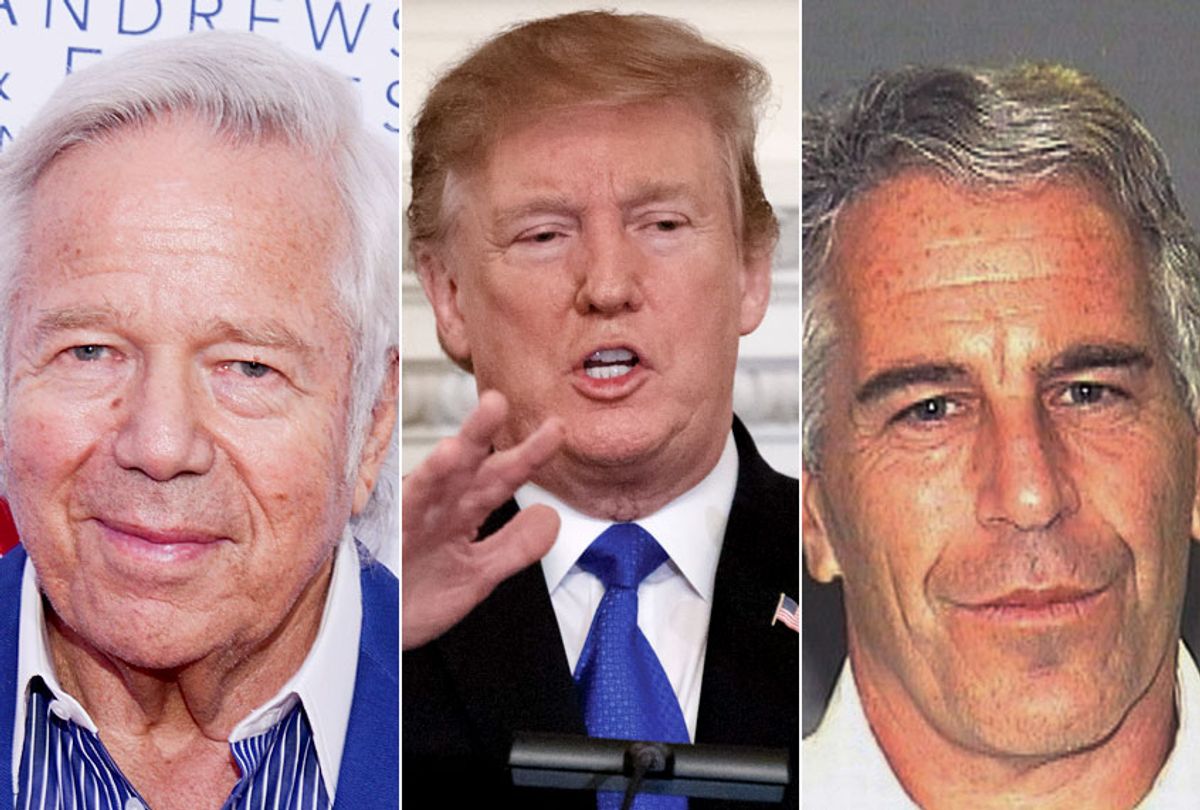 At this point, it wouldn't be that surprising to learn that the American billionaire class has a lavishly appointed ranch hidden away where, for a healthy fee, members can kick back, relax and hunt human beings for sport.

Last week, the country got another glimpse of the sheer depravity many of our economic betters live in, and an ugly reminder of how much their wealth and power shields them from culpability.

On Friday, law enforcement in Florida revealed the results of a lengthy investigation into the nauseatingly-named Orchids of Asia Day Spa, which authorities say was merely a cover for a sex trafficking operation that is also suspected to be involved in money laundering. Hundreds of men have been charged in the case for having sex with women whom officials say were being held captive. The most prominent of these men is Robert Kraft, the billionaire owner of the New England Patriots and a friend of Donald Trump.

There are further hints that this brothel, which charged $79 an hour for sex with women who authorities say weren't being paid, was a favorite of the monied class generally. Other prominent men busted as johns at this location include finance giant John Childs and former Citigroup CFO John Havens.

The news of this sting operation came out right after another major development in the story of Jeffrey Epstein, a prominent investment banker who has also been accused of sex trafficking. Epstein was accused of procuring dozens of girls, some as young as 13, both for his own sexual gratification and, allegedly, to farm out to his wealthy friends. Epstein got off with a slap on the wrist in 2008 for this, after striking a deal with federal prosecutor Alexander Acosta, who is now Trump's labor secretary. Instead of going to a normal state penitentiary, Epstein was sent to a relatively cozy private prison in Palm Beach, and even then, spent much of his 13-month sentence on "work release" at his office instead of incarcerated.

Now a federal judge has ruled that the deal, which explicitly shields any of Epstein's named or unnamed co-conspirators from prosecution, broke the law and violated the rights of the victims. There is some chance now that the plea deal could be terminated.

This shoddy deal, former federal prosectors Mimi Rocah and Berit Berger argue at NBC News, was not the result of  "mistakes by overwhelmed or overworked prosecutors," but rather was a "calculated plan by the prosecutor in charge" working with Epstein's attorneys. Why? Because Acosta's team "did not want bad publicity for Epstein, they did not want other perpetrators exposed and/or they did not want the victims to object."

Acosta is now a member of Trump's Cabinet, which is sadly no surprise. Trump himself was infamously recorded in 2005 bragging about how his wealth and fame allows him to sexually assault women without consequence, noting that he likes to "grab them by the pussy" because "when you're a star, they let you do it."

It's unbelievable but apparently true: America's intensifying wealth inequality has created a class of hyper-rich men who act like cartoon villains. Bored of their soft and pampered lives, they literally turn to torturing women for fun.

But women who work as highly-paid escorts are free to say no.

The underage girls that Epstein lured from troubled homes, the women allegedly pushed into working without pay at the Orchids of Asia Day Spa, and the women Trump bragged about grabbing and kissing: What they all have in common is that they can't say no.

In a similar article responding to the sexual assault allegations against Supreme Court Justice Brett Kavanaugh, Lili Loofbourow of Slate wrote about the "toxic homosociality" that "involves males wooing other males over the comedy of being cruel to women."

That cruelty clearly doesn't stop in adolescence for many men. And it's not limited to being a performance for other men, either. The pleasure of dominating a woman — of knowing she can't say no — is one that's enjoyed both on its own and in the sharing of it with other men, as evidenced by Epstein's alleged sex parties or Trump laughing it up on the 2005 recording with "Access Hollywood" host Billy Bush.

The #MeToo movement has done a lot to expose the realities faced by all too many women in the workplace and elsewhere from men who are eager to use their social and political power to harass, terrorize and assault women. But there's still a tendency to view this kind of male behavior as if it stems from an excess of horniness -- as if the male desire for sex overrides pedestrian concerns like consent.

The result is that far too many people treating the solution as a matter of policing sexual desire and keeping men away from women, a "solution" that only punishes women more by depriving them of work opportunities and a normal social life.

In the same week that the judge ruled against Epstein and Acosta and Robert Kraft was arrested, the Trump administration quietly released a new rule meant to cut off contraception and safe abortion for low-income women. This rule, which defunds any contraception clinic that offers abortion referrals or shares organizational structures with abortion clinics, is of course being spun as "pro-life." In truth it's about using bureaucratic red tape to shut down clinics like Planned Parenthood that make contraception available to women who often have no other access to it.

Trump was doing this at the same time that he made excuses for his buddy Kraft's behavior, saying that the arrest was "very sad" and that Kraft has "proclaimed his innocence." (Trump uses this line often, showcasing his conviction that reality should be determined by what powerful men say it is, not by factual evidence.)

The contrast between these seemingly unrelated stories is sobering: Wealthy men accused of abusing women sexually get Trump's sympathy,  but low-income women who want to have healthy, consensual sex are being punished. It's a glimpse into the world that Trump is trying to create, where the privileged can do whatever they want and be as cruel as they want, while everyone else is literally deprived of even the basic right to bodily autonomy.

This is why it's impossible to separate economic and social issues, despite the pressure from some corners of both the left and the center to abandon "identity politics." This is why the hyper-rich resist redistributive policies such as higher marginal tax rates or a wealth tax. At a certain point, you can't really buy any more fancy cars or houses or paintings. But what immense wealth does buy is power.