If the Oscars wanted to honor a progressive movie, they should have chosen "Black Panther" over "Green Book" 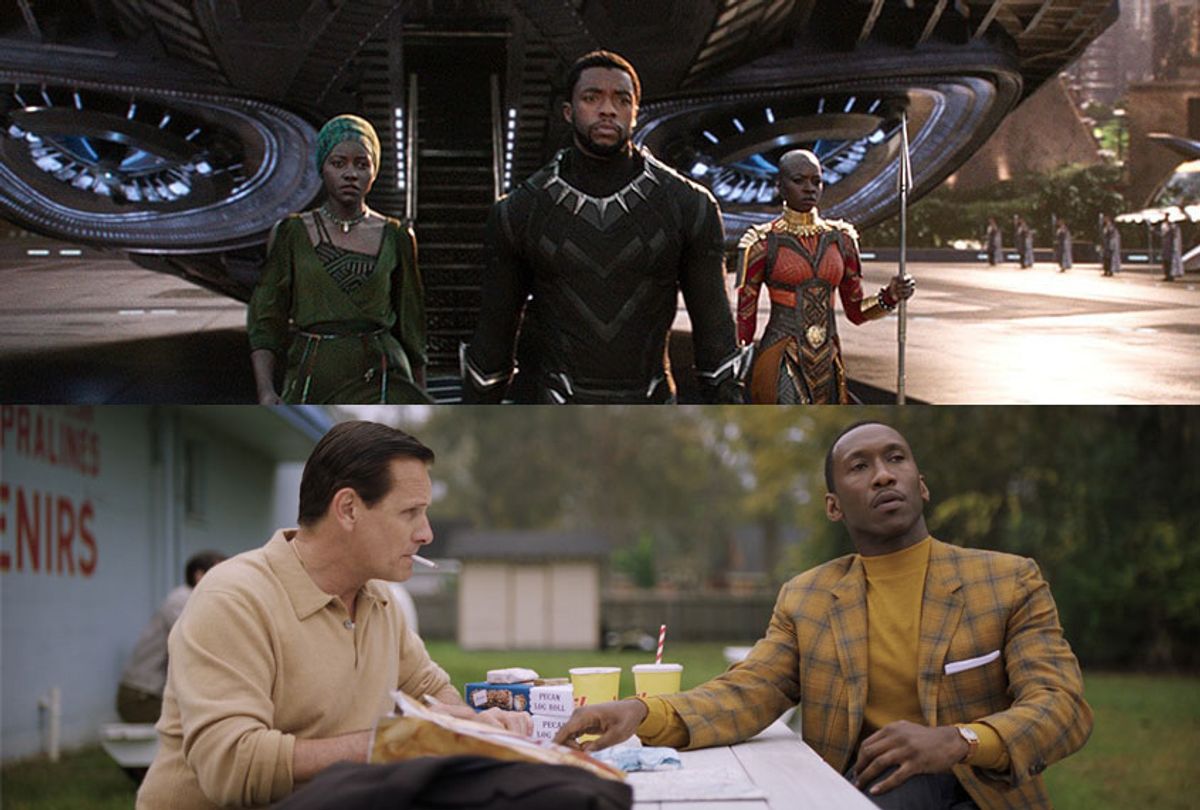 There are other movies which could have conceivably won the Academy Award for Best Picture without it being an injustice to the Marvel movie, even though I personally chose it as the best film of 2018. "BlacKkKlansman" was another movie that had interesting and powerful observations about racism and white supremacist ideologies in the United States, while "Vice" was a sly and darkly comic look at the power structures that keep extreme right-wingers in charge of our political institutions. Either one of those could have been chosen as a commentary on the world we inhabit without seeming like an insult to the intellect.

That said, if the competition is solely between "Black Panther" — the highest domestic grossing film of 2018 as well as the first superhero movie to receive a Best Picture nomination — and "Green Book," then there is no question that the fantastical adventure with domesticated rhinoceroses and a secret magic kingdom is smarter and more relevant than the movie chosen by Oscar voters as the year's best.

Part of the reason for this lies in the sophisticated political perspective at the core of the "Black Panther" plot. The battle between the titular hero Black Panther/T'Challa (Chadwick Boseman) and his nemesis Killmonger (Michael B. Jordan) is an ideological one: Both openly acknowledge the long history of racism, colonialism and economic exploitation that has oppressed marginalized peoples throughout the world for centuries, but they have drastically different ideas about how to rectify the problem.

"Killmonger seems to embody the tradition of Black Nationalism and revolutionary politics," Professor Saladin Ambar of Rutgers University told Salon shortly after the film's release last year. "He is more in the line of Martin Delany, Marcus Garvey, and Malcolm X than Frederick Douglass, (the early) W.E.B. Du Bois, and Dr. Martin Luther King Jr. It's essentially a philosophy responsive to the intractability of white racism and supremacy — and as such, it argues for forms of racial exodus or armed struggle."

By contrast, Ambar pointed out that "the Wakandans' conservatism had been rooted in self-preservation and their own anti-colonialism. When that policy no longer became tenable, the tactics changed, and I think this is historically important."

Ambar helped illustrate the juxtaposition between the two characters as thinkers by comparing T'Challa to King and Killmonger to Malcolm X.

"Dr. King, for example, is a far more radical figure in 1967 and 1968 than in 1957 and 1958," Ambar explained. "We needn't pit King against Malcolm X — just look at the evolution of both figures as a window into how broader forms of black politics change. The two views are not necessarily antithetical, but rather reflective of particular strategies and political moments. I believe the film honors this."

This isn't to say that politics alone make "Black Panther" a better movie than "Green Book." The Ryan Coogler-helmed film also works as an exemplary execution of its genre, from the stunning visuals and thrilling action set pieces to its larger role in the Marvel Cinematic Universe saga. Yet because "Green Book" openly touts itself as a progressive film about race relations — the kind of movie that exists to make white people feel like they've learned something about America's dark white supremacist past — the fact that its story is so simplistic works against it in a major way.

I had an unexpected opportunity to discuss the impetus behind "Green Book" with director and co-writer Peter Farrelly back in October. Although I had called him for an interview about a different movie, "CinemAbility," he initially believed I was talking about "Green Book" and — in his fast-paced, cheerful and charmingly open way — rattled off a lot of information about why he took on that project before I corrected him about the purpose of our call.

"It was three years ago when I bumped into Brian Currie, one of the writers who’s a friend of mine," Farrelly told Salon. "He’s an actor too. I said, 'What are you doing?' He said, 'I’m writing a screenplay,' and he told me the story about this black concert pianist named Don Shirley who lived above Carnegie Hall in 1962. His record company was sending him on a tour of the south. He was afraid to go so he hired an Italian-American bouncer from the Copacabana in New York City to drive him. That guy was pretty racist himself."

He added, "Right away I said, 'That’s a home run man.' He goes, 'Really?' I say, 'It’s a f**king home run. You've got to make that movie.' I kept thinking about it. For a couple of months, I’d be driving along thinking, 'I wonder how that script’s coming?' Because I didn’t know him as a scriptwriter and I didn’t know how he would do it. Finally, after two months I called him and said, 'Hey, how’s that script coming?' He says, 'What script?' I said, 'The script you told me about.' He asks which one. I said the one about the black concert pianist and the bouncer. He goes, 'Oh yes. We haven’t started that.' I was like, 'Can I write it with you? I love this idea.' He said, 'Really?' I said, 'Yes. I’d love to write it with you.' We started the following Monday."

An enthusiastic and well-intentioned but ultimately clichéd approach is abundantly evident in the final product, which tidily fits into a traditional white savior narrative, in which the tale of an oppressed individual's hardships matters because of how it can help a racist complete his or her own character arc. "Green Book" has more interest in the story of the bouncer Frank "Tony Lip" Vallelonga (Viggo Mortensen) than it does in that of Don Shirley (Mahershala Ali), the musical genius who braved touring the Jim Crow South in the hope that music could open people's minds. (Ali's win for the Best Supporting Actor Oscar, rather than Best Actor, says it all.)

While "Green Book" has its charming moments, the underlying politics are simplistic at best. Dr. Shirley exists in that story for little purpose other than to help audiences feel proud of Tony Vallelonga as he overcomes his own prejudices; we see very little of Shirley's own internal anguish, hopes or fears, except when they serve Vallelonga's narrative. Even worse, the movie offers no fresh insights into the structural inequalities that would force a brilliant pianist to fear for his life simply for wanting to go on a concert tour. Instead it goes for the easy out, characterizing those who perpetuate racism as cartoonish baddies so that audience members can leave the theater utterly confident that they would never be part of an oppressor class.

One could walk away from "Green Book" thinking that the way to end racial prejudice is for enough benevolent white people to slap around the bad guys and give impassioned speeches about other people's lived experiences. "Black Panther," by contrast, uses the superhero genre as an allegory for the very real political debates that have existed for generations about how marginalized groups — whether African Americans here or anyone, anywhere, who faces oppression — can best empower themselves and achieve justice.

If the Oscar voters had wanted to promote that kind of progressive movie, "Black Panther" was a far, far better choice than "Green Book."