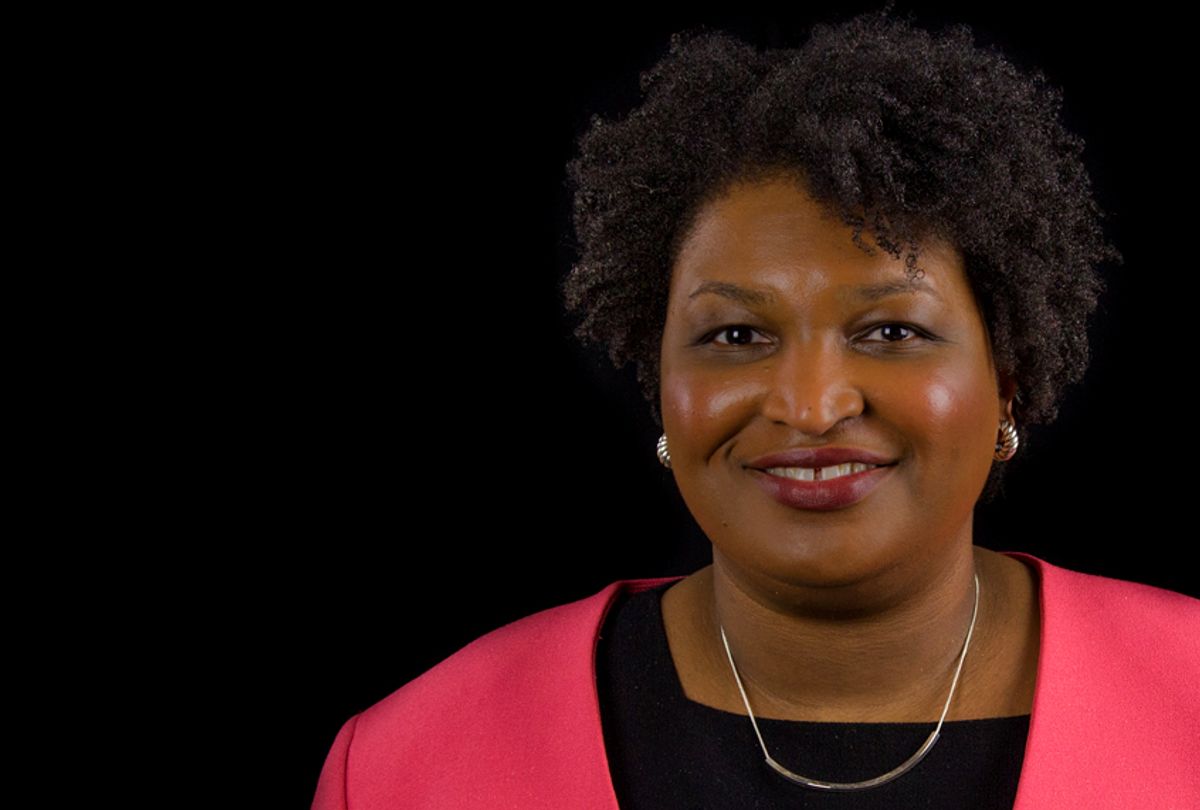 Ever since last November’s elections, Georgia Democratic gubernatorial candidate Stacey Abrams has tried to lead a national conversation about voter suppression. But in an unnoticed speech at last week’s meeting of the Democratic National Committee in Washington, Abrams did something that is rarely heard in her interviews, television appearances and congressional testimony.

Abrams discussed her campaign’s achievement attracting legions of infrequent voters. She described the tone that she took when speaking to voters across Georgia’s polarized electorate. And Abrams said in stark terms why voter suppression is as insidious as it is persistent — and why democracy proponents face a harder task than an opposition seeking to undermine voter registration, ballot access and counting every vote.

In short, Abrams offered a turnout template and a moral compass for many Democrats running in 2020, while at the same time elucidating voting rights challenges.

“We accomplished extraordinary change in Georgia,” Abrams began. “In 2014, 1.1 million people voted on the Democratic side of the table. In 2018, 1.2 million African-Americans cast their ballots for me. We tripled the voter turnout rate among active non-Latinos. We tripled Asian Pacific Islander voting rates. We increased youth participation rates by 139 percent. . . And when people got afraid that my identity politics was going to cost me the white vote, I am proud to announce that I received a higher percentage of white voters than anyone since Bill Clinton in the state of Georgia.”

Abrams officially lost by 55,000 votes in an election where her opponent was the senior state official overseeing the election’s rules and counting protocols. She has since formed a new voting rights organization, Fair Fight Action, and filed a major federal lawsuit seeking to reverse the features of Georgia’s election code that harm voters through no fault of their own. Abrams said she that did not regret how she ran her 2018 race.

“I do not regret a thing I said. I do not regret the campaign I ran,” she said. “More than once I’ve been asked, well, what would you do different? And I say this: the campaign that we ran, we turned out 1.9 million voters, 800,000 who had never thought about voting in a midterm election. We turned them out in communities where they had never seen a candidate. And we did it in a way that treated them with authenticity and respect; that valued their voices and gave them a real choice in this election — and it worked — except for voter suppression.”

Abrams detailed how a litany of intentional administrative barriers thwarted her base at key stages of the process — voter registration, ballot access and counting votes. But first she described how she intentionally talked to her state’s voters, no matter their partisan affiliation or agenda, which she said was key to prompting them to vote.

“What we proved in Georgia is that if we talked to everyone like we cared, if we value every voter, if we tell the truth and we tell it no matter where we are, we can win,” said Abrams. “We are the only campaign that I know of that was both on urban radio and on country radio at the same time with the same message. We were the first campaign to launch a bilingual canvas. We put our walk cards [given to volunteer door knockers] in seven languages, which in Georgia is a lot. We did the work of reaching out to every community and we did it with intention but we also did it with investment.”

It sounds simple — talk to people, show respect, listen to concerns and be consistent with your beliefs and stances. But those postures are not what’s modeled by the White House, many Republicans emulating the president and even some Democrats drawn to extreme messages and headline-grabbing tactics. In short, Abrams urged Democrats to connect with voters by meeting them where they live and validating their concerns.

“We raised $42 million in the state of Georgia. We did this at a time when people were telling us that we were spending our money in terrible ways,” Abrams said. “When the pundits saw our reports every month they were shocked that we were spending so much money talking to voters. They thought we should be saving our money for television. I wanted to win, so I figured I should talk to voters. I even talked to voters who were not going to vote for me. I just didn’t spend all of my time there.”

“I talked about issues that we were not supposed to talk about,” Abrams said. “I talked about gun safety in north Georgia. And if you know anything about north Georgia, that was not the thing to do. I was literally at a gun auction and talked about gun safety issues. Because I could tell them, ‘Look, I know how to shoot. My great-grandmother taught me. But I know the person responsible is the person holding the gun. I don’t want to eliminate the Second Amendment, but I do want everyone’s amendments and everyone’s rights to be respected.’ . . . We have to understand that we can talk about difficult things without changing what we believe. But we have to be respectful of what they believe. And that respect has to be truthful and honest.”

But just as Abrams described how she worked to bring people into the process, she said her opponent, Republican Secretary of State Brian Kemp, was working to keep people from participating throughout the process. And what made Kemp’s effort so insidious was that his efforts were legal even as they were immoral — the two most crucial and identifying features of voter suppression.

“My opponent was not only a contestant, he was scorekeeper and the referee,” Abrams said. “Here’s the thing about voter suppression. Voter suppression is legal in the United States right now. We’re used to fighting against enemies that are supposed to be unlawful, but the problem with a lot of what they do is they take legal actions and bastardize them and manipulate them until the rights they’re supposed to protect are no longer visible. The insidious nature of voter suppression is that it looks normal.”

Abrams said most Republican suppressive tactics begin by citing a fabricated menace — people impersonating other voters — as a pretext to over-police and impede the process.

“We know voter fraud is a [partisan Republican] myth,” she said. “But they talk about it so frequently that some of us actually believe it’s the truth. We have a hard enough time getting 55 percent of the people to vote. Who has enough time to do it three times?

In contrast, there are real-life impediments that Republicans in Georgia and otherwise purple states put in the way of legal voters, especially in communities of color and other blue-leaning constituencies.

“What we do know is that in the state of Georgia, poor black men and women stood in line for four hours to cast a vote [last fall]. That’s a poll tax,” she said. “When you have to sacrifice four hours of work, on the off chance that you make it through and get to cast a ballot, that’s a poll tax. We know if you were a person who is a naturalized citizen, you were lucky if you got to get your ballot, because we had a secretary of state who siphoned off naturalized citizens to ensure they never got registered in the first place.”

“We have to understand that voter suppression is about a system of action,” Abrams said, framing the big picture. “It is about registration access: who gets to get their names on the rolls. And whether you are in Texas where they try to stop third parties from helping you, or Ohio where they take you off as soon as you get on, registration access is part of it.”

“It is also about ballot access,” she continued. “Once you get on the rolls, if you can stay there, you’ve got to be able to go and vote. When they move your polling place in Missouri to the outskirts of town without public transit, you can’t vote. Or when they put it on the top of the hill and it’s the only one, and you can’t get there because you don’t have a car, it doesn’t matter if you have the right to vote. If your absentee ballot never arrives in the mail, you don’t have any access to the ballot. And then there’s getting your vote counted and I just call that Florida.”

Abrams, who is expected to run for U.S. Senate from Georgia in 2020, cited examples from other states. But she kept returning to her home state, which last fall became the leading example of virtually all of the modern forms of voter suppression in the U.S.

“We know that in the United States of America if you are legally eligible to vote, every vote should be counted — but it doesn’t,” she said. “That’s why in Georgia we had people who proudly stood in line for four hours, but got inside and were told they ran out of paper. We have [all] electronic [voting] machines — and they ran out of paper. We had places where people were told to file provisional ballots when they should have been given emergency ballots. And most of these things were not unlawful.”

These examples may be recent, but she said voter suppression was as old as America.

No matter what happens with Abrams’ lawsuit, no court will force a do-over election or make her governor of Georgia. But not only did Abrams’ remarks remind Democrats from across the country why voter suppression is so insidious, but she also described how she ran a campaign that motivated multitudes of infrequent and underrepresented Georgians to vote — a historic accomplishment and template for 2020 across America.