A beaching in the Amazon jungle marks another recent example of leviathans acting funny. What could it mean? 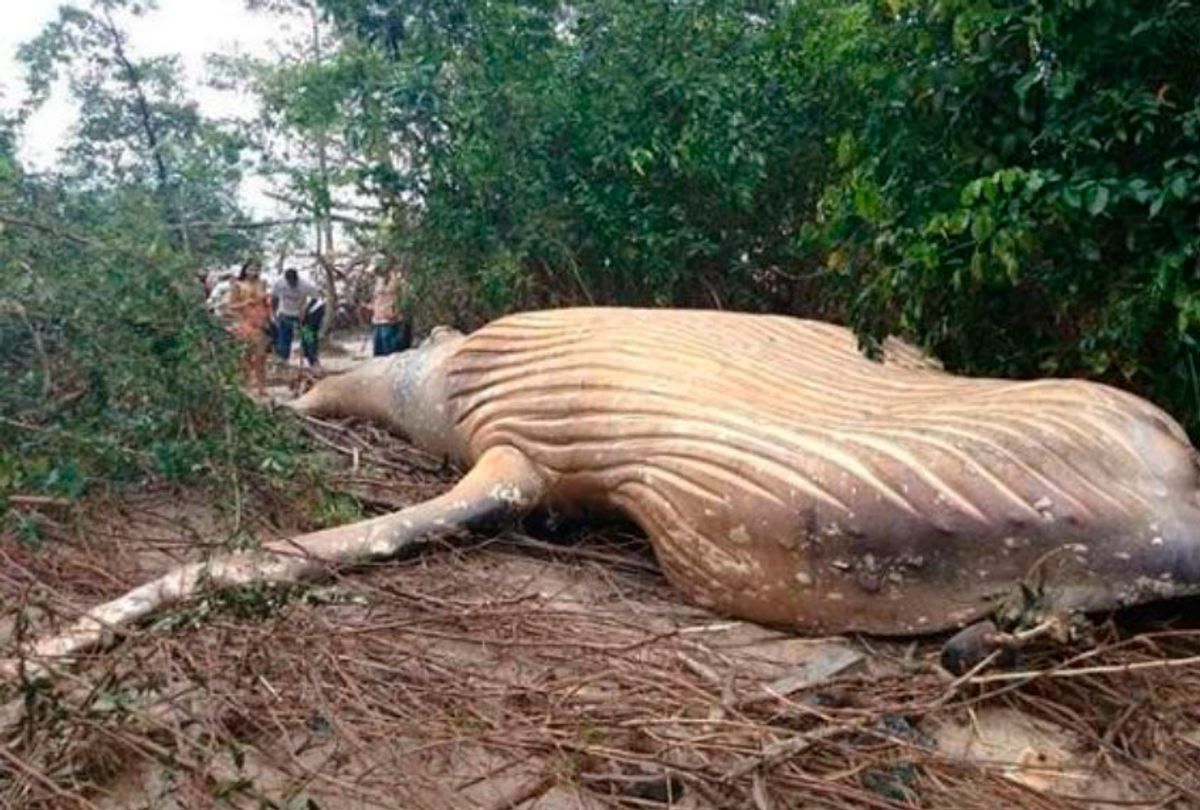 An image of the humpback whale in the Amazon Jungle. (Instagram/bicho_dagua)
--

Marine biologists in Brazil are probing a bizarre marine life incident in which a dead humpback whale was found 50 feet ashore on an island in the Amazon River. The whale was discovered on Friday. At this time of year, humpbacks are generally eating krill in Antarctica, thousands of miles south.

The Brazilian conservation non-profit Bicho D’Água discovered the whale after noticing vultures were circling a mangrove on the island. The whale was beached in an area that was difficult to access on foot, nearly 50 meters from the beach. Experts tell local media that it could be a result of the high tides the area has experienced over the last few days. Necropsy of the carcass and other samples are being collected to help researchers and scientists accurately determine the cause of death.

Biologist Renata Emin told the Brazilian news site G1 that the whale's beaching was particularly unusual not because of its distance from shore, but rather the time of year the whale was found. The humpback whale was about 26 feet long, about half the length of a full-grown adult, and is thought to be a calf who lost its mother while migrating.

“We imagine it was floating and the tide took it into the mangrove,” Emin told G1 in an interview conducted in Portuguese. “The question is, what was a humpback whale doing in the month of February on the northern coast of Brazil? It’s unusual.”

The calf's beaching is one of many recent cetacean oddities happening in our oceans. In 2017, humpback whales in South Africa were discovered to be forming “super-groups,” a peculiar behavior for marine mammals who are reputed to be solitary. Meanwhile, since January 2016, an increased number of humpback whale mortalities have occurred from Maine through Florida, leading the National Oceanic and Atmospheric Administration (NOAA) Fisheries to declare an “unusual mortality event." According to recent data, 50 percent of the humpback whale mortalities that occurred along the Atlantic coast from Maine through Florida between 2016 and 2019 had evidence of human interaction — for example, a ship strike or entanglement.

Entanglement and ship collisions both pose big threats to all whales.  According to the International Whaling Commission, an estimated 300,000 whales and dolphins die after entanglement each year. Humpback whales around the Western Antarctic Peninsula have experienced high pregnancy rates as of late, a positive development after centuries of whaling.

Likewise, some whale populations might be experiencing populations increases due to conservation efforts. Still, there are other risks that stand as a threat to cetacean existence, such as climate change. Warming waters are impacting the food supply for whales.

“Temperature change may directly influence the distribution of whales, and then you have ocean acidification, which can affect the food chain and habitats of their prey,”  Natalie Barefoot, executive director of conservation nonprofit Cet Law, explained to Scientific American. “Whales are highly mobile creatures, so if climate change causes the prey to move, they will probably follow them. Then there’s the increased competition that comes about as surface temperatures change and species move to different habitats — all of a sudden, you have different species using the same area, so there’s more competition.”

Interestingly, whales play a role in carbon absorption on Earth. Their movements push nutrients from the bottom of ocean floors to plankton, which suck up carbon, and their feces produce fecal plumes.

“In other words, pooing,” Barefoot said, “also introduces nutrients that create marine plants in the area. These plants use photosynthesis, which absorbs carbon, thus enhancing the carbon capture process.”