If Democrats really want answers about the birth of the Russia scandal, then George Papadopoulos is the man to ask 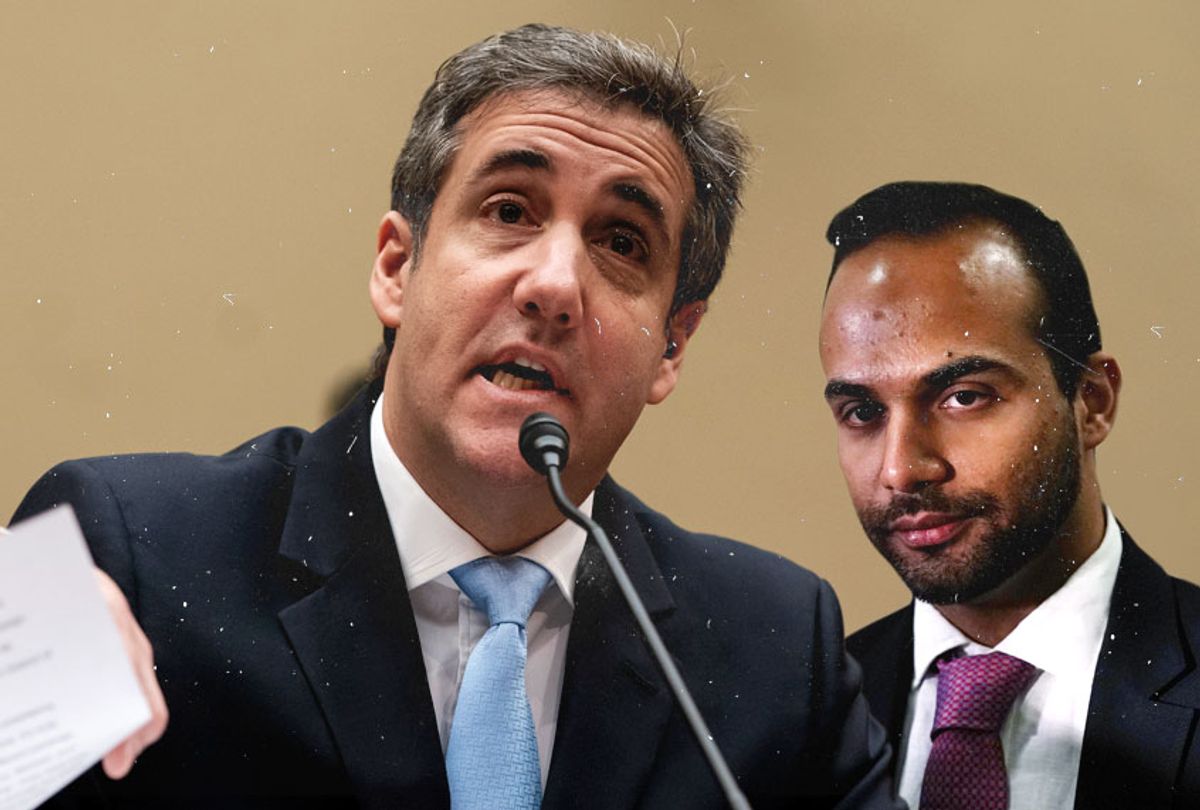 Michael Cohen spent Wednesday on Capitol Hill like a bobblehead doll, alternately taking swats from Republicans and kisses from Democrats during his testimony before the House Oversight Committee. He was sorry that he had lied to Congress; he was sorry for the crimes he had committed; he was sorry that he had devoted ten years of his life being loyal to the likes of Donald Trump. But when it came right down to it, he didn’t tell us much more than we already knew about Donald Trump. He described him as “a racist, a con man and a cheat.” Whoop de doo. The Democrats didn’t even manage to ask him why he had left out “congenital liar.”

Listening to Cohen stumble through his testimony — he had to be told what “chilling effect” meant in a question about Trump’s use of non-disclosure agreements — you had to wonder why the Democrats called him at all. He provided only two pieces of information to the committee that could arguably be called smoking guns: a check for $35,000 signed by Donald Trump he claimed had been part of Trump’s repayment of the hush money he paid Stormy Daniels; and a brief description of a phone call he listened in on between Trump and Roger Stone, during which Stone told Trump he had just talked to Julian Assange about a big cache of Democratic Party emails that WikiLeaks was about to dump.

We already knew that Trump had repaid Cohen for the Stormy Daniels hush money, and we knew Stone was doing everything he could to serve as a cut-out between Trump and Assange.

You have to wonder why the Democrats didn’t call someone who could actually tell them stuff they hadn’t heard before — someone like George Papadopoulos.

Papadopoulos, you say? Yes. You have to go back and read what I would call the origin documents of the Russia investigation to understand how important that the frequently belittled “coffee boy” Papadopoulos was to the Trump campaign. The origin documents are the indictments handed down by Special Counsel Robert Mueller of the 25 Russians involved in helping to steal the election from Hillary Clinton. These were the people who actually carried out the crimes that constitute interference with the election of 2016.

Mueller indicted 13 Russians from the so-called “Internet Research Agency” in St. Petersburg, Russia, for participating in a $1.25 million a month campaign begun in 2014 to flood Facebook, YouTube, and Instagram with pro-Trump, anti-Hillary propaganda. He indicted 12 Russians working for the Kremlin intelligence agency, the GRU, for actually hacking into and stealing emails from the Democratic National Committee, the Clinton campaign, and Clinton’s campaign manager, John Podesta. The actions taken by Russian intelligence to hack into the Democrats’ emails began in early March of 2016, according to the indictment.

What was happening in early March in Donald Trump’s campaign, before he had captured the Republican nomination? Why, George Papadopoulos was angling for a position on the Trump campaign, and what do you know, but on March 6, he got it! He was notified by the Trump campaign co-chairman, Sam Clovis, that he had been picked as one of the campaign’s “foreign policy advisers.”

Papadopoulos didn’t waste time. Exactly one week later, Papadopoulos was in Rome having breakfast with “Professor” Joseph Mifsud, a shadowy figure with Maltese citizenship who was then serving as the director of something called the London Academy of Diplomacy. Mifsud, whose job was in London, just happened to be in Rome, and just happened to run into George Papadopoulos, and just happened to show great interest in him when he learned that the young man held a position on the Trump campaign. What do you know! One coincidence after another!

I learned a long time ago when I was a young man working as a reporter in Beirut, Lebanon, that when you start repeatedly encountering older men who show an unusual interest in you, it’s not a coincidence. In capitals like Beirut, Vienna, Athens, and Rome, usually those encounters mean you’ve just met up with an agent of a foreign nation who is gathering intelligence, and they think you can serve as a source of information, or even as an unwitting “asset,” to use intelligence parlance.

That’s what happened to Papadopoulos, because what do you know but two weeks later, after Trump had identified Papadopoulos to the Washington Post as one of his “foreign policy advisers,” Mifsud managed to run into him again 1,200 miles away in London, where he introduced him to a comely young Russian friend of his, Olga Polonskaya, who he said was Vladimir Putin’s niece and had connections high up in the Kremlin. Wow! Another coincidence!

On the same day, Papadopoulos sent an email back to Trump campaign headquarters telling his boss he had the connections to set up a meeting between Trump and “Russian leadership — including Putin.”

A week after that, Papadopoulos was in Washington at a meeting with Trump and Jeff Sessions, supposedly Trump’s top foreign policy adviser, telling them he could set up a meeting with Putin and listening to Trump answer, “Interesting. Go do it.”

In yet another coincidence, Papadopoulos was back in London a week later  meeting with “Professor” Mifsud and Ms. Polonskaya about a meeting between Trump and Putin.

About a week after that, Mifsud put Papadopoulos in touch by email with Ivan Timofeev, director of a Kremlin-funded “think tank” called the Russian International Affairs Council. Just between you and me, “think tanks” like this one in countries like Russia are fronts for Russian intelligence.

One week and one day after first emailing Ivan Timofeev in Moscow, in yet another coincidence, Papadopoulos happened to have breakfast with “Professor” Mifsud in a London hotel. Mifsud informed him that he had just returned from Moscow where he had coincidentally met with senior Russian government officials who told him that the Russians had “dirt” on Hillary Clinton in the form of “thousands of emails” which they could disseminate against her.

So, it’s now April 26, 2016, just two months after young Papadopoulos joined the Trump campaign, and according to the Mueller indictment of the GRU agents, about two months after the Russians began their attempts to hack the Democrats’ emails, and what do we have? Why, we have yet another coincidence! Young Papadopoulos’ new friend, “Professor” Mifsud, is just bubbling over with this wonderful news that the Russian government has a bunch of emails they’ve stolen from the Democratic Party that they are willing to make use of to help elect Donald Trump president!

Less than a month later, Papadopoulos would get drunk in yet another convenient London hotel and blab to Australia’s top diplomat in London that the Russians had “dirt” on Hillary Clinton they were going to use against her to help Donald Trump. The Australian, Alexander Downer, would soon get in touch with the FBI and inform them of his contact with tipsy young Papadopoulos, which would begin the process which would end up opening a counterintelligence and criminal investigation of the Trump campaign.

And what did all of us back in the good ole U.S.A. know while all of this was going on? Nada. Zip. Zero. Nothing. Bupkis.

The Trump campaign didn’t report any of these contacts with obvious foreign agents like “Professor” Mifsud and “Putin’s niece.” Young Papadopoulos may have been flapping his jaws to random Australians drinking in London hotel bars that he was in contact with Russians offering to help the Trump campaign with stolen emails, but he wasn’t telling us. The FBI was in possession of knowledge that a hostile foreign power was interfering in the American presidential election on behalf of Donald Trump, but they didn’t tell us.

Don’t you think ole Loose Lips Papadopoulos has a little something he might be able to share with the House Oversight Committee about the main crime that was committed in the 2016 election: the Russian hacking of the Democrats’ emails and the aid they gave to Donald Trump’s election for president? Don’t you think the good Democrats we voted for in 2018 to ride herd on Donald Trump might have a few questions for Papadopoulos? Like maybe, what the hell were you doing in Rome in March of 2016 after you joined the Trump campaign? How the hell did you meet up with this Maltese falcon, Joseph Mifsud? How did you happen to meet up with him again in London? What the hell were you doing emailing Russian power-meisters like Ivan Timofeev?