With Medicare for All actually heading for a vote in Congress, progressive groups prepare for a long fight 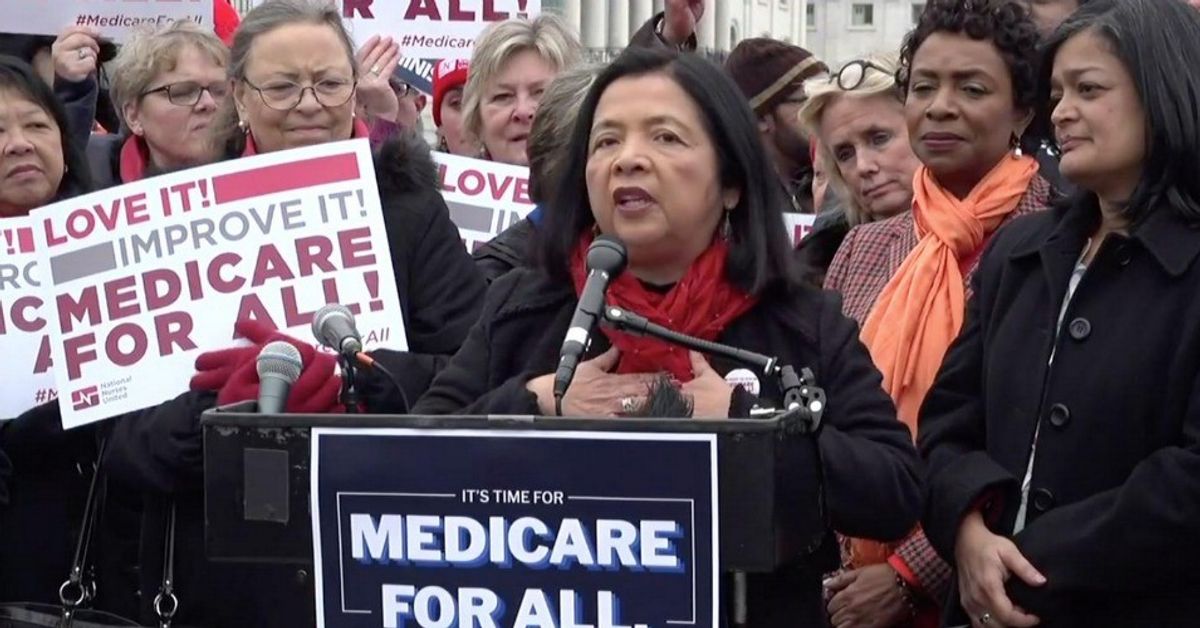 With Rep. Pramila Jayapal, D-Wash., and more than 100 other House Democrats standing behind sweeping new Medicare for All legislation, advocates on Wednesday immediately mobilized to pressure lawmakers to pass the bill.

On Capitol Hill, leaders of National Nurses United unveiled their plan to initiate more than 1,500 local canvassing operations across the country to continue building grassroots momentum — tapping into the growing demand for Medicare for All among the public.

"We will continue building our Medicare for All movement. Neighbor by neighbor. Conversation by conversation, as this bill moves forward," said NNU executive director Bonnie Castillo. "And in honor of those who paid the price in an unfixable, immoral system we will win Medicare for All."

The Medicare for All advocacy blitz will include canvassing and phone banking campaigns, and follow more than 150 barnstorms organized by NNU earlier this month. Organizing efforts are currently scheduled throughout throughout the month of March and into April.

"The launch of today's bill is a monumental achievement in its own right," wrote NNU in an email to supporters. "Just a few years ago, Medicare for All was viewed as little more than a far-away dream. Virtually zero legislators supported it, and even fewer had the courage to add their name to any bills publicly.

"But that didn't deter us. We've rallied and fought tirelessly — fueled by the belief that healthcare is a right, not a privilege — and now Medicare for All is supported by the majority of voters, the majority of Congressional Democrats, and the majority of 2020 presidential candidates," the group continued. "That's proof that our work is paying off. And this bill is our next big test."

Recent polls have shown that support for Medicare for All has grown rapidly in recent years. Seventy-one percent of Americans approved of the proposal, according to a survey by Reuters last year, compared with a 2009 CBS/New York Times poll which found that only 59 percent of the public backed the idea.

Support has climbed as reports on the effects of the for-profit insurance system on American families have become more and more prevalent. NPR reported Tuesday on a recent study that showed 42 percent of Americans who were diagnosed with cancer between 2000 and 2012 drained their life savings within two years, as astronomical bills for tests and treatments piled up.

Leaders of National Nurses United, which has been fighting for Medicare for All since the group's inception more than a decade ago, gathered with the bill's sponsors on Capitol Hill as they announced the proposal.

"Here's the thing, if we can end slavery, if we can give women the right to vote, if we can send a man to the moon then God, we can do universal health care for every American!" said Jayapal.

The Democratic Socialists of America (DSA) also offered their endorsement of the proposal on Wednesday and announced their own nationwide mobilization to ensure the bill advances through Congress.

On Thursday, DSA will kick off a tour featuring longtime Medicare for All advocate and expert Michael Lighty, who will discuss "the urgency of the moment" with supporters.

"This is a milestone in the fight for universal health care and an equitable society, where working people make the decisions that determine our destiny," said Lighty. "Now our task is to build a mass organization of working people that will not give up until we win."

The groups' mobilization comes as the for-profit health insurance industry — and its defenders in Congress — are preparing to launch their own fight to maintain the status quo, instead of transforming the U.S. medical system into one resembling those of other developed countries where health care is considered a right.

"Don't forget, when we established Social Security, Medicare and unemployment insurance, our opponents said it was too hard, they said it was too difficult. Today is not going to be any different. You're going to see probably hundreds of millions of dollars flowing in to try to kill this bill, trying to pit us against each other, telling us that it is too expensive or that you're going to give something up," Jayapal said.

"But we are ready. We can do this as long as every single person across America stands with us to organize, to fight, and to demand health care as a human right," she added.