Did we learn anything new? Only that our president is likely a criminal and our democracy is close to failure 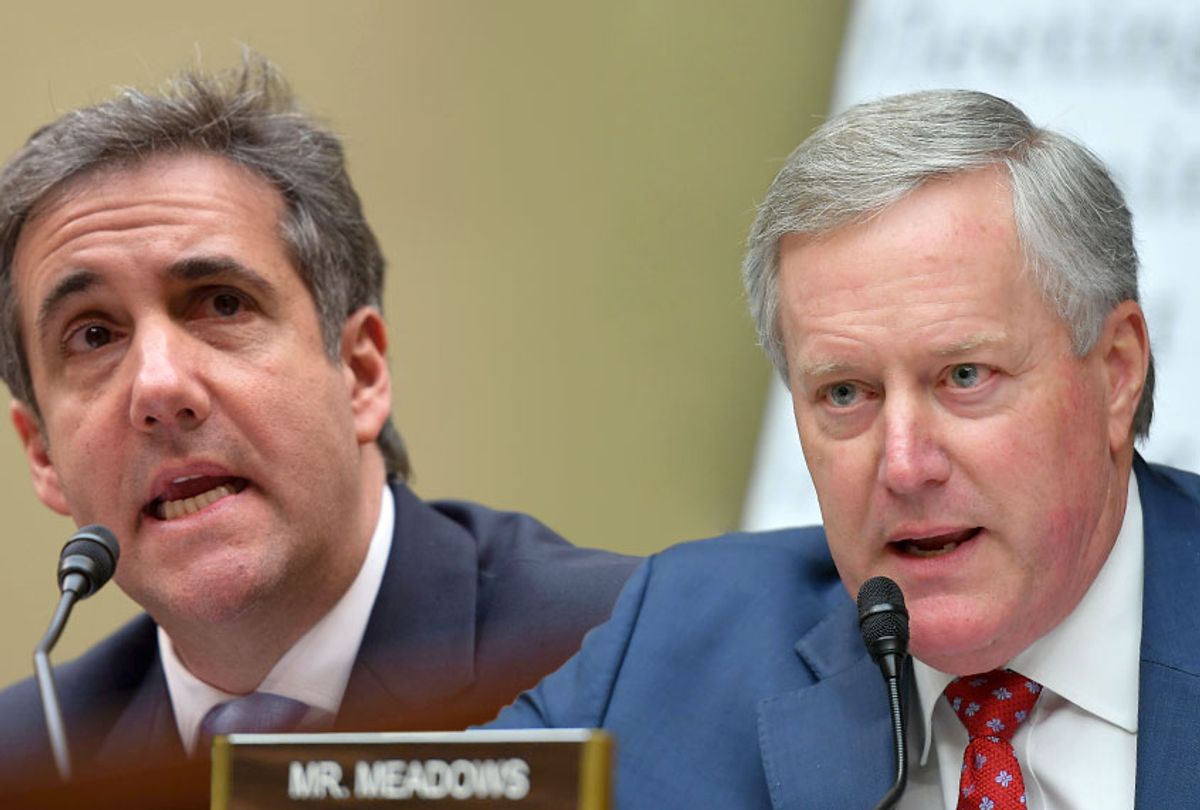 On Wednesday, Donald Trump's former attorney and personal fixer, Michael Cohen, testified before the House Oversight and Reform Committee. With his seven hours of testimony another chapter has been added to what feels like a badly written movie but is instead all too real. This new chapter in the TrumpWorld melodrama does nothing to alter the overall story.

Cohen's testimony was part courtroom drama, and part Mafia movie, with an unreliable narrator who is telling (mostly) the truth as he sees it. It is "Idiocracy" meets "Goodfellas" and "A Few Good Men," with elements of "The Manchurian Candidate" and "Mr. Smith Goes to Washington" -- except that Cohen is not noble, selfless or naive. Instead he is a weak and corrupt person who chose to do the bidding of an even worse one.

Cohen's hearing also borrowed from another genre as well. Conventional Hollywood's romantic comedies have often included the "best black friend" who is the emotional surrogate for the main character, likely a white woman. Other Hollywood films also feature the "magical Negro" character, whose sole purpose in the story is to solve white people's problems.

Rep. Mark Meadows, R-N.C., head of the right-wing House Freedom Caucus, followed this script by having Lynne Patton, a black woman who serves under Ben Carson in the Department of Housing and Urban Development, act as a professional "best black friend" and human shield for Donald Trump. Patton stood there in evident discomfort, straight out of Black Conservative Central Casting, in a vain effort to deflect attention from the (obvious, true and numerous) charges that Donald Trump is a racist.

Cohen's testimony occurred while Donald Trump was overseas in Hanoi, continuing his "bromance" with North Korean dictator Kim Jong-un, a person who could easily be the lead villain in a second-rate James Bond film.

Considered in total, this spectacle is an example of what philosopher Peter Gordon describes in "The Authoritarian Personality Revisited: Reading Adorno in the Age of Trump":

Trumpism, though it masquerades as society’s rebellion against its own unfreedom, represents not an actual rebellion but the standardization of rebellion and the saturation of consciousness by media forms.

If [Theodor] Adorno was right, then Trumpism cannot be interpreted as an instance of a personality or a psychology; it would have to be recognized as the thoughtlessness of the entire culture. But it is a thoughtlessness and a penchant for standardization that today marks not just Trump and his followers but nearly all forms of culture, and nearly all forms of discourse. The eclipse of serious journalism by punchy soundbites and outraged tweets, and the polarized, standardized reflection of opinion into forms of humor and theatricalized outrage within narrow niche-markets makes the category of individual thought increasingly unreal. ...

The new media forms have devolved into entertainment, and instead of critical discourse we see the spectacle of a commentariat, across the ideological spectrum, that prefers outrage over complexity and dismisses dialectical uncertainty for the narcissistic affirmation of self-consistent ideologies each of which is parceled out to its own private cable network.  Expression is displacing critique. ...

This, I think, is why the phenomenon of Trumpism remains so difficult to comprehend. As Adorno recognized long ago, there is a kind of artifice to this rebellion that belongs less to what we used to call political reality than it does reality television.

There are theoretical physicists and philosophers who argue that what human beings perceive to be reality may all be an elaborate computer simulation devised by super-intelligent aliens -- from our point of view, effectively gods. If that is correct, with Cohen's testimony on Wednesday whoever is running this version of reality has now added every story cliché to the program.

Did Cohen share any new groundbreaking information? Not really. The only significant revelation he offered was that Trump may be the target of an additional investigation by prosecutors in the Southern District of New York, the precise subject of which is not clear. Cohen also claimed that Donald Trump paid him by check while president to reimburse hush money Cohen had paid made to adult film actress Stephanie Clifford, aka Stormy Daniels.

For the most part Cohen confirmed what is already known about Donald Trump: He is violent, racist, a misogynist, dishonest and likely a criminal.

Cohen delivered at least one great line with his warning to the Republicans in the hearing room and anyone else who remains loyal to Donald Trump:  "I'm responsible for your silliness. I did the same thing that you're doing now for 10 years. I protected Mr. Trump for 10 years. I can only warn people, the more people that follow Mr. Trump as I did blindly are going to suffer the same consequences that I’m suffering."

My loyalty to Mr. Trump has cost me everything — my family's happiness, my law license, my company, my livelihood, my honor, my reputation and soon my freedom. ... Given my experience working for Mr. Trump, I fear that if he loses the election in 2020 that there will never be a peaceful transition of power. ... And this is why I agreed to appear before you today.

How did the Republicans on the Oversight Committee behave? Horribly, which was as expected. They seem to have discovered moral outrage towards liars while defending and valorizing Donald Trump, a man who has lied at least 8,000 times since becoming president. At no point did any Republican members even try to contradict any of Cohen's major claims about Donald Trump's behavior and involvement in likely criminal acts.

Once again, Republicans showed themselves to be Donald Trump's co-conspirators rather than responsible stewards of American democracy.

How did the Democrats behave? They were genuinely interested in trying to help the American people and the world gain insight into President Trump's behavior and character by hearing the sworn testimony from a person who was one of his closest allies and confidants. The Democrats also asked specific questions about how Cohen aided and abetted Trump's morally compromised and perhaps illegal behavior.

As has been the norm for some time in America, but especially during the Obama and Trump presidencies, the Democrats were the adults in the room while the Republicans acted like tantrum-throwing babies in soiled diapers.

Nothing that happened during that hearing is likely to alter public opinion significantly. Both Donald Trump's supporters and his detractors will feel vindicated by Cohen's testimony and the surrounding theatrics.

Where does this leave the majority of the American people, most of whom do not follow politics closely? They are fatigued by the Trump-Russia scandal. New research from PRRI shows that the American people are highly polarized and extremely divided. Trump's support may be softening among some key voters, including the "white working class" in the Rust Belt states. There has also been a softening of support for Trump among some "Obama to Trump" voters (a small proportion of the electorate). But in total, Trump remains remarkably popular among Republican voters.

In the Western narrative tradition, stories usually follow a three-act structure, with a beginning, a middle and an end. They also follow a pattern: there is the introduction, rising action, a climax, a complication, falling action, and then a conclusion and resolution.

When special counsel Robert Mueller's report on the Trump-Russia scandal is finally made public, regardless of its findings -- and they will likely be very damning for Donald Trump, his inner circle, the Republican Party and the larger right-wing movement -- there will be no neat and tidy conclusion to this American drama-nightmare. That too will be another chapter in this interminable story. Trump's cultists will not abandon their Great Leader. Liberals, progressives and other principled people of conscience will be disgusted and sickened that Trump remains in power and could well be re-elected in 2020.

The average American will just be further exhausted by what they see as a broken government that does not protect and serve their well-being and best interests. Faith in the very idea of government will be further undermined.

The plutocrats and the kleptocrats, as always, will find a way to increase their wealth and in doing so expand their power and control over society. Authoritarianism is good for business. They are opportunists: A broken government is a carcass that they can devour with ease and at their leisure. This should be understood as the ultimate goal of "plutocratic populist" leaders such as Donald Trump.

That the American people and the country's elites are unwilling or incapable of uniting around a basic and obvious truth -- Donald Trump and his movement are illegitimate and represent a dire threat to American democracy and the safety and security of the American people -- reflects a profound and deep cultural problem. It cannot be fixed by impeachment or the 25th Amendment, or even by voting to elect a different president next year.

Trump is a symptom of a much larger disease. Trumpism and the proto-fascist upsurge he represents are an outgrowth of alienation, social atomization, racism, bigotry, anti-intellectualism, wealth and income inequality, loneliness and a breakdown in America's civil, cultural and political institutions.

As Chris Hedges writes in the conclusion to his new book "America: The Farewell Tour":

The U.S. government, subservient to corporate power, has become a burlesque. The last vestiges of the rule of law are evaporating. The kleptocrats openly pillage and loot. Programs instituted to protect the common good -- public education, welfare, and environment regulations -- are being dismantled. The bloated military, sucking the marrow out of the nation, is unassailable. Poverty is a nightmare for half the population. Poor people of color are gunned down with impunity in the streets. Our prison system, the world's largest, is filled with the destitute. There is no shortage of artists from Martin Buber and George Orwell to James Baldwin, who warned us that this dystopian era was fast approaching. But in our Disneyfied world of intoxicating and endless images, cult of the self and willful illiteracy, we did not think. We will pay for our negligence.

Public hearings such as this week's appearance by Michael Cohen are urgent and necessary. But such hearings will also be treated as a spectacle by a society that has "amused itself to death."

What comes next in this never-ending American political tragicomedy? And what is this epic story doing to the mental, physical and emotional health of the American people?