Trump loyalist spread birtherism, claimed Hezbollah sold drugs in U.S. But why was he a Democrat in 2008? 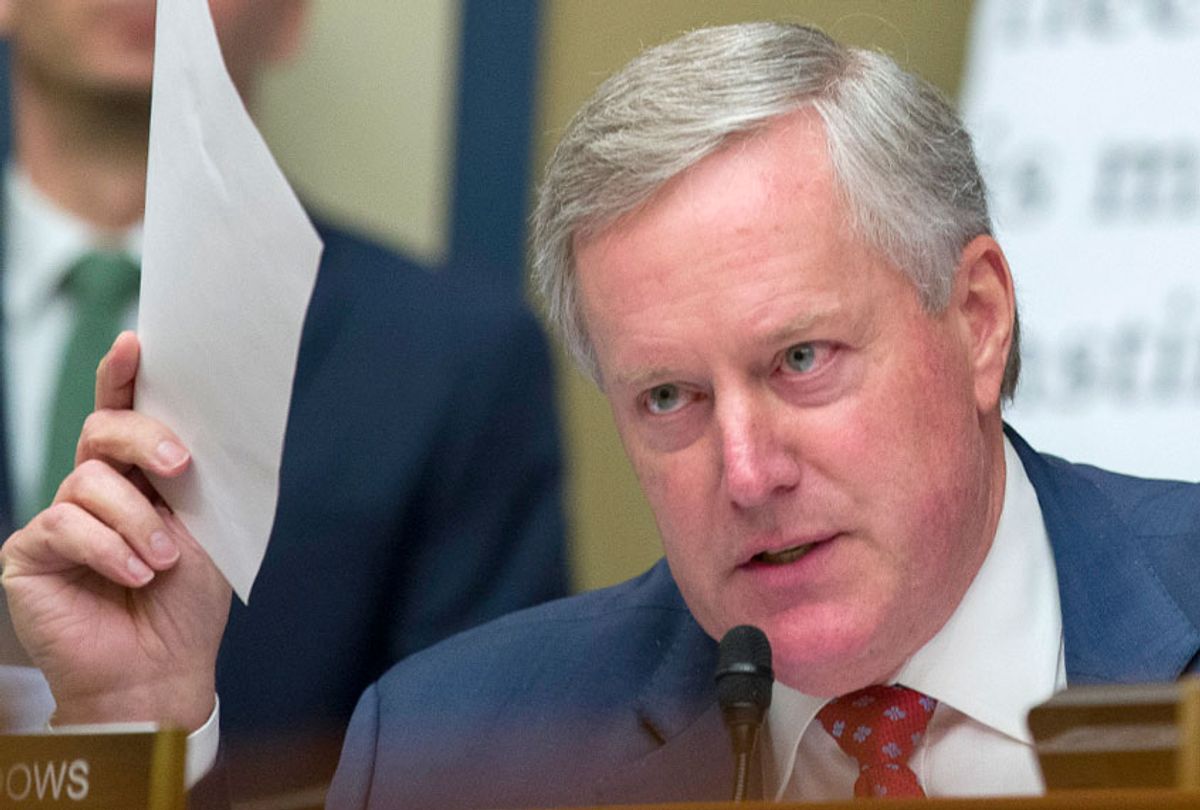 Rep. Mark Meadows, R-N.C., who defended President Trump vigorously during Michael Cohen's testimony before Congress on Wednesday, has an intriguing history. He has now come under intense scrutiny for promoting the fringe conspiracy theory that claimed Barack Obama was actually born in Kenya and was therefore ineligible to be president. Meadows' "birther" comments resurfaced after the lawmaker defended himself against allegations of racism on Wednesday.

Meadows' earlier remarks about Obama were shared on social media after his spat with Rep. Rashida Tlaib, D-Mich., during Cohen's appearance hearing before the House Oversight and Reform Committee. The clash began after Cohen described the commander-in-chief as a "racist" — a charge that Meadows tried to refute by inviting Lynne Patton, a black woman who has worked for the Trump family and now at the Department of Housing and Urban Development, to defend Trump against the accusation. Tlaib, one of two Muslim women elected to Congress in 2018, was troubled by this and used her time at the hearing to criticize Meadows.

"Just because someone has a person of color, a black person working for them does not mean that they aren't racist," Tlaib said during Wednesday's hearing. "And it is insensitive ... the fact that someone would actually use a prop, a black woman in this chamber, in this committee, is alone racist in itself."

Meadows erupted, appearing to be nearly in tears, as he spoke about having a niece and nephew of color as well as his close friendship with Rep. Elijah Cummings, D-Md., the committee's chair. Tlaib then clarified her remarks, saying she did not intend to characterize Meadows personally as a racist, only his actions before the committee.

During Wednesday's hearing, Patton stood silently behind Meadows while he argued, in effect, that her loyalty to Trump was evidence that the president not be a racist. Meadows asked for Patton's statement to be added to the Congressional Record, even though she never uttered a word. The HUD official then left the chamber but her brief appearance set off the heated exchange between Tlaib and Meadows. (In a statement Wednesday, Patton fired back at Tlaib and insisted she wasn't used a "prop.")

After Meadows' outburst at Tlaib, Steve Morris of the left-leaning media watchdog Media Matters shared a video to Twitter on Wednesday that showed Meadows in 2012, as a candidate for Congress, standing in front of a Tea Party Express bus and telling voters that "2012 is the time we are going to send Mr. Obama home to Kenya or wherever that is."

After that clip had gone viral, another video resurfaced that featured Meadows using the same words. During that same campaign, Meadows vowed that if elected he would launch an investigation into whether Obama was born in the United States. Speaking to Roll Call in 2012, Meadows clarified his remarks and said he believed Obama was an American citizen.

But according to previously unreported videos unearthed by Salon, it appears Meadows has a documented history of denigrating racial minorities and promoting conspiracy theories.

In his introductory campaign videos, Meadows outlined a platform that was unapologetically pro-life and opposed to same-sex marriage. He said he wanted to defend the U.S. Constitution from liberal judges, whom he claimed would allow Sharia law, the legal code of Islam, to govern America.

During his 2012 campaign, Meadows again expressed his fear of Sharia law and warned that it was taking over the British Parliament.

"In England, we have prime ministers that are actually now coming in where Sharia law is their guide and we're seeing a takeover of the British Parliament. ... Is it a major threat? Yes. Do we need to be vigilant? Without a doubt," Meadows said at the time. (There have been no Muslim prime ministers of Britain and no area of that nation is governed by Sharia law.)

In a 2015 interview with Rabbi Mark S. Golub of L'Chayim, Meadows, who at the time served on the House Foreign Affairs Committee and the Subcommittee on the Middle East and North Africa, expressed his belief that Hezbollah, the Iran-backed militant group based in Lebanon, had infiltrated North Carolina and could take over major cities across the country.

"When you look at terrorist organizations, primarily Hezbollah in that particular region (the Middle East), it's not just there. It's in Canada. It's in the United States. It's in my state," Meadows said.

Golub pressed, "What is? What is?"

Golub followed up, "Hezbollah drug trafficking is in North Carolina?"

"Ok you don't literally mean there are Hezbollah members. You believe that somehow there are tentacles of their --"

There appears to be no evidence that Hezbollah has engaged in criminal activity in North Carolina or any other U.S. state.

Meadows, who is now in his third term in Congress, is the leader of the arch-conservative House Freedom Caucus. He has been skeptical of climate change, suggested that same-sex marriage could lead to a constitutional crisis, and voted against the Violence Against Women Act in 2013 because it would extend protections to lesbians, gays, Native Americans and immigrants.

Another unexplained item on Meadows' résumé could also be embarrassing, considering his current status as a leading figure on the Republican far right. He and his wife both registered as Democrats in 2008 — the year of Obama's successful campaign for the presidency — and voted in the Democratic primary that spring, according to the North Carolina Board of Elections. Both before and after that year, Meadows and his wife were registered Republicans. Meadows' office did not respond to Salon's request for comment.