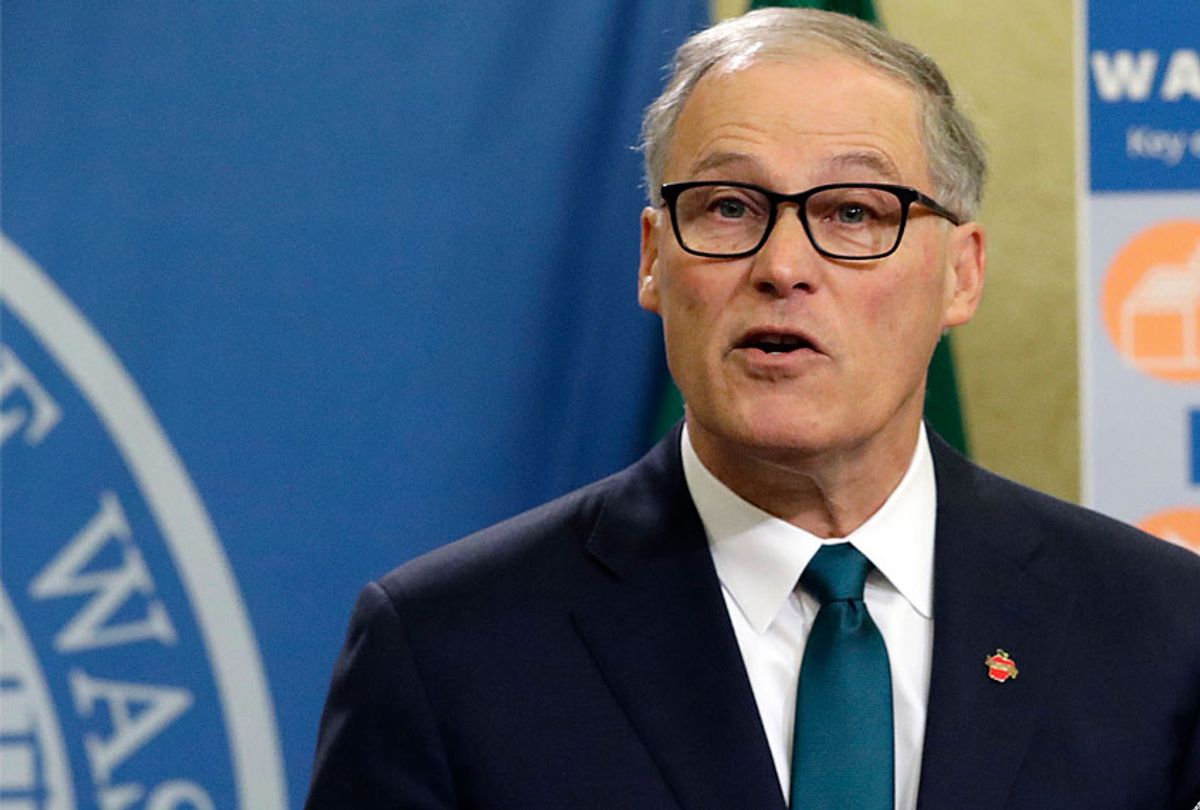 Washington Gov. Jay Inslee announced Friday that he will run for president in 2020, becoming the first governor to join a crowded field of Democrats vying to challenge President Donald Trump in the next election cycle.

In his announcement video, the 68-year-old governor made it clear that his campaign would focus on climate change, pledging to transition the nation to 100 percent renewable energy sources and create "millions of good paying jobs" in "every community across America."

"We're the first generation to feel the sting of climate change," Inslee said over footage of the burned-out rubble California's wildfires left behind last year. "And we're the last that can do something about it."

"I'm running for president, because I'm the only candidate who will make defeating climate change our nation's No. 1 priority," he says in the video.

Although Inslee is not the only 2020 hopeful attempting to win over voters by proposing clean energy legislation, his record of fighting for renewable energy and reducing greenhouse gases spans over a decade. In 2006, while representing Washington in Congress, he established a clean fuel standard in the state. The following year, he co-authored a book titled "Apollo's Fire: Igniting America's Clean-Energy Economy," in which he detailed a vision for combating climate change by investing in clean energy and a renewable energy workforce.

In 2014, Inslee signed a broad executive order to cap Washington's carbon pollution emissions while increasing its energy independence and economic competitiveness. Three years later, he founded the bipartisan U.S. Climate Alliance, an interstate governor coalition working to uphold the country's climate negotiations with other countries after Trump announced the United States will withdraw from the Paris climate agreement. (The formal withdrawal will not occur until two days after the 2020 election, likely forcing the issue onto the presidential debate table.)

Inslee has also fought against major fossil fuel infrastructure projects. In January 2018, he rejected a permit to build what would have been the nation's largest oil-by-rail terminal at the Port of Vancouver. In May, he blocked the construction of a $680 million coal-export terminal on the Columbia River.

Last month, before announcing his likely climate-centered presidential bid, Inslee pledged to reject donations from the fossil fuel industry. Despite the army of progressives vying for the Democratic presidential nomination, Sen. Elizabeth Warren of Massachusetts is the only other 2020 hopeful that has so far vowed to no longer accept campaign donations from fossil fuel companies.

Inslee is not alone in his fight against climate change. A super PAC supporting Inslee, Act Now on Climate, launched on Feb. 21 in anticipation of Inslee's entry into the 2020 race and is expected to back him. The group, helmed by former Democratic Governors Association political director Corey Platt, plans to move to pressure other candidates to focus on climate change if Inslee drops out of the race, Politico reported.

In recent weeks, the introduction of a "Green New Deal" in Congress — a 10-year plan designed to combat the threat of climate change and economic inequality by investing in renewable energy and green jobs — has refocused national attention on climate change. While Republicans have attacked the proposal, some dismissing the science of climate change, several Democratic presidential contenders haves signaled their support, including Sens. Elizabeth Warren of Massachusetts, Cory Booker of New Jersey, Kirsten Gillibrand of New York, Kamala Harris of California, Bernie Sanders of Vermont, Amy Klobuchar of Minnesota and South Bend Mayor Pete Buttigieg.

If Inslee qualifies for the first Democratic primary debates — which is likely, given the Democratic National Committee's relatively low threshold for appearing on stage — he will spotlight the issue.  However, climate will not be Inslee’s only issue. Last week, the governor told HuffPost that the Senate filibuster, which requires 60 votes to pass most bills instead of a simple majority (51 votes), should be eliminated. The filibuster is seen by many Democrats as a likely impediment to enacting Green New Deal legislation.

While it remains to be seen if Inslee will stand out to the nation's voters, recent polls reveal that Americans have never been more worried about climate change and its influence on their lives.