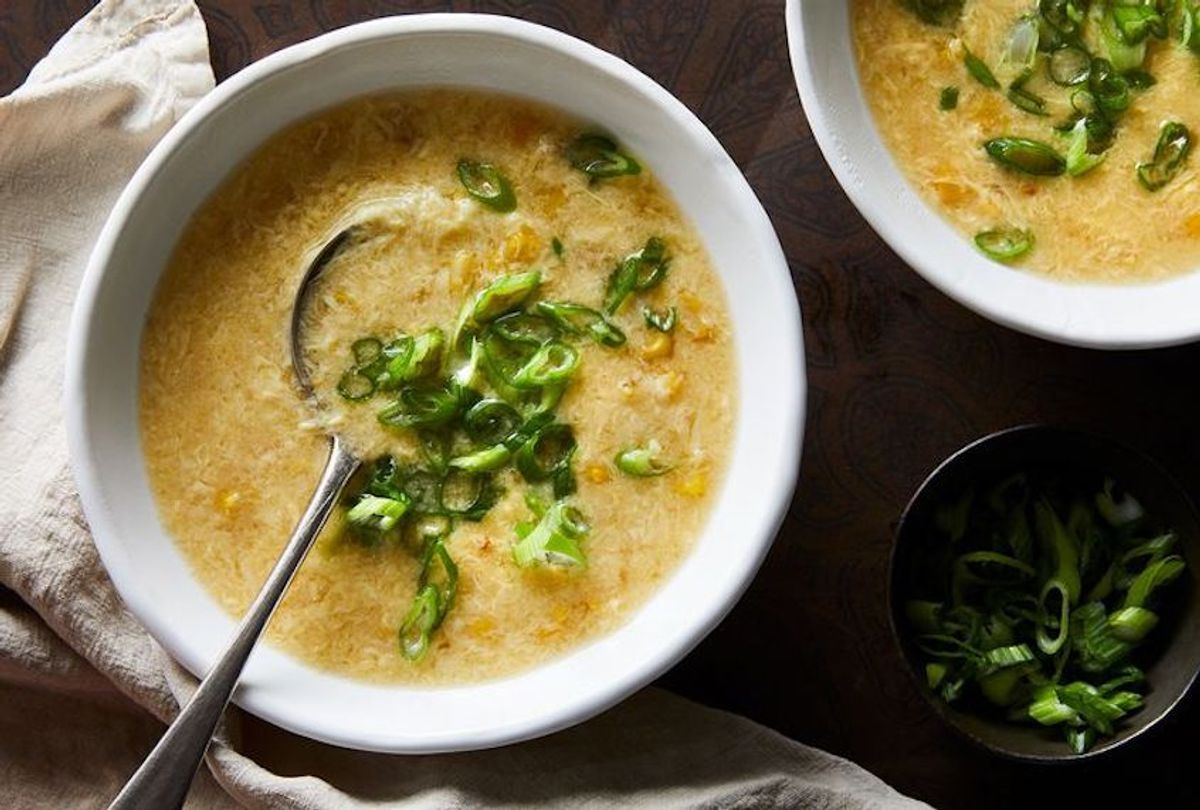 I love to cook with my friends. Actually, correction: I love to cook for my friends. When I invite people over for dinner, I rarely ask for help, be it for the prep work or cleanup. A small part of this has to do with the fact that my kitchen is small even by New York City standards (leaving little room for extra hands), though the honest reason is that I like to be in charge down to the very last detail (what can I say? I'm a Capricorn).

But just as the temperatures were starting to take a dip a few months ago, my good friend Yih-Jen, who is always game to test whatever I'm cooking up, told me about his grandma's egg drop soup. (You might remember Yih-Jen as an innocent bystander to my Chrissy Teigen breakfast casserole fiasco, a brunch gone awry — for which he has since forgiven me.)

This egg drop soup recipe intrigued me right from the get-go: just five ingredients and 10 minutes for a silky yet hearty soup that he said tastes like it's been simmering all day. I knew that I had to try it for myself, so when Yih-Jen offered to make it for me one December weekend, I surrendered my kitchen immediately. (Spoiler alert: This would prove to be a very good decision.)

As he laid out the ingredients on my narrow kitchen countertop, he explained to me how his grandmother came up with this recipe after she came to America from China in the 1990s. She wanted to recreate the Chinese flavors she grew up with using Western ingredients, like Campbell's Cream of Chicken Soup and canned corn. Since then, the recipe has been passed down to his mother and now to him; he makes it whenever he's feeling under the weather or in the mood for something quick and comforting.

Speaking of quick, the soup came together before I barely even had time to notice him opening the cans and pouring everything in the pot. Within minutes, the cream of chicken soup, chicken broth, and corn (along with its juice) were bubbling away on the stovetop as Yih-Jen chopped scallions for the bright, crunchy garnish.

I did make sure to pay attention to the most important step, though: the eggs. In a bowl, he whisked together four large eggs and added a few splashes of ice-cold water, which he said helps give the eggs their signature texture in the soup. After bringing the pot to a low simmer, he poured in the egg mixture with one hand while continuously stirring the soup with the other. In just a few seconds, ribbons of egg began to flower, and after a minute or two more of stirring, the soup was ready to be sprinkled with scallions.

The first bite was rich and perfectly salty; in the next bite, the egg's silky texture and the scallion's mild-sweet onion flavor came through. It was addictive, especially with a bit of chili pepper and sesame oil mixed in. Before I knew it, I had practically drunk the first bowl dry and was already ladling myself seconds. This would be a soup I could make again and again and again — and since that wintry day when Yih-Jen introduced the golden elixir to me, I have: when I'm feeling lazy or tired; when I have a hankering for something savory and slurp-able; when I feel a cold coming on; and especially when there's a Polar Vortex moving through the country, and it's far too cold to dare go outside.

Yih-Jen was totally unsurprised that I was such a fan. How could I not fall in love with a hot and flavorful bowl of soup that comes together in just a few minutes and even fewer ingredients (all of which I keep stocked in my pantry anyway)? If this is what it means to let someone take over my kitchen, I'm all for it.