The Green New Deal: Just focus on what we do, not how we pay for it

It’s what we do with the funds that matters. 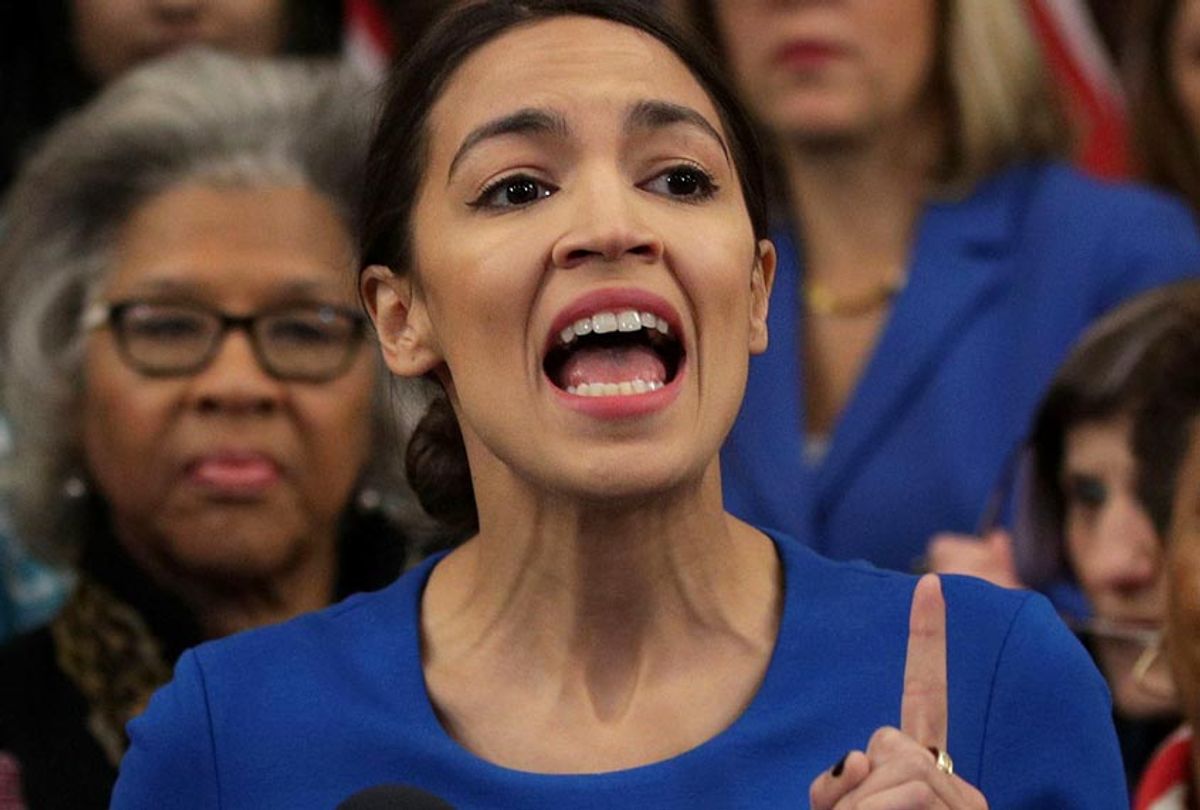 Rather admirably, the resolution sponsored by Sen. Ed Markey (D-MA) and Rep. Alexandria Ocasio-Cortez (D-NY) marks a significant break from the usual “small ball” incrementalist approach to politics adopted in D.C., reflecting the increasingly prevailing view that the next decade or two is make-or-break for planet Earth.

The sheer scale of the ambitious proposal—net-zero greenhouse gas emissions, clean air and water, married to traditional bread-and-butter progressive issues, such as a job guarantee and universal health care—have led to two predictable lines of attack: The first is that the program represents full-on socialism: a grab bag of the left’s favorite policies, “with everything from universal health care to a job guarantee draped under the mantle of environmentalism,” as a recent New York Times opinion piece explains. The second issue is how we are going to pay for it, given that the proposed Green New Deal resolution envisages costs that will run into the trillions to undertake this whole restructuring of the U.S. economy.

Shorn of ideological rhetoric, the answer to the second question is actually quite simple. We “pay” for these specific proposals much as we do with any government initiative: Congress appropriates the funds, and the government literally spends the money into existence. The key point here is that when a government issues a currency that is not backed by any metal or pegged to another currency (i.e., the currency is created via government order, or “fiat,” hence the term, “fiat currency”), then there is no reason why it should be constrained in its ability to finance its spending by issuing currency in the way it was, say, under a gold standard (in which the supply of gold held by each nation literally controlled its capacity to spend). By extension, taxes don’t actually “fund” the government, so much as they constrain overall expenditures in the economy. In essence, government spending adds new money to the economy, whereas the imposition of taxes takes some of that money out again. The constant addition and subtraction of these spending and taxing activities is how “fiscal policy” actually works (and the sequencing is actually the opposite of what is traditionally taught in most economics textbooks). Likewise, as the monopoly issuer of the currency, the U.S. government (via the Federal Reserve) establishes the rates at which we borrow (not “the market”). It therefore follows that a sovereign currency-issuing government, unlike a private company, does not have market-based costs of capital that set the opportunity cost of their activities. This is important to remember when you hear politicians outlining how certain policy goals are somehow “constrained” by borrowing costs (or a particular discount rate).

This is also why private sector concepts such as “internal rates of return” (IRR) or “return on equity” (ROE) are only relevant in macroeconomic policy terms, to the extent that the appropriated capital is used as productively as possible to mitigate possible inflationary pressures, as opposed to whether this spending ultimately generates a profit or loss for the government. To put it another way, even if the government’s “balance sheet” is adversely affected by poorly conceived and executed policy choices, these mistakes have no bearing on whether the United States, as the currency issuer, has the “fiscal capacity” to meet any future crisis (in contrast to a private firm, which can’t afford to misuse its finite capital resources, lest cumulative losses drive it out of business). As such, costs and benefits must be measured largely in social terms, rather than financial terms, even as we acknowledge that the damage to GDP from the negative effects of climate change can be substantial.

Note that although there is no financial constraint on the ability of a sovereign nation to deficit spend, this does not mean that there are no real resource constraints on government spending; this is the real concern that should guide policy, not financial constraints. If government spending pushes the economy beyond full capacity, inflation will result. A government can create all of the currency it likes, but there are finite supplies of natural resources, labor, and other productive assets that form the backbone of an economy. Put another way, money is not scarce, but real resources can be. So if government spending does not add to the economy’s productive capacity, then excessive expenditures will almost certainly become inflationary, and that does represent a legitimate constraint. That is why the main focus of the Green New Deal should be on how the money is spent, rather than how the program is to be funded.

So in assessing how appropriated funds under a Green New Deal are spent, the decarbonization of the U.S. economy must be constructed with a view toward other broad social goals, which is why the Markey/Ocasio-Cortez resolution incorporates so many additional features that at first glance do not deal solely with environmental issues (a complaint recently made by Speaker Nancy Pelosi). A job guarantee, for example, must be a germane consideration in contemplating a substantial reduction and ultimately a full-on elimination of the fossil fuels industry. This not only means the hundreds of thousands of workers actually involved in the extraction, production, and distribution of oil, gas, coal, etc., but also the administrative and support jobs connected to these industries, and the communities adversely impacted by the resultant job losses.

To give some idea of the scale of potential jobs at risk here, a recent U.S. Energy and Employment report from 2017 estimates that there are “about 2.3 million jobs in Transmission, Distribution, and Storage, with approximately 982,000 working in retail trade (gasoline stations and fuel dealers) and another 830,000 working across utilities and construction.” It is virtually impossible to contemplate the implementation of a Green New Deal if it is not accompanied holistically by policies that address the potential job disruption. We don’t want to have this debate framed yet again within the sterile paradigm of “jobs vs. environment,” which is a political non-starter.

The Canadian Labor Congress, among others, has enumerated a number of possible jobs to which the displaced workers could transition. These jobs would include “the retrofitting of buildings for energy conservation, the retraining of workers to become energy auditors, developing renewable energy sources, promoting sustainable transport systems, supporting community-based sustainable industries, community revitalization projects, moving towards a complete waste recycling program, and creating a publicly owned infrastructure that will manage in the public good.”

There’s no question that a properly revived manufacturing sector would also lead to a revived working and middle class, because as the economist Seymour Melman explained, high-skill manufacturing leads to a process of economic growth that gives workers more power, economically and within the firm—even with mechanization and automation. To be sure, historically, manufacturing has often been associated with “dirty” industries. According to Jon Rynn, a fellow at the CUNY Institute of Urban Systems, emissions from manufacturing account for about 28 percent of greenhouse gas emissions. Once the electrical system is renewable, however, a substantial amount of these emissions is eliminated, because almost all industrial machinery uses electricity. So if the electricity is clean, manufacturing can expand without worsening the climate problem. Needless to say, this will require significant investments in energy efficiency alongside rapid decarbonization of power sources for as much of the economy as possible.

The broader question of inequality must also be tackled. We live in a world where things are interdependent. Hence, the whole concept of a just transition to an environmentally sustainable economy can only be adequately addressed when it is wrapped in a broader set of policies designed to help most Americans, which raises distributional questions that are part of the broader problem of today’s highly unequal economy. As the economists Emmanuel Saez and Gabriel Zucman have documented, tax data in the United States illustrates that top 0.1 percent now hold 22 percent of the total wealth in the United States—the same amount as the bottom 90 percent. This takes us back to levels of economic distribution that existed more than 100 years ago, when we barely had cars, unions were virtually non-existent, and social welfare provision was minuscule. Simply believing that creating a whole bunch of “clean tech” jobs in and of itself will resolve this problem is disingenuous, which is why the Markey/Ocasio-Cortez resolution specifically addresses the broader issue of economic inequality.

Failure to address the inequality question exacerbates the inflationary problem, because when increasing amounts of GDP are directed toward those with the highest savings propensities (i.e., the 1 percent), it means that the economy doesn’t grow as efficiently. This matters when we are addressing a genuine national emergency, such as climate change (as opposed to the faux “national emergency” related to Trump’s southern border wall).

The scale of the spending shouldn’t scare people. At $2 trillion a year, that’s around 10 percent of a $20 trillion economy. Put another way, the American government has spent greater sums in its Afghanistan and Iraq wars with no lasting productive benefit accruing to the U.S. economy (to say nothing of the social costs and global environmental degradation). By way of comparison, as Jon Rynn writes, “the Federal government paid for most of the machinery used to create the military equipment during World War II, and the corporations bought the factories for pennies on the dollar after the war ended.” To put it another way, the federal government did not “record a profit” on the sale of these assets, but the “return” came in the form of much of the industrial machinery that was the basis for the shared prosperity of the post-WWII boom, a period of unparalleled “shared prosperity” (emphasis added) for the United States.

We have to make choices, but the idea that we can’t make the right choices based on funding concerns is ridiculous. However, the policy goal embodied in the Green New Deal must be part of a broader policy framework, much as Franklin Delano Roosevelt ultimately conceived of his Economic Bill of Rights (which featured a government-funded health care provision) as an extension of the original New Deal. After all, the Green New Deal is as much about enhancing “human capital”—that is, increasing the wealth-generating capability of people—as it is about “physical capital,” the machinery and systems that are physical in nature. Speaking about one without the other is as misconceived as speaking about a tree outside the context of the forest in which it grows. Remember that, the next time someone dismisses the Green New Deal as a grab bag of policies designed to ensure a communist-style capture of the commanding heights of the economy.