The Fox star made a rep as the consummate '90s heartthrob. Through "Riverdale," he also grew up with his fans 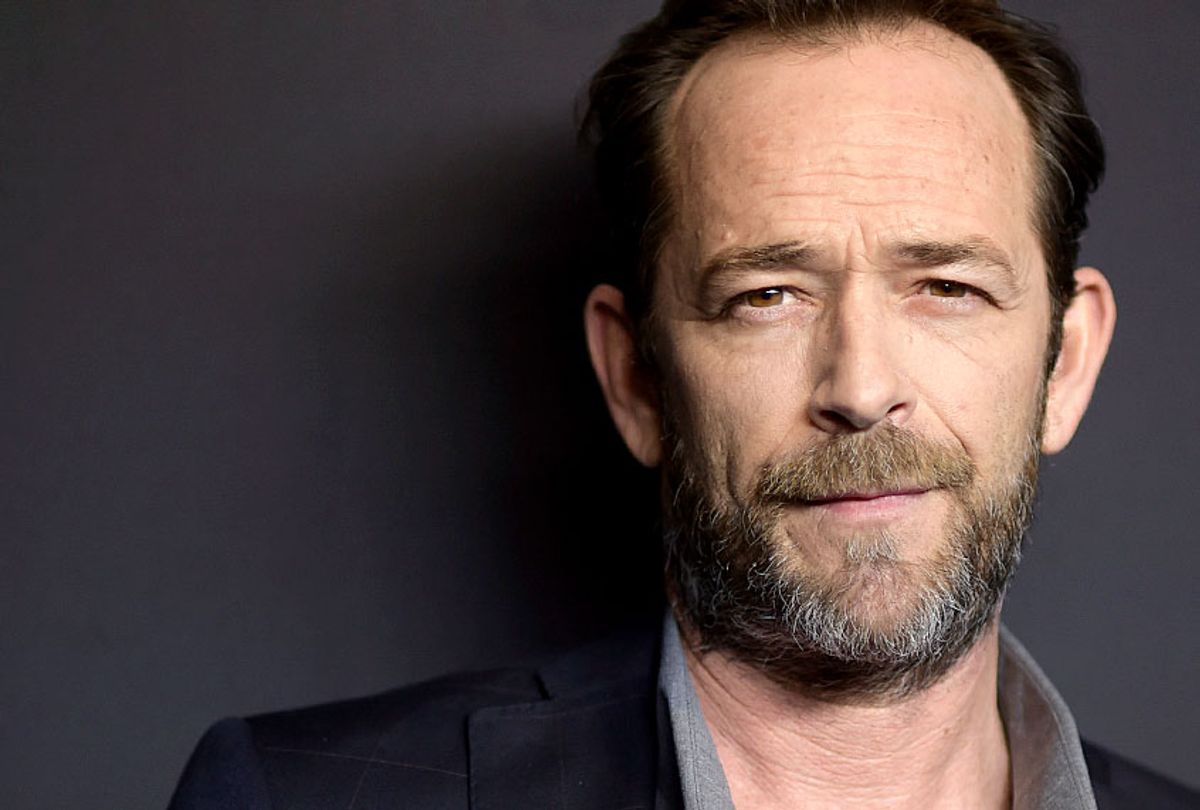 Twenty-seven and a half years ago, when Luke Perry was about embark on playing Dylan McKay in the second season of Fox’s “Beverly Hills, 90210," the promise of glimpsing him at an official mall appearance was enough to guarantee absolute chaos.

In August 1991 at the Fashion Mall in Plantation, FL, an estimated 10,000 screaming fans bum rushed the stage when he came out, resulting in 21 people being injured, “ranging in age from 8 to 39,” according People, with the reporter adding, as to emphasize the what-is-the-world-coming-to bizarreness of it all, “ yes 39.”

Three months before that in Bellevue, WA, Perry had to hide in a laundry hamper in Bellevue Square Mall after 4,000 rabid fans descended upon him.

This is what happens when a decade spent obsessing over the signifiers of a different decade lacks an icon on par with James Dean. Television creates one — or more accurately, “90210” creator Darren Star, by way of primetime soap opera producer Aaron Spelling, does that — and the teenage girls come running.

Perry was 24 in 1990 when “90210” made him the No. 1 dreamboat of millions of American teenagers, not to mention the 39-year-olds he could have legally dated at the time.

That strain of affection runs fathoms deep, particularly these days when the very same age  demographic can be counted upon to, say, sell out a cruise dedicated to the New Kids on the Block.

Or, more pertinently, they’ll show up to watch “Riverdale” not for Archie Andrews but to watch the man who once co-starred in their REM cycle reveries play Fred Andrews, Archie’s morally-upright dad. Though it must be said that “Riverdale” is written as much with an adult audience in mind as a teen one, the girls who used to drool over Dylan McKay are parents themselves these days. Perry’s participation gave them a reason to tune in. (Production on The CW series has since been halted.)

Understandably, people who might not otherwise be affected by the passing of a celebrity may be hit a little harder than expected by Monday’s news that the 52-year-old Perry died after suffering a massive stroke, according to his representative Arnold Robinson. He was hospitalized last week after paramedics responded to a 911 call on Wednesday about a possible stroke at his Sherman Oaks home.

"He was surrounded by his children Jack and Sophie, (fiancée) Wendy Madison Bauer, ex-wife Minnie Sharp, mother Ann Bennett, step-father Steve Bennett, brother Tom Perry, sister Amy Coder, and other close family and friends," Robinson said in a statement quoted in USA Today. "The family appreciates the outpouring of support and prayers that have been extended to Luke from around the world, and respectfully request privacy in this time of great mourning.  No further details will be released at this time."

For a generation of tween and teen girls raised on whitewashed 1950s nostalgia, ‘80s style, Perry’s Dylan McKay represented the right kind of bad boy, a guy they could picture spending afternoons with at a far less crowded version of the mall, blowing their allowances on matinees and overpriced burgers and milkshakes at Johnny Rockets.

Underneath the brooding expression Dylan McKay was a loner who was damaged but not broken, a kind boy who struggled with substance addiction and just happened to be saddled with a terrible father — the sort of boy nice girls could fantasize about fixing and sharing dates at the Peach Pit, the show’s fictional version of the ‘50s-style diner popularized in the Reagan Era.

Dylan became close friends with Brenda and Brandon Walsh (played by Shannen Doherty and Jason Priestley) wholesome Minnesota teens who move to one of the world’s wealthiest zip codes when their dad gets a promotion.

Soon enough, much of the show’s drama revolved around Brenda and Dylan’s whirlwind romance, culminating (much to the shock of parents at the time) in Brenda going all the way with Dylan in a luxurious hotel room on the occasion of the Spring Dance. Brenda and Dylan viewed this as a positive experience — a significant development at a time when fear of HIV and AIDS and unwanted pregnancy informed many TV depictions of teen sex.

Of course, the writers would break them up soon afterward, mostly for reasons of maintaining the tension between Brenda and her best BFF Kelly, who also wanted Dylan (and eventually got him).

But from all indicators, Perry’s “Beverly Hills, 90210” character and the actor were very different people. Contrary to the public persona cultivated another star Fox launched in the 1980s, Johnny Depp, Perry did not appear to be interested in living up to the “bad boy with a heart of gold” image written for him.

Rather, his sudden, outsized fame following a stint paying his dues in the usual ways, include roles on the daytime soap operas “Loving” and “Another World,” appeared to take him by surprise.

“'I’m not James Dean. And no one else is either,'' Perry said in an August 29, 1991, Knight-Ridder Tribune News story that ran prior to the second season premiere of “Beverly Hills, 90210.” ''There's always someone being called the next James Dean. But there was only one. And he’s dead.''

On the heels of his time with “Beverly Hills, 90210” Perry made an effort to break away from Dylan McKay by taking on film and television roles that starkly contrasted that identity. Notably, his turn as crooked prison reverend Jeremiah Cloutier on HBO’s “Oz,” among other things, showed him dashing naked through a prison and netted him one of the series’ most memorable deaths: Jeremiah was bricked up inside of a wall while still alive, but miraculously survived by way of living through a terrible explosion and fire . . . only to be buried again.

He’d also produce a post-apocalyptic series for Showtime called “Jeremiah” in 2002, which ran for two seasons, co-star in the short-lived NBC series "Windfall," and enjoy a role in David Milch’s short-lived “John from Cincinnati.” Through it all he’d always be associated with Dylan McKay, a fact he never minded.

“I’m no fool; I know what Dylan McKay did for me,” Perry told TV Insider’s Damian Holbrook in 2017. “And I enjoyed the s--t out of playing him.”

Stanning for teen idols past is something of an anti-aging device these days. It’s also a means of maintaining an in-person connection to the kind of fandom which these days is largely controlled by the convention market and split into micro-sectors by the sheer number of channels and platforms.

Simply put, you don’t hear many stories about American teenagers stampeding their peers for a chance at getting a peek at their stars they're crushing on these days. Fame is a plentiful concept, and celebrities are readily accessible by social media.

Perry straddled the mania for the past and the gentle nostalgia for pop culture’s symbols of youth with dignity through his career, another increasingly rare quality for stars whose most indelible roles are decades in their rearview mirrors. He refused to appear in The CW's “90210” spinoff. He was content to pop up for random cameos on shows like “The Simpsons” and “Community” as opposed to, say, lending his credit to purposefully terrible B-movie franchises (although surely Ian Ziering has no regrets over his “Sharknado” fame).

Last week Fox announced a six-episode series, also titled “90210,” set to air this summer. In this tongue-in-cheek event show original cast members Priestley, Jennie Garth, Ziering, Gabrielle Carteris, Brian Austin Green and Tori Spelling have signed on to play “heightened” versions of themselves, attempting to get a reboot up and running.

Such a show was bound to attract an audience regardless of how much Perry would have been able to participate, left up in the air given his commitment to “Riverdale.” Now I’d wager people who loved the original "Beverly Hills, 90210" and Dylan McKay will watch with an eye on the man we’re missing, perhaps feeling more acutely how distant our real and imagined collective adolescence happens to be.