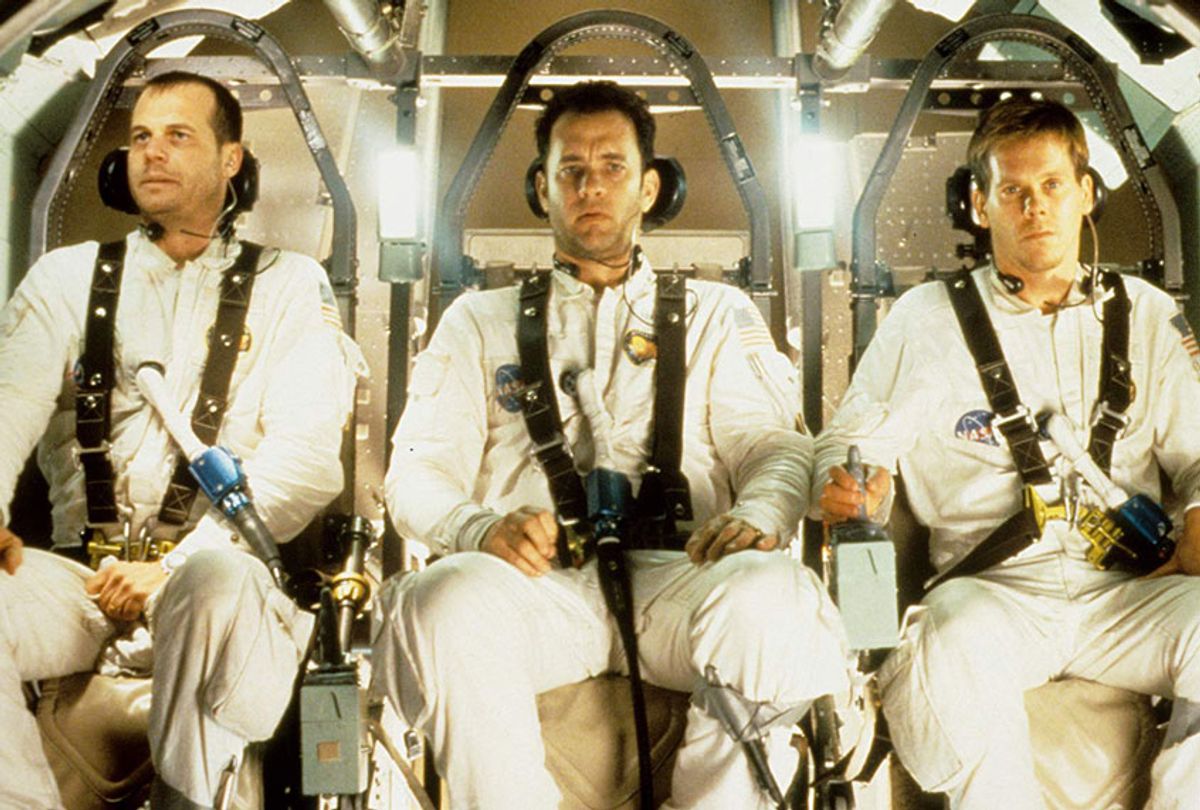 March can be a long month, and that’s especially true for cinephiles. Wedged between the Oscars and the start of the summer movie season (which now begins sometime in April), the tail-end of winter can feel like the deepest of doldrums on the annual movie calendar. Fortunately, Netflix is doing what it can to sustain its subscribers from now until spring.

This month’s new additions to the company’s streaming library offer a little something for everyone, from the soaring acrobatics of “Crouching Tiger, Hidden Dragon,” to the chilled mysteries of Debra Granik’s “Winter’s Bone,” and the heartbreaking drama of Asghar Farhadi’s “A Separation.” March’s Netflix Originals include Chiwetel Ejiofor’s directorial debut, Lukas Dhont’s controversial “Girl,” and the star-studded beefcake spectacle of “Triple Frontier.”  “Music and Lyrics” and “Nick and Norah’s Infinite Playlist” join the internet’s deepest stable of 21st century rom-coms, while Stanley Kubrick’s “A Clockwork Orange” is added to the internet’s most pathetic roster of pre-’90s cinema. “The Lives of Others” and “The Hurt Locker” might help with your post-Oscar hangovers, while Stephen Chow’s “Kung Fu Hustle” is coming to remind you that the movie world is richer and more wonderful than awards season might suggest.

Here are the seven best movies new to Netflix in March 2019.

Chiwetel Ejiofor’s solid and engaging directorial debut tells the incredible true story of 13-year-old William Kamkwamba (Maxwell Simba), the self-educated son of two poor farmers who taught himself how to build a windmill in order to save his desperate Malawian village from an onslaught of disasters. Without the shading and self-doubt that Ben Nabors’ 2013 documentary “William and the Windmill” found in the real Kamkwamba, Ejiofor struggles to make his protagonist feel like more than a symbol — it can be difficult to dramatize the development of an exceptional young mind, especially when a filmmaker has too much integrity to go full “Good Will Hunting” — but the kid at the center of this drama is far from the only compelling thing about it.

Trywell Kamkwamba, William’s father, is one of the most nuanced characters that Ejiofor has ever played. An uneducated Malawian farmer who strives to provide schooling for his children, Trywell is too dignified to sell the family’s ancestral land to the tobacco business, and too savvy to think he can redeem his future by surrendering his past. He’s an honest man in a village that’s being choked to death by corruption, and — as a national food crisis takes hold — Trywell grows too desperate to see that his young son might be the only one who can save the farm and ensure its harvest. Caught in a vulnerable position between tradition and aspiration, he’s the heart and soul of this inspirational saga, and Ejiofor’s conflicted performance is powerful enough to energize the rest of his uplifting film.

In some respects, “Nick and Norah’s Infinite Playlist” hasn’t aged particularly well. A teen rom-com that’s set during (and thoroughly defined by) a New York indie rock scene that lasted for the length of an Interpol song, Peter Sollett’s follow-up to “Raising Victor Vargas” was never going to age particularly well. On the other hand, good movies have a way of surviving their own obsolescence, of proving themselves to be more of a time capsule than a relic, and this charming downtown adventure is growing up along those lines.

A far cry from the MP3-era “Thin Man” reboot its title might suggest, the film stars Michael Cera as a Michael Cera type, and Kat Dennings as the sullen Manhattanite he meets at Arlene’s Grocery, the two of them crushing hard on each other across a wild night that takes them to every Brooklyn Vegan-approved venue in the city. It’s a starry-eyed blast, full of raw emotion and topped off by an all-time Ari Graynor, great in the role of Norah’s very drunk friend, Caroline. She’s a key reason why “Nick and Norah’s Infinite Playlist” will likely be playing on cable (and maybe even streaming on Netflix) long after the last Bishop Allen fan has forgotten that band ever existed — it’ll never grow old, because it so vividly captures what it feels like to be young.

Before “First Man,” before “Gravity,” and — as confusing as it might sound — before “Apollo 11,” there was “Apollo 13,” the movie that launched Hollywood into the space age. No, Ron Howard’s Best Picture-nominated blockbuster was not the first major film to take place in the cosmos (everyone from George Méliès to George Lucas had already gone to the stars and back), but “Apollo 13” achieved a verisimilitude that had never been seen before, using unsimulated weightlessness and cutting-edge special effects to make viewers feel as though Tom Hanks, Kevin Bacon, and Bill Paxton were actually drifting from the Earth to the Moon. Like “Titanic,” “Jurassic Park,” and the rest of the 90s’ most durable cinematic spectacles, “Apollo 13” hasn’t aged a day. In some ways, this story of American disaster and resilience might be even more resonant than the recent big-screen forays into space. It takes a lot courage to shoot for the stars, but it might take even more to survive what happens when you fall short.

Last year was hardly the first time that “Leave no Trace” writer-director Debra Granik was overlooked for her work on a major new film. Despite “Winter’s Bone” earning four nods at the 2011 Academy Awards — including one for Best Actress contender Jennifer Lawrence, whom this film launched into the stratosphere — Granik didn’t make the cut for Best Director, a trophy that ultimately went to Tom Hooper for “The King’s Speech.” Yikes.

But the lack of little gold men speaks to a film that was always going to be a little too feral and unvarnished for tuxedos and champagne and the other trappings of mainstream success. The story of a 17-year-old girl in the mountains of Missouri whose coming of age takes a violent turn when her meth dealer father goes missing, the film offers a mercilessly honest portrait of a family splintered by economic hardship, and of a young woman who’s forced to dig up her roots in order to keep her siblings whole. Revisiting “Winter’s Bone” in the wake of Lawrence’s supernova stardom — or even watching it for the first time, knowing that it was even capable of minting a generational movie star — it can be surprising to see how rough and realistic this frigid Ozark mystery really is. It hasn’t lost a (tear)drop of its power.

If you haven’t seen Asghar Farhadi’s unforgettable drama, now is the perfect time to catch up; later this year, when critics assemble their lists of the decade’s best films, “A Separation” is going to be on virtually every one of them. Winner of the Golden Bear, the Golden Globe, and the Academy Award for Best Foreign Language film, this even-handed stunner leverages a custody battle into an unsparingly human exploration of the ties that bind families together in Iranian society.

The story couldn’t be simpler: A woman named Simin (Leila Hatami) wants to leave the country with her husband, Nader (Peyman Moaadi) and their young daughter, Termeh (Sarina Farhadi), as she doesn’t want to raise a girl in a society that would limit her freedoms. Nader, who’s responsible for the care of his senile father, has other priorities. And so Simin decides to file for divorce. Needless to say, the courts don’t see the merits of her case, and a loving couple with differing needs begins to splinter into one of the most fractious and morally fraught breakups the cinema has ever seen. Honest, unsparing, psychologically complex in the way that movies seldom are, “A Separation” proved that Farhadi is one of the world’s greatest screenwriters, and launched the “About Elly” auteur into the upper echelon of contemporary filmmakers.

When the IndieWire staff ranked the films of Stanley Kubrick, “A Clockwork Orange” came in fifth, putting it above the likes of “Eyes Wide Shut,” “The Killing,” and “Paths of Glory.” If that isn’t enough to convince you of its greatness, allow Toolkit Editor Chris O’Falt to explain why this deranged masterpiece amounts to more than the sum of its most iconic sequences:

The social satire of “A Clockwork Orange” has become an accepted part of popular culture, which somewhat masks its status as one of Kubrick’s most heady and most risk-taking works. Adapted from Anthony Burgess’ 1962 book, it tells the story of Alex (Malcolm McDowell, in one of those roles that sticks to an actor for decades) and his crew of “droogs,” a group of violent juvenile delinquents in a future dystopia. In a film that explores the potential dangers of how behavioral psychology could be used by a totalitarian government, Kubrick was uncharacteristically open in announcing the film’s themes he was exploring. He wrote: “It is a story of the dubious redemption of a teenage delinquent by condition-reflex therapy. It is, at the same time, a running lecture on free-will.”

The film’s subversive brilliance is how Kubrick uses cinema to not only make Alex and his “droogs” palatable, but also uncomfortably entertaining. Kubrick constantly, but expertly, teeters on the line of identification and satire of his nihilistic characters who beat, rape, and steal. In a unique combination of music and costuming — because what thug doesn’t wear white leotards, a black derby, and love to kick back to some Beethoven — Kubrick created a cartoonish version of cool, and confronted the audience with its moral attitudes about the constraints of society, government, and the concept of free will.

Almost 20 years since “Crouching Tiger, Hidden Dragon” reignited the traditional Chinese genre of wuxia and invited the entire world to feast on its wonders, Ang Lee’s soaring, swooning masterpiece is every bit as glorious as it was on the day it came out. Chow Yun-fat, Michelle Yeoh, Zhang Ziyi, and Chang Chen all give career-best performances in this woozy (and still heartbreaking) epic about star-crossed lovers who trip over their own destinies, but the real star remains martial arts guru Yuen Woo-ping, whose balletic fight choreography is some of the best ever committed to screen. From the stunning rooftop showdown that kicks off the first action sequence, to the iconic treetop duel some two hours later, the combat here is almost supernaturally fluid. And that’s because the film’s violence is never for its own sake. On the contrary, every punch, kick, and swing of a sword is an urgent act of self-expression, as these unforgettable characters lash out at a world they long to transcend.

The climactic showdown between legendary warrior Shu Lien and the upstart Jen marks a pivotal shift in the movie, as it’s the first (and only) time that any of the main characters aren’t just sparring with each other. The tenuous maternal bond between these two Wudan masters — a hardened warrior and her gifted but impetuous disciple — is finally strained to the breaking point in the worst possible setting: A remote training facility that’s stocked with a full armory of very sharp weapons. The acrobatic melee that ensues is the closest thing we’ll ever get to a Shaw brothers remake of “Lady Bird,” as two aggravated women try to reconcile their vast individual strength into some kind of sustainable harmony…even if it kills them both in the process. No fight to the death has ever been so full of life.