Do Democrats need to play it safe to win in 2020? History says otherwise

Some donors and insiders believe Democrats must run a moderate white man to beat Trump. Here's why they're wrong 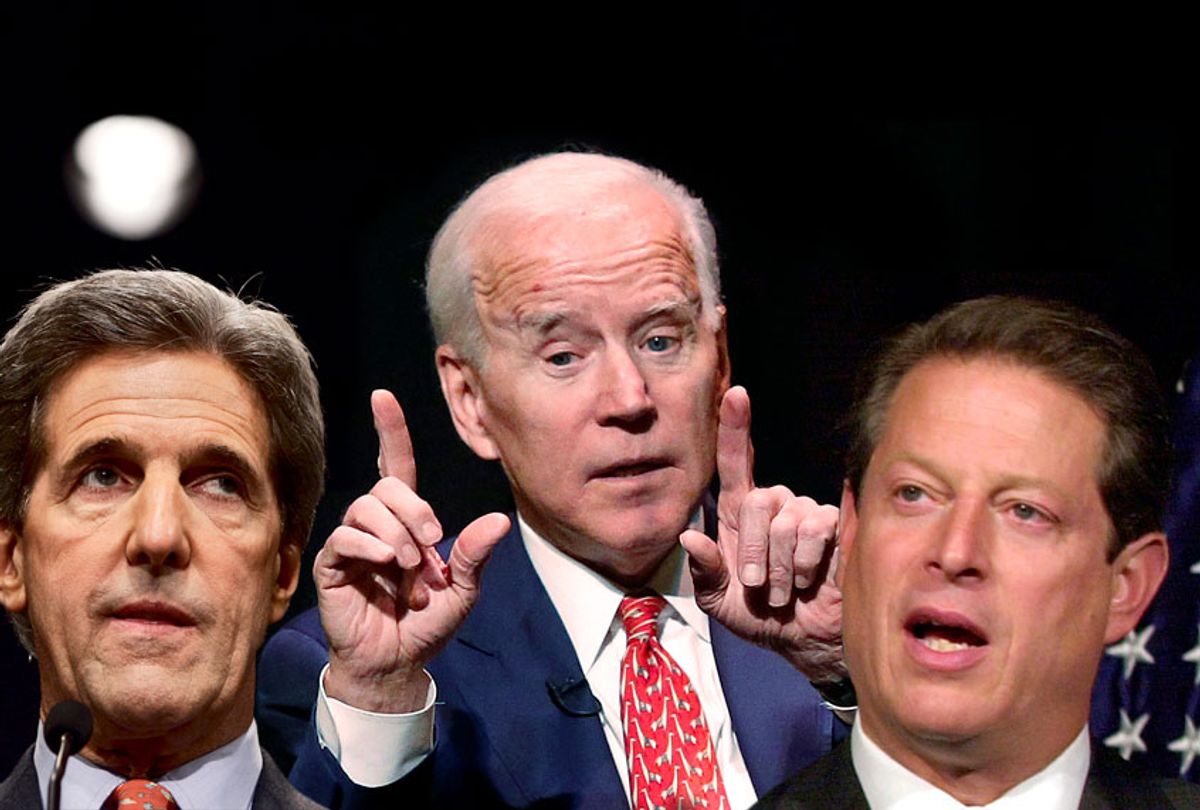 Make no mistake: Donald Trump could win again in 2020. Despite the bottomless corruption, the ever-more-overt support for white nationalism, the authoritarian overreach, the babies in cages, and his tendency to replace speeches with rambling and incoherent monologues, the basic system failures that led to Trump defeating Hillary Clinton in 2016 are still in place.

White, rural areas where voters are suspectible to Trump's proto-fascist rhetoric are still overrepresented in the Electoral College. Voter suppression is still robust. The mainstream news media still fails to convey the full scope of the Trumpian horror. The Fox News propaganda network still controls what is considered common wisdom in huge swaths of the country. The Republican Party has, if anything, become more corrupt and deceptive, treating its voters like marks in a lengthy con job.

The possibility that 2020 could be a repeat of 2016, with Trump winning in the Electoral College while a Democrat wins the majority of votes, is incredibly dire. So it's not surprising that many Democratic donors and activists are starting to wonder if they should value "electability" over other priorities like diversity and progressive policies. Sure, the thinking goes, it might be nice to nominate a woman or a person of color or a strong progressive. But perhaps it would be better to wait for some other time, in the future when Trump's not running, to take that gamble?

Shouldn't Democrats, just this once, play it safe with a white man, preferably a centrist, that can appeal to that tiny sliver of white male working-class Midwestern voters who threw the election to Trump in 2016? Should they eschew more electric choices, like Sen. Kamala Harris or Sen. Elizabeth Warren, for a middle-of-the-road white man like former Vice President Joe Biden?

It makes a certain amount of intuitive sense that Democrats must make a choice between social progress and winning elections. Life is full of compromises and hard choices, after all. Wanting a candidate who checks all the boxes — who is progressive, who advances diversity and who can actually win — feels greedy, like wanting a cheesecake that tastes real but has no calories.

"In short, 'electability' at times ends up being used as an all-purpose cudgel against female and minority candidates," Perry Bacon of FiveThirtyEight wrote in September, even if people who make this argument don't intend that, and don't necessarily want it to be true.

While this electability argument might feel correct, there's simply not enough evidence to back it up. If anything, there's good reason to worry that the kind of candidate that's perceived as "safe" — white, male, centrist — will simply read as "boring" to voters, especially against a drama monster like Trump,.

The key to victory in 2020, Steve Philips of Democracy in Color wrote in the New York Times in November, is "inspiring, mobilizing and turning out voters of color and progressive whites."

In sports, there's a lot of chatter about the difference between playing to win and playing not to lose. Being aggressive in trying to score points or goals, in many sports, can mean opening up your defense to more attacks from the opposition, which can be scary. Playing too defensively, on the other hand, means giving up opportunities to score — and can often mean losing the game.

Politics can be the same way. The hope, of course, is that if Democrats nominate a centrist, demographically "safe" white man, voters who harbor various forms of prejudice or are uncomfortable with "liberal" ideology might convince themselves to support him. But no matter how white or male or centrist Joe Biden is -- sorry, I mean this hypothetical perfect safe candidate -- Donald Trump will point to the majority female, racially diverse, and left-leaning voters behind him and call him a socialist and a "politically correct" stooge.

There's no doubt that candidates of color, female candidates and bold progressives can be polarizing figures. They may turn off a certain number of voters and are more vulnerable to racist and sexist attacks or fear-mongering about "socialism." But these kinds of candidates also attract more attention, more discussion, more debate — and therefore more excitement.

We can see how this played out in the early aughts. In 2004, Democrats — desperate to beat George W. Bush — opted to nominate the "safe" choice, John Kerry. He was a highly qualified presidential candidate with decent values and reasonable positions, of course. But the perception that he was safe ultimately led to the perception that he was bland. Kerry struggled to define himself and his vision, which ironically made it easier for the right-wing propaganda machine to paint him as wishy-washy and a wimp. (Remember the suggestion that he "looked French"? Which was somehow a bad thing.)

In contrast, Barack Obama was seen as a far riskier proposition in 2008. He was black, he had a name many people considered "weird" and he had consistently opposed the Iraq War, which put him on the left flank of his party at the time. Most Democratic politicians had tentatively supported the war in the early days and only switched to opposition once it became clear that the Bush administration was mishandling the whole thing.

Obama was a more polarizing figure than Kerry, obviously. But he clearly inspired far more passion, both good and bad. And while there are a number of reasons that Obama won in 2008 and Kerry lost four years earlier, that passion unquestionably mattered, as he turned out huge numbers of voters who were excited to back him. Hillary Clinton, in turn, lost the 2016 election in large part because a big chunk of those same voters — 4.4 million in total, and disproportionately black — did not feel inspired and simply didn't turn out.

People "often assume that what 'electability' means is the ability to win over blue-collar white Midwesterners," data analyst David Byler wrote in the Washington Post in February, but there's a certain built-in racism beneath that presumption. As Byler pointed out, there "are also votes to be gained among Asians, Hispanics, blacks and college-educated whites across the country."

He also notes that "if Clinton had replicated Obama’s performance among black voters in 2016," she would likely have "won Michigan, Wisconsin, Pennsylvania, Florida and North Carolina" and therefore the presidency.

Whoever the Democrats nominate next year will be up against Donald Trump (assuming he remains in office that long). That's all the more reason to look to someone who is inspiring but polarizing over someone who feels "safe" but may read as boring to the public at large. Trump, like it or not, is a black hole of attention. His reality TV antics and erratic behavior will dominate the news cycle in 2020, just as in 2016. If anything, his stress levels and his evident (and justified) fear of going to prison if he leaves the White House will only drive him harder to control the news cycle with an endless series of tantrums and stunts.

It's going to be tough for any Democratic candidate to break through and get attention to his or her agenda, when they're forced to compete directly with the Trump Show.  That will be nearly impossible for a candidate whose main quality is that he's the safe, normal, grown-up choice. (All attributes we overwhelmingly associate with white men.) A candidate who is not white or not male, and/or has bold, big ideas, will certainly be provocative. But without being provocative, getting attention in a Trump-centered media landscape might be impossible.

The 2018 midterm elections should put to rest any concerns that boldly progressive messaging or diverse candidates are a threat to Democratic prospects, rather than a bonus. Instead of being cautious in 2018, Democrats put up what may be the most diverse candidate field ever, and the result is that they won at least 40 seats in the House of Representatives and sat the most diverse Congress in American history.

As Phillips pointed out in his New York Times article, Democrat Stacey Abrams got more votes in her 2018 gubernatorial run "than any other Democrat running for any office in the history of Georgia," besting even the performance of presidential candidates. Abrams likely would have won, too, if the election had been fair and on the level. Her identity as a black woman with strong progressive values no doubt turned off some white voters in the state. But the excitement she generated more than made up for the difference.

During that same election, moderate Democrats running supposedly safe Senate campaigns in Florida, Indiana, Missouri and Tennessee, as Phillips also points out, all ended up losing.

In fairness, it's tough to say for certain what the winning formula is in presidential elections. There are so many different variables at work in any election, and most of them — the economy, cultural changes, wars and terrorist attacks, even the weather — will be out of the control of either party or either candidate.

Perhaps the best thing for primary voters to do, then, is what they did in 2008: Vote for the candidate who appeals to you the most and hope for the best. That strategy worked out well that time around, because it turns out that one of the best metrics for whether someone is "likable" or "electable" is that people like voting for them and they win elections.