Psychiatrist on Trump: "The president deserves medical standard of care, and he is not getting it" 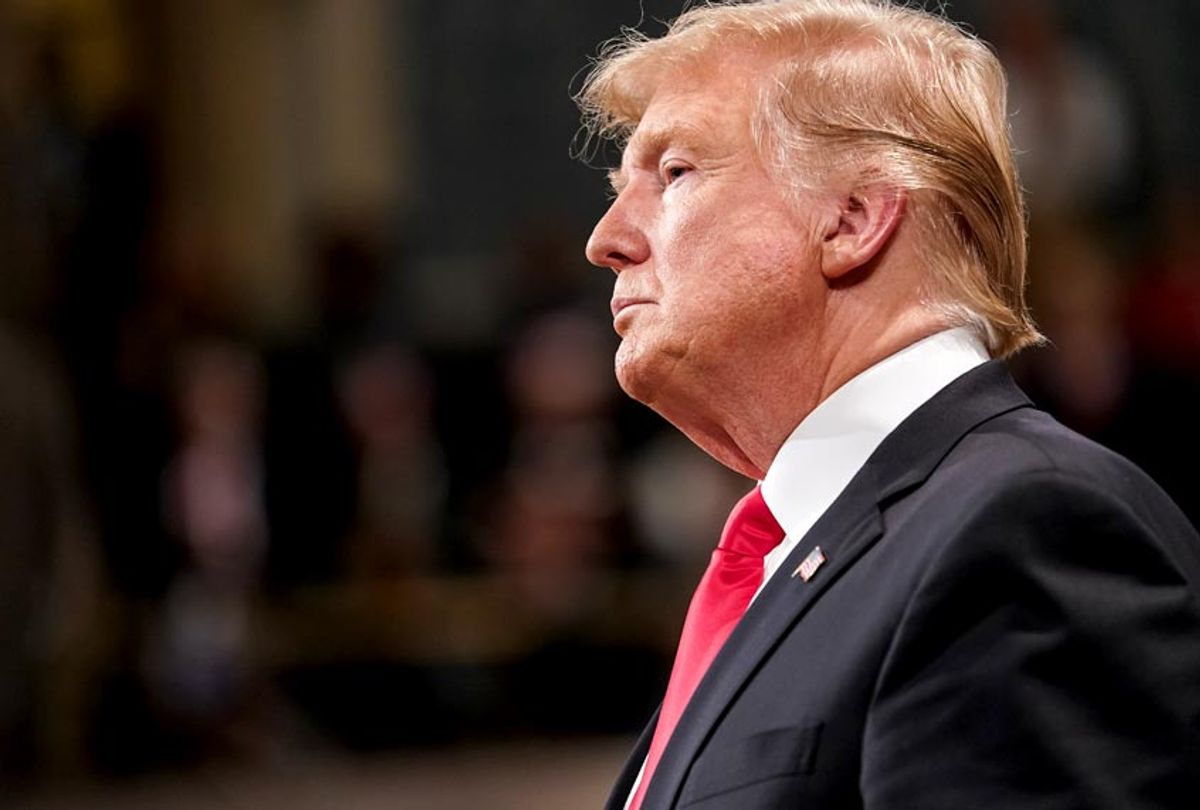 On Tuesday, President Donald Trump attacked Democrats for conducting investigations into potential misdeed by the Trump campaign and administration.

“The greatest overreach in the history of our Country,” Trump tweeted. “The Dems are obstructing justice and will not get anything done. A big, fat, fishing expedition desperately in search of a crime, when in fact the real crime is what the Dems are doing, and have done!”

The attack on Democrats echoed his rambling speech at CPAC over the weekend, in which the President accused Clinton foundation staffers of being killers.

Lee is a forensic psychiatrist at Yale School of Medicine who teaches at Yale Law School. She edited the New York Times bestseller, “The Dangerous Case of Donald Trump: 27 Psychiatrists and Mental Health Experts Assess a President,” to be released in an expanded edition later this month. She is president of the World Mental Health Coalition and currently organizing an interdisciplinary conference with top experts of multiple fields from around the country, to happen in Washington, DC, on the date of the book’s launch.

Raw Story: President Trump’s CPAC speech seems to have brought his mental health back into the spotlight over the weekend. Lawrence O’Donnell even quoted from your book the other night. What are your thoughts about the speech?

Bandy X. Lee: A member of the public asked, “When Donald Trump wrapped his arms around the flag, it evoked Lennie from Of Mice and Men squeezing the mouse until it’s dead. Is the president going to destroy our country?”

I didn’t tell her this, but my answer would have been that he is well on the way, as long as we let him. How are we letting him? By colluding on the most basic point: by telling ourselves that the mental unwellness we see is not what we are seeing. Allowing him to give as long a speech as he did, allowing him to continue on Twitter, allowing him to remain in his position, and allowing his staff to turn over so that he has no one left but those who enable his illness—all this is the opposite of the proper treatment that he needs.

Containment and removal from access to weapons, urgent evaluation, and then the least restrictive means of management based on the evaluation, is the medical standard of care.

Even the president deserves medical standard of care, and he is not getting it. The natural course of disease is that it will engulf the afflicted persons and lead them to destruction, if left without resistance. In medicine there is no difference between physical and mental disease, but mental disease will be experienced differently in that the afflicted person willingly, even fervently, goes to her destruction, bringing others down in the process.

I have a colleague at the World Health Organization, Dr. Gary Slutkin, who approaches this human destructiveness as an infectious disease. If we do not treat this phenomenon as an affliction of the mind, a symptom, but rather as a political strategy or an otherwise “normal” process, then we will surely lose. Think about not containing an Ebola infection and allowing it to spread freely; the image may be horrifying, and yet we are dealing here with something much more dangerous than Ebola.

Raw Story: How do you tell disease apart from healthy choices?

Bandy X. Lee: Often it takes a specialist with a lot of experience to make the distinction, since disorders are usually not entirely new but are extremes of traits that many people normally have. You have to know to what degree that constitutes pathology.

You also have to know a little bit about what the different diseases look like. A cancer cell, on its own, looks very healthy and is very efficient in sucking up all the nutrients around it and reproducing rapidly—it looks like success, but it eventually depletes the organism supporting it and brings everything down, including itself.

Raw Story: Trump tweeted, “The Dems are obstructing justice and will not get anything done. A big, fat, fishing expedition desperately in search of a crime, when in fact the real crime is what the Dems are doing, and have done!” He calls it “PRESIDENTIAL HARASSMENT.” What do you make of his words?

Bandy X. Lee: In mental disease, a useful clue is the level to which the person denies any possibility that something could be wrong with oneself. If one denies it vehemently, then that is already a clue. After a certain point, you start using the formula of taking the opposite of what the person is saying to be true, and taking all assertions to be projection—and by now I have more high-quality data on Mr. Trump than any patient I have ever treated. So what he is really saying is: “I will obstruct justice, since it looks like they are getting a lot done. I’m on a big, fat fishing expedition in search of a way out of this, since I know the real crime is what I am doing, and have done.”

When he calls Democrats “angry, angry people…. All killers,” he is giving us information that he is an angry, angry person who is akin to being a killer. So when mental health professionals come out with assessments about the president’s dangerousness or mental impairment, we are not trying to call him names but applying scientifically validated formulations that make revelations about him, such as chaos in the White House, very unsurprising.

Seasoned professionals knew it all from the start. This is why the law in all 50 states gives us the right to contain someone who presents enough psychological evidence to be a danger, whereas law enforcement can only do so after something has happened.

This past week was symbolic of two of the greatest dangers of this presidency: those of nuclear war and of civil war. We cannot expect a leader who is highly attracted to nuclear weapons and war to continue efforts toward peace when they do not bring him distraction or accolades, and when his former fixer Michael Cohen said there may never be a peaceful transition were Mr. Trump to lose in 2020, I cannot say I disagree.

Raw Story: What can we do?

Bandy X. Lee: We really need to begin with a proper evaluation. Medical evaluations and legal investigations have a lot in common, as I have learned from teaching at a law school for over 15 years. You gather evidence to support each of your statements, make use of precedent for your current evaluation (in medicine, this is scientific research and observation over multiple similar cases), and dispense the right treatment based on your discoveries.

This is our grounding in reality, and the reason why Congress, it seems to me, is focusing heavily on the special counsel’s investigations, even though you do not need criminal indictment to proceed with impeachment, for example. Similarly, Section 4 of the 25th Amendment may not need a medical finding to be implemented, but medical evidence is what grounds it in reality and keeps it from becoming a purely partisan game.

Medical professional opinion is admissible in court as evidence; in other words, it has the status of fact. A former White House counsel told me that “Capacity” should be up there with “Corruption” and “Collusion”, and I thought that was a very astute observation. Just as there is the Robert Mueller investigation, there should be an evaluation of the president’s mental capacity. Yet, Mr. Trump’s new White House doctor, with his “11 different Board certified specialists,” did no valid mental health assessment.

The American Psychiatric Association—which I criticize often because the public needs to know what information it is being depriving of—confounded “professional opinion” (a diagnosis) with “any opinion of a professional,” blocking a whole profession from saying a word about this president (the rule used to prohibit only diagnosis). Even the New York Times selectively published a handful of psychiatrists willing to say that the president is “just a jerk” or “does not have narcissistic personality disorder” or that psychiatrists have nothing to offer—and they are all connected to the APA.

In fact, the whole Editorial Board came out with a statement early last year that mental health professionals have nothing to offer about the president—without being an expert, how do they know the limits of the expertise? The ethics of being an expert is first to state the limits of your knowledge—it is not for a newspaper to say. This is actually egregious, and I equate it to the moment when the paper failed to warn against Nazism by burying reports about it.

Clinical psychologist Elizabeth Mika describes tyranny as a “beast” that encroaches on us as a steady creep until it is too late.

Our public-service book, to which she contributed, had three warnings: that the president’s condition was worse than it seemed, that it would grow worse over time—either power granted to illness or frustration of that will to power will do that—and that he would eventually be uncontainable. We are beginning to enter the third stage, and what I meant by it was that his pathology would spread, through his influential position, so that the country would become no longer able to save itself. When a clinician has a patient who is growing psychotic—that is, losing touch with reality—the clinician examines what is called “reality testing.” If a patient can no longer look at facts and reality and adjust his perceptions and beliefs accordingly, then you worry about the patient literally becoming unhinged from reality. At that point, the person will run as far from evaluation and treatment as possible, and healing can only come from outside intervention. The growing conspiracy theories, false “news”, and the refusal to accept facts and expertise should worry us all—every day we are falling more deeply into it, and 2020 may be too late for us to recover.