Republicans lied about Hillary Clinton and covered up for Trump for two years. Now they will reap the whirlwind 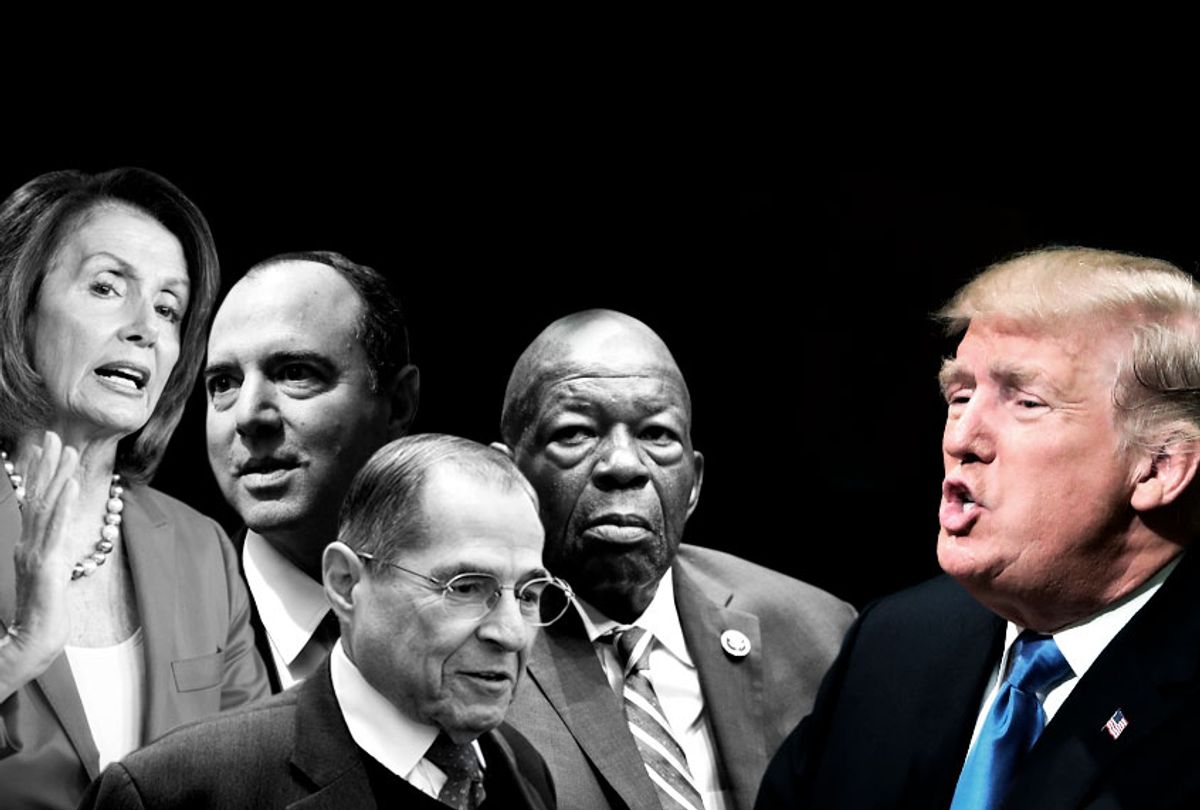 During the last month of the 2016 presidential campaign, Donald Trump took to issuing a stern warning to America about what they could expect to face if Hillary Clinton were to be elected president.  In Cedar Rapids, Iowa, he noted the reopening of the email case and called it the "biggest political scandal since Watergate." In Miami, he told the crowd, “if Hillary Clinton were to be elected, it would create an unprecedented and protracted constitutional crisis. Haven’t we just been through a lot with the Clintons, right?” Later that day in Orlando he upped the ante, saying, “Hillary is likely to be under investigation for many years, probably concluding in a criminal trial.”

Two days later in Denver, Trump made the argument even more explicit:

Her current scandals and controversies will continue throughout her presidency and we will make it -- honestly, look, it's gonna be virtually impossible for her to govern. Now, the Republicans have talked very tough and the Democrats. ... It's gonna be just another mess for another four years, folks. A mess. We've got to get back to work, right? I mean, we have to get back to work.

He wasn't the only one making this argument. Republicans were basically telling the country that if Clinton were to be elected they would make her life a living hell. Rep. Jason Chaffetz of Utah, then slated to be the next chairman of the House Oversight Committee, told the Washington Post, “Even before we get to Day One, we’ve got two years’ worth of material already lined up. She has four years of history at the State Department, and it ain’t good.” House Speaker Paul Ryan backed him up, and GOP candidates across the land gleefully promised to begin investigations immediately.

On the day before the presidential election, the Post reported that Republicans were already planning an impeachment inquiry:

And a third senior Republican, the chairman of a House Judiciary subcommittee, told The Washington Post he is personally convinced Clinton should be impeached for influence peddling involving her family foundation. He favors further congressional investigation into that matter.

Sen. Ron Johnson, R-Wis., had already made up his mind, telling his local paper, “I would say yes, high crime or misdemeanor, I believe she is in violation of both laws.” Rep. Michael McCaul, R-Texas, chair of the Homeland Security Committee, said he believed Clinton had committed treason with her email server.

This was a very effective campaign tactic, and I would guess that more than a few voters were concerned. Republicans made it very clear that if Clinton won they were preparing to launch the political equivalent of a nuclear war. If people wanted to avoid that they should probably vote for Trump and skip all the unpleasantness.

On the day of Trump's inauguration, Chaffetz posted a picture of himself shaking hands with Hillary Clinton at the ceremony and captioned it this way:

For mysterious reasons, Chaffetz soon gave up his seat in Congress, but Republicans carried on. The oversight committees spent most of their time during the last two years blocking and covering for Trump and the Russia investigation, but they have kept up their insinuations about Clinton. Trump's ecstatic crowds still chant "lock her up" at the mere mention of her name.

I mention all this ancient history just to put in context all the absurd whining and caterwauling by the president and his minions over what he has taken to calling "presidential harassment." They can dish it out, but they sure can't take it. I'm afraid they are going to have to buckle up, because their turn in hell has finally come.

Last week's astonishing testimony by former Trump Organization executive vice president Michael Cohen was just the opener. On Monday, the House Judiciary Committee sent out requests to 81 different Trump associates asking for documents pertaining to a dozen different scandals that were bottled up by the Republicans in the last Congress, all pointing to possible abuse of power and obstruction of justice by the president and his henchmen.

These requests went out to virtually every name the media has mentioned in relation to the 2016 Trump campaign and the Trump Organization, as well as the White House and various GOP outside actors. They are asking for information regarding contacts with Russians, Trump's private meetings with Vladimir Putin, the June 2016 Trump Tower meeting, the Trump Tower Moscow project, Cambridge Analytica, foreign emoluments, hush money, pardons, sanctions and much more. And that was just from Rep. Jerry Nadler's Judiciary Committee. The Intelligence, Finance, Foreign Affairs, Ways and Means, and Oversight committees are also following their own leads, which include the issues with Jared Kushner and Ivanka Trump's security clearances, the Trump Organization's Deutsche Bank loans and the president's tax returns.

The White House calls this a fishing expedition, but that's not correct. The whole country has been watching these scandals unfold in the press while the authorities operate (as they should) without comment. The evidence is out there but the press cannot compel people to speak, nor can they put the whole story in context. At this point, we don't even know when or if special counsel Robert Mueller's report on the Russia probe will be fully revealed to the public. This is the Congress doing its job at long last. With this president, it's a very big job.

The Republican House did absolutely no oversight of the Trump administration in its first two years, making a mockery of its constitutional duties. From every point of view, including sheer politics, that was a big mistake. Had they even attempted  a pretense of oversight of the White House, the Category 5 hurricane that just hit the administration might have been downgraded to a tropical storm. Instead, the president is going into his re-election campaign not only facing the results of criminal investigations from the special counsel and various U.S. attorneys but also dealing with an onslaught of pent-up inquiries from Congress.

Assuming that Trump is on the ballot in 2020, don't be surprised to hear the Democratic nominee on the stump saying, "It's gonna be just another mess for another four years, folks. A mess. We've got to get back to work, right? I mean, we have to get back to work.” That person will be right. This long list of investigations the Democrats have launched at long last is just the tip of the iceberg.