Ben Affleck is the best thing in "Triple Frontier," a clunker of a heist film

In this pale imitation of “High Risk,” Oscar Isaac and Charlie Hunnam are sadly underused 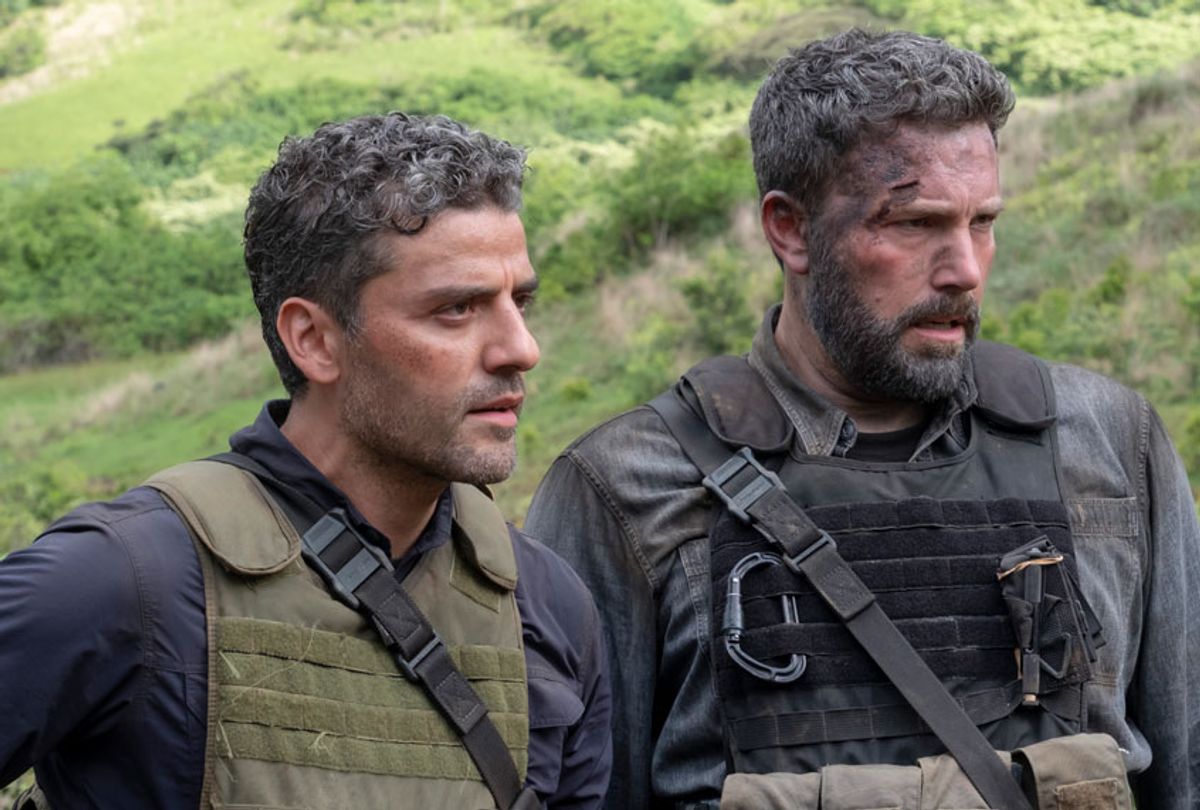 “I told you this was a stupid idea,” says one character in the criminally mediocre “Triple Frontier.” His buddy responds, “You sure did!”

Boy were they right — director/co-writer J.C. Chandor’s action heist film is more enervating than exciting. The pre-title sequence features an explosion, a shootout, and a chase scene and then . . . almost no action for an hour. Instead, viewers are treated to a series of extended scenes featuring Santiago “Pope” Garcia (Oscar Isaac) tracking down his old Special Forces crew members and convincing them to cowboy up and use their skills for their own benefit. The job — and of course it's going to be Pope's last one — is to take out Latin American drug kingpin Gabriel Martin Lorea (Reynaldo Gallegos) and take the money he’s hiding in his house in the jungle.

Pope’s pals include Francisco “Catfish” Morales (Pedro Pascal), the pilot — never mind his license has been revoked — William “Ironhead” Miller (Charlie Hunnam), and his MMA fighting brother Ben (Garrett Hedlund), who oddly does not have a nickname. The glue in the group is Tom “Redfly” David (Ben Affleck), who is in debt and failing at selling real estate when Pope turns up with an offer he shouldn’t refuse. It’s high risk, but the job promises high reward.

No such reward for viewers of “Triple Frontier,” which is feels like a pale imitation of “High Risk,” a terrific but all-but forgotten 1981 action-comedy starring James Brolin and James Coburn about a quartet of friends who go to South America to steal money from a drug lord and have no trouble getting the money, but plenty of trouble getting it home. Chandor’s film, co-written by Mark Boal (“Zero Dark Thirty”), follows a similar plot.

When “Triple Frontier” gets around to having the men pull off the robbery, they struggle to pull off the plan. It’s hard not to recall George Bluth Sr.’s sage advice, “There’s always money in the banana stand.” And after they leave the kingpin's house, more obstacles come crashing in. An encounter with villagers in which tensions escalate, shots are fired, innocent people die, and money changes hands may prompt viewers to consider the implications of colonialism, American hegemony, and other related political issues. But that would be overreaching. Chandor doesn’t seem interested in social justice, but more importantly, he doesn’t seem to have any sense of fun. There is no witty banter or joking between the guys. They are all way too earnest and serious. “Triple Frontier” is a slog—not just for the men hiking through the rough Andes terrain with bags of money, but for audiences as well.

The action set pieces in particular are ploddingly dull. On a pass along the thin ridge of a mountain, one can practically guess the exact moment when things will go wrong. Then it is only a matter of time before the guys start blaming each other and the macho in-fighting begins. If any of these scenes were done with a wink or a nod to action film tropes, “Triple Frontier” might be an enjoyable B-movie with A-list stars, but Chandor's film seems unable to muster up any real energy.

One of the problems may be that the characters are woefully underdeveloped. The camaraderie the men are supposed to share never comes across on screen. Oscar Isaac’s Pope lacks charisma, and as the leader of the group, he fails to inspire much enthusiasm. Charlie Hunnam is wasted playing second banana, and is not given much of anything to do except bleed and talk tough. Garrett Hedlund and Pedro Pascal are also too-vaguely defined characters. They serve their purpose as the story demands, but never engage or distinguish themselves. The sole exception is Ben Affleck, whose character, Tom, gets a backstory of a failed family, debt and a dead-end job. Tom is such a sad sack that his character sparks to life when he plots how to pull off this possibly-impossible mission. It is saying something about “Triple Frontier” that Ben Affleck gives the film’s best performance. To damn with even fainter praise, “Triple Frontier” is almost “Reindeer Games” bad — which is to say, not good-bad, just bad.

“It is what it is,” says one character in the film, and his thought is echoed by another. And therein proves what is wrong with Chandor’s disappointing film. It is what it is, and it never tries to be anything better. Moreover, the characters feel they deserve the money they are stealing. “Triple Frontier” deserves to be forgotten and ignored. Try to find “High Risk,” and watch it instead.