Did Michael Cohen angle for a pardon? Maybe so, but that doesn't invalidate his testimony

It's only natural that Michael Cohen's legal team tried to save him. But clinging to Donald Trump never works 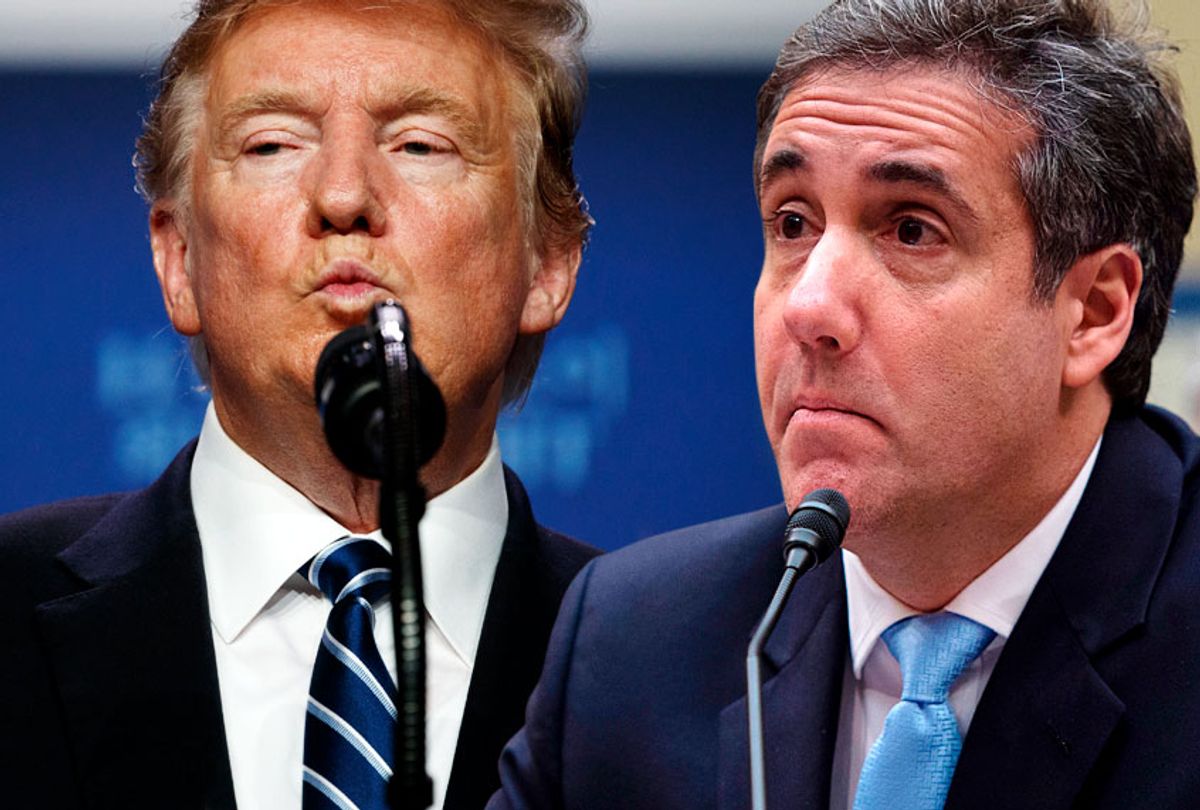 A new Quinnipiac University poll released on Tuesday found that 64 percent of Americans surveyed said they believed Donald Trump had committed crimes before he became president -- and that even included 33 percent of Republicans. The country is split on whether or not Trump has committed crimes while in office, which isn't exactly good news for the president either.

Even more astonishingly, the poll also asked whether people believe the president of the United States or the convicted perjurer Michael Cohen -- and by a margin of 50 to 35 percent they said they believed the convicted perjurer. This no doubt comes as a relief to prosecutors and Cohen's legal team as the president's team begins to fight back against Cohen's accusations.

In the House Oversight Committee hearing last week, Rep. Jim Jordan of Ohio, the ranking Republican member, kept questioning Cohen about his contention that he had been happy to accept the job as the president's personal lawyer rather than a job in the administration. His accusation was clear: Cohen was pursuing a vendetta against Trump because he'd been passed over. This made little sense since Cohen has bigger problems these days than whether Trump failed to give him a promotion.

The day after the hearing a British tabloid ran a story claiming that Cohen had written a "manuscript" extolling Trump's virtues. This turned out to be nothing more than an abandoned book proposal, written before Cohen was targeted by the FBI. That didn't stop Trump from tweeting about it several times, as if it proved anything that his longtime lawyer had once said all kinds of nice things about his boss and is now saying something quite different in sworn testimony. We knew all that.

Apparently, Trump and the Republicans on the Oversight Committee didn't understand that Cohen's testimony under oath was full of admissions that he'd lied and done far worse things for years when he was working at the Trump Organization. He wasn't hiding it. Cohen once said he'd "take a bullet" for Trump. He now says that was a mistake -- and half the country believes him, with another 14 percent keeping an open mind.

There have been various other attempts to show that Cohen is still lying, but not much that might be considered to have teeth. But on Monday, the Wall Street Journal reported that Cohen's lawyer had approached the president's legal team, feeling them out over a possible pardon, back in the spring of 2018, right after Cohen was served with several search warrants. Cohen had testified that he had never asked for a presidential pardon and would not accept one.

Cohen and his legal team at that time had an unusual relationship.  The Trump Organization had agreed to pay both the law firm representing him and the special master who had been assigned to review the thousands of documents seized in the raids on Cohen's office and homes to remove those that would involve attorney-client privilege. The bills piled up quickly and Trump reportedly balked at paying them (of course,) so Cohen's attorneys decided to leave the case last June. By July, Cohen had hired new lawyers and had decided to cooperate.

Those few weeks in which they were all sharing information is when Cohen's lawyer, Stephen Ryan, allegedly spoke to Trump's personal attorney, Rudy Giuliani, about a pardon.  Ryan isn't talking. Giuliani is, telling this to the Washington Post:

I can’t confirm or deny whether I had a conversation with any of the attorneys because it’s attorney-client privilege, but what I can say is that I’ve said the same thing to everyone, privately and publicly, which is that the president is not considering pardons at this time. The president, as he has said, will not consider pardons during this time. It’s not on his mind. He’s not thinking about it.

Obviously, they aren't ruling out pardoning anyone, even today. But that's been a big part of Trump's strategy from the beginning. Those search warrants were served on Michael Cohen on April 9. Just 10 days before that, the New York Times had reported that Trump attorney John Dowd had discussed pardons with the lawyers for Michael Flynn and Paul Manafort, so the issue was already in the air when Cohen got nabbed.

As things began to heat up with the Cohen case, so did the public talk of pardons.  By the end of May, it was a major topic in the press. Trump pardoned right-wing provocateur Dinesh D'Souza, and told reporters he was also thinking of commuting the sentence of disgraced former Illinois Gov. Rod Blagojevich and issuing a pardon to Martha Stewart. Eli Stokols of the Los Angeles Times told Nicolle Wallace on MSNBC Tuesday that the conversation had been off the record but Trump made a point of telling the journalists present that they could print that particular comment.

Trump's old friend Roger Stone put it all right out there:

It has to be a signal to Mike Flynn and Paul Manafort and even Robert S. Mueller III: Indict people for crimes that don’t pertain to Russian collusion and this is what could happen. The special counsel has awesome powers, as you know, but the president has even more awesome powers.

On June 15, after Manafort was sent to jail for witness tampering, Giuliani told the New York Daily News that “when the whole thing is over, things might get cleaned up with some presidential pardons.”

The Washington Post reported on Tuesday on conversations with an anonymous source close to Cohen:

Cohen has not alleged that he was offered an explicit quid pro quo that would tie a pardon to his cooperation with law enforcement, the person said. The person said Cohen felt that Trump’s team was using innuendo and suggestion to imply there would be a benefit for his loyalty.

This tracks with Cohen's testimony about the way Trump generally does business. Like a mob boss, when he is involved in something nefarious he speaks in code that the people around him understand. When you look back to that period, it's easy to see why Cohen would believe a pardon was on the table. It's even easy to see why his lawyer would mention it in a meeting with the joint defense attorneys. The New York Times had already reported that it was open for discussion.

Attorney General William Barr wrote a memo to the White House in which he made the case that a president cannot obstruct justice simply by exercising his executive power. But there is at least one exception in his mind.  During Barr's confirmation hearing, Sen. Patrick Leahy, D-Vt., asked whether a president can "offer a pardon in exchange for a witness's promise not to incriminate the president." Barr answered, "No, that would be a crime."

We may never sort out what actually happened with Cohen and the lawyers, and we already know how unlikely it is that Trump will be charged with a federal crime, at least until he leaves office.  But you can bet that his last act as president will be to pardon himself for all federal crimes, an action that may or may not pass constitutional muster. He'd still have to take his chances with the state of New York, which isn't covered by a presidential pardon.