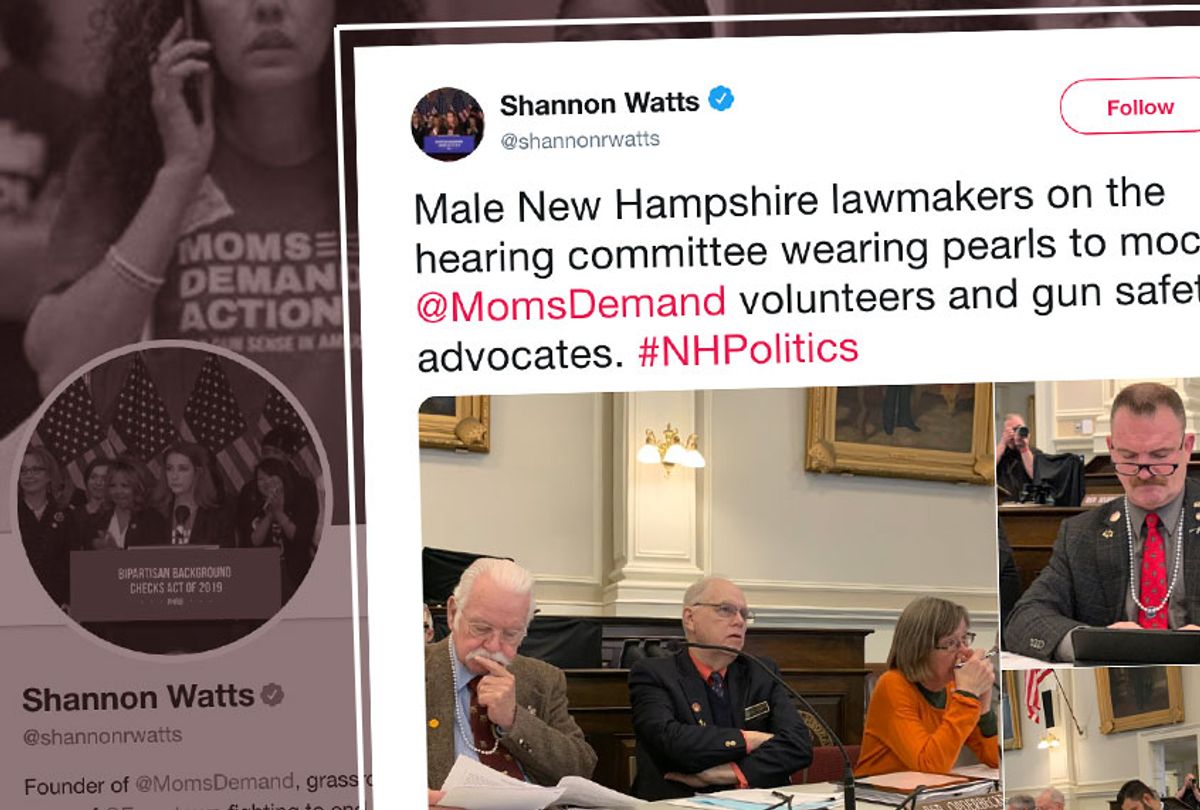 Watts posted photos of the lawmakers at a Tuesday hearing on a red flag law that would allow the state to confiscate guns from people who are a risk to themselves or others.

Kimberly Morin, president of the pro-gun Women’s Defense League of New Hampshire, told the New Hampshire Union Leader that her group has worn pearls to gun-related hearings since 2016.

“At the hearing for constitutional carry in Reps Hall, three of us were dressed in business professional clothes, wearing pearls, and someone from Moms Demand said they wouldn’t testify because they felt they were in front of a firing squad,” Morin said. “So we’ve been wearing pearls in defense of women’s rights and the Women’s Defense League since then, because we are moms just like they are only on different sides.”

The group presented Gov. Chris Sununu with pearls after he signed the concealed carry bill into law, The Union Leader added.

Republican Rep. David Welch told the outlet that the Women’s Defense League handed out the necklaces as members entered the room.

“The anti-gun out-of-state lady and the other anti-gun folks need to get over themselves,” Burt told TalkingPointsMemo. “This had nothing to do with them. It is to support the Women’s Defense League and the good they do to train women to protect their children.”

“They are to support the WDL. That is it,” he added. “The anti-gunners need to get over themselves. Sorry, they were not the reason we had them on.”

Watts rejected the Republicans’ explanation and told the Union Leader that “these lawmakers decided to wear symbols that essentially mocked the process.”

“They made light of this very important law that has been passed in nine states in the past year, and signed by Republican and Democratic governors alike,” she said. “They showed they were not coming to this hearing with an open mind, and they were making light of survivors who were testifying on the suicide of a child, or women who were survivors of domestic abuse.”

Democratic Rep. Debra Altschiller, who sponsored the red flag bill, said that she was “disappointed in the pearl clutching” by Republicans.

“There are families who have lost loved ones here & this mocking prop shows how little they empathize with suicide,” she wrote on Twitter.

Some 2020 Democratic hopefuls weighed in on the issue as well.

Sen. Cory Booker of New Jersey wrote that “moms who want to keep their kids safe don’t deserve this” as he shared Watts’ post.

“Too many guns are falling into the hands of dangerous people, threatening kids' lives and making our communities less safe,” wrote Sen. Kamala Harris of California. “These moms are fighting to confront gun violence and protect our children. They don't deserve to be mocked.”

New Hampshire's first-in-the-nation presidential primary, in which both Harris and Booker plan to compete, is roughly 11 months away.

Watts told the Washington Post that she hopes her group’s members challenge the lawmakers who wore the pearls at the polls.

“It’s my hope,” she said, “that the Moms Demand Action volunteers who sat through the hearing today will consider running against the men who had the audacity to mock the legislative process.”