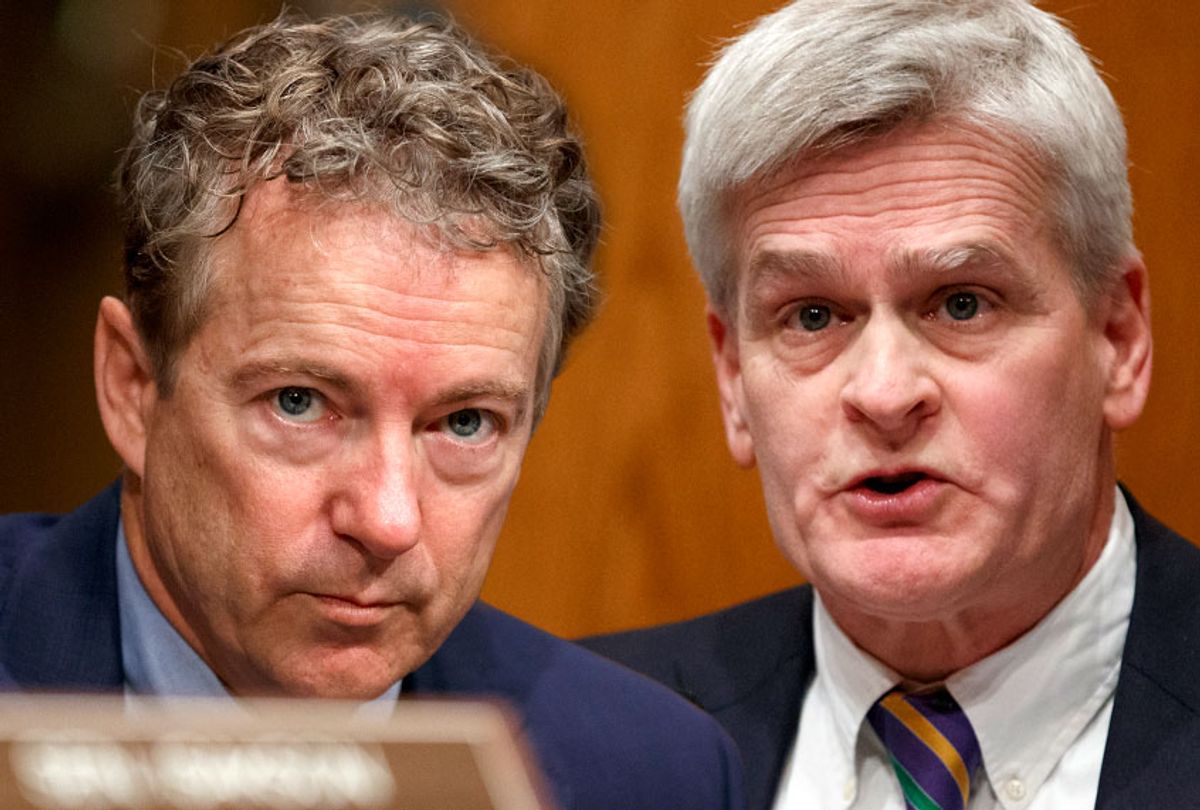 Sen, Bill Cassidy, R-La., a longtime physician, hit out at his Republican colleague Rand Paul for questioning the science behind vaccines during a Senate hearing Tuesday.

Paul, who is an ophthalmologist himself, criticized the idea of requiring parents to vaccinate their children during a hearing of the Senate Committee on Health, Education, Labor and Pensions called “Vaccines Save Lives: What Is Driving Preventable Disease Outbreaks?”

Paul said he was against giving up personal liberty for the “false sense of security.”

“As we contemplate forcing parents to choose this or that vaccine, I think it’s important to remember that force is not consistent with the American story, nor is force consistent with the liberty our forefathers sought when they came to America,” he said. “I don't think you have to have one or the other, though. I'm not here to say don’t vaccinate your kids. If this hearing is for persuasion I’m all for the persuasion. I’ve vaccinated myself and I’ve vaccinated my kids. For myself and my children I believe that the benefits of vaccines greatly outweigh the risks, but I still don’t favor giving up on liberty for a false sense of security.”

But Paul did not just speak out against mandatory vaccines, he insisted that vaccines themselves are dangerous.

“It is wrong to say that there are no risks to vaccines,” Paul said. “Even the government admits that children are sometimes injured by vaccines.”

The consensus view of medical professionals and the government is that the benefits of vaccines drastically outweigh the limited risks they pose. Many of Paul’s claims were similar to those made by science-denying "anti-vaxxers" who claim that MMR vaccines cause autism. A study of hundreds of thousands of children published this week found that kids who receive the MMR vaccine are actually less likely to develop autism than those who do not.

“Now proponents of mandatory government vaccination argue that parents who refuse to vaccinate their children risk spreading these diseases to the immunocompromised community,” he declared. “There doesn't seem to be enough evidence of this happening to be recorded as a statistic.”

Paul made this claim after medical experts said lack of vaccinations contributed to measles outbreaks in New York, Texas, Washington and other states.

Cassidy used his remarks at the hearing to hit out at Paul’s claims.

“You may or may not know I am a physician,” Cassidy said. “I have seen people who have not been vaccinated who have required liver transplantation because they were not, and who have ended up with terrible diseases for no other reason than they did not understand vaccination was important.”

Cassidy rejected Paul’s suggestion that unvaccinated people do not put others at risk.

“Hospitals commonly require their employees to be immunized, because they understand that herd immunity is important, and if a nurse’s aide is not immunized, she can be a Typhoid Mary, if you will, bringing disease to many who are immunocompromised,” Cassidy explained.

Cassidy went on to defend requiring parents to vaccinate their children if they want to send them to school.

“The requirement is just that you cannot enter school unless you’re vaccinated,” Cassidy said. “Now, if you’re such a believer in liberty that you do not wish to be vaccinated, then there should be a consequence, and that is that you cannot infect other people.”