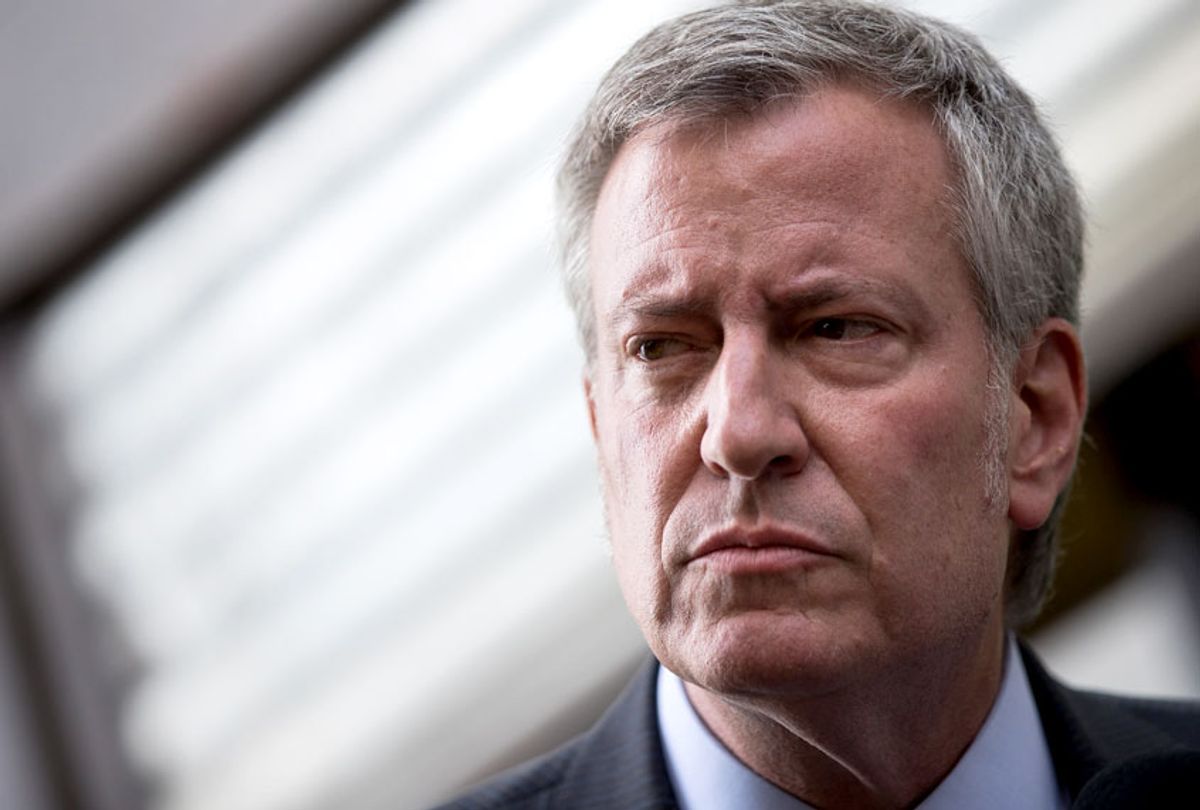 Even as Mayor de Blasio takes trips to New Hampshire and Iowa to burnish his national reputation as a progressive, city public-employee unions are spending nearly $1 million to offer voters a very different take on his job performance.

This story originally appeared in The Chief

For John Samuelsen, the international president of the Transport Workers Union, the local newspaper ads in early-voting states is a wise investment in helping to shape the 2020 Democratic field and to correct what he believes are misconceptions about Mr. de Blasio’s record.

“I think he is a fauxgressive, not a progressive,” Mr. Samuelsen said in a phone interview. “He’s the exact kind of Democrat that got Trump elected, and he’s exactly the kind of candidate that if he gets traction in the primary will get Trump re-elected.”

ANTI-WORKER AND ANTI-UNION:  This Transport Workers Union ad harpooning Mayor de Blasio for not living up to the progressive ideals he has espoused is part of an effort by some labor groups to embarrass him in national forums and derail any hopes he may harbor of becoming a contender for the Democratic nomination for President.

He continued, “He’s in bed with non-union developers and the billionaire class. He’s an elitist that has this mix of the social liberal with the corporate Democrat, and that approach is a sure loser for us in states we need to win in, like Florida, Pennsylvania, Ohio, Wisconsin and Michigan.”

In 2016, the TWU was one of a handful of labor unions to endorse Vermont Sen. Bernie Sanders over former Secretary of State Hillary Clinton in the Democratic primaries. It has yet to make a 2020 endorsement, but Mr. Samuelsen thinks a Sanders-like message is  required to carry the states where Mr. Trump was able to make inroads in traditionally pro-union areas. “The working class is over and done with corporate Democrats,” he said.  “Sanders has that edgy class-oriented economic-security message for working people.”

In response to the TWU leader's critique, Raul Contreras, a spokesman for the Mayor, said he had a progressive track record of which the  city could be proud. “Pre-K and 3-K for all, mandatory paid personal leave, significant job growth, low crime and the lowest jail population since 1980. That’s a pretty good record they’re attacking,” he said.

The TWU is not the only union spending hundreds of thousands of dollars to share its take on Mr. de Blasio with an audience beyond the five boroughs. On Feb. 25, District Council 37’s Locals 2507 and 3627, which represent Emergency Medical Service workers, took out a full-page ad in the New York Times blasting the Mayor for comments he made justifying a $35,000 pay gap between Emergency Medical Technicians and Firefighters because their work was “different

In the ad, headlined “Different Means Not Equal,” the unions recounted an exchange the Mayor had with a reporter on Jan. 17 about the pay disparity between EMS and other first-responders. Addressing Mr. de Blasio directly, the unions wrote, “You stated, ‘I think the work is different.  We are trying to make sure people are treated fairly and paid fairly, but I do think the work is different.’ This answer has sparked outrage from emergency service workers in New York City and across the country.”

Oren Barzilay, president of Local 2507, which represents EMTs and the higher level of the title , Paramedics, said in a phone interview that the Mayor’s position contradicted his campaign pledge to advance economic justice under his “Tale of Two Cities” platform.

“We always hear him talking about equity and fairness, but it appears that was just talk with ho substance,” he said. “If he has aspirations to become the leader of the nation, how can he do that without solving the problems he has in his own city?”

At least one veteran public-union leader, reacting to the Times ad, said on background that he was skeptical that the EMS unions’ strategy would move the needle for their members at the bargaining table.

Time Right to Weigh In

But according to Doug Muzzio, a Professor of Political Science at Baruch College, the unions’ expenditure was a wise investment that was strategically timed because the presidential primary field was in flux and the issues that would shape the campaign were still being defined.

“I think it is an opportune time for labor to trumpet its message, and they will have to do it through social media as well,” he said. “It looks like there is a glimmer of hope for them in the current political climate. Now, they have to drive a truck through that hole, and they have to do everything now…because it is a tumultuous time before the actual voting starts and the primaries and caucuses are fully underway.”

Mr. Muzzio added that there were no long-term negative political consequences for the unions rebuking the lame-duck Mayor on the national stage. “I don’t think it is a big problem, because his presidential prospects are between slim and none, and ‘slim’ is now in Texas,” he said.

Mr. Barzilay said that there was an unexpected secondary benefit for his members and the union taking the beef with Mr. de Blasio to a national audience via the Times. “We heard from EMS workers and organizations across the country from Boston to California who all expressed their strong support for us,” he said. “So we are currently working with many public and private EMS organizations to unify and have a national voice, just like you see with the International Association of Firefighters and National Nurses United.”

He continued, “We are calling it the EMS Labor Alliance to increase the awareness of the need to elevate the status of our profession, not just for us but for all of our patients as well.”

The first union to carry an anti-de Blasio message to other parts of the country where the Mayor was making appearances was the Police Benevolent Association, which is awaiting a contract-arbitration proceeding. It is seeking what President Patrick J. Lynch calls a “market-rate” pay hike for his members well in excess of a wage pattern of 2-percent annual raises set under contracts reached last summer with the two-largest municipal-employee unions, DC 37 and the United Federation of Teachers.

The union declined March 8 to respond to questions about how much it had spent thus far to send delegations to counter Mr. de Blasio at his out-of-town events and what it had budgeted for the future.