The danger of R. Kelly's tears 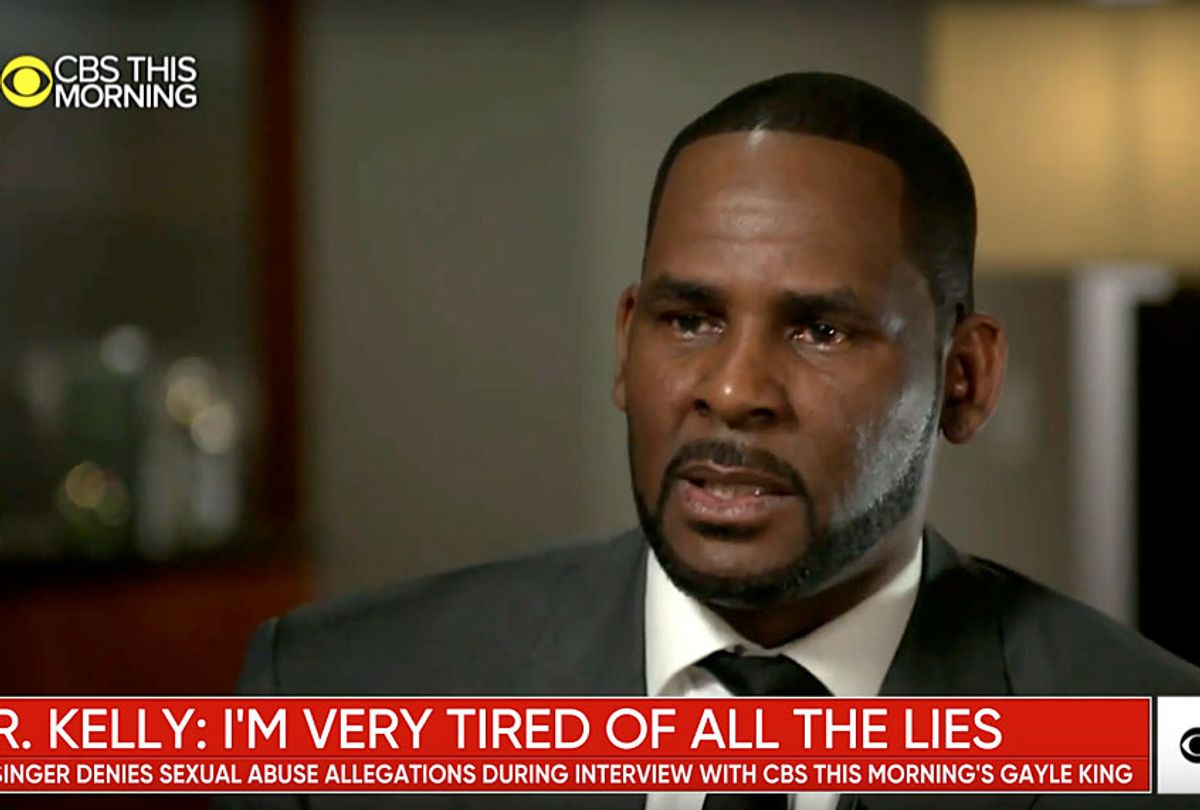 America has a long history of oppressing women, people of color and the LGBTQ community. Imagine representing all three. For hundreds of years, all of these groups fought, marched, protested, risked their lives and sometimes died to secure their rights, freedoms and the ability to simply be heard. It's still tough; however, something special is happening in this country, and finally we are we are starting to see changes, however small.

Social media movements like #TimesUp, #MeToo and #BLM have been giving victims of oppression spaces to share their stories. We are seeing historic justice being brought against people once thought to be bulletproof like Bill Cosby, Harvey Weinstein and Matt Lauer. Talented women like director Ava DuVernay are rising in Hollywood. We're seeing African Americans be nominated and win Oscars more than any time in history, and rusty racist Confederate statues are falling down all over America.

The formulas for these changes are extremely complex and the result of countless hours of organizing. But empowering victims to tell their stories, and harnessing the collective energy they inspire, is a trait each movement shares. The personal story can simplify a complex systemic problem a movement is trying to rectify. The meanest oppressors, racism-deniers and rape apologists buckle at the knees when they can connect with a victim’s personal story that touches their heart and allows them to see humanity in a person who may not share the same social context. The power of sharing hardships has been the most valuable currency to deposit in the bank of change.

But if you know America, you know all banks eventually get robbed.

Take this case in Baltimore. Valeria Smith is an aspiring rapper. You may not have heard of her yet — she only has around 1,700 followers on Instagram where she posts as @shalavou. This young woman’s world was flipped upside down one night last December. While riding through the city after a birthday celebration with her dad Keith Smith and stepmother Jacquelyn, she and her father say a panhandler approached their car window begging for money to feed her baby. According to her father,  Jacquelyn rolled down her window to give some money, and the panhandler stabbed her in the neck and snatched her purse. Jacquelyn died from her wounds.

Keith and Valeria went on a local media tour­ explaining the ills of Baltimore city, demanding justice for Jacqueline and answers for her killing. Keith went as far as advocating to get a bill passed that would ban panhandling, as a way to honor her death. The story of Jacquelyn's murder caught national attention. Oprah even tweeted to her 42 million followers, “This story struck my heart. I’ve done this a 1k times. But will think twice before ever doing again. To J.S. family I hope her death gets people “woke” to change!”

Three months later, however, Baltimore police say that Keith and Valeria lied about how Jacqueline was killed, and arrested the father and daughter duo in Texas just miles from the Mexican border, charging them with Jacqueline Smith's murder.

A story about how a woman's kind heart got her killed flipped in an instant, although the underlying theme — manipulating goodwill with evil intent — seem as if it still applies.

Keith and Valeria Smith could have won Oscars for their performances as a family of victims who survived the random murder of their loved one. In this clip, Valeria breaks down in grief in front of TV news cameras as she pleads for information about and mourns the unfairness of her stepmother's brutal killing:

There's no word yet on motive, but what makes this story stand out is how willing the duo were to step into the public roles of violent crime victim survivors. They didn't keep their heads low and ask for privacy in this difficult time of grief. They stepped in front of cameras and reaped all the attention that came after.

But we also have people playing up their alleged victim status who don’t want for fame or money, and that’s when things really get strange.

The alleged racist and homophobic attack on "Empire" star Jussie Smollett sent his fans, and the new fans he gained after his report of the attack, in rage. Smollett claimed to have been walking down a Chicago street  late at night when two white men attacked him, throwing a noose around his neck and dousing him with bleach. Smollett portrayed himself in follow-up appearances as a tearful victim of a hate crime who bravely fought back, and people cheered him on.

During the investigation, an apparently overwhelming amount of evidence surfaced — including text messages from alleged co-conspirators with "Empire" affiliations, false time stamps, injuries that didn't match Smollett's statement, and video camera footage — which lead the Chicago police department to believe that Smollett orchestrated his own attack, though a definitive motive remains elusive. And though he has been charged and is awaiting his trial, Smollett denies his involvement. If this was a theatrical performance, not a real crime investigation, we would say Smollett has not broken character once.

Then this week, R. Kelly sat down for an interview with CBS anchor Gayle King, breaking his silence since the Lifetime docuseries "Surviving R. Kelly" detailed decades of rape and abuse allegations against the once-popular R&B star. Last month Kelly, 52, was charged with 10 counts of aggravated sexual abuse against four women, three of them underage girls, from 1998 to 2010.

When asked by King about the allegations of abuse his ex-wife Andrea levied in "Surviving R. Kelly," the singer became outraged. He cried. He wailed about the unfairness of the accusations and how they have affected his relationship with his children. "What kind of woman would tear down a dad who's trying to have a relationship with his kids?" he pleads, seemingly in anguish.

Kelly has been described as a "master manipulator." Kitti Jones told Inside Edition that “he could make you feel like you're wearing red and you're wearing blue.” Here he appears to be angling for sympathy from viewers, casting himself as the victim of his ex-wife, rather than the alleged perpetrator of decades of abuse against women and girls. Soon after the interview he was arrested again and at press time remains in custody for failure to pay court-ordered child support.

In Kelly's case, there's enough evidence out there, especially after the docuseries release, to cast doubt at the authenticity of his performance. And yet it will work on some, at least for a while. It always does.

The same storytelling strategies that have helped bring about positive change are now being used to manipulate the public for sympathy. When true expressions of grief, anger and fear that survivors display are co-opted in bad faith by people who want the empathy and uplifting attention that survivors now — in some cases, finally — receive, it makes it that much harder to use individual stories as rallying points for activist causes.