Fear and loathing at CPAC 2019, or why I yelled at a fascist and regretted it

I listened to a fascist complain about deplatforming. I got drunk with a conspiracy theorist. I felt disfigured 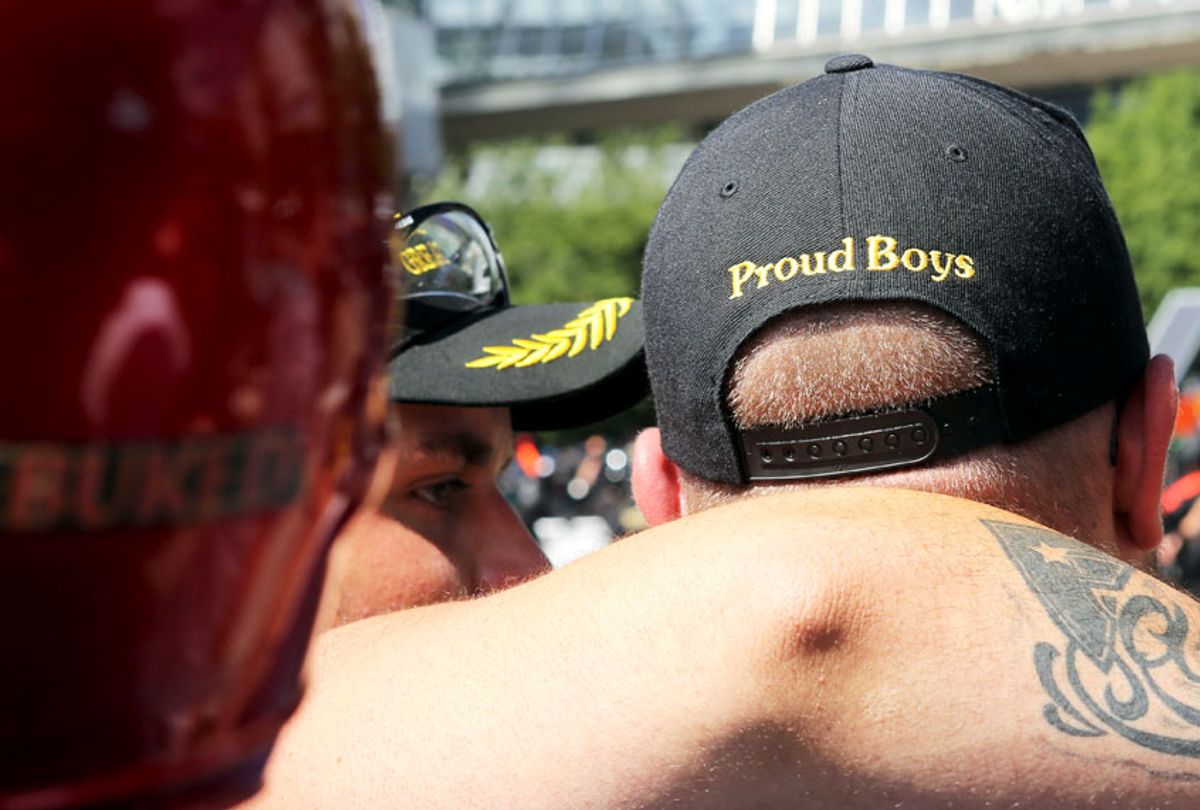 It was on a Friday evening at the recent Conservative Political Action Conference —during a taping of a podcast in a nondescript hotel room at the National Harbor — when I found myself acting in the manner I’d promised to avoid at all costs: Once again I was shouting. Loudly. And without the slightest hesitation.

I was sitting off to the side of Enrique Tarrio, the young Cuban-American chairman of the Proud Boys, a far-right men's organization which the Southern Poverty Law Center has designated as a “general hate group” for its persistent “misogynistic, anti-Muslim rhetoric” — and for using violence to intimidate, attack, and silence their political rivals at the notorious Unite the Right event in Charlottesville, as well as at subsequent rallies in New York and Portland, Oregon.

For nearly a half-hour I’d been listening to Tarrio complain about "deplatforming."

“It started out with social media,” he lamented, “so we’re not allowed to be on Facebook, Instagram, Twitter … like, the big three.” He explained that he and his fellow Proud Boys had been unjustly silenced because “it’s an issue to be, like, masculine”; because at those rallies he was just fighting back; because he’s being punished for defending speakers like “Ann Coulter, Roger Stone, Gavin McInnes" [founder of the Proud Boys]; because “hate groups don’t exist anymore, the Klan, they only sit in a field and drink beer”; and because the SPLC had nothing better to do with its “$450 million war chest” but target someone like himself.

Tarrio claimed that he’d been blacklisted by credit card processors and that Chase had banned him: “I figure, like, I could go to Bank of America, they’d let me open an account, but three months later … they’re probably gonna be like, you know what, we don’t want to do business with you anymore.”

He kept depicting his personal affairs as so abject that he’d been driven nearly to the point of starvation. “I can’t really buy groceries,” he said. The first time he used this talking point I laughed, the dry clap of my voice coming from the corner of the room. But when he repeated it again at the 24-minute mark I couldn’t help myself; this was when I cut in. “You’re not a victim!” I shouted. “You’re not a victim.”

To which Tarrio, looking off into the distance with a gesture of performative contemplation that would have made Mussolini proud, replied, “No. I’m always gonna find ways around that.”

Which was why I’d come to CPAC set on avoiding shouting (never the best look) in the first place: From experience I’d already learned that the issue wasn’t so much one of volume as comprehension. Two years earlier, watching Donald Trump swivel and sweat from perhaps 60 feet away, I’d yelled during a break in his speech: “War is Peace!” In the next moment I was sure I’d be thrown out of the ballroom. But nobody around me seemed to recognize the George Orwell quote; they all assumed that I was, in fact, complementing the president by offering my own version of the Reagan-era slogan Peace through strength.

Tarrio finished his interview with a few final comments on victimhood —“ Paypal hasn’t deplatformed me yet” — and disappeared back out into the vast, halogen-bright reef of lobbies and anterooms and hotel bars that make up the National Harbor.

You might be thinking: So what was I — someone whose political leanings fall squarely on the Bobby Kennedy/Oscar Zeta Acosta spectrum of the American left — doing on that podcast in the first place, part of a lineup that featured none other than the chairman of a violent hate group?

I’d been invited by an old political reporter, a CPAC regular who’d covered his share of presidential campaigns, after he’d taken offense to the premise of my recent book, "Freak Kingdom," which was about the iconoclastic journalist Hunter S. Thompson’s struggle against American injustice. During our conversation, which had taken place before Tarrio’s, I’d been given the opportunity to say pretty much the exact opposite of everything the Proud Boys stand for.

I talked about the Hell’s Angels, a fascistic biker gang that Thompson followed for his first book; about the police riot at the 1968 Democratic National Convention; about the murders of Bobby Kennedy and Martin Luther King Jr. “I think violence deranges America,” I said. “I think violence makes us not human. I don’t know if we’re ready for American democracy to be countered again by violence. I don’t know if it’s coming or not. But that’s what 1968 instructs me toward: Violence was used to silence dissent. And that’s terrifying.”

I asked why our culture only seems to notice the people who make the most horrific noise. I ended by saying, “The left and right need to listen more. I think that’s not a ridiculous statement.”

It was a dubious situation to be in, yes: To what degree does listening to and/or shouting at a group like the Proud Boys make us complicit?

On one level, I deeply believe that to properly counter such a hateful force in our society, I at least needed to see their attempts at justification up close — the better to nullify the violence they’ll no doubt unleash again. Because once the blows start coming with the frequency of 1968, the only thing I know for sure is that it will disfigure all of us. We won’t be the same afterward. Which is why I feel it’s necessary to document extremist reasoning before the conflagration spreads.

But after listening to Tarrio, I found myself watching videos from the Proud Boys' assault on protesters in New York. “Faggot!” one of the group members yells as he repeatedly kicks someone on the ground. Another, leaving the scene, says ecstatically, “Dude, I had one of their fucking heads, and I was just fucking smashing it in the pavement.”

And suddenly I couldn’t help but recall a quote I’ve always held dear, from "Absurdistan" by Gary Shteyngart: “These miscreants were our country’s rulers. To survive in their world, one has to wear many hats — perpetrator, victim, silent bystander. I could do a little of each.”

What if complicity is best understood not as the ability to wear these hats on your own head, but instead as the agency to switch them, from one enemy to the next, as you see fit? Speaking personally: By better defining the ideology of a hate group, am I simply providing them another burst of desperately needed oxygen, without which the cut-and-dried nature of legal and police retaliation might stand a better chance of wiping them out altogether? At what point does our desire for survival inherently indict the means we’ve been willing to take, all along, to secure it?

Later that Friday night — now I was at some sort of mildly futuristic hotel bar, drinking heavily and trying not to dwell on the panic that this recent experience had so abruptly elicited in me — I found myself in an extended conversation with another notorious attendee of this conference, a very young man in a surprisingly loose-fitting suit. I’ll avoid identifying him directly here — he’s only 21, and enough gas has been thrown on this fire already — though I will say that he’d made a name for himself of late by peddling one impossible conspiracy theory after another, including a failed attack to smear the special counsel investigating the president.

He’d also been recently “deplatformed.” The day before he had accused a prominent member of the House of Representatives of being secretly married to her brother. He was a Trump supporter and said so, during our conversation, which suddenly grew intense, but not in a vitriolic so much as a sophistically agile sort of way — as if we were each trying to make the other say something nice about a genre of music one might tolerate but never love — when at last I basically said to him: “Just admit it. Donald Trump is a crook. Eventually Congress is going to impeach and convict him and drive him from office because what the fuck does a senator really care about some sweaty septuagenarian reality TV star who’s never once tried his hand at the game they’ve been playing for decades? And then what will you do — I mean this seriously — when he’s in a New York state penitentiary, barking like a circus bear for his base to rise up and free him? Will you be there too? Will you go up against the government and commit violence and treason and risk death for him? And where, in the end, do you think that will get you — or will get any of us?”

He just smiled. He didn’t take the bait. He was too smart for that. I knew from the start of our conversation that what he seemed to want most was to play the role of extremist, which was not an unheard-of position at CPAC. (The year before, a friend of mine pointed out a Richard Spencer-looking guy off to the side and then said to me in a low voice: “Oh, he’s not really a white nationalist. He just pretends to be one so he can get on Fox News.”)

As we continued to talk about Trump, I thought about what I’d been like 15 years ago, back when I was the same age as this very young man sitting across from me now: a version of myself that, in nearly everything that mattered, from politics to art to fashion to manners to the vocabulary on which my ability to communicate relied, I was at best naïve … and in most cases embarrassingly wrong. But at least I’d avoided the possibility of somehow trapping my future self — whatever the fuck I’ve become, today — in the actions of that long-ago college-me.

Would the same someday be said for this very young man? I thought then of Tom Buchanan, the literary villain, football star and white supremacist from "The Great Gatsby," “a national figure in a way,” as F. Scott Fitzgerald characterized him, “one of those men who reach such an acute limited excellence at twenty-one that everything afterwards savors of anti-climax.”

Unlike Enrique Tarrio and the Proud Boys, this particular young man wasn’t looking to participate in violence. Instead, he was playing at the role of a conspiracist in the way Donald Trump plays at being president. Still, as with our current conspiracist in chief, there is violence in his ideas, in the illogic of his tactics and execution. Each time we’re forced to confront and refute their unreality, we hasten the disfiguration that future violence seems more and more likely to bring about. Politics are supposed to be our way of avoiding violence — replacing physical fights with arguments as a means to gain and transfer power. But what happens when CPAC is the place where the politics of the day have led us?

By the end of the night I knew one thing: It was time to leave. Already I’d stayed too long at the National Harbor, this terrible spaceport-boneyard of plastic trees and dirty sheet-glass ceilings. I didn’t stay for Donald Trump’s two-hour performance the next day, missing the chance to see him attempt, among other things, carnal relations with the American flag.

Instead I felt, in a word, disfigured. But then — considering the themes we’ve been pursuing here from the start, from victimhood to complicity — disfigurement is not something the rest of us should expect to escape anytime soon.