Kraft was arrested 19 days after the picture was taken. It's unclear if Trump knew Li Yang or the other woman in it 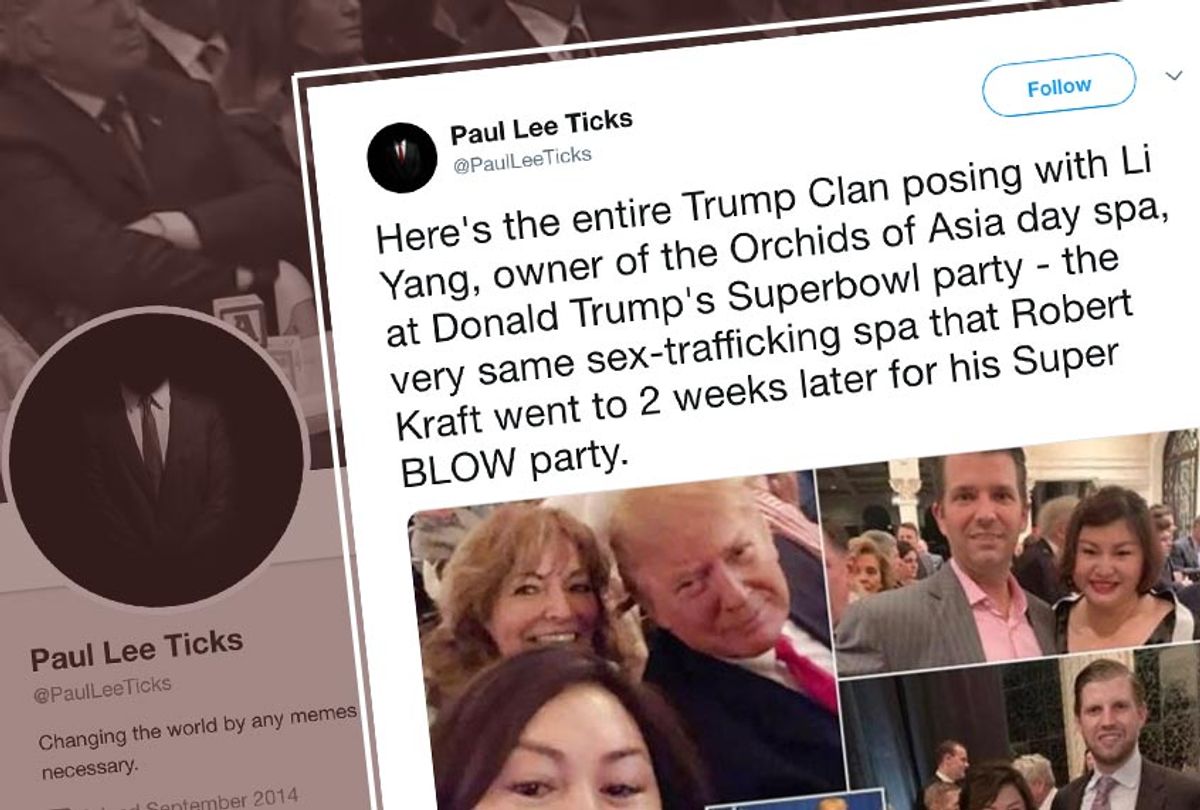 President Donald Trump posed for a selfie-style photograph with the founder of a chain of Florida spas, including the one where his longtime friend and New England Patriots owner Robert Kraft was busted for soliciting prostitution.

The Feb. 3 photo, which was obtained by the Miami Herald, appears to have been taken sometime during the president's annual Super Bowl Watch Party at his West Palm Beach country club in the Sunshine State. The Patriots, for whom Trump famously roots, defeated the Los Angeles Rams in the annual championship game. Trump can be seen smiling in the photograph with two women at a table behind him. One of the women photographed with him is 45-year-old Li Yang, who more than a decade earlier founded the spa where Kraft was charged with soliciting prostitution.

It is unclear if Trump knows Yang or the other woman in the photo, but the selfie-style picture is similar to the type of photograph Trump is often asked to take with his fans.

Kraft was arrested just 19 days after the picture was taken. He was allegedly caught on camera by authorities paying for oral sex at the Orchids of Asia Day Spa on Jan. 20 and has since pleaded not guilty to the charges.

Yang reportedly sold the spa in 2013, and she was not charged in the anti-human trafficking operation that shut down 10 Asian day spas in South Florida – none of which are registered to her or her family.

In what was described as a brief interview, Yang told the Miami Herald that she and her family have never broken the law but refused to comment on whether she knew of the accusations that therapists in her spas were propositioning sex. She also told the newspaper that she was out of the spa business. However, her family still owns a number of establishments, operating under the name of Tokyo Day Spas, that are reportedly known for offering sexual services — behavior which is allegedly encouraged by the management.

The Herald reported that two Florida policies agencies have probed allegations of prostitution at the Tokyo Day Spas, and that they have been discussed online as establishments were men can pay for sexual services.

"If you're just wanting to get a 'rub and tug,' this might be one of the best places in West Palm Beach," one Internet commenter reportedly wrote about Tokyo Day Spas.

Trump said he was "surprised" to learn about the charges against his longtime friend and called the situation "very sad."

Yang, according to the Herald, became politically active after the 2016 general election. Before then, the spa entrepreneur reportedly showed no evidence of political engagement, having not voted in the 10 years prior to Trump's presidential bid. Since then, Yang has attended several Republican political events, including being invited to the White House in February 2018 for an event hosted by the Asian American and Pacific Islander Initiative – an advisory commission Trump launched by executive order the year before.

Yang's Facebook page also includes a signed photograph of her standing next to the president, as well as additional photos with Florida Gov. Ron DeSantis, Sen. Rick Scott, Sarah Palin and the president's adult sons: Donald Jr. and Eric.

In addition to attending Republican fundraisers and mingling with GOP operatives at galas, often clutching a rhinestone covered "MAGA" purse, the Herald revealed that Yang and her close relatives have donated more than $42,000 to Trump victory, a political action committee, and more than $16,000 to the Trump campaign.