What did the president know and when did he know it? Trump knew it all, from the beginning

Donald Trump's defenders have long argued he wasn't aware of the massive corruption. That excuse has blown away 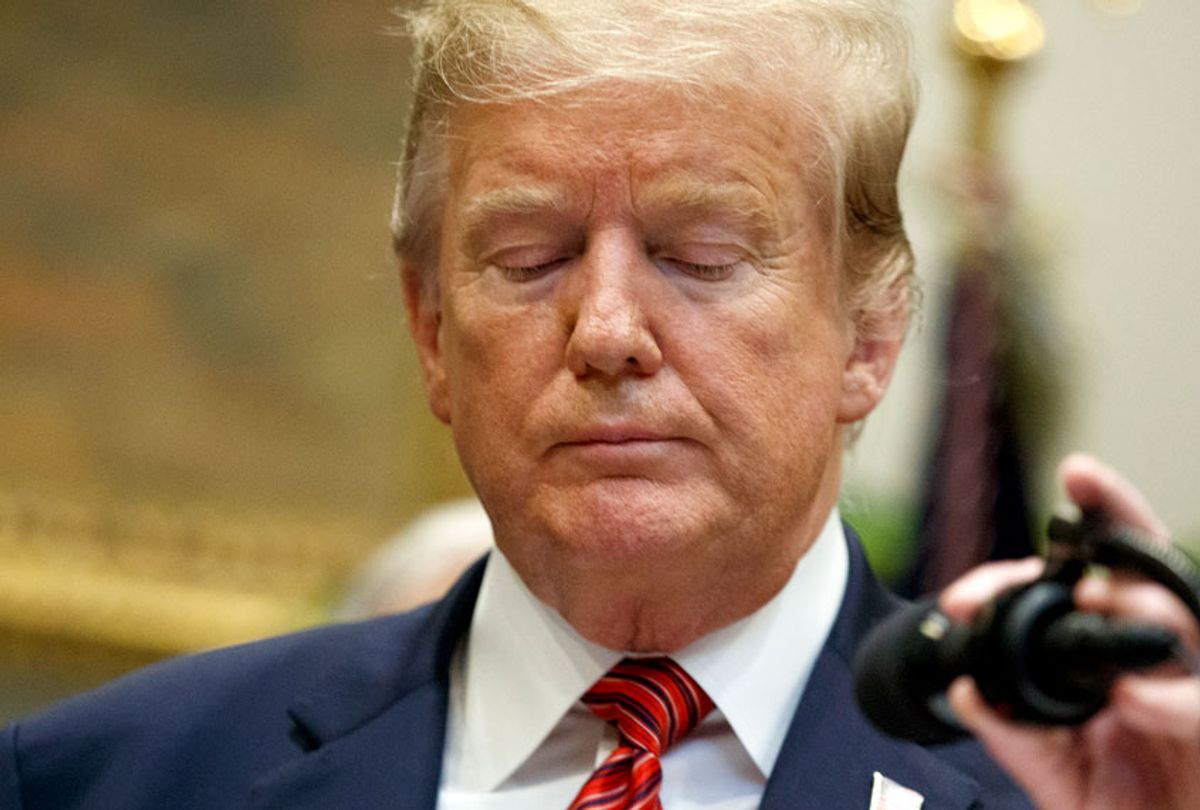 Every week seems to bring another Trump scandal. There are so many now we're going to have to start numbering them.  Up until now the sheer volume of alleged misdeeds and malfeasance has actually worked in the president's favor. There is so much out there that it's hard to keep the whole picture straight in your mind and that has the weird effect of making things seem less serious than they actually are.

We know that the Trump base and the vast majority of Republican voters still support the president and think it's all nothing but a witch hunt. They are mesmerized by the president and propagandized by Fox News and other right-wing media. But I would imagine that even people who don't like Trump but don't follow all this closely or in much detail wonder whether maybe the whole thing is just a collection of complaints that don't really add up to anything.

That's why it's meaningful when the likes of Jim VandeHei and Mike Allen of Axios, journalists whom the political establishment sees as avatars of acceptable mainstream thinking, decide that it's time to take stock of how many scandals are now being investigated and how wide the scope of the alleged criminality and corruption has become. It's rather sobering. On Thursday they wrote out a partial list, entitling it, "The biggest political scandal in American history."

VandeHei and Allen report that historians tell them there are only two previous scandals that even come close to what we are dealing with now: One is Watergate, and even Americans who weren't alive at the time have heard plenty about that one. The other would be Teapot Dome, a bribery scandal under the manifestly corrupt Warren G. Harding administration in the 1920s.

Trump's scandals include the Russia investigation, of course, which the Axios authors call one of the greatest counter-espionage cases of all time; the Stormy Daniels campaign finance scandal; the lies about the Trump Tower Moscow project (which is likely also part of the Russia counterintelligence investigation); the more than 100 contacts between Russian agents or emissaries and members of the Trump campaign; Michael Flynn's inexplicable lies to the FBI about his conversations with the Russian ambassador; the firing of James Comey and other acts of obstruction of justice; and the granting of security clearances to Trump's daughter and son-in-law over the objections of the intelligence agencies.

Their list does not include all the administration officials under suspicion of corruption while in office or the scandals swirling around the president's family business, which he refused to give up upon taking office and is still closely involved with, even promoting his resort properties and private clubs with personal appearances nearly every weekend. Top executives and foreign representatives seeking favor from the administration ostentatiously spend money at Trump hotels to gain the attention of the president and his family. In the wake of a recent unfavorable court ruling over his golf course in Scotland, Trump even posted a promotional tweet openly promising foreign policy considerations:

The U.S. attorney for the Southern District of New York is investigating Trump's inaugural committee and various financial issues regarding the Trump Organization. New York's attorney general and insurance regulators are looking into various charges of fraud. And the House of Representatives has launched at least half a dozen different probes into various of the matters mentioned above.

Even the purveyors of Beltway conventional wisdom are starting to see that regardless of what Robert Mueller's eventual report may conclude, what we already know makes this the most scandal-plagued presidency in history. And the big question that hangs over all of it is the proverbial one uttered years ago by Sen. Howard Baker, who was the ranking Republican on the Senate Watergate Committee: "What did the president know and when did he know it?"

It's tempting to believe that Donald Trump is just too dim to have known what he was doing. That theory goes like this: He had no experience in government and just didn't realize that his ruthless tactics, which were customary in the business world, would be seen as corrupt and possibly criminal. He was busy running for president and then being president.

That is almost certainly wrong. First of all, Trump's business history is full of examples of corrupt practices, from his days as a casino magnate to redlining of rental housing, fraudulent development projects and partnering with the mob. Not long ago, we saw a massive exposé of the fraudulent scheme Trump's father set up, from which his family massively profited for decades. It's not as if he's ever operated with integrity.

Let's take one example from the recent revelations by Michael Cohen, Trump's former lawyer. Cohen produced checks signed by Trump, after he became president, that Cohen says were to pay him back for the hush money Cohen had paid to Stormy Daniels. It has been suggested that perhaps Trump didn't know what those checks were for. After all, he's a wealthy man who signs $35,000 checks all the time and he might have assumed they were for general legal work.  But Donald Trump doesn't operate that way. He told the New York Times during the transition:

[I]n theory, I can be president of the United States and run my business 100 percent, sign checks on my business, which I am phasing out of very rapidly, you know, I sign checks, I’m the old-fashioned type. I like to sign checks so I know what is going on as opposed to pressing a computer button, boom, and thousands of checks are automatically sent. It keeps, it tells me what’s going on a little bit and it tells contractors that I’m watching.

Is it reasonable to believe that he signed those checks in the Oval Office without knowing what they were for?

Bloomberg recently reported that Trump was heavily involved in the inauguration festivities. His inaugural committee chair, Tom Barrack, said Trump wanted to know everything about the finances. There remain big questions about what happened to the massive sums of money collected for that lame inaugural celebration. We know that in at least one case foreign donors to the inaugural committee were told to send their money directly to other people donors in order to hide the origins of the money. Is it remotely conceivable that Trump wouldn't have known about such arrangements, or that he had no idea where any of that money was going?

Big questions remain about whether the then-candidate knew in advance about the June 2016 Trump Tower meeting with Russian emissaries who had promised dirt on Hillary Clinton. After all, he had a big deal brewing in Moscow at the time. Are we really expected to believe that Donald Trump Jr., who was heavily involved with that deal, didn't mention the meeting to dear old Dad? Not bloody likely. Hundreds of millions of dollars were at stake.

Donald Trump is a narcissistic control freak, particularly when it comes to his cashflow. When it comes down to it, most of these scandals are about money -- including his Russia entanglements, now that we know about the Moscow project. So to answer Howard Baker's question: It's pretty clear that the president knew everything, and knew it all from the very beginning.