Paul Manafort gets a slap on the wrist: American injustice in action 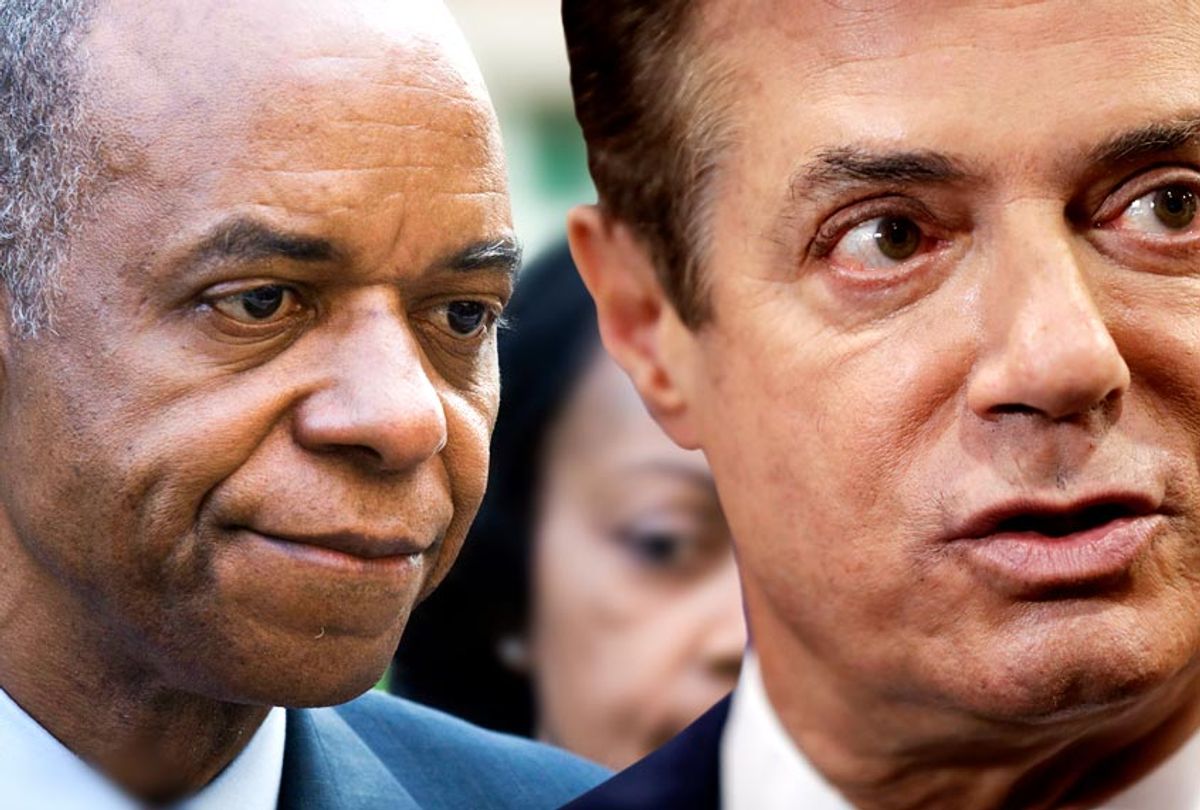 Paul Manafort’s unexpectedly light sentence -- even if he serves his full term, which isn't likely, he'll be out of federal prison by the summer of 2022 -- has sparked widespread outrage from legal observers and Trump detractors. But law-and-order Republicans and watchdog conservatives have remained conspicuously quiet about this display of leniency for a convicted felon who defrauded the U.S. government of tens of millions of dollars.

Trump’s former campaign chairman, a longtime Republican strategist who once worked for Ronald Reagan, was sentenced by U.S. District Court Judge T.S. Ellis III, a Reagan appointee, to 47 months in jail on Thursday. Manafort was found guilty by a jury of eight felony tax and bank fraud charges for failing to pay taxes on millions of dollars laundered from offshore accounts and for failing to report those foreign accounts to the IRS. He was earlier found to have systematically lied to special counsel Robert Mueller’s prosecutors and was sent to jail in June for alleged witness tampering. As part of his conviction, Manafort was ordered to pay $6 to $24 million in restitution to the government and an additional $50,000 fine.

Considering the gravity of his crimes, this is barely a slap on the wrist. Prosecutors said Manafort had hidden $55 million in offshore accounts and falsified documents to secure $25 million in loans from three different banks. After accounting for the nine months he has already spent in jail, Manafort could serve 38 months (or less) in federal prison. The recommended sentence for his crimes could have been 25 years.

Despite Manafort’s extensive felonies and post-conviction obstruction, however, Judge Ellis told a packed courtroom on Thursday that the sentence -- which came after one holdout juror saved Manafort from being convicted on every count -- was “just.” The judge pointed to prior sentences given to criminals similarly found guilty of tax evasion. (The median sentence in 2017 for fraud cases in the district where Manafort was sentenced was 36 months, according to the U.S. Sentencing Commission.)

“He’s lived an otherwise blameless life,” Ellis argued, adding that anyone who doesn’t think the sentence is tough should “go and spend a day [or] a week in jail … He has to spend 47 months.”

Leaving aside the hilarious allegation that Manafort's life, aside from his extensive criminality, has been "blameless," the longtime political hired gun offered no apology for his misdeeds. Instead, he complained that he felt “humiliated and ashamed.” Sitting in a wheelchair and wearing a green jumpsuit in court on Thursday, the 69-year-old Manafort begged the 78-year-old Ellis for “compassion.”

It was a plea that apparently worked, and was echoed by the president’s defenders on Friday.

On “Fox & Friends,” known to be must-see TV for President Trump, co-host Brian Kilmeade said it would be “tough” for Manafort to serve the next four years in prison. (It will actually barely be three, but let's move on.) Trump said on Friday that he felt “very badly” for his old friend but celebrated Manafort’s sentencing as a vindication that the campaign did not collude with the Russian government. That was a strange thing to say and perhaps suggestive of obsession: Manafort's case did not involve Russian collusion and resolved no such question.

Rudy Giuliani, the president's personal attorney, made remarks in on Friday that make even clearer how this lenient sentence displays the banality of American injustice.

Giuliani feels "terrible about the way Manafort has been treated," he said, adding that it's "not American to keep a man in solitary confinement to try to crack him." (Mueller’s prosecutors said in a court filing last July that Manafort was in a private unit with a telephone, a laptop and "his own bathroom and shower facility." He was "not confined to a cell.")

"He's not a terrorist," Giuliani said of Manafort, who in his career has served numerous tyrants, as well as candidates who won supposedly democratic elections under dubious circumstances. "He's not an organized criminal. He's a white-collar criminal!"

Manafort’s sentence stands as a scathing, if implicit, indictment of the justice system's tendency to target, treat and ultimately punish defenders differently based on the class and color of the victims and perpetrators. White-collar crime is the most blatant symbol of how the American legal system has been set up to benefit the wealthy and the powerful (not to mention the white) since its inception.

Judge Ellis made clear from the outset of the trial that he disliked the government’s case and felt that prosecutors were improperly using their power to squeeze Trump’s inner circle as a means of getting to the president. During the trial, Reuters reported, the judge berated federal prosecutors "for allowing a witness to watch the proceedings, despite having given his earlier approval." Ellis, who regularly hears high-profile cases because numerous government agencies are located in Virginia, ordered prosecutors during the trial to cut a week off their planned presentation.

“Do you have any idea how many bank frauds and income tax false statements [trials] I’ve heard?” he asked. “None of them last three weeks. None.”

Manafort’s crime, which was to bilk the government -- and by extension the American taxpayers -- of millions of dollars, appears to have been dismissed by Judge Ellis as uninteresting, even routine. But when Ellis sentenced former Rep. William Jefferson, an African-American Democrat from Louisiana, to 13 years in prison back in 2009, the judge said he wanted the sentence to serve as a “beacon” for other politicians contemplating the temptations of corruption. There's no doubt Jefferson was guilty, but the scale was rather different: He had $90,000 in cash stuffed in his freezer.

To be fair, Ellis subsequently vacated some of the charges against Jefferson after the Supreme Court threw out federal corruption charges against former Virginia Gov. Bob McDonnell. Ellis has even taken a turn toward criminal justice reform — of sorts.

First appointed by Reagan in 1987, Ellis has recently complained to Congress that cases involving multiple charges can result in decades of extra incarceration for a defendant who chooses to go to trial rather than plead guilty. (Federal sentencing guidelines are deliberately draconian in order to induce pleas and discourage trials.) Ellis called this "stacking" practice "grossly excessive and unjust."

Last August, while he was overseeing the Manafort trial, Ellis sentenced a black woman to six years in prison over a fake Publishers Clearing House scam. Last summer, he sent a black male defendant to prison for 40 years for dealing  methamphetamine last summer. Is it being "soft on crime" to perceive a dangerous and damaging disparity at work here?

“I chafe a bit at that, but I follow the law,” Ellis said when he handed down the meth sentence, per Politico’s Josh Gerstein. “If I thought it was blatantly immoral, I’d have to resign. It’s wrong, but not immoral.”

In 2002, when he presided over the case of “American Taliban”  defendant John Walker Lindh, Ellis rejected prosecutors’ plea deal. He instead sentenced a 21-year-old man, arguably a misguided idealist, to the maximum 20 years in prison.

“Life is making choices and living with the consequences,” Ellis told Lindh in open court. “You made a bad choice to join the Taliban.”

Ellis has countless other cases that can be parsed along similar lines. But one federal judge's career isn’t the point. The point is that the outrage over his decision in the Manafort case has been muted and highly selective.

At the annual conservative confab CPAC last week, progressive activist Van Jones ceded the ground fought for by criminal justice reformers over the years in order to praise Republicans, many of whom stymied reform efforts until the Trump administration, as the true champions of change.

“Here’s the deal. The conservative movement in this country — unfortunately from my point of view — is now the leader on this issue of reform,” Jones said. He worked with White House adviser and Trump son-in-law Jared Kushner on the bipartisan First Step Act aimed at small-scale reform.

But the dirty little secret of the reform efforts pushed by conservatives like the Koch brothers is that their advocacy is limited to nonviolent crimes largely because that will encompass all white-collar by definition. Meanwhile, Trump's Department of Justice, especially under the now-departed Jeff Sessions, slammed efforts to limit the application of mandatory minimum sentences, arguing that even low-level drug dealers should not be considered nonviolent offenders.

Manafort’s sentence serves as a glaring display of privilege and injustice. But he now faces another court that may be significantly less friendly. As it happens, U.S. District Judge Amy Berman Jackson, who is presiding over Manafort's second criminal case in Washington, represented William Jefferson at his 2009 trial before Judge Ellis. She will sentence Manafort on his two conspiracy convictions next week.