Uber and Airbnb show two divergent paths for our future 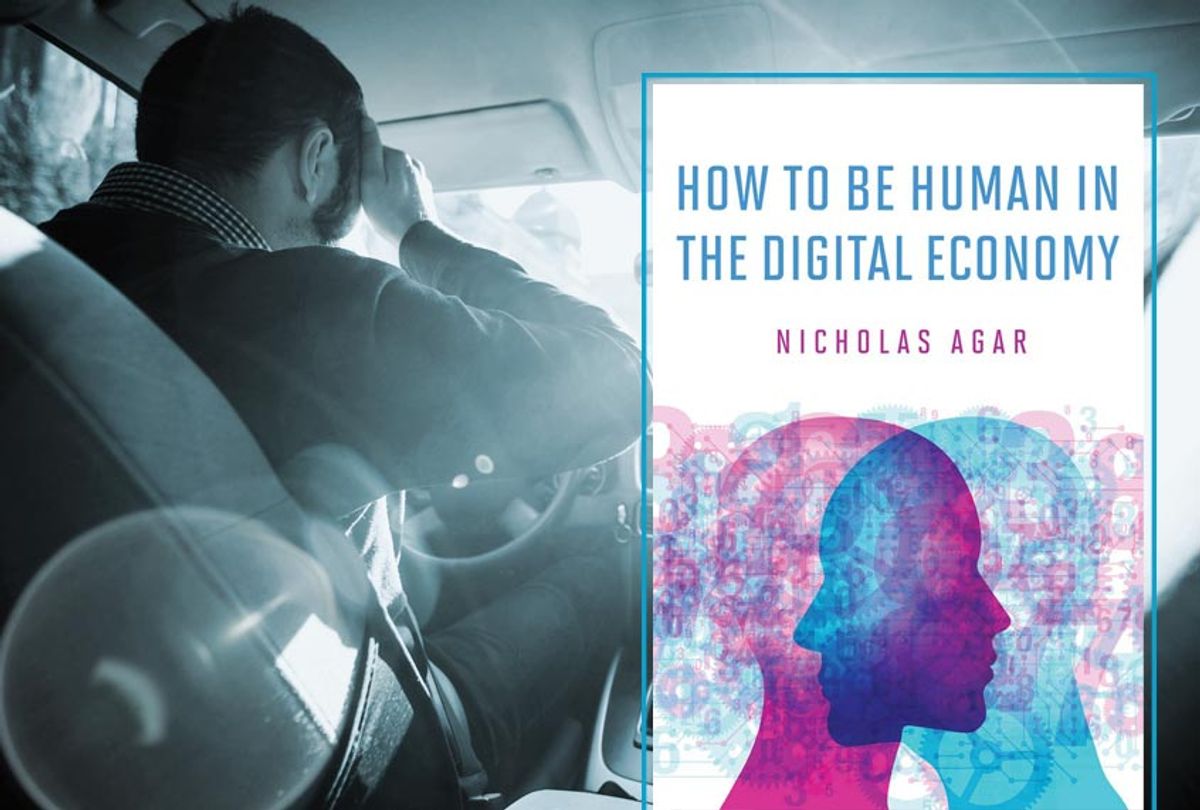 Adapted excerpt from "How to Be Human in the Digital Economy" by Nicholas Agar. Copyright 2019 MIT Press.

We know that human workers face a threat from very efficient digital technologies. I would not trust a 2019 driverless car to navigate the streets my hometown Wellington, New Zealand. But for Waymo, Uber, Tesla, and the rest, Wellington’s awkward highways and byways are work in progress. We should expect driverless cars that navigate them more safely than any human. Woe betide the many humans who make their livings driving us around.

Airbnb is a digital age disruptor with different implications for the economic value of what humans do for each other. With the 2016 launch of “Experiences” (“activities designed and led by inspiring locals"), Airbnb monetizes what you offer when you take strangers on a tour of your favorite places. For this Airbnb takes a 20 percent cut.

We must rethink the bargain we have struck with Airbnb and others that seek to monetize social services. We should work for a digital age in which we view digital tech as most of us currently view the Second Industrial Revolution wonder of electricity – as a boring enabler for the valuable things that humans do for each other.

The journalist Brad Stone presents both Airbnb and Uber as helmed by extroverts with training in design who differ from the geeky introverts who built Google and Facebook. There are similarities between Uber and Airbnb. Both are San Francisco-based platform businesses that have, to use the preferred verb of digital entrepreneurs, “disrupted” entrenched incumbents, Uber the taxi industry and Airbnb the hotel industry. Airbnb became the world’s most profitable hotel business without even having to acquire or build a hotel.

The principal value of a platform business is in its network. The successes of Uber and Airbnb come from two-sided markets that bring together people who need lifts or rooms and people prepared to accept payment for offering lifts or rooms. The interactions between passenger and driver or between host and guest happen on Uber’s or Airbnb’s platforms. They match sellers with buyers and take their cut. Both businesses understand the PR value of gestures of support for people whose experiences of these two-sided markets don’t quite match the Uber or Airbnb ideals. But the whole idea of Uber and Airbnb as facilitators of two-sided markets is that people who choose to participate in these markets accept responsibility for any misfortunes they suffer. Anger and legal action should be directed at the offending parties on the other side of the exchange and not at the platform business which aspires to know as little as possible about the specifics of each transaction.

While there are many similarities between Uber and Airbnb, they may have different attitudes toward social work in the Digital Age. Stone describes Travis Kalanick’s excited reaction to Google’s demonstration of a driverless car prototype: “The minute your car becomes real, I can take the dude out of the front seat … I call that margin expansion.” Uber’s drivers protest the fact that it retains a fifth of the money paid by passengers. We’ve seen how the “billion times anything” principle turns small payments by Facebook’s advertisers into a lot of money for Facebook. By July 2016, Uber had completed 2 billion rides. Suppose it did not have to pay the dude in the front seat.

Currently, Uber’s drivers pocket 80 percent of the money paid by passengers. Two billion times 80 percent is an impressive expansion of Uber’s margin. Airbnb’s reaction seems to be the opposite. In 2016, it enhanced its offerings by adding new “Experiences” and “Places” tabs to its website. Brad Stone describes Experiences as follows.

With Experiences, travelers would be able to buy unique excursions, like hunting for truffles in Florence and visiting literary landmarks in Havana. Local entrepreneurs and celebrities would create and conduct these tours themselves.

Airbnb Experiences would vary in price. Stone describes a US $800 Sumo experience with the retired champion Konishiki Yasokichi. It featured attendance at a training session, tournament seats, and a sumptuous meal. Airbnb Places would connect visitors with local hosts who would be able to direct them away from a narrow list of stereotyped tourist activities—think of the hordes of tourists who arrive in Rome or Paris and upon arrival can think of no alternative to joining massive lines for the Coliseum or the Louvre. Visitors connected with authentic Romans and Parisians would be able to spend their brief stay having experiences normally available only to those in the know. They might ask “Can you show me the ‘real’ Rome? I want to eat lunch where the Romans eat, not at a tourist trap within sight of the Coliseum.” If they ask “Can you take me to the galleries that display the works of Paris’s artistic avant garde?,” a good host won’t take them to the Louvre, a museum that she probably spent much of her adolescence visiting.

Brian Chesky, the company co-founder, places emphasis on the social side of Airbnb’s new offerings. He says “So can only people drive cars? I don’t know. But only people can host other people. Only people can provide care. If you want something handmade, only a person can do that.”17 Chesky certainly seems more alert to what humans can offer each other than does someone excited about getting the “dude out of the front seat.” This does seem to be a vision of hospitality in the Digital Age in which humans direct their agency away from jobs that machines may do better than them—driving cars—and into areas that demand their social talents— enjoying helping a clueless stranger to experience the truly distinctive sights, tastes, sounds, and smells of your neighborhood. Chesky doesn’t want to get rid of the dude who’s showing you around Osaka.

If we are to fault Chesky it would be his jarringly technological presentation of these pleasures. Human experiences are being repackaged and marketed as Airbnb “Experiences.” He says of this latest enhancement of Airbnb’s services “I want to do for travel what Apple did to the phone.” For the time being, if you are about to fly to Madrid, a city that you do not know, Airbnb’s website may be the best way to find someone to take you out to the city’s best places for cider from Asturias. But when you return from Madrid Chesky wants you to grant Airbnb much of the credit for the fun times you had. I hope for a future in which we make use of the services offered by Chesky but feel less beholden to him and his inheritors.

As the shock and awe of a website capable of near-instantaneously connecting people who want to drink authentic Asturian cider in Madrid with strangers who would accept a modest fee to take them to the best cider joints wears off, we will be able to reassess the value of the contributions made to this experience.

The Internet is today’s wonder technology. We know from the case of electricity that yesterday’s wonder technologies can become today’s boring enablers. Today we can barely imagine the excitement that people must have felt when electricity brought artificial illumination to their living rooms. It’s hard to think of places that you might visit that aren’t artificially lit. You might investigate whether a hotel you are considering booking has a Wi-Fi router, but you just assume that, unless you’ve chosen a place that celebrates its remoteness, you’ll be connected to the electrical grid. To say that electricity has become boring is not to say that it has been dispensable—quite the opposite. Our lives are more dependent on electricity than were the lives of people who viewed it as a wonder technology. Few digital technologies would be possible without it. We expect cheap, reliable supplies of electricity and resent threats to this supply. We shouldn’t forget the anger directed at Enron Corporation when it sought to profit by playing games with people’s electrical supplies.

The way we share out credit for a service has consequences for how we allocate its economic rewards. Today’s platform businesses claim a significant share of these rewards. Uber retains a fifth of the money paid by passengers. It can because drivers and riders understand the power of its network. Airbnb does well out of its network. As soon as a guest makes a booking on the Airbnb site a “guest service fee” is displayed. This is charged until the host has confirmed the booking. According to the Airbnb site, “Guest service fees are typically 6–12% but can be higher or lower depending on the specifics of the reservation.”20 In addition to this, hosts are charged a “host service fee” of 3 percent calculated before the application of local taxes.

I am not suggesting that we should intervene now to overturn these arrangements. Rather I am suggesting that a focus on the long view suggests a future in which people reject this way of giving credit for the services they receive. It would be hard to imagine today’s cardiac surgeons tolerating an arrangement in which between 10 and 20 percent of the value of their procedures went to the company providing what they would view as platform services even if they were grateful for the additional business brought by the cardiac surgery platform business. We can hope for a future in which those who use the Internet, or whatever technology has replaced it, to offer their services to tourists will judge Airbnb’s 6–12 percent plus 3 percent to be extortionate. We have no way to insist on these assessments today. Access to Airbnb is required to access the financial rewards and social pleasures of taking a foreigner to your favorite cafés. Currently Airbnb is indispensable. Perhaps the relationship between future social networking companies and people who enjoy Airbnb-style “Experiences” will be like those that obtain between the pleasures that we get from electricity and the companies that supply it. If a consortium of power companies were to credibly threaten to disconnect us from the grid many of us would probably consent to pay a lot more than we currently pay to avoid this eventuality.

We look to elected government to prevent this eventuality. There is hope for socialized control and access to increasingly essential digital services. We can expect people of the Digital Age to use the Internet or its successor to find strangers willing to show them around for a modest fee. But we should accept that almost all the value of these lies in the people who provide them. Today’s poets need to pay their power bills if they are to keep writing into the evening. But they tend to dedicate the poetry collections to their loved ones rather than to the company that provided their power. A readjustment of attitude could make Internet services tomorrow’s boring enabler. You pay for the services of a boring enabler, but not too much.