Author of "Trump on the Couch": Trump should be "quarantined"; Cohen should fear for his life 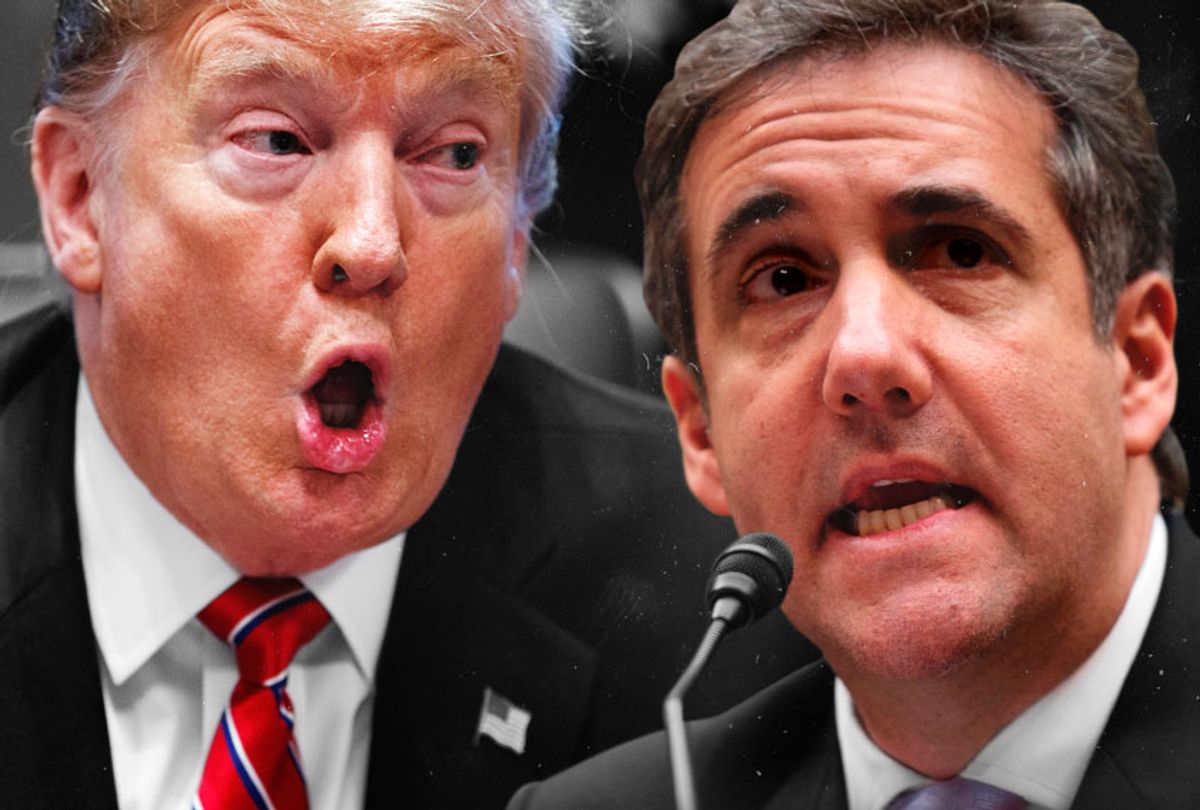 Last weekend, Donald Trump delivered a big speech at the annual CPAC political carnival. It was the longest and perhaps the most memorable of his entire political career. It was also a delusional, nightmarish monologue, full of lies and violent images, manifestly the work of someone who lives in his own reality.

Trump's audience at CPAC, and around the country, was enthralled. This is one of the most prominent attributes of a political cult: Its members worship their leader and are bound together with him in a state of collective pathology and mass psychosis. The cult leader also promises safety and salvation. Donald Trump did this as well last Saturday when, near the conclusion of his speech, he said, "I’ll protect you."

Several days before Trump's CPAC speech, Donald Trump's personal fixer and former attorney of many years, Michael Cohen, testified before the House Oversight Committee. During his testimony, Cohen explained that Donald Trump acts like a Mafia boss, using threats, violence and intimidation to get his way and control his underlings. Cohen also provided evidence of Trump's likely criminal behavior in the form of a personal check used by Donald Trump to pay hush money to adult film star Stormy Daniels. In total, Cohen offered a personal account of Donald Trump as a man who is an impulsive pathological liar, a con artist and a threat to American democracy and public safety.

Should Cohen's testimony be believed? Is Donald Trump a sociopath? How is he "gaslighting" America? What will Trump do if he is forced to leave the presidency? Why does he so overtly admire dictators and authoritarians like Kim Jong-un and Vladimir Putin? Should Michael Cohen fear for his safety?

In an effort to answer these questions I recently spoke with Dr. Justin Frank, a former clinical professor of psychiatry at the George Washington University Medical Center and a physician with more than 40 years of experience in psychoanalysis. He is the author of the bestselling books "Bush on the Couch" and "Obama on the Couch." His most recent book is "Trump on the Couch: Inside the Mind of the President."

Was Michael Cohen's public testimony before Congress believable to you? Was Cohen describing the Donald Trump you have studied and written about?

Yes, Cohen described the Donald Trump that I profile in my book. Cohen also defended Trump in a way -- he didn't say that Trump directly ordered him to become a thug. One of the exchanges during the hearing was very revealing. When the congressperson asked Cohen how Trump gets people to do things, it was explained that Trump makes statements that are understood to be correct and that must be agreed with by his underlings. That's how mob bosses do things. Cohen's description of Trump is completely believable and very accurate.

There are other things about Trump that came out in the hearing as well. Trump does not read. He doesn't know things. He shoots from the hip and says things that he doesn't remember the next day. I wrote about this in my book. Other people who have closely followed Trump's career and life have come to similar conclusions.

It is also very interesting to see people keep calling Michael Cohen a liar. Those Republicans and others do not follow that up by including the fact that Cohen was lying to protect a lying president. Cohen was lying because he was Trump's lawyer and in that role he did things that were really bad. Worse than lying was the thuggish attitude Cohen had towards people. Because Trump is a liar, he has surrounded himself with other liars.

What were you thinking when Michael Cohen told Congress that Donald Trump will not peacefully leave the presidency?

What Michael Cohen said about Donald Trump not voluntarily leaving the presidency is bone-chilling. It is also not surprising to me.

The other thing that's dangerous about Donald Trump is that he is very comfortable whipping up hate and division. There are many people in the country who worship Donald Trump. It doesn't matter what Trump's people are told about him. He has touched into a very primitive, fundamental part of people's character -- which is that people who have felt dismissed, disenfranchised, ignored by the government, promised things they have not received, people who've been deeply wounded and hurt and feel forgotten are attracted to him. Trump has a loyal following that he can take advantage of to cause trouble.

Donald Trump is a compulsive liar. Michael Cohen is a liar as well -- but he was lying in service to Donald Trump. What is the relationship and power dynamic like between liars?

First of all, a liar who's in charge will never fully trust anybody else, even if he's another liar. He will never trust people for two reasons. One is because he projects his own untrustworthiness onto other people. In other words, he at some level knows he's a liar. So he projects part of the lying part of himself onto other people and is always suspicious of them.

That's why Trump makes everybody sign nondisclosure agreements. Trump does not want anybody to tell the truth about him. Trump surrounds himself with liars because he knows they will lie to protect him. Trump also knows that he has power over them. This power is driven by their fear of Trump. The only people Donald Trump really trusts are his daughter and his older son, Don Jr. The rest of the people are afraid to say anything against Trump. This includes his wives.

It has been reported that Donald Trump and Kim Jong-un have been exchanging letters with one another, and that people who have seen these communications describe them as being almost father-and-son-like.  What does that reveal about Trump and Kim Jong-un's relationship and their psyches?

Ultimately, those letters between Trump and Kim make a lot of sense. Those letters are also communicating that, "I can tell you I love you and I know you won't attack me because I know you're also like me, a thug. I can tell you those things without feeling anxious that you're going to attack me or hurt me or make me feel bad because we have this in common. We are fellow killers."

How then does Donald Trump react to Kim Jong-un rejecting him at last week's summit meeting?

Chronic liars like Donald Trump are not equipped to deal with adversity because they can only deal with adversity by force or by leaving. So whenever Trump is asked a question he does not like, he walks out of the room. Donald Trump has done that repeatedly. Trump cannot tolerate anything that challenges him and would force him to have to think or acknowledge having done something wrong, as happened with Kim Jong-un. Donald Trump was going to be rejected so instead he flipped it immediately and decided to walk out. Walking away made Trump feel strong in his own mind. Trump converts anything that's lost into something powerful

When Nancy Pelosi publicly rejected and embarrassed him about his border wall, that must have enraged Trump in the same way as the North Korea summit. This "national emergency" was the result.

What is it like to be around someone who is a chronic liar? What does that do to people emotionally and cognitively?

The Washington Post has been documenting Donald Trump's public lies while president. The total is now over 8,000. Does Donald Trump actually believe his own lies?

Trump believes his own lies. Trump likes to use the phrase "truthful hyperbole." He mentioned this in his book "The Art of the Deal." This is another way of saying "lying" but calling it "truthful." Hyperbole is exaggeration, which means it's untrue. It is not exactly lying, technically, but it is. The truth does not matter to Donald Trump.

Lying has a corrosive impact on the truth and shared reality. Once you stop seeking truth it is like starving your mind. You're starving your psyche. You become less and less able to function other than by being a liar and a cheat. You become less competent and less able to think clearly because you have never faced truth. You've always evaded it. Trump does not face the truth about his own cruelty. We have a president with a starved psyche. Donald Trump is not able to think. This explains much of his behavior and the chaos of his policies.

That is exactly right. "Donald Trump is capable of doing kind things but he's not a kind person. He's capable of being personable but he really doesn't like people." That describes a sociopath. But Donald Trump is more than a sociopath.  Donald Trump is a narcissist, liar, sociopath, racist, sexist, adulterer, baby, hypocrite, tax cheat, outlaw, psychopath, paranoid, fraud, ignorant, vengeful, delusional, arrogant, greedy, contemptuous, unsympathetic, without empathy, learning-disabled, cruel, obstructer of justice, threat to the Constitution, a traitor.

That is who Donald Trump is. He is untreatable. Until people understand that this situation is not normal and that Donald Trump, the president of the United States, is not manageable or treatable unless he's quarantined or marginalized to make him not dangerous, there is really nothing to be done.

We married him. We voted for him, and he's now our husband, like in the original Ingrid Bergman movie from which the term "gaslighting" was popularized.

Given your expertise on Donald Trump, if called to testify before Congress what would you say?

I would say, first of all, this is not normal and we have to start with the premise that there's not equal truth on both sides of an argument. We should assess what Michael Cohen says about Trump and then compare it to the actual documents and other proof of Trump's behavior. We should also evaluate what Cohen said about Trump relative to what we have seen Trump do in public and other things that have been revealed about his behavior. The evidence is all there.

The second thing I would talk about is if you don't search for the truth, the psyche starves. I am very concerned that America is starving right now. We are not looking at the truth because looking at the truth makes people anxious and it makes people uncomfortable. Anxiety is a source of information, not something that you have to drown or yell about or drink to oblivion. You have to find out what it is that's making you anxious.

I would also explain how Donald Trump is like a corpus colossum in a brain which has become so hardened that one side of America cannot speak to or listen to the other side. Donald Trump attacks thought itself. He attacks thought and reality and facts so much that people did not pay attention to Michael Cohen's statement about how Trump will not go willingly. People are not paying enough attention to how Donald Trump is a violent person in his core soul. People do not want to face that reality because it requires too much decision-making and too much responsibility. Impeaching Donald Trump is scary.

Michael Cohen looked scared during his hearing before the House Oversight Committee. His confidence is a mask. If Cohen reached out to you for advice what would you tell him?

I would tell Michael Cohen that he has every reason to be scared. Cohen should make it a condition of his providing testimony and other evidence that he receives protection while in prison. Michael Cohen is not safe. He has been called a "rat" too many times. Likewise, the United States is not safe under Donald Trump.