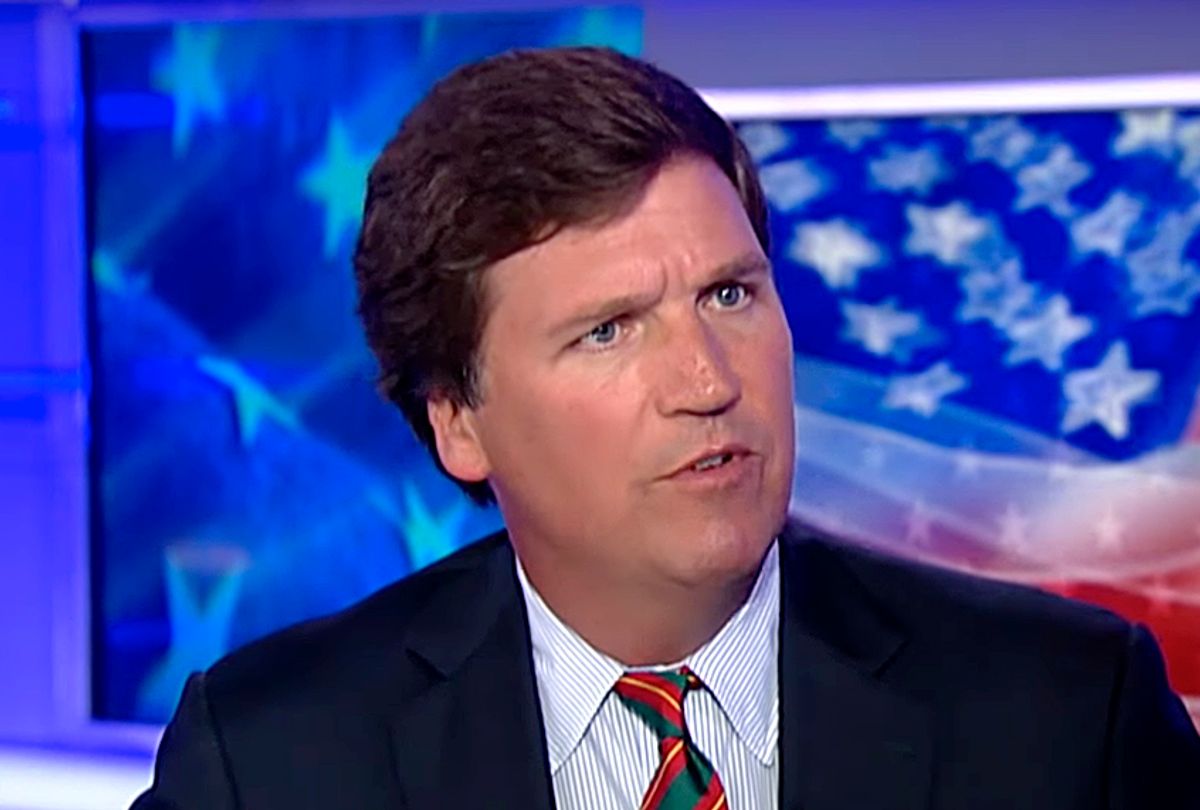 Late Sunday, left-leaning watchdog group Media Matters published a lengthy exposé of Tucker Carlson's years of calling into a shock-jock radio show called "Bubba the Love Sponge" and bro-ing down with the hosts by celebrating their shared animosity towards women.

Researcher Madeline Peltz, in a heroic act of self-sacrifice, clearly listened to hours upon hours of this show and discovered that not only was Carlson game for the contest of "who can be the biggest pig towards women" but was often the clear winner, saying things so repulsive that even the hosts occasionally recoiled, calling his views "twisted" and "demented."

Carlson minimized child rape, so long as the rapists "married" the victims in legally unbinding ceremonies first, objected to rape shield laws, declared that women "need to be quiet and kind of do what you're told," and viciously attacked any woman perceived as independent or uncontrolled by a man as "anti-man" or "anti-penis," arguing that they needed to be spanked.

Carlson's response to this exposé, at least so far, has been predictable: He paints himself as the victim of a campaign of political correctness run by humorless scolds.

"Media Matters caught me saying something naughty on a radio show more than a decade ago," Carlson wrote in a response statement, adding that he has no intention of engaging in the "usual ritual contrition" and instead portraying his nightly Fox News show as a more authentic display of his views.

But while the Fox News audience will no doubt lap up this excuse, and even pity Carlson for supposedly being the target of the fun police, other people should not be fooled by the "just joking" excuse.

For one thing, much of the material Peltz uncovered wasn't just jokes. Especially on the subject of Warren Jeffs, the leader of a breakaway Mormon sect who ran what amounted to a child sex trafficking ring under the guise of "religion," Carlson sounds deadly earnest. He repeatedly insisted that because Jeffs and his followers conducted "marriage" ceremonies -- which were not legal or binding -- with underage girls before raping them, it was different from "pulling a child from a bus stop and sexually assaulting that child."

Even as Bubba and his co-host objected, Carlson continued to argue that Jeffs, who was recorded telling an underage "wife" that sex with him was about feeling "the spirit of God," was being railroaded. His defenses of Jeffs were so passionate that even the shock jock hosts seemed disturbed, and kept reminding Carlson that the "pedophilia aspect" of Jeffs' offenses was legitimately troubling.

Other segments are indeed jokier in tone, since "Bubba the Love Sponge" was supposed to be a comedy show. But Carlson wasn't being ironic when he describes female assertiveness as "cunty," said that Hillary Clinton intended to "castrate" men, or suggested that female independence should be corrected with "spanking." The supposed humor is based  more on the crassness of the language than anything else. There's not much doubt that the views being expressed — autonomous women are scary and need to be brought under male control — are those Carlson sincerely holds.

Turning to Carlson's Fox News prime-time show, there is clear evidence that his fear and loathing of independent women is entirely serious.

Take, for instance, Carlson's well-documented obsession with feminist journalist Lauren Duca. She is young and conventionally attractive, but also outspoken, and the combination clearly drives Carlson bonkers. As he said on "Bubba," he wants women "to be quiet and kind of do what you're told," particularly if he sees them as sexually attractive. When he brought Duca on his show to "debate" her, he insisted that because Duca had written about "feminine" topics like fashion and pop music, she was unqualified for serious political analysis.

Similarly, Carlson has gone after Rep. Alexandria Ocasio-Cortez, D-N.Y., who is also young and pretty. He invited Fox News analyst Brit Hume on his show to dismiss her as the equivalent of "a five-year-old child." On another episode, Carlson called Ocasio-Cortez a "screechy moron."

Carlson has also argued in favor abortion bans on the grounds that forced childbirth is beneficial for women because it frees them from the demands of paid employment. He has suggested that men need to make more money than women in order to avoid self-destructive behavior, and that civilization cannot survive the equal inclusion of women in leadership roles. Last March, Carlson trolled feminists by dedicating Women's History Month to a series of segments featuring "men's rights" activists and other professional misogynists who argue that men are the real victims  of sexism in America.

In other words, Tucker Carlson joking around and Tucker Carlson being deadly serious are the same man: He believes that women exist not as independent people, but as objects put on earth to tend to men's domestic needs and sexual desires, to serve as decoration while leaving the work of creating and shaping culture to men. In light of this, his weird defenses of Warren Jeffs make more sense. If you don't believe that any women are truly legal adults on the same footing as men, then what's the difference between marrying a 12-year-old and a 30-year-old?

There are many kinds of humor out there, and not every bad or offensive joke should be taken seriously. But humor can also function as a normalizing force. Research shows this is exactly how sexist jokes work, by making the possibly offensive idea that women are inferior feel socially acceptable. Studies find that after men hear jokes denigrating women, they are more likely to accept domestic violence and to feel that rape is justified.

Of course, this normalizing aspect of humor can cut both ways. Anti-sexist jokes can warm people who might otherwise be hostile up to feminist ideas. The feminist deployment of humor, often edgy humor, on blogs and social media has no doubt been a major reason feminism has become more popular in the past decade.

But that only reinforces the point: Jokes aren't some untouchable category, separate from larger society. Humor feeds off the culture, and reshapes it. Even Carlson's response to the Media Matters article used humor to make a point — by calling his comments "naughty," he was suggesting that his vicious misogyny should be regarded as unimportant juvenile antics, like fart jokes or "Goose the Cat" in this weekend's hit movie, "Captain Marvel."

But in doing so, Carlson is being dishonest, and he knows it. His own Fox News show demonstrates that his sexism is deadly serious, and so-called humor is just one rhetorical device in an arsenal he uses to promote his ugly views about women.