Paul Manafort, Roger Stone, Rick Gates and Michael Flynn: What will we learn this week? 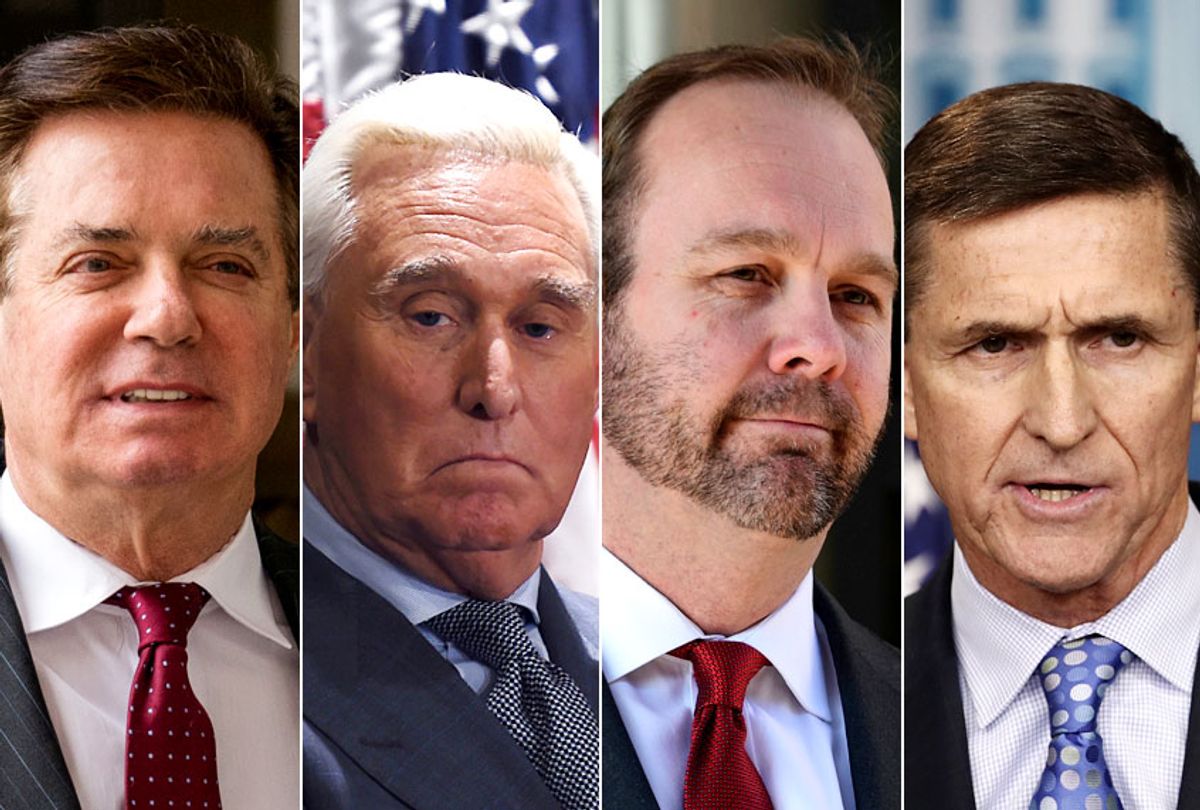 The next few days could be among the most exciting yet in the Russia investigation -- or they may be duds. It all depends on what happens in federal court to four of Donald Trump's close associates and campaign officials, beginning on Wednesday. Former campaign chair Paul Manafort, former deputy campaign chair Rick Gates, former national security adviser General Michael Flynn and longtime Trump friend and political adviser Roger Stone will be making appearances before various judges over the next three days.

All the tea-leaf readers suggest that we will have a better idea of where Robert Mueller's investigation stands at the end of it. But we've heard that one before so it's best not to get one's hopes up. Still,  it's safe to say that we will probably know more than we did before.

Manafort will appear before Judge Amy Berman Jackson in Washington on Wednesday to be sentenced on two conspiracy charges revolving around undeclared foreign lobbying work he did on behalf of pro-Russian Ukrainian political figures. He could get as much as 10 years in jail and the big question for Jackson is whether he will serve his sentence concurrently or consecutively with the 47-month sentence he received in Virginia last week.

Berman is not expected to be particularly generous to Manafort after all the shenanigans he pulled -- violating bail and then lying to the government repeatedly after he had agreed to cooperate. Unlike Judge T.S. Ellis III in Virginia, Berman has not shown unusual hostility to the prosecutors so Manafort may find himself facing quite a few years in prison.

If his lawyers follow the same playbook they followed last week, they will undoubtedly emerge with another thinly veiled attempt to get Donald Trump to pardon him by telling the press that there was "no collusion." Whether they can say that may depend upon whether any more information is revealed about Manafort's dealings with his Russian friend Konstantin Kilimnik, with whom we know he shared campaign polling data, details of which were redacted in earlier court filings. If that remains under wraps in this case, we may never know exactly what took place, which would be a real disappointment.

Also on Wednesday, Michael Flynn is scheduled to appear before Judge Emmett Sullivan in a Virginia courtroom to discuss whether he should finally be sentenced for crimes he pled guilty to more than a year ago. Prosecutors were happy with his cooperation last December and recommended no jail time but you may recall that the judge exploded after looking at the evidence, telling Flynn that he had "sold out" his country and strongly suggesting that Flynn "cooperate" some more lest he face some real time in jail. On Tuesday night Flynn's lawyers filed a request for another delay so he can keep cooperating in another case regarding the bizarre alleged plot to kidnap an exiled Turkish cleric living in America and hand him over to the that nation's government. This seems like a wise move considering the judge's previous reaction.

Mueller's office has behaved oddly about this case. In the latest filing, prosecutors  say that while Flynn could potentially testify more, "his cooperation is otherwise complete." As former U.S. attorney Joyce Vance told Rachel Maddow on Tuesday, "It's unusual for a prosecutor to be willing to give a cooperator credit at sentencing before his cooperation is done, before he has testified." She suggested that "there is something we don't know that Bob Mueller's team knows." There's always the possibility that Mueller's office thinks the former general's service to his country makes him a standup guy except for these little hiccups with Russians and Turks. If that's so, the Mueller investigation isn't quite as unimpeachable as we might have hoped.

On Thursday, Manafort's former business partner Roger Stone will also appear before Judge Jackson to set a trial date for his charges of lying to Congress and obstructing the Russia probe. Stone could be sent to jail immediately if Jackson determines that his repeated violation of the gag order requires it. Stone has been dancing as fast as he can to explain away his reckless behavior but is clearly close to running out of chances.

Prosecutors have asked for a trial date in October, which would normally suggest that they are not planning to wrap up their investigation anytime soon. But a couple of U.S. attorneys from the D.C. district have been added to the team, so some legal observers think it's possible this case will be transferred to that office if Mueller closes down his investigation before then. In any case, the Stone saga is just beginning, with or without the special counsel.

The case that may reveal the most about the status of the Mueller investigation will be Friday's status hearing for Rick Gates, who pled guilty over a year ago and has apparently been cooperating with the special counsel in a number of different aspects of the investigation. Prosecutors have delayed Gates' sentencing four times already. If they ask for another delay on Friday it means that he is still cooperating and they expect him to be useful in ongoing cases we may not even know about.

Gates is one of the few characters in this whole drama who was around for the campaign, the transition, the inauguration and the first part of the Trump presidency. He was a major player in the inauguration so it's possible that his testimony will be needed in the new investigation of the inaugural committee just opened in the Southern District of New York.

None of this will give us any more than vague clues about the conclusion of Mueller's investigation or whether there will be more indictments ahead. All the breathless reporting about a report being imminent has so far proved to be premature. But that doesn't mean any of this is incidental. This week, four people close to the president are appearing in federal court to face charges of corruption, lying, obstruction of justice and conspiracy -- all of it stemming from an investigation into foreign interference in the election. Trump can scream "Witch Hunt" all he wants, but the people around him are looking awfully witchy these days.