The perils of "dangerous" comedy, or what makes a notorious warlord laugh?

The Netflix series "Larry Charles' Dangerous World of Comedy" gets dark, without much humor 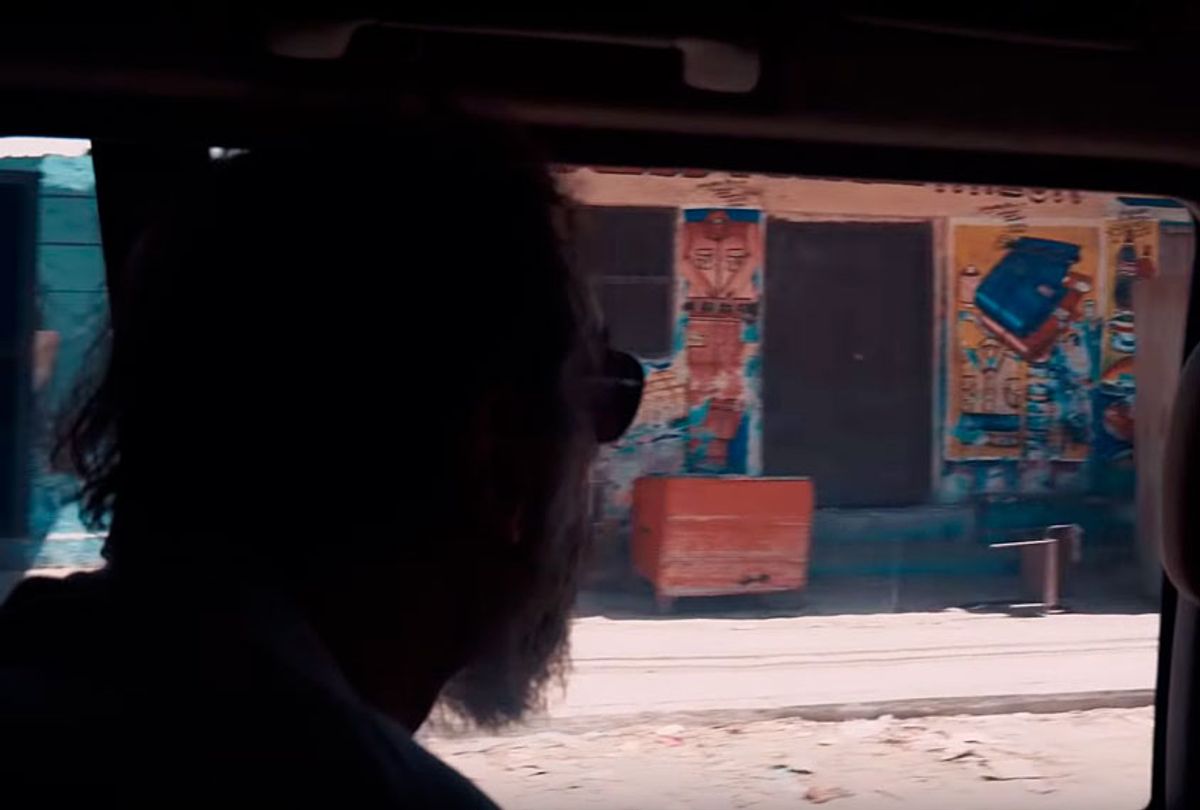 A defining moment of “Larry Charles’ Dangerous World of Comedy” finds Charles, director of such films as “Borat” and “Religulous,” confronting Joshua Milton Blahyi on a street in Liberia under cover of darkness. Well, not total darkness; Charles' crew has lights. But the point is made, by inference, that this is a clandestine meeting, one of which sensible people would disapprove.

Blahyi found Christ in 1996 when the first Liberian Civil War that had shredded the African nation since 1989 was ending. He is now a preacher. In 2007 he reportedly founded Journeys Against Violence, a charity dedicated to re-training former combatants to find manual labor positions.

To many folks, Blahyi is better known by his old nickname General Butt Naked, which he bore with pride as a commander during that war. As noms de guerre go, Blahyi’s tops the list of hilarity, to the point of inspiring Trey Parker and Matt Stone to name the primary antagonist after him in their musical “The Book of Mormon.”

On some level, it’s not hard to understand why Charles would want to include him in his series. You can almost hear him telling the story to his fellow “Seinfeld” writing alums. “I mean, I’d gone this far. Why not?”

But there’s a gag as one envisions it, and the reality of the thing. Charles, sounding hesitant about his decision, opens the interview asking Blahyi, whose reported war crimes include cannibalism and the butchery of children, what human flesh tastes like.

Later, Blahyi  gets slightly uncomfortable as he recalls the last child he slaughtered: a three-year-old girl he insists he didn’t want to kill but did so, he says, at the insistence of the girl’s mother, who handed her over as a sacrifice.

The woman Blahyi is referring to is not there to verify his account. However, Charles could have questioned Blahyi’s passing the blame for that child’s murder onto that child’s mother. But why let that get in the way of humor potential? To paraphrase Borat, “When you chase a dream… you sometimes do not see what is right in front of you.”

“Dangerous World of Comedy” premiered about a month ago to limited reviews or explorations. Having endured all four episodes, I have a number of theories as to why that could be the case, beginning with the basic truth that if you have the word “comedy” in the title of your series, it should probably be at least intermittently funny.

Perhaps Netflix executives did not expect that Charles would, say, insert a clip from an old sketch variety show of zombies munching on body parts at a diner into his interview with a cannibalistic war criminal. You know, to lighten the mood.

A graver turn-off of a show like this, though, is what it says about our culture’s willingness to accept so-called acts of comedy as a suitable vehicle for cruelty. Charles’ strain of humor leans toward the dark side. If you’re seeing a “Seinfeld” that includes a few inky, just-short-of-depraved jokes, odds are he’s behind them.

But while finding comedy in gallows-style, absurdist evil is a defensible tradition as old as shaming the devil, what much of “Dangerous World of Comedy” demonstrates (intentionally at times, but also largely via ignorance of execution) is how flimsy the line is between cruelty and skillfully crafted outrageousness.

A portion of this is an outgrowth of the rebellion against “political correctness,” a concept born out of good intentions whose name is a hangover from the 1990s. A few years ago, to point out the ugly intentions behind a statement explained away as a joke would get a person branded as a blind adherent to P.C. culture, while the heroic perpetrator would wear the cape of the “equal opportunity offender.”

As the furor surrounding Tucker Carlson proves, those excuses still hold sway. Observers and media critics can debate over whether Carlson will or should be fired by Fox — save your breath, he’s staying right where he is — but what hasn’t been examined from my observation is the continued effectiveness of the “it was just jokes” defense.

This has been a right-wing fallback since the days when Rush Limbaugh was the top spokesperson of neo-conservatives and modern gaslighting tactics were still in diapers. Now crying out at the crimes of liberal close-mindedness is as normal as brushing off punchlines about child rape and degrading women as nothing more than jokes, as Carlson has done.

Why not? When a certain masturbatory comedian I’ll not name made an early return to the public eye with jokes at the expense of the teen survivors of the mass shooting in Parkland, Florida — this, after vowing to, in his words “step back and take a long time to listen” —  the mainstream media was passionately outraged. But the audience at Governor’s Comedy Club on Long Island thought it uproarious.

When Kevin Hart removed himself from hosting the Oscars after being called out on homophobic set material and tweets dating back to 2011, he didn’t expressly apologize. Or rather, he did and then the defended the material. Sorry but you know . . . comedy.

The Hart controversy didn’t hurt the awards telecast or his brand. On April 2, his new special, “Kevin Hart: Irresponsible,” debuts on Netflix. Hart, it would appear, is not that dangerous. Nor is Carlson; he’s just a lazy bigot with a primetime platform. None of the celebrities listed above are “dangerous.” Not (supposedly) like Charles.

In that light, why wouldn’t Charles feature, with little to no pushback, interviews with war criminals and soldiers who tell him how funny it was to see their enemies being dragged behind vehicles or recall the laughs they’d get at watching ambushed opponents beg for their lives? Laughter is a coping mechanism, after all. Laughter, even the variety gleaned by making light of a PTSD survivor strangling his spouse, is therapeutic.

What we’re circling around here are “no-go” areas of comedy which, like opinions of what is actually funny, can be highly subjective and dependent on the individual’s threshold for offensive material — the definition of which is in itself highly subjective.

“Dangerous World of Comedy” shows two kinds of misfires. One is the variety that’s all-too-familiar these days: punching down. In Charles’ quest to travel to the “unlikeliest of places” and to speak to comedians — and war criminals — about “just how dangerous and how meaningful the world of comedy can be,” according Netflix’s press release, he manages to punch very, very far down for shock value.

While he travels to multiple continents and shows footage of war zones and buildings reduced to rubble, the series really fetishizes the colonizer’s view of Africa as one of those "shitholes" the president so fondly referred to. He talks to a number of Liberian comedians, but there’s also ample inclusion of severed heads and shots of bodies, at least one of which seems to be vivisected, in the middle of the street. These are very clearly rendered, more so than the blurry image of a public beheading shown in Saudi Arabia.

And this in, in turn, does wonders to shore up the very stereotypes about these places and the people living in them that “Dangerous World” is ostensibly seeking to champion.

Within the episode titled “Gender,” Charles spends time with women who have forged comedy careers in some of these “unlikeliest of places,” such as Nigeria. He also gives ample oxygen to male comics whose most popular routines include lengthy gags trivializing rape.

Of one Charles says, “Basket Mouth is cool.” He worked his way up from nothing, the star continues, “and I respect that.” Indeed, his respect for these groundbreakers is so complete that Charles does not question another comedian as he explains the ground rules of a successful rape joke — you know, to justify why he continues to make rape jokes.

“You can make almost any subject palatable to an audience if you get the right angle,” Charles says, appearing to be in agreement. “But if you don’t . . .”

“You’re in trouble,” the comic says, finishing the host’s sentence.

Which bring us to the second misfire, demonstrated by Charles’s interviewing technique and narration, which deflates the all-too-popular notion of comedians being better truth tellers than journalists these days. This is a concept where both extremes of the political spectrum appear to be in agreement, even though performers who mine comedy from current events and the news itself would beg to differ.

In response to this notion, I invite you to watch the two-hour Frontline installment, “The Trial of Ratko Mladic,” airing Tuesday, March 19 at 9 p.m.

Within that film, producers Henry Singer and Rob Miller do a deep dive into the war crimes trial of the man accused of committing the worst atrocities Europe has seen since the second World War.

Singer’s documentary is an exercise in care and precision, giving viewers an accurate sense of the agony and emotion surrounding such trials as we see testimony from Mladic’s victims set against the passionate loyalty demonstrated by his community, those who served under him (and admit to killing at his command) and his family. It is journalism, five years in the making, and it is agonizingly honest.

Specific moments within that film underscore Mladic’s cruelty, particularly a scene in which a father is seen calling out to his son, who is hiding in the forest, assuring him that he’ll be fine if he shows himself and surrenders, as the soldiers told the man. The mass grave in which the man and his child’s remains prove the evil of that lie.

Men who commit such atrocities don’t deserve to be polled for their taste in jokes. Besides, I have a pretty good idea of the things they’d laugh at.

Within “Dangerous World of Comedy” hides a few rays of light; its examination of the women and gender fluid male comedians risking their safety to tell jokes in places like Nigeria and Saudi Arabia, for example, show the possibility of what this series could have revealed about the power of humor.

Another strong example is in the second episode, which moves its focus on those who use comedy to process surviving wars to the soldiers who fought in them, featuring veterans who build their comedy sets around their experiences in combat. In the case of Bobby Henline, who sustained burns over much of his body, comedy is a means of connecting with his family and with an audience that may be otherwise inclined to be uncomfortable at the sight of him.

Of course, that same episode also includes a veteran who founded a comedy network that features, among other things, gags about trauma-related abuse. The network’s twisted sense of humor is meant to be therapeutic, the man says, and Charles does not debate him. He’s a comedian. As he declares at the tail of “Dangerous World of Comedy," comedians are “the heroes of free speech.”

True, to a point. Comedians also have the power to choose what and who to champion and humanize, particularly in authoritarian societies where comics are considered to be criminals.

This is as good a place as any to engage in that classic of a comedy set’s structure, the call-back.

Since Charles asked: What, do you suppose, makes the child murderer and cannibal formerly known as General Butt Naked laugh today?

Bill Cosby and his show “Kids Say the Darndest Things.” “And kids,” Blahyi says, “make me laugh a lot.”

It's almost enough to make a sensible person cry.