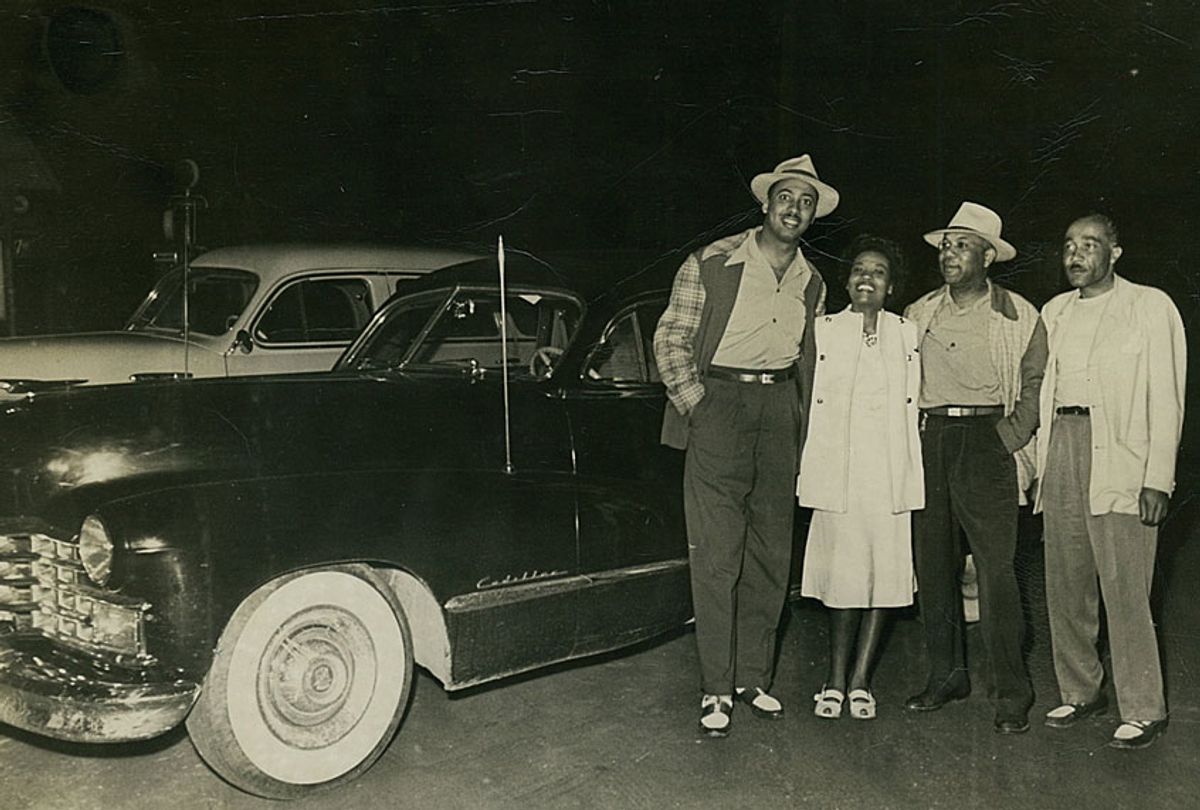 "Green Book" won three awards, including Best Picture, at this year's Oscars. The movie is not universally acclaimed. It has been justifiably derided as an example of a "white savior" movie. This is a narrative device in which a white main character saves or otherwise helps black and brown people in such a way as to rob the latter of any agency in their own lives. The white savior film represents a broader cultural problem: many white Americans want salvation and forgiveness for the country's racial sins — both past and present — but do not want to do any substantive work or surrender any unearned societal advantages to achieve such a goal.

The audiences who flock to white savior films want simple solutions to complex social problems. As such, the white viewers of "Green Book" and other white savior films also want to imagine themselves as heroes on the correct side of history instead of as people who are either actively or passively complicit in racial injustice and oppression against nonwhites.

In total, the voters who gave "Green Book" the Oscar for best picture likely thought such a gesture would be a balm for racial strife and discord in the Age of Trump. They were wrong.

However, its success at this year's Academy Awards could represent an opportunity to learn more about the actual Negro Motorist Green Book and its role in the long black freedom struggle.

In an effort to answer these questions I recently spoke with Yoruba Richen. She is an award winning documentary filmmaker, producer and screenwriter. Richen is also a recipient of Fulbright and Guggenheim fellowships and is a Distinguished Lecturer and Director of Director of the Documentary Program at the Craig Newmark Graduate School of Journalism at CUNY.

Her latest film is "The Green Book: Guide to Freedom," which airs March 17 on the Smithsonian Channel. This conversation has been edited for clarity and length.

What are your thoughts about "Green Book" winning the Oscar for best picture, best original screenplay and best supporting actor [for Mahershala Ali]?

"Green Book" is part of a long tradition in Hollywood of "white savior" movies and other problematic depictions of race. What really disturbed me about "Green Book" is how the actual Negro Motorist Green Book has a very small role in the film. I also want to point out that the Green Book never touches black hands in that film, which is very odd, because it was a travel guide for African Americans to safely navigate segregated America. The places that Dr. Shirley and his white driver stop at in the film were also very subpar and rundown. In reality there were many nice hotels and other locations listed in the book.

The movie also does not adequately show how black Americans actively resisted Jim Crow American Apartheid by having our own businesses and other spaces. I found that very troubling in terms of what it signals about the writers' lack of understanding about black resistance to white supremacy and Jim Crow.

One of the places that the Green Book missed was the A.G. Gaston Motel in Birmingham which was owned by A.G. Gaston, a multi-millionaire and one of the country's most successful African-American businessmen.

The film missed a great opportunity to highlight the importance of such places that were listed in the Negro Motorist Green Book.

My parents and godparents both had copies of the Negro Motorist Green Book. I remember looking through it as a child. The Green Book is not just black folks' story, it is a story about America. That black people would have to have a book to travel safely in their own country is a searing indictment of the American democratic project.

The Negro Green Guide for Motorists Green Book was in black folks' homes. This was intimate. The Green Book listed places where we as black people could go for safe haven, for safety, to sleep, to eat, and to have recreation and pleasure. This is day-to-day life. The movie did not show this.

We do not know much about Victor Green. But what we do know it that he was a capitalist and a businessman. And the fact that he created this book to help African-Americans and to build black businesses shows that in a practical way he was a race man. He was a postal worker in Harlem which is also where he lived. Green got the idea for the book because of the trips that he would take with his wife, Alma, to visit her family in Virginia. During that journey they would have to deal with Jim and Jane Crow segregation and how best to navigate those roads.

Green also had a Jewish friend who had a guide for Jewish families for places in the Catskills where they could go to vacation. Green thought that a similar guide would be something that would be very useful for his community. It is always important to highlight how the Negro Motorist Green Book existed because of segregation and the threat of violence, but it also was used and created to help black people go to places of recreation and pleasure. By the early 1940s, it was called the Negro Motorist Guide For Travel and Vacation. So "vacation" was in the title very early on, starting in the early 1940s.

Resistance to American Apartheid took place in the consumer's republic — shopping, consumer goods, cars, clothes, home furnishings, travel, etcetera. These were all battlefields. For example, a black person with a nice car was viewed as a threat by many white Americans in the era of Jim and Jane Crow--and that still persists today.  There were informal rules in the South and elsewhere that if a black person and a white person arrived at a four way stop at the same time that the black driver had to yield to the white driver or face violence.

You are absolutely right. Beyond the humiliation when black drivers would have to let white people pass and have the right of way, many African Americans who traveled would keep a chauffeur's hat in the car with them. Automobiles and the freedom to travel were very important for civil rights. The car was a way of escaping racial apartheid, it was a way of actually helping us leave the South because of the domestic terrorism that was happening to African Americans at that time. The two great migrations of blacks from the South to the North and other parts of the country were really examples of people escaping violence.

The automobile also symbolizes the entrance into a new middle and upper class. All of the things that the automobile symbolizes in America, such as freedom, mobility, wealth and materialism, applies to black people too. We just had different challenges around navigating that. Freedom for black Americans was literally a matter of life and death. The car helped us to survive and escape racial terrorism.

What was the role of Standard Oil in how black people empowered themselves through using the Green Book?

This was an example of a corporation doing some good. The Esso gas stations were owned by Standard Oil, which in turn was owned by the Rockefellers. Esso had black marketers in place whose job it was to create advertisements designed to appeal to the African-American community. Esso also hired African-American chemists very early. The company was also one of the main distributors of the Negro Motorist Green Book. This is one of the main ways through which the green book became so popular and widely available.

What were the choices you made in creating your documentary "The Green Book: Guide to Freedom"? What was the research process like?

One of the early revelatory moments I had was during a research trip to the National African-American Museum in Washington D.C. when I was able to look through the home movie archive.

That footage of regular African Americans just traveling and having fun and working? I thought this would be really great to include in the Green Book documentary as a way of constructing the narrative. Of course we talked with lots of older black people about their experiences actually using the Green Book, speaking with black folks who went to black resort communities such as Idlewild, Michigan, and of course the traditional work of reading as much material as you can and tracking down original sources.

What other stories could you have told about the Green Book?

For a future project we would go to more places. There are 9,500 listings in the book. The Green Book was international and in another documentary we could feature Canada and Mexico as well as Africa and the Caribbean. A profile of the white owned businesses would also be very interesting as well.

If you were granted the opportunity to consult with the writers and producers of the recent "Green Book" movie, what would you have suggested? How would you have helped them to avoid the many pitfalls and errors in their movie?

In the movie they travel through Iowa and Northern states as well. The film could have shown the main characters using the Negro Motorist Green Book in those places as well. If Dr. Shirley could have encountered some of the people who owned the properties listed in the Green Book, such as Mr. Galston, the film could have created a beautiful tapestry of what was happening in the black community during that moment of the civil rights movement and black freedom struggle.

The NAACP and other human rights organizations have suggested that given racial profiling, police brutality and other violations of black people's rights, that a new Negro Motorist Green Book for the 21st century is needed. Do you agree?

In many ways black people really do need a new Green Book. Look what happened to Philando Castile while he was driving his car in Minnesota. A new Green Book would also be a way to support African-American businesses. That was one of the most beautiful things about the original Green Book. Black people were supportive of our own businesses and that helped to build wealth in our community. And we certainly need that now. They ways that the original Green Book contributed to the entrepreneurial class in the African American community was something that we really tried to feature in our documentary "The Green Book: Guide to Freedom."