In 1990, "Do the Right Thing" was snubbed in favor of "Driving Miss Daisy." Just how much has Hollywood changed? 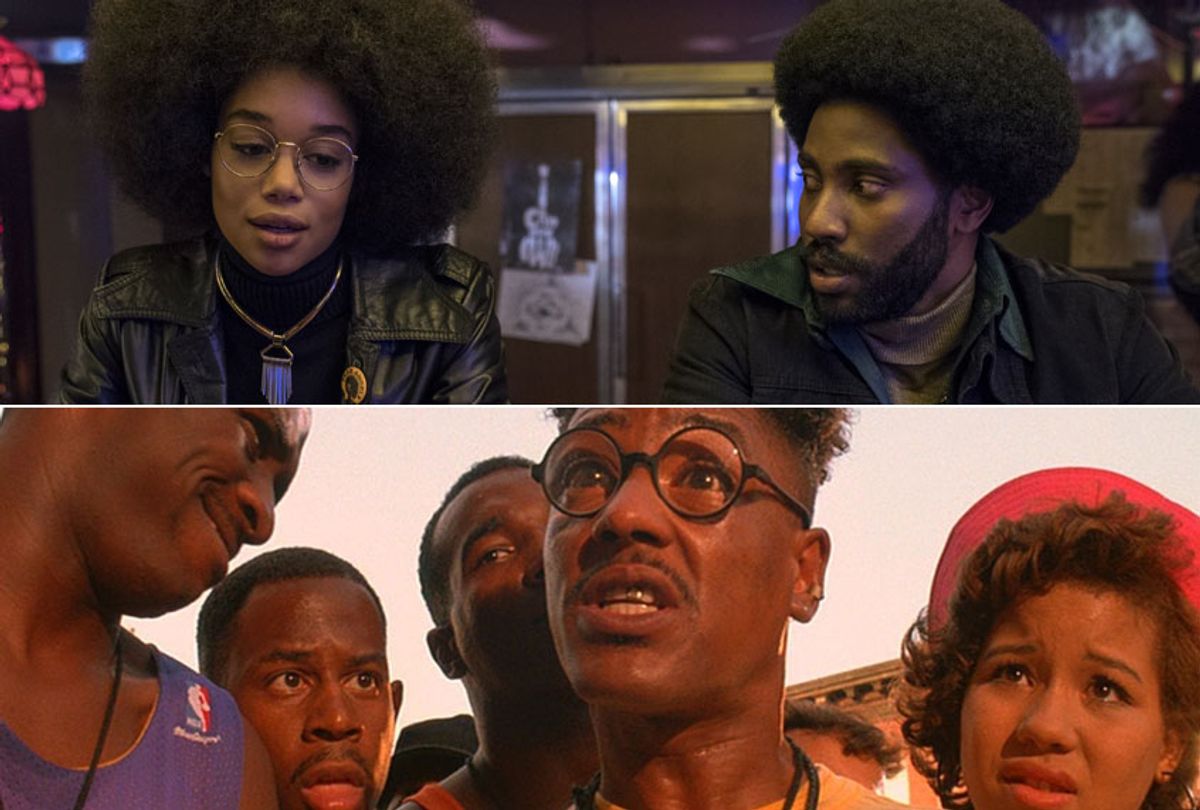 Spike Lee may finally win an Academy Award for Best Director. And not an honorary award, like he received in 2015, after being passed over, film after film, decade after decade, and none more tragic than in 1990 when "Do the Right Thing" did not earn a Best Picture or Best Director nomination, and lost its lone Oscar nomination for Best Original Screenplay to "Dead Poets Society." But nearly 30 years and 30 films later, Lee's brilliant 2018 offering, "BlacKkKlansman" racked up a half-dozen nominations, including Best Picture, Best Director, Best Supporting Actor (Adam Driver), Best Adapted Screenplay, Best Original Score and Best Editing.

However, this year's Best Picture category is a crowded one. Significantly, Ryan Coogler's inspiring, genre-defying "Black Panther" is nominated for the top award, as are "Bohemian Rhapsody," "The Favourite," "Green Book," "Roma," "A Star Is Born," and "Vice." (Barry Jenkins' acclaimed "If Beale Street Could Talk" is a notable snub.)

But by nominating "Green Book," which won Best Picture–Musical or Comedy at the Golden Globes, the Academy is celebrating yet another white savior film that claims to be dealing with "race relations" — reminiscent of 1990, when "Driving Miss Daisy" won Best Picture, the same year "Do the Right Thing" was largely ignored. This year, Spike Lee's film is at least in the running. But will history repeat itself through the film the Academy decides to name best?

The 1990 Oscars victory of "Driving Miss Daisy" has been an enduring gripe for Lee, for good reasons. "To be honest, after 'Do the Right Thing,' I said, 'That’s it.' You know?" the filmmaker told GQ last year. "That’s not to say I wasn’t happy to get the honorary award, but as far as Oscars, my thing has always been my body of work. What film won best film of 1989? 'Driving Miss Daisy.' Driving Miss motherfucking Daisy. Who’s watching that film now?" (It premiered in 1989, but was nominated in 1990, as was "Do the Right Thing".)

While the Best Picture category this year is more diverse, the success of "Green Book" will be a telling marker of how much Hollywood has actually changed in the time since April Reign started the #OscarsSoWhite campaign. After all, the crux of "Green Book" is "the oh-so-tired Social Progress film model," my colleague Melanie McFarland wrote, "created to allow white audiences to connect to their humanity and create a separation between their own sense of righteousness and that eternal bugaboo known as racism." Written by Nick Vallelonga, the film purports to be the "true story" of his father, Frank Anthony Vallelonga, who manages to overcome his racism to become a tour driver for black musician Dr. Don Shirley.

But the missteps and blindspots of Vallelonga's feel-good film go beyond even the contrived white savior trope. Dr. Shirley's family was not contacted or included in the creation of the film and have described it as a "symphony of lies," as well as another "depiction of a white man’s version of a black man’s life." Academy Award-winning actor Mahershala Ali, who plays Dr. Shirley and is nominated for a Best Supporting Actor Oscar for this role, apologized to the family, taking far more responsibility than the filmmakers themselves.

The film's title, "Green Book," derives from a survival guide called "The Negro Motorist Green Book," which was published in 1938 by postal worker Victor Hugo Green. It highlighted safe spaces where black travelers could eat and sleep in the Jim Crow South. Yet hardly any time is spent on this historic text, as the bulk of the film is dedicated to Vallelonga's humanity and transformation.

Similarly, "Driving Miss Daisy" also features a chauffeur-employer relationship turned into an unlikely bond, except the races are reversed and co-star Morgan Freeman is reduced to a stereotype. Meanwhile the stranglehold of racism is mostly left out. In this way, both "Green Book" and "Driving Miss Daisy" prioritize the humanity of its white characters and the comfort of its white audiences, while flattening America's virulent racial history.

The Oscars have a frustrating tendency to celebrate films of this kind. As Yahoo noted:

The Academy Awards have always been a flawed system, but the 1970s and 1980s had seen challenging pictures like 'The Godfather,' 'The Deer Hunter' and 'Platoon' take the top prize. By the time of 'Daisy’s' arrival, though, the tide began to turn, with an emphasis on feel-good, big-message movies. 'Driving Miss Daisy' can be seen as a precursor to the kind of comforting, uplift-above-all-else, self-congratulatory Best Picture winners that were to come, when 'Dances With Wolves' could beat 'Goodfellas,' 'Forrest Gump' defeat 'Pulp Fiction,' and 'Crash' win out over 'Brokeback Mountain.'

In 1990, Lee underscored "Driving Miss Daisy's" narrow, problematic view, saying that Freeman "still plays a subservient role. It tells me that we have a lot farther to go. In a lot of areas, the clock is being turned backwards." And, then-New York Magazine's film critic David Denby wrote, "I can't get away from the idea that Miss Daisy is part of the Bush era's hypocrisy — the public fantasy that everything is just swell in this country, when in fact we have catastrophic problems."

Ironically — and offensively — some 28 years later Vulture critic David Edelstein first described "Green Book" in a largely positive review as tapping "into a kind of nostalgia for when everything — even racism — seemed simpler, and ready to be legislated out of existence."

The face-off between "BlacKkKlansman" and "Green Book" also speaks to a larger story about where our country is going and if we as a nation will ever meaningfully reckon with America's foundation and the centuries of horrific racial violence that followed.

As I wrote when "BlacKkKlansman" first premiered, much of the film sees Lee connecting the dots between the '70s Klan and the Trump administration and the alt-right movement today, with the film's release date coinciding with the one-year anniversary of the white nationalist rally in Charlottesville, the violence of which left one counter-protester dead. Lee also shows the stinging parallels between the harassment, assault and violence of the police on black lives, then and now. "Let’s stop telling lies and teaching young people bullshit. The United States of America’s foundation is genocide of native people and slavery!" Lee told Time Magazine in 2018. "That’s the foundation —the very fiber." But he adds, "This film is about the world we live in" now.

Whereas "Green Book" is the film version of color-blindness, of the white people who quote Dr. Martin Luther King Jr. and yet have no empathy for black people who are killed by the police, no concern for the racial wealth gap or mass incarceration or the privatizing of education and the defunding of public schools, or for the U.S.'s constant military intervention in predominantly black and brown nations. It's for the white people who were so quick to believe a lawyer-written statement from the MAGA hat-wearing white teen from Covington Catholic High School in Kentucky, who traveled to Washington, D.C., to protest women's reproductive freedom, and yet who remain skeptical of the women of color who lead the Women's March, despite their numerous attempts at constructive dialogue, engagement with the community they harmed and accountability.

(Not irrelevant here are the backstories of its director and screenwriters: It's since been revealed that director Peter Farrelly used to flash his penis in the workplace; in a 2015 tweet from writer Nick Vallelonga, he agreed with President Trump, promoting an anti-Muslim conspiracy theory that Muslims in New Jersey cheered as 9/11 unfolded.)

It remains to be seen how the Academy will treat "Green Book" this year. While either "Roma" or "A Star Is Born" could take home the Best Picture statue, "Green Book" can be considered a frontrunner after it won Outstanding Motion Picture at the Producers Guild of America awards, which is often a predictor of the Best Picture Oscar. Will Academy voters award another white-savior film — that is, another lazy, unimaginative feel-good story for white people, where racism is a personal flaw that a well-intentioned white character just needs to overcome? The many nominations the film has racked up are not a good sign, especially considering that not a single woman director was tapped for Best Director, or their films for Best Picture, and Lee becomes just the sixth black director to be nominated for the Best Director category in the Academy's entire 91-year history. When Lee accepted his honorary Oscar a few years ago he famously said,: "It's easier to be the president of the United States as a black person than to be the head of a studio."

Even more importantly, will this nation ever engage with its history and present in a way in which the contentment of white people is not central? Will we instead finally prioritize the livelihoods of its marginalized populations? Neither America nor Hollywood have shown much indication that this year will be anything but business as usual.