From legal slavery to now, white women have always participated in white nationalist violence in many forms 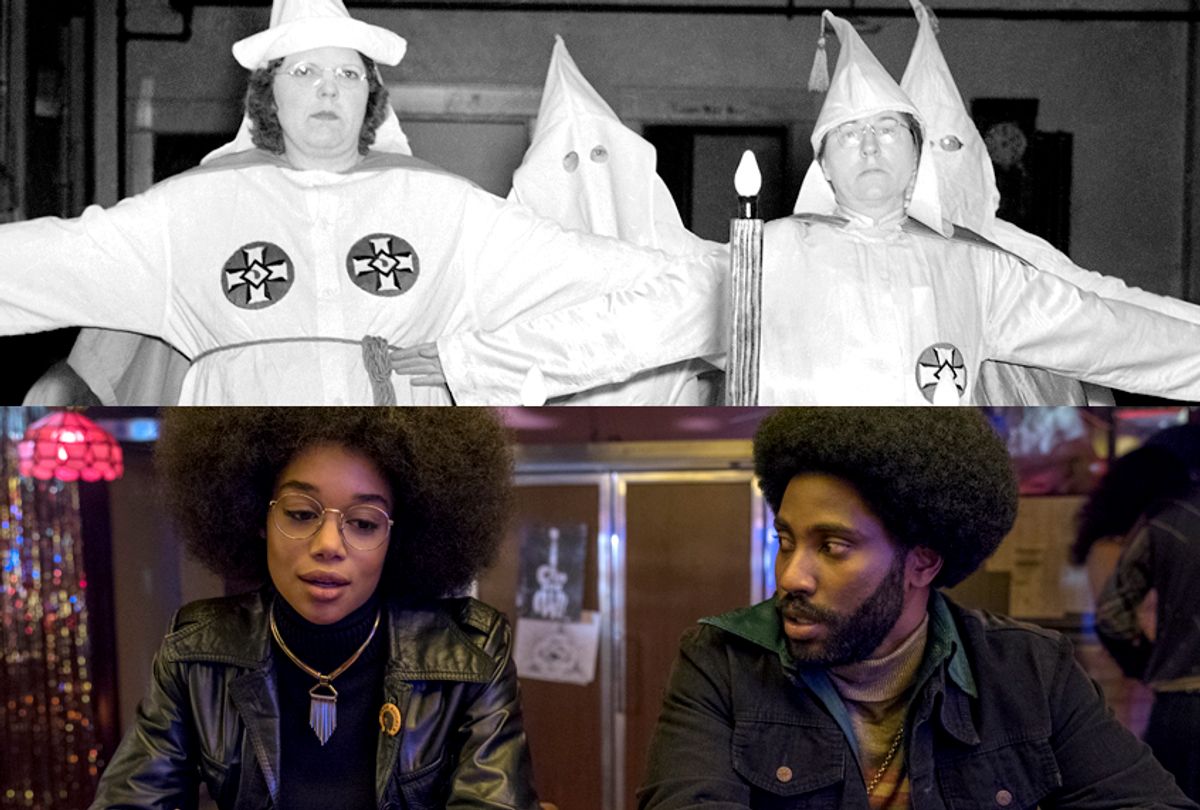 The women’s Klan salute to the cross; Laura Harrier as Patrice and John David Washington as Ron Stallworth in "BlacKkKlansman" (David Lee/Focus Features)
--

The new Spike Lee-directed film "BlacKkKlansman" begins with a scene from the 1939 film "Gone With the Wind." In it, Scarlett O'Hara discovers the rows and rows of injured and slaughtered bodies at a train yard following the Battle of Atlanta. As the camera pans out, a battered Confederate flag buckles and billows in the wind, in what appears to show honor and resilience, despite the flag's shabbiness and the Confederacy's defeat.

The opening is significant not just because it demonstrates one of Lee's greatest gifts as a filmmaker, in that he forces us to re-examine history, or as Rembert Browne wrote for Time Magazine, he holds "up a mirror to society, ever hopeful that we’ll eventually open our eyes." But in "BlacKkKlansman," Lee is intentional about not just showing the atrocities of the hooded, cross-burning men in the Ku Klux Klan in Colorado Springs, or of the former KKK Grand Wizard David Duke, or of the current president of the United States. Lee also demonstrates — critically — historically and presently, white women's investment in upholding white supremacy.

White women's stake in white nationalism has been, at times, a quieter presence. The sea of white men in collared shirts and cropped haircuts carrying tiki torches in Charlottesville one year ago bolstered a narrative that the racist belief and movement is primarily single-gendered. But Charlottesville came after the 2016 election when 53 percent of white women voters pulled the lever for Donald Trump — despite his overt misogyny, and despite his alleged history of sexual abuse.

Many liberals and progressives questioned how so many white women didn't see Trump's sexism as a deal-breaker — and likewise, and more terrifyingly, the people in his administration who continue to be hell-bent on rolling back reproductive rights. How could they be so invested in the white nationalist rhetoric that Trump said and endorsed at the risk to their own bodies? But as Melissa Harris-Perry wrote in Elle, history has proven that for the majority of white women, "Gender politics is a secondary game, not the main show."

"BlacKkKlansman" tells the real-life story of Ron Stallworth, played by John David Washington, who was the first black detective to work in the Colorado Springs police department in the 1970s. He, along with a more seasoned Jewish officer, Flip Zimmerman (Adam Driver), manage to infiltrate the local Klan chapter as it's undergoing a rebranding via its leader David Duke. This self-proclaimed reformed "organization" claims to be nonviolent, and has its sights set on members entering and influencing politics.

But in the film, which is brilliant, some of the Colorado Springs Klansman have trouble seeing and presenting this new, sanitized vision. Felix (Jasper Pääkkönen), a man so racist it is impossible for him to mask it, is married to Connie (Ashlie Atkinson), a woman who is only equal to her husband in her hate for black people. During "BlacKkKlansman," we see Connie begging to be included in Klan activity, ready to prove her worth. But she is repeatedly relegated to the sidelines and the kitchen. Her own husband's sexism is never a deterrent, though and in the end, Felix calls on Connie to commit a brutal act of violence. She obliges.

Lee's development of Connie's storyline highlights the larger pattern of white supremacist work that white women have waged in this country from slavery times through Jim Crow, including iterations of the Ku Klux Klan (and the women's KKK) and violent resistance to integration in schools and in neighborhoods. Connie's character also connects the current work of right wing pundits and political enablers like Tomi Lahren, Laura Ingraham, Ann Coulter and Sarah Huckabee Sanders, along with the more fringe female voices in the alt right, who continue to traffic in racist tropes and profit from the criminalization and scapegoating of black and brown people.

As Laura Smith wrote for The Cut, "Not long after Donald Trump was elected, Lana Lokteff, a woman member of the 'alt-right' gave a speech intended to galvanize other women. She told the crowd, 'Our enemies have become so arrogant that they count on our silence.' After all, as Lokteff said, 'When women get involved, a movement becomes a serious threat.'" Ninety four percent of black women voted for Hillary Clinton, so for Lokteff, "women" here is synonymous with white women. It’s an assumption that has been a central pillar of white women’s racism from legal slavery until now.

White women in the South held specific, abusive roles prior to the Civil War, especially connected to controlling and oppressing enslaved women who worked in the house, who were forced to take care of white children and who were often subjected to sexual violence. And in the famous, disturbing photos taken of black people being lynched and of the mobs who treated the atrocity as entertainment, scores of white women can be seen smiling with their children as a human life hangs lifeless behind them, introducing a new generation to the terrorism of white supremacy.

Perhaps the most documented period of white women's clear-cut involvement in the Klan and its violence against black people was in its second wave during the 1920s. As Lee reminds viewers in "BlacKkKlansman," a largely inactive Klan re-launched after the release of D.W. Griffith’s "The Birth of a Nation" film in 1915, where the most horrific stereotypes of black men (acted out by white men in black face) are put center stage, as is the fragility of white femininity.

"Despite the pervasiveness of sexism a century ago and the outsize role of men in the KKK, women in the 1920s Klan had power," Smith wrote for Timeline. "This wasn’t 'soft' power. Women didn’t merely sew Klan robes or bake casseroles for Klan picnics; they wielded actual power that shaped the societies in which they lived. Though they were staunch defenders of traditional domesticity, they were also active in social welfare movements and local and state politics. Under the leadership of Daisy Douglas Barr and several other women, they formed their own autonomous arm of the KKK, the half-million-strong WKKK, which lobbied for the creation of racist immigration quotas, segregation, and anti-miscegenation laws."

One woman, Mary Elizabeth "Bessie" Tyler, who ended up becoming "the first major female leader" of the 1920s Klan, according to Kathleen Blee’s book "Women of the Klan: Racism and Gender in the 1920s," was in charge of recruitment and publicity. In reaching a wider audience, Tyler expanded the Klan's hate beyond just black people and people of color to Catholics, Jews, immigrants and Communists. The message was clear: any hate is welcome, and under Tyler's tenure, many tens of thousands of new members joined the Klan's ranks.

"Though the men’s Klan was larger, the women’s KKK was better at public relations, and left an indelible mark on the organization by cloaking their white supremacist mission behind a facade of social welfare  —  a move that would become a hallmark of the modern-day right," Smith said.

Fast forward to 1955 and the brutal murder of the 14-year-old black boy Emmett Till. His killers, two white men, Roy Bryant and J. W. Milam, whom a jury declined to convict, were so arrogant, so assured by the fact that white supremacist violence has gone largely unpunished in the United States, that the two admitted to Till’s assassination in Look magazine one year later.

Till was in Mississippi visiting family from Chicago, and it was alleged that he flirted with Bryant's wife, a white woman named Carolyn Bryant. The two men went on to kidnap Till in the middle of the night, pistol-whip him, shoot him and then throw him into a river, with a 74-pound cotton gin fan tied to his neck. In 2017, it was revealed that Carolyn Donham, formerly Bryant, said in an interview in 2008 that she lied about what had transpired between her and Till during the trial.

These stories aren't new, nor is the message that white women have occupied central and supportive roles in the history of white nationalist violence. But in "BlacKkKlansman," much of the film sees Lee connecting the dots between the '70s Klan and the current administration and the alt-right movement, with the film's release date coinciding with the one-year anniversary of the white nationalist rally in Charlottesville, which left one woman dead. Lee also shows the stinging parallels between the harassment, assault and violence of the police on black lives, then and now.

Yet, just as Lee exposes the historical blindness of the white folks who were surprised after the election of Trump and who continue to utter empty phrases like "this is not what our country is about" — from Scarlett O'Hara to Connie, Lee reminds us not to forget the white woman who have caused, supported, committed or stood by as systematic and individual racial violence, in many forms, persists. It's also a message for the pussy-hat wearing, safety-pin donning white woman who have spent more time fretting over manners than unarmed black people shot by the police or brown immigrant children separated from their parents at the border.

"Let’s stop telling lies and teaching young people bullshit. The United States of America’s foundation is genocide of native people and slavery!" Lee told Time Magazine. "That’s the foundation —the very fiber." But he adds, "This film is about the world we live in" now.

"BlacKkKlansman," beyond the incredible story of Stallworth, is an unflinching reminder of America's foundation, present and our nation's legacy. And this deep-seated hate, this unspeakable racial violence might be America's only constant — one that many white women have been and continue to be active participants in.

Why the media fails at reporting on racism.