Beto launches his campaign: And it's clear that white men still have unfair advantages

Beto, Bernie and Joe aren't being oppressed in 2020. In fact, they all benefit from white male privilege 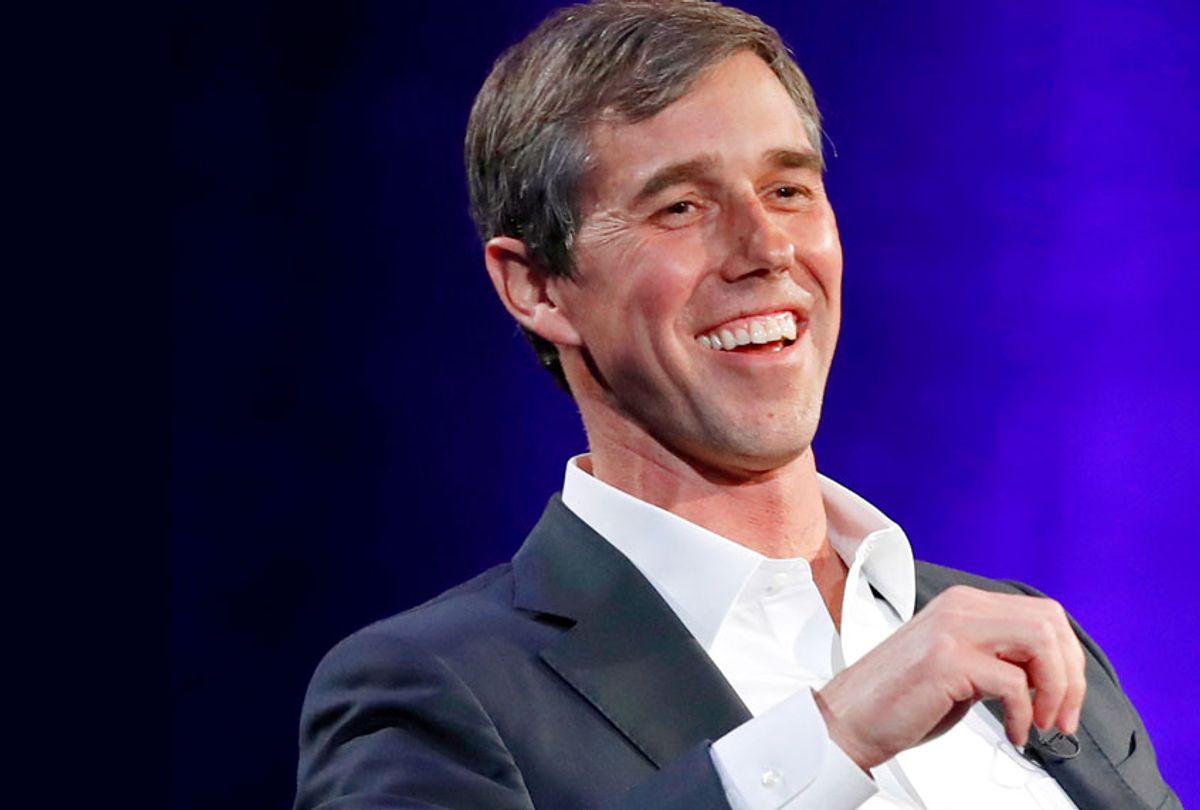 Cartoonist Scott Benson released a video a few years back mocking "men's rights activists" for their feelings of persecution resulting from women being slightly less unequal than they used to be. The cartoon shows a man and a woman standing under a spigot dispensing ice cream, and every scoop lands in the man's cone, who gulps it down happily. But when the woman manages to sneak in and grab a single scoop, interrupting the man's ice cream monopoly, he wails as if he's being oppressed as no person has ever been oppressed before.

That 40-second animation came to mind while reading the Vanity Fair cover story by Joe Hagan profiling Beto O'Rourke, the former Democratic congressman from El Paso who came startlingly close to beating Sen. Ted Cruz in Texas last year. The article was released Wednesday night, and shortly after the 46-year-old O'Rourke made the much-awaited but unsurprising announcement that he was running for president.

According to Hagan, O'Rourke has an uphill climb, but not because of his lack of experience as a three-term congressman with a relatively slight résumé, running against a field mostly comprised of senators. But because he belongs to the allegedly marginalized class known as white men.

"O’Rourke is acutely aware, too, of perhaps his biggest vulnerability — being a white man in a Democratic Party yearning for a woman or a person of color, a Kamala Harris or a Cory Booker," Hagan writes.

Even though Hagan puts this sentiment in O'Rourke's mouth, it's not at all evident that's what O'Rourke actually believes. The candidate himself points out that "government at all levels is overly represented by white men" and that people who might prefer to vote for someone who isn't a white man have "a very legitimate basis" for that decision.

O'Rourke can still sound tone-deaf on occasion, as when he says, "The only way I know to meet that challenge," meaning greater diversity, is to make sure "my team looked like this country."

That, of course, is the problem that many activists are railing against -- a system where white men are the anointed leaders and women and people of color are the support staff.

Hagan's piece expresses the ice cream problem in a nutshell: White men are so used to getting all the goodies that even having to share a fraction of the goodies with other people can feel like someone's stealing your ice cream.

Recent years have seen a shift towards more emphasis on diversity in the Democratic Party's leadership, without doubt. The previous two presidential nominees were not white men, after literally centuries of nothing else for either major party. In 2018, the Democrats also elected the most diverse Congress in history, so much so that it there's now a striking difference between the Democratic side of the aisle and the increasingly white and male Republican side.

But this shift toward better representation doesn't mean white men are being left out. Thirty-eight percent of Democrats in the House are white men. That group is only about 31 percent of the U.S. population overall, and since most white men vote Republican, it's safe to say that the proportion of Democratic voters who are white and male is well below that. So by any measure, white men still have a disproportionate amount of power among Democratic elected officials.

It is true that a Morning Consult poll from September 2018 showed that, in the abstract, Democratic voters preferred women and minority candidates. But when we leave the realm of hypotheticals and look at how actual candidates are treated, it becomes clear that white men still have substantial advantages over women and people of color.

Hagan's own article is a classic example. His profile of O'Rourke repeatedly invokes imagery of the white male savior figure, with references to "Star Wars," "The Lord of the Rings," "The Odyssey," Joseph Campbell's writings about the hero's journey and (for some reason) Bob Dylan. All this serves to frame O'Rourke as a figure akin to Luke Skywalker or Odysseus or Jon Snow, an epic hero who has been picked by supernatural forces to lead the rest of humanity.

The hero's journey is traditionally a male story and, at least in American and European culture, a white male story. There's a reason that efforts to change that in pop culture — to make the Jedi protagonist of the new "Star Wars" movies a woman, for example, or to give the orphan-with-alien-powers Superman story to a woman in "Captain Marvel" — with been met with widespread resistance from male viewers. The angry men behind such campaigns recognize that the stories we tell each other impact the real world.

If only white men get to be the brooding heroes tasked with saving the world in our dominant narratives, that helps enforce the idea that in real life only white men are viewed as legitimate leaders and sources of authority.

While men, especially white men, continue to be slotted into the savior role, women who run for office continue to provoke misogynist reactions. As writer Erin Gloria Ryan pointed out on Twitter, this glowing and heroic portrayal of O'Rourke can be contrasted with Vanity Fair's earlier coverage painting his fellow presidential contender, Sen. Elizabeth Warren, as a nag.

Despite defensive claims that it's not misogynist to call Warren "moralizing," that's pretty clearly what's happening here. Most of the candidates in the 2020 race — like most candidates in most races — are making moral claims for themselves, framing themselves as crusaders on behalf of the American people. When O'Rourke does that, he gets implicitly compared to a classical Greek hero. When Sen. Bernie Sanders does it, his fans share a video of a bird landing on his podium to suggest that his mission is being blessed by nature itself.

When a woman like Warren does it, however, she gets painted as your mom telling you to clean your room.

These stereotypes, where women are nags and men are conquering heroes anointed by the gods, make a difference in the polls. While a January Morning Consult poll found that 38 percent of Democratic voters rated themselves as more likely to vote for a candidate if she's a woman, when looking at real-world options, people's reactions are still shaped by positive stereotypes of men and negative stereotypes of women. Right now, former Vice President Joe Biden and Sanders lead in the early polls, with 31 and 27 percent of support among likely primary voters, respectively. Sen. Kamala Harris and Warren are well behind them, at 10 percent and 7 percent.

It's even worse when you look at the second choices voters have for candidates. Even though Biden is seen as a centrist and Sanders as a leftist, most supporters of each of those candidates name the other as their second choice. White-guy-ness matters more than ideology, it turns out.

No doubt both Biden and Sanders benefit from greater name recognition at this early stage of the race, but that, too, shows a built-in advantage white men possess. Both men are over 75 years old and have had decades to build political reputations, because, in no small part, they got their foot in the door when it was much more difficult for women to run for office and win.

In addition, both men have enjoyed, for years, the soft touch that white men get in media coverage, where the hard edges are sanded off so they can largely be portrayed as sweet, grandfatherly types. Any woman with a history of being as cranky as Sanders or as daft as Biden would be getting destroyed in the press, as demonstrated by the coverage that Sen. Amy Klobuchar is receiving for her history of being too hard on her staff.

It's impossible to imagine a profile of a female politician as hagiographic as the one Hagan offers O'Rourke. By his own measure, O'Rourke has left his family to carry on an introspective cross-country tour, jokingly telling reporters that his wife is raising the kids and he only occasionally helps. As writer Rebecca Traister pointed out on Twitter, a woman who abandoned her family for "self-discovery tours" would be regarded as a selfish monster, not a Byronic hero.

None of this is to say that it's dead certain that a white man will win the nomination in 2020. There are many months of campaigning ahead, with six Democratic debates scheduled before the end of 2019. The candidates who aren't white or aren't male or aren't either will have a real opportunity to put their case in front of the voters and, as Hillary Clinton and Barack Obama did, win them over.

But let's not pretend that it's not an uphill battle to overcome the built-in advantages white men have. And let's definitely not pretend that being a white man is somehow a disadvantage. White men are still getting more of the ice cream, even if other people are finally able to grab a scoop once in a while.