Jerry Nadler: Matt Whitaker "did not deny" that Trump tried to meddle in Michael Cohen case 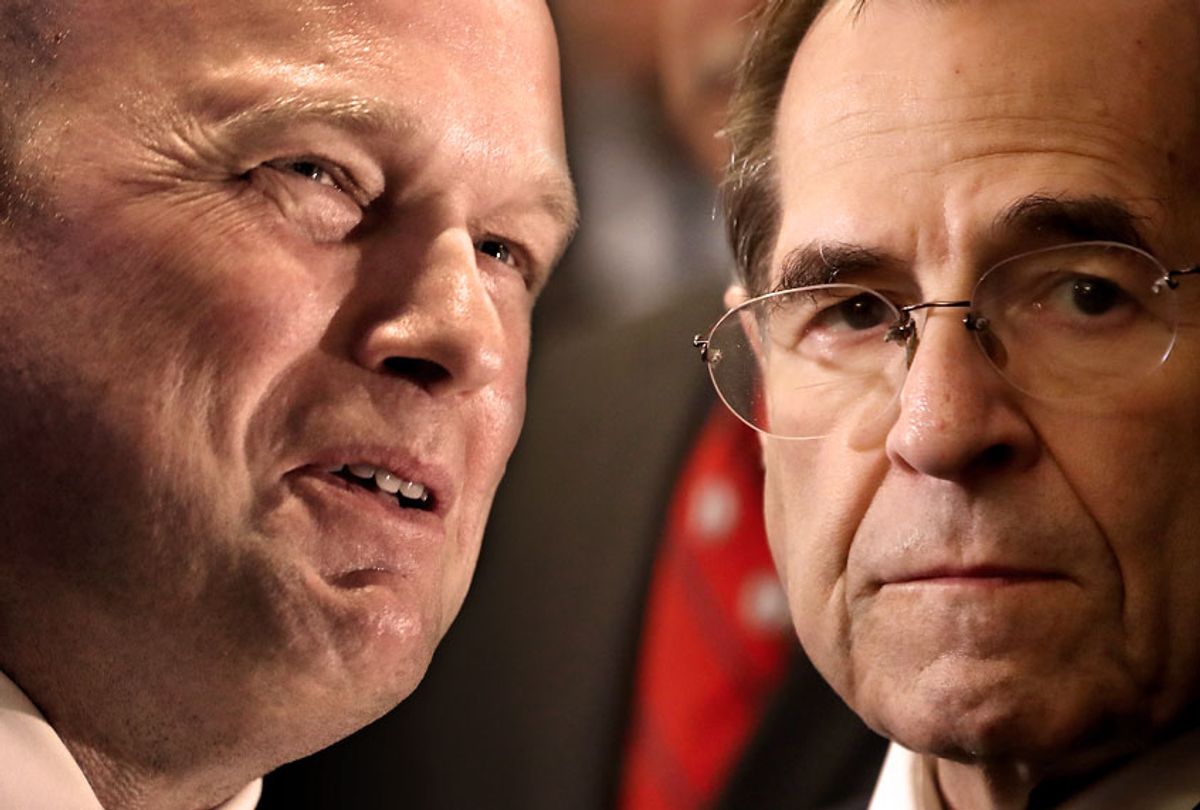 Nadler told reporters Wednesday that Whitaker “did not deny” that Trump called him to discuss the prosecution of his longtime attorney Michael Cohen and whether or not to fire federal prosecutors involved in the case. The closed-door meeting came after Nadler requested that Whitaker clarify the answers he gave at a public hearing last month when he refused to discuss his conversations with Trump about the Cohen case. Whitaker has since left the Justice Department.

Nadler said that Whitaker “did not deny” that he spoke with Trump about Cohen’s case and “whether to fire one or more U.S. attorneys.”

Nadler said Whitaker was also involved in conversations about Trump-appointed U.S. Attorney Geoffrey Berman, who recused himself from the Cohen case, and “whether the Southern District [of New York] went too far in pursuing the campaign finance case in which the president was listed as Individual Number 1.”

Republicans quickly pushed back against Nadler’s claims. The only people at the meeting were Nadler, ranking member Rep. Doug Collins, R-Ga., lawyers for the Justice Department, and staffers for the two committee leaders.

Collins told The Hill that Whitaker “said he never talked with the president about Mr. Cohen at all and no conversation with the Southern District of New York either.”

“I think that is [Nadler’s] interpretation of what he said,” Collins said of the chairman’s remarks, adding that “Mr. Whitaker said he did not have conversations with the president about Cohen. ... If Mr. Nadler chooses to say by absence of what he didn’t say and that is how he is interpreting that, then Mr. Nadler will have to answer to that.”

Two Republican lawyers who were in the room told Politico that no one from the Trump administration discussed Berman’s recusal and that Whitaker never had discussions with the Southern District of New York. But a New York Times report from February cited numerous sources who claimed that Whitaker asked Berman if he could lead the investigation into hush money payments made by Trump to cover up his alleged affairs, despite Berman’s earlier recusal.

Nadler told reporters that Whitaker “would not say no” when asked about the report. Republican lawyers said Whitaker said he “did not remember” and “couldn’t say with certainty one way or the other.”

A Justice Department lawyer who was in the room also disputed Nadler’s account to The Daily Beast.

“We disagree with Representative Nadler’s characterization of the conversation,” the official said. "Consistent with his prior testimony, Mr. Whitaker said that he couldn’t discuss private conversations with the president … and that the president never directed him to do anything to affect that investigation.”

Nadler said that the committee would “analyze the new revelations and see where they lead.”

Rep. Ted Lieu, D-Calif., who asked Whitaker during his public hearing whether he had discussed the Southern District investigations with the president, wrote on Twitter that he believes Whitaker lied to Congress.

“My view is that former Deputy AG Matthew Whitaker lied to me, or at the very least seriously misled the [House Judiciary] Committee, when he said ‘No’ to my direct question,” Lieu said.