Senate Republicans stand up to Trump? Hardly — they capitulated to the right

It may appear that GOP senators stood up against Trump this week. In reality, they're trying to save their skins 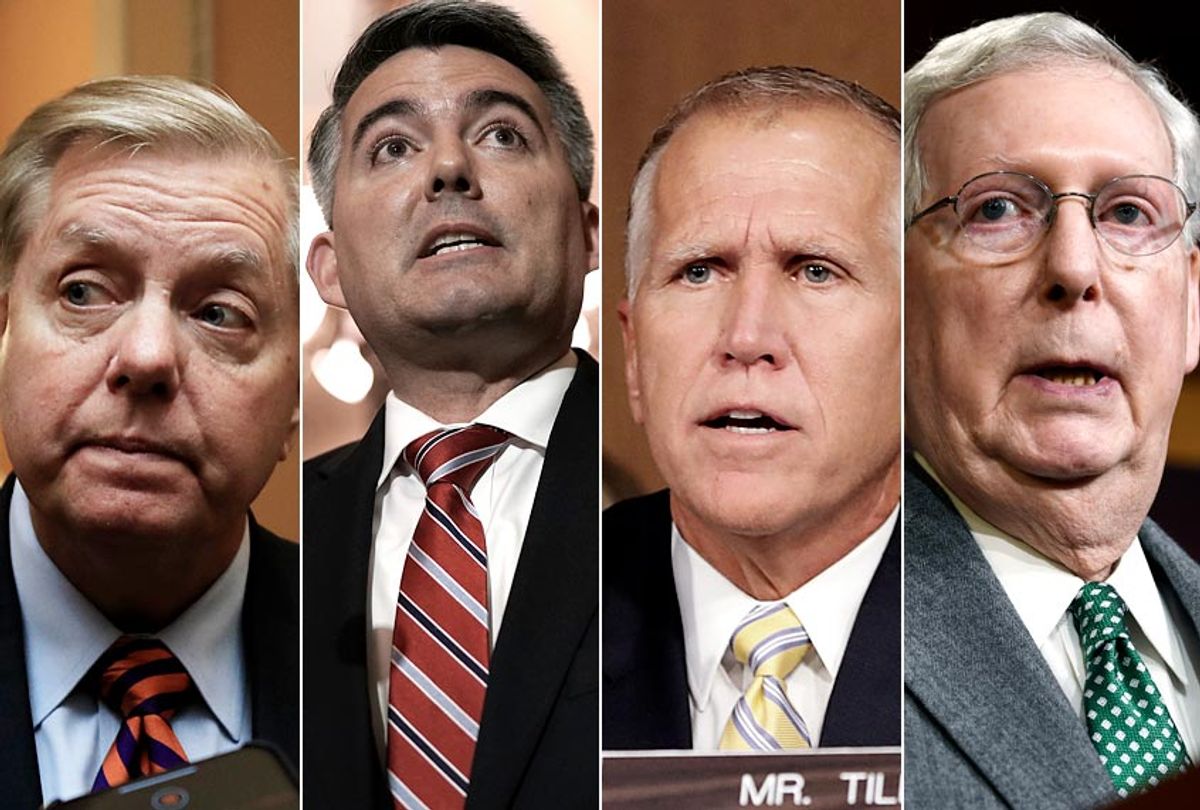 Don’t be fooled. There has been no major insurrection in the ranks of the Republican Party.  Despite what has been widely described as a major defection of a dozen GOP senators over the president’s signature campaign issue this week, Donald Trump still maintains a firm grip over nearly every elected GOP official.

Trump lost the midterm elections after hyping the dangers of a migrant caravan to push for a border wall -- the one he originally promised would be paid for by Mexico. He then lost the shutdown showdown against congressional Democrats over funding the wall, eventually agreeing to reopen the federal government without a dollar in wall money as his approval ratings suffered. And now the president has lost a vote on an emergency declaration meant to circumvent Congress’ disapproval of his requested wall funding.

The Republican-controlled Senate didn't want to have to vote on the resolution. But once House Speaker Nancy Pelosi successfully passed it in the House with the votes of a dozen Republicans, parliamentary rules left Senate Majority Leader Mitch McConnell no choice. He had to bring it to the floor, knowing it could prove to be an embarrassing defeat for Trump.

Trump’s wall is a loser — by a large margin — in nearly every poll of U.S. voters. Yet only one of the 20 Republican senators representing swing states and up for re-election next year voted against the president’s power move to build his pet project. Of the seven Republican senators facing particularly competitive races in 2020, as designated by the Cook Political Report, six voted with Trump.

More than any other vote during the Trump era, Thursday’s resolution to undo Trump’s declaration of a national emergency crystallizes how congressional Republicans have little choice but to cater to the conservative base of an increasingly conservative GOP — even in states that have recently elected Democrats for statewide office.

A national Quinnipiac University poll, released March 6, found that 66 percent of voters disapproved of Trump’s use of emergency powers to fund a border wall. But a different survey taken a few days later by Morning Consult found that seven in 10 Republican voters said they would be more likely to vote for senators or representatives who supported Trump’s declaration.

Among Republican voters in the Morning Consult poll, 78 percent said that support or opposition for Trump’s national emergency declaration would sway their vote one way or another. As pollsters explained, that figure is greater than the 61 percent of Republican respondents who said the same for the GOP’s plan to repeal and replace the Affordable Care Act in May 2017 and the 64 percent who said the same of the Republican tax bill in December 2017.

Although Trump carried North Carolina easily in 2016, he has since seen his approval rating in that state drop by 18 points. Perhaps that precipitous drop, as well as a recent statewide poll showing opposition and support for the wall dead even, drove Sen. Thom Tillis to speak out against Trump’s declaration.

“There is no intellectual honesty in now turning around and arguing that there’s an imaginary asterisk attached to executive overreach — that it’s acceptable for my party but not thy party,” Tillis wrote in a Feb. 25 op-ed in the Washington Post. “It is my responsibility to be a steward of the Article I branch, to preserve the separation of powers and to curb the kind of executive overreach that Congress has allowed to fester for the better part of the past century. I stood by that principle during the Obama administration, and I stand by it now.”

But Tillis voted with Trump on Thursday, as he has done 94 percent of the time. The senator simply said of his capitulation: “A lot has changed over the last three weeks.”

What had actually changed? The spread of fear, no doubt, and a creeping realization that the path to re-election must first run through a Republican primary.

After Tillis spoke out against Trump’s power move, North Carolina Republicans made overt threats against him and called for a primary challenge. House Freedom Caucus member Rep. Mark Walker of North Carolina told the Hill that a recent poll he conducted found that 72 percent of GOP voters in the Tar Heel State wanted their next senator to focus on advancing the Trump agenda over fighting for local priorities, like protecting disaster aid and military construction funding.

“North Carolina Republican primary voters have made their voices clear. They stand with the president. Our senators should as well,” he explained.

Similar threats may explain why Sen. Cory Gardner of Colorado avoided making public his stance on Trump’s declaration for more than a month. That state, represented by Democratic Attorney General Phil Weiser, is one of 20 suing Trump in an attempt to stop the president’s move. But after voting to uphold Trump’s emergency declaration, Gardner claimed on Thursday that the president had “clear legal authority.”

“It should never have come to this, but in the absence of congressional action, the president did what Nancy Pelosi and Chuck Schumer refused to do,” Gardner said after voting with Trump.

Like Tillis, Gardner had previously argued that immigration and border wall funding are the purview of the legislative branch. “Congress is most appropriately situated to fund border security,” Gardner said in a Feb. 14 statement.

Even representing a state won by Hillary Clinton and holding a Senate seat that is one of the Democrats' top targets heading into the 2020 election cycle, Gardner still votes with Trump more than 90 percent of the time, according to FiveThirtyEight. His vote on Thursday appeared to cement his status as a White House flunky, and led the Denver Post editorial board to declare its endorsement of him a “mistake.” But as a recent poll of Colorado Republicans makes clear, Gardner’s decision to align strongly with Trump in a blue state is not a mistake, but rather a survival strategy.

A February poll from Colorado firm Magellan Strategies found that 88 percent of GOP voters in the state supported Trump’s proposal to build a border wall. Furthermore, 48 percent of likely Republican primary voters in Colorado named immigration as a top priority, including among every single voter subgroup in the survey.

Republican pollster David Flaherty characterized the results of the recent poll of the state’s GOP faithful as detecting “no sign of weakness for the president.”

The bottom line is that Donald Trump can do no wrong in the eyes of Republicans. It is very likely that Republicans will approve of the job he is doing regardless of any setbacks or obstacles that may arise in implementing his policies now and through 2020.

He is giving Republican voters what they want, and they love him for it.

They believe he is keeping his campaign promises of fighting illegal immigration, improving the economy, creating jobs and not acting like a typical politician. Many respondents express a loyalty toward him because they believe he sincerely cares about all Americans, rich or poor, white or minority, and that he is fighting for them personally.

That dynamic likely explains why, in addition to Tillis and Gardner, Martha McSally of Arizona, Joni Ernst of Iowa, David Perdue of Georgia and John Cornyn of Texas all voted to support Trump’s power play. All are expected to face competitive challenges next year, and Democratic strategists likely believe they can defeat at least two of the four. But all those senators appear to be more afraid of their own voters than of the general electorate.