Understanding loneliness in older adults — and tailoring a solution 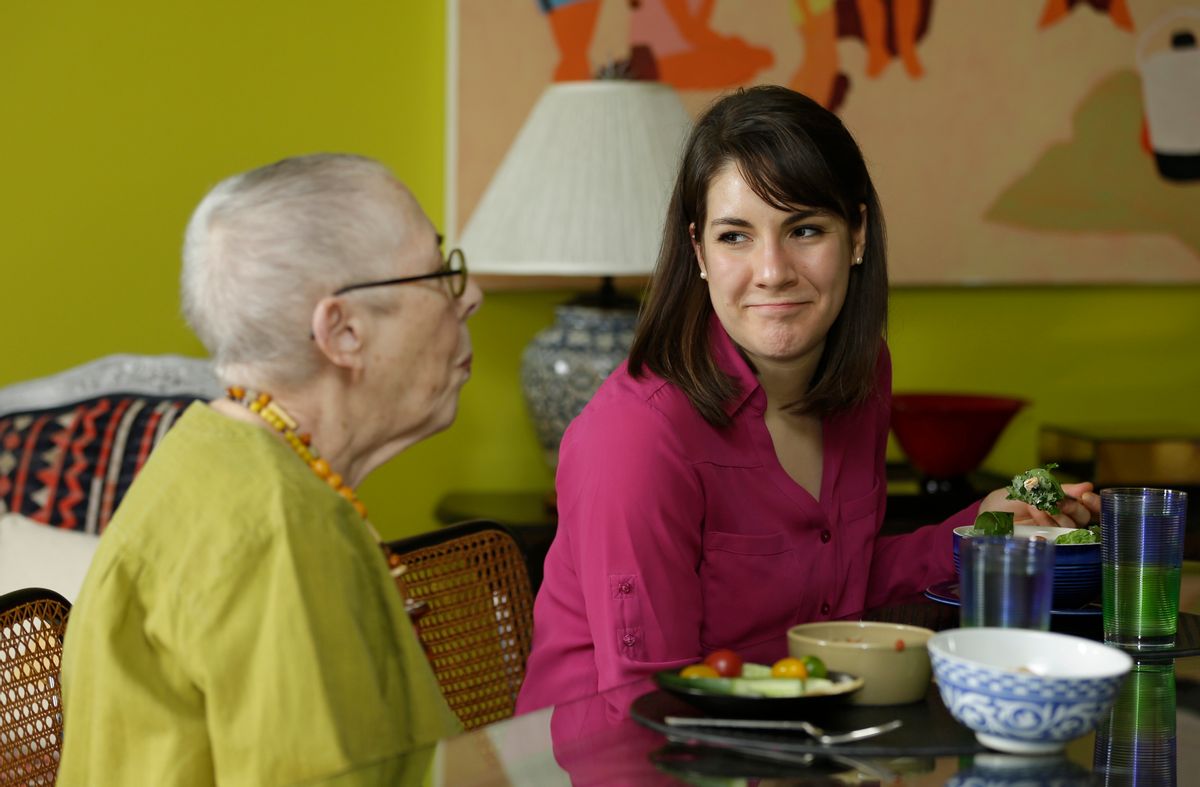 In this Friday, Feb. 17, 2017 photo, Laura Berick, left, a retired art dealer, has lunch with Justine Myers at Berick's home at Judson Manor, in Cleveland. In a research project, graduate-level students live among residents of the Judson Manor retirement home. The study looks at the impact of isolation and loneliness, aging and stereotypes of retirees by students and vice versa. Myers is an artist-in-residence at Judson Park. She is an Oberlin College graduate student studying music. (AP Photo/Tony Dejak) (AP)
--

For years, Dr. Linda Fried offered older patients who complained of being lonely what seemed to be sensible guidance. “Go out and find something that matters to you,” she would say.

But her well-meant advice didn’t work most of the time. What patients really wanted were close relationships with people they care about, satisfying social roles and a sense that their lives have value. And this wasn’t easy to find.

We need “new societal institutions that bring meaning and purpose” to older adults’ lives, Fried recently told a committee of the National Academies of Sciences investigating loneliness and social isolation among older adults. (Fried is a geriatrician and dean of the Mailman School of Public Health at Columbia University.)

The committee’s deliberations come amid growing interest in the topic. Four surveys (by Cigna, AARP, the Kaiser Family Foundation and the University of Michigan) have examined the extent of loneliness and social isolation in older adults in the past year. And health insurers, health care systems, senior housing operators and social service agencies are launching or expanding initiatives. (Kaiser Health News is an editorially independent program of the Kaiser Family Foundation.)

Notably, Anthem Inc. is planning a national rollout to Medicare Advantage plans of a program addressing loneliness developed by its subsidiary CareMore Health, according to Robin Caruso, CareMore’s chief togetherness officer. UnitedHealthcare is making health navigators available to Medicare Advantage members at risk for social isolation. And Kaiser Permanente is starting a pilot program that will refer lonely or isolated older adults in its Northwest region to community services, with plans to eventually bring it to other regions, according to Lucy Savitz, vice president of health research at Kaiser Permanente Northwest. (KHN is not affiliated with Kaiser Permanente.)

The effectiveness of these programs and others remains to be seen. Few have been rigorously evaluated, and many assume increased social interaction will go a long way toward alleviating older adults’ distress at not having meaningful relationships. But that isn’t necessarily the case.

“Assuaging loneliness is not just about having random human contact; it’s about the quality of that contact and who you’re having contact with,” said Dr. Vyjeyanthi Periyakoil, an associate professor of medicine at Stanford University School of Medicine.

A one-size-fits-all approach won’t work for older adults, she and other experts agreed. Instead, varied approaches that recognize the different degrees, types and root causes of loneliness are needed.

Degrees of loneliness. The headlines are alarming: Between 33 and 43 percent of older Americans are lonely, they proclaim. But those figures combine two groups: people who are sometimes lonely and those who are always lonely.

The distinction matters because people who are sometimes lonely don’t necessarily stay that way; they can move in and out of this state. And the potential health impact of loneliness — a higher risk of heart disease, dementia, immune dysfunction, functional impairment and early death — depends on its severity.

The number of people in the highest risk category is relatively small, as it turns out. When AARP asked adults who participated in its survey last year “How often do you feel lonely or isolated from those around you?” 4 percent said “always,” while 27 percent said “sometimes.” In the University of Michigan’s just-published survey on loneliness and social isolation, 8 percent of older adults (ages 50-80) said they often lacked companionship (a proxy for loneliness), while 26 percent said this was sometimes the case.

“If you compare loneliness to a toxin and ask ‘How much exposure is dangerous, at what dose and over what period of time?’ the truth is we don’t really know yet,” Periyakoil said.

Why it matters: Loneliness isn’t always negative, and seniors shouldn’t panic if they sometimes feel this way. Often, loneliness motivates people to find a way to connect with others, strengthening social bonds. More often than not, it’s inspired by circumstances that people adjust to over time, such as the death of a spouse, close family member or friend; a serious illness or injury; or a change in living situation.

Some experts add another category: “existential loneliness,” or the sense that life lacks meaning or purpose.

Dr. Carla Perissinotto, associate chief for geriatrics clinical programs at the University of California-San Francisco, has been thinking about the different types of loneliness recently because of her 75-year-old mother, Gloria. Widowed in September, then forced to stay home for three months after hip surgery, Gloria became profoundly lonely.

“If I were a clinician and said to my mother, ‘Go to a senior center,’ that wouldn’t get at the core underlying issues: my mother’s grief and her feeling, since she’s not a native to this country, that she’s not welcome here, given the political situation,” Perissinotto said.

What’s helped Gloria is “talking about and giving voice to what she’s experiencing,” Perissinotto continued. Also, friends, former co-workers, family members and some of Perissinotto’s high school buddies have rallied around Gloria. “She feels that she’s a valuable part of her community, and that’s what’s missing for so many people,” Perissinotto said.

“Look at the older people around you who’ve had a major life transition: a death, the diagnosis of a serious illness, a financial setback, a surgery putting them at risk,” she recommended. “Think about what you can offer as a friend or a colleague to help them feel valued.”

Why it matters: Listening to older adults and learning about the type of loneliness they’re experiencing is important before trying to intervene. “We need to understand what’s driving someone’s loneliness situation before suggesting options,” Perissinotto said.

In a review of interventions to reduce loneliness, researchers from the University of Chicago note that interventions that address what they call “maladaptive social cognition” — distrust of other people, negativity and the expectation of rejection — are generally more effective than those that teach social skills or promote social interactions. Cognitive behavior therapy, which teaches people to recognize and question their assumptions, is often recommended.

Relationships that have become disappointing are another common cause of loneliness. This could be a spouse who’s become inattentive over time or adult children or friends who live at a distance and are rarely in touch.

Other contributors to loneliness are easier to address. A few examples: Someone who’s lost a sense of being meaningfully connected to other people because of hearing loss — the most common type of disability among older adults — can be encouraged to use a hearing aid. Someone who can’t drive anymore and has stopped getting out of the house can get assistance with transportation. Or someone who’s lost a sibling or a spouse can be directed to a bereavement program.

“We have to be very strategic about efforts to help people, what it is they need and what we’re trying to accomplish,” Holt-Lunstad said. “We can’t just throw programs at people and hope that something is better than nothing.”

She recommends that older adults take mental stock of the extent to which they feel lonely or socially isolated. Am I feeling left out? To what extent are my relationships supportive? Then, they should consider what underlies any problems. Why don’t I get together with friends? Why have I lost touch with people I once spoke with?

“When you identify these factors, then you can think about the most appropriate strategies to relieve your discomfort and handle any obstacles that are getting in the way,” Holt-Lunstad said.