What makes humans unique among animals

Dolphins have cultural transmission; many animals learn. But only humans teach 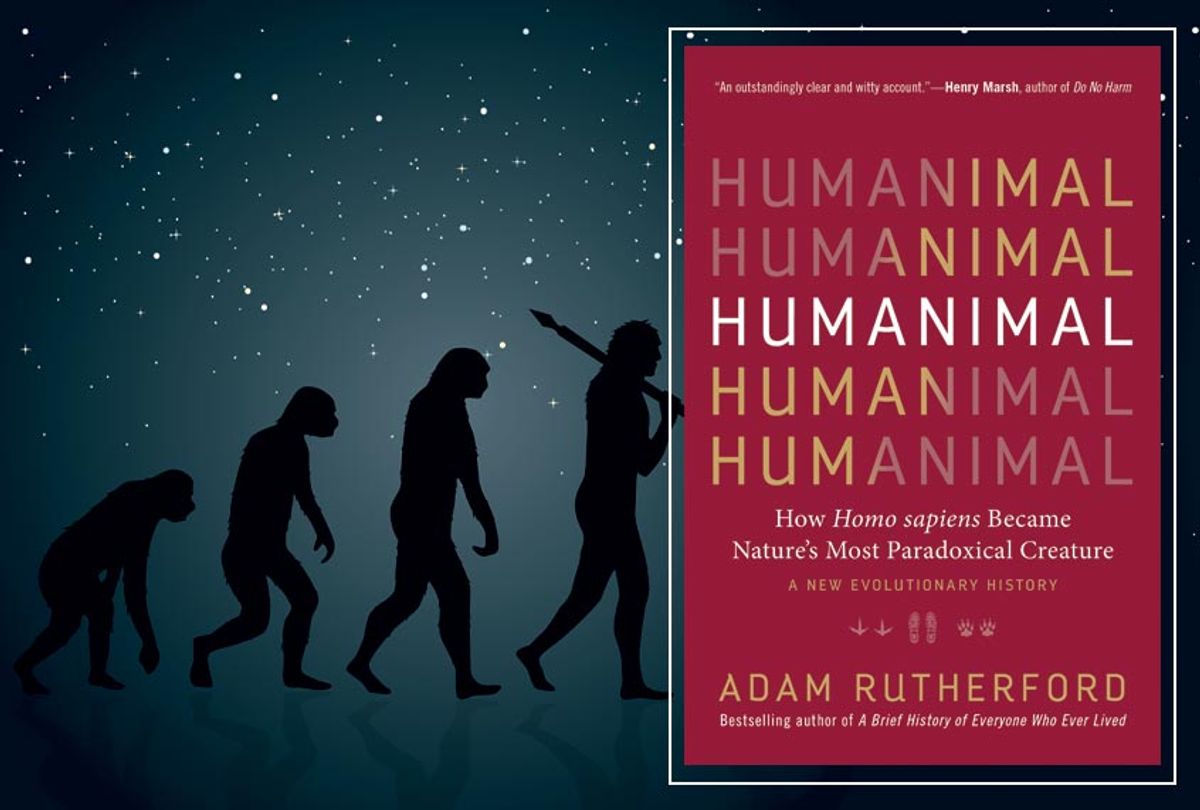 I’ve written quite a lot of these words in an Italian café near where I live. It’s early on a Friday evening right now, and it’s buzzing. I’m the slightly odd man sitting alone with his fourth coffee and a heap of books. It strikes me that restaurants are wonderful places for observing the full package of human evolution. There’s a school nearby and there are teachers and pupils in here. It’s very family friendly, and there’s a baby being cooed at by someone I guess is a grandparent, but might be unrelated. People fork farmed food cooked by fire into their incredibly complex mouths using forged metal tools. A couple on a date may well have more fun to come later tonight. The manager oversees the chefs in the kitchen, who interact with the waiting staff, who interact with the customers. And everyone is talking.

Next time you are in a café, take a moment to watch what is really happening. Every transaction is an exchange of information. All those dynamics are the outcome of a biological and cultural evolution unique to this ape. We exhibit sexual preferences and activities that are diverse and by choice, yet comparable to behav­iors seen in other animals. We have separated sex from reproduc­tion with a boundary that is rarely breached. We’ve taken technology to levels of sophistication indistinguishable from magic.

Our brains have grown and funded these abilities and behaviors that sometimes differ by degree, sometimes by kind, even if they may look much the same. Our minds have expanded beyond our brains, at least metaphorically, because humans are a social crea­ture that transmits ideas through time as well as space, and very few animals do that as effectively. Where we stand apart most sig­nificantly is in cultural accumulation and transmission. Many ani­mals learn. Only humans teach.

There is cultural transmission of ideas in a few other species: tool use in females of a pod of tech-savvy dolphins in Australia; maybe the knowledge of who is scary and who is not to a Caledonian crow. These are few and far between, and we will discover more examples in time. Humans do it all the time and have done for millions of years. Due to the nature of my work, I stand in front of thousands of people every year and tell them stuff that I have learned. I am related to almost none of them. We accumulate knowledge, and pass it on. That is what this book is, what all books are.

Here is a secret: I did none of the actual research that I have written about. I’ve never been to Indonesia and seen the hand sten­cils of our forebears; I’ve never sat in the Senegalese savannah looking at chimps patrolling a wildfire. I’ve never been to Shark Bay and witnessed dolphin cows wearing sponges on their beaks. I hope that one day I will. Some of you have, and scientists have, and they did this to satisfy their curiosity, and by proxy, ours. They wrote those things down and applied the accumulated knowledge of 10,000 years to check if it was right, and shared those ideas with others, also to check, so that humans would learn something that they didn’t know before. I read their work, all of the scientific papers referenced at the back of this book, and used my experience of teaching and learning to crunch those ideas, and try to synthe­size them into something new, and gestalt. I wrote them down, and my editors and a couple of scientists used their skill and experience to question my words and ideas, and knock them into shape to make it all easier for others to understand. The designers and type­setters put it together, and Alice Roberts drew on her knowledge and skill with pen and ink to draw some beautiful pictures. And all together, we made this thing you are holding, for no other reason than to share some ideas.

Every journey of every human is built upon thousands of years of accumulated knowledge, founded upon billions of years of evo­lution. Our culture is part of our biological evolution, and it is wrong to try to separate them. Our minds evolved because it was advantageous and appropriate to do so, and the selection of our cognitive faculties and our minds are only important in the context in which they evolved. Mutations in our genes provided a physio­logical change that set the template for speech, and the processing power to allow that speech to develop into complex communica­tion. That helped elevate our thought processes so that a mind with consciousness akin to our own today could be built out of the necessity of anticipating another mind’s thoughts. None of this happened in a flash, there was no spark, there was no one thing that set off this chain. Our minds evolved, and as we know, evolution is slow and messy and convoluted. A mind that can time travel and read others, speech, dexterity, fashion, the joy of sex, all are the result of a lumpy continuum, emergent properties underwritten by that force of evolution.

A living organism is an integrated system. Though that seem­ingly catastrophic fusion of two chromosomes actually set up the unlikely framework of the human genome, there is no single genetic change that made us Homo sapiens. Take a machine such as a car: it didn’t become a car with the addition of the gearbox, or the steer­ing wheel, or any other single part. All of the parts are together what makes it a car, some essential, some less so, but none defini­tional. You can lose a limb in an accident, or even possess an extra chromosome, and you are still a human. We are so much more complicated than motor vehicles, even though we have roughly the same number of genes as an average car has parts. More and more we are finding that genes do many things. There isn’t a gene for speech, though FOXP2 is clearly essential. There isn’t a gene for creativity, imagination, spear throwing, dexterity, consciousness, or even cultural transmission. There wasn’t a moment when we were not Homo sapiens before, and suddenly we were after one gene mutated. Our genomes are unique to us, and provide the evolved framework on which humanness could emerge.

In Christian cultures, we talk of the Fall, where humankind became sullied by shaking off the shackles of our creation. I don’t care for that story much. If anything, we fell upwards, slowly and incremen­tally, and away from the thoughtless brutality of nature. The Lord knows there’s plenty of wickedness in humans, and though we mostly reject the primal urges that we might have inherited from four billion years of indifferent evolution, the numbers are on the side of Hamlet’s angels. We almost never murder, we almost never rape, we create and teach all the time, and learn almost at the same rate.

The picture of how we came to be is only going to get more complicated as we continue to discover. I suspect that soon we will find more contemporary species of human who lived alongside us within the last 300,000 years, and that we will find more humans who bred with us in that time too. We should revel in this com­plexity and celebrate the fact that we alone are capable of under­standing it.

Evolution is blind and evolutionary progress is a misnomer; nat­ural selection carves and winnows according to the ever-changing status quo. Just like all living things, we struggle for existence, but we also try to ease the struggles of others.

We must, however, acknowledge, as it seems to me, that man with all his noble qualities, with sympathy which feels for the most debased, with benevolence which extends not only to other men but to the humblest living creature, with his god-like intellect which has penetrated into the movements and constitution of the solar system.

Charles Robert Darwin wrote those words in 1871. He is my hero, for better or worse, and though he was so very right about some of the most important ideas that anyone ever had, like all scientists, he was wrong about others. He was right about the evolutionary path­way of humans, and simultaneously he was woefully wrong about the evolution of women, whom he thought were intellectually infe­rior to men. At least, part of his incomparable legacy is that we now know this to be incorrect.

Nevertheless, with the use of the word “man” to mean “human,” Darwin draws The Descent of Man to a conclusion, writing, “with all these exalted powers—Man still bears in his bodily frame the indelible stamp of his lowly origin.”

Our genes and our bodies are not fundamentally different from those of our nearest cousins, ancestors or even our deep relatives. As for lowly origins, that is a matter of judgment. We are evolu­tion’s creatures, forged, carved and etched out of forces beyond our control, just like every living thing is. With those forces behind us, we took evolution’s work, and by teaching, we created ourselves, an animal that together became more than the sum of its parts.

Remember the alien naturalist come to Earth to study us. In Carl Sagan’s novel Contact, a real fictional alien intelligence does scrutinize humankind—they’ve been watching us for thousands of years. In that story, we send a scientist according to their instruc­tions, and upon meeting her, the alien speaks:

You’re an interesting species. An interesting mix. You’re capable of such beautiful dreams, and such horrible night­mares. You feel so lost, so cut off, so alone, only you are not. See, in all our searching, the only thing we’ve found that makes the emptiness bearable, is each other.

Life is continuous on Earth, endless forms most beautiful. We force discrete classifications upon that continuum to help us make sense of a planet bursting with life through eons. You sit some­where on that trajectory, unique in trying to figure out your place in all of this.

Adam Rutherford is a geneticist and the author of "A Brief History of Everyone Who Ever Lived: The Human Story Retold Through Our Genes."