Why won't Donald Trump talk about white nationalism? Because he enables and supports it

After another horrific massacre committed by a white supremacist, Trump sees a "small group" that's no big deal 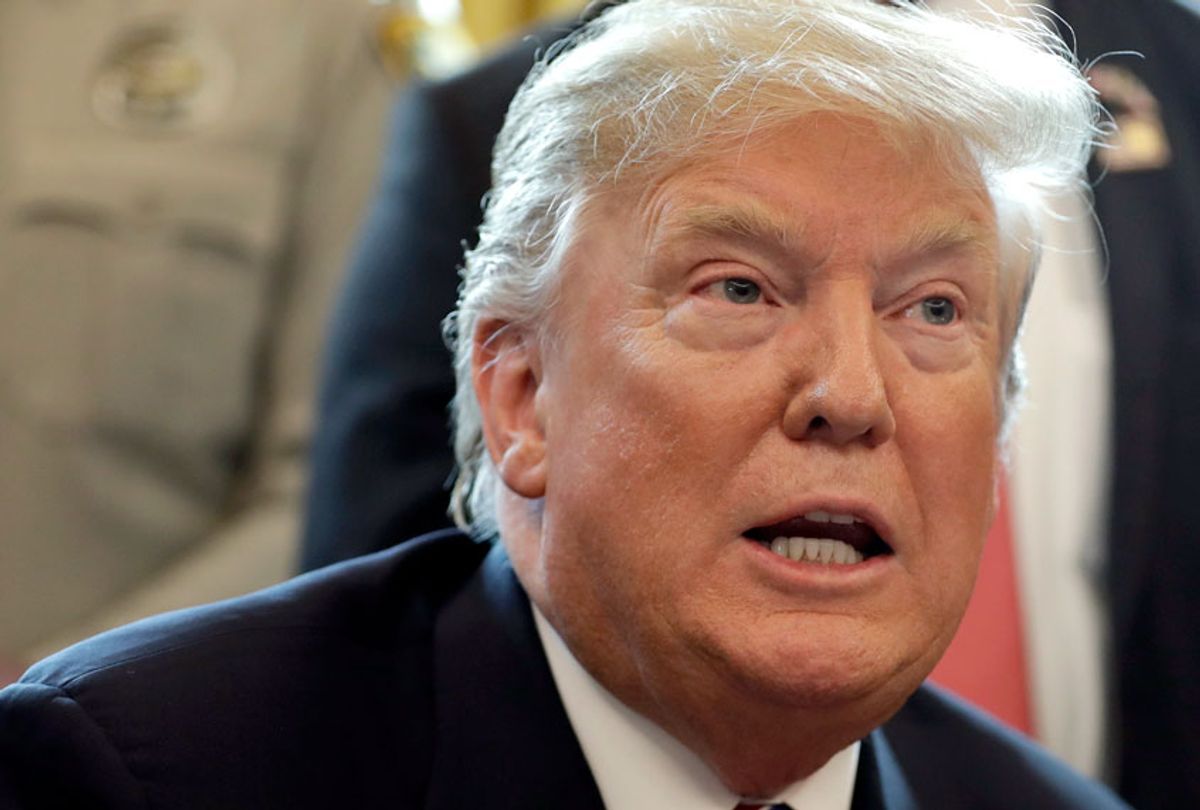 Last Thursday night I happened to be on Twitter when news of the New Zealand massacre hit. Not realizing the magnitude of the horror, I clicked on a link to a video of the shooter's livestream. When I realized what I was seeing, I quickly clicked away, but I'm afraid I won't ever be able to forget what I saw before I did. But the one thing I knew from the moment I saw the guns and heard the words, "Let's get this party started" was that this was a white supremacist terrorist. That macho, pseudo-warrior, "white power" swagger is all too familiar these days.

You've heard all the ghastly details of the massacre by now. And you've undoubtedly heard about the killer's manifesto, entitled "The Great Replacement," which he posted online before he began his murderous rampage. It's filled with white supremacist dogma and coy internet tropes designed to troll people who are unfamiliar with the jargon, while speaking to his mates in the racist online forums he frequented.

We've seen various forms of terrorism repeatedly in recent years. But only terrorist attacks committed by brown or black people, it seems, are worthy of anything more than a reluctant shrug and a few words about how some people "have problems" from the President of the United States. If the perpetrator is a Muslim, it's a different thing altogether.

When a young white man gunned down 10 fellow students in Roseburg, Oregon, in October 2015, Donald Trump was philosophical. He said:

Two months later, before anyone knew the details of the attack in San Bernardino, California, in which 14 people died, Trump immediately labeled it “radical Islamic terrorism,” saying, “I mean, you look at the names, you look at what’s happened. You tell me.”

Five days later, he called for a “total and complete shutdown of Muslims entering the country until we can figure out what the hell is going on.”

After the horrific June 2016 attack at the Pulse nightclub in Orlando, Trump infamously said that he appreciated the “congrats for being right on radical Islamic terrorism” and called for “toughness & vigilance," reiterating his call for a ban on all Muslims entering the country.

The next month an African-American man, whom the police chief called "delusional," shot five police officers in Dallas. Trump called it “a coordinated, premeditated assault on the men and women who keep us safe.”

Fast forward to October 2017, when a man ran his truck into a bike lane in lower Manhattan, killing eight people, Trump immediately called the perpetrator a "terrorist" and an "animal" and called for the death penalty. But the white man who killed 26 people in a Texas church in November 2017 had "mental health problems." After the unbelievable carnage at the Mandalay Bay Hotel in Las Vegas October 2017, when a white man fired more than 1,000 rounds down on concertgoers from the 32nd floor, killing 59 people and injuring hundreds more, Trump said he was a "sick and demented person."

Sadly, those are just a few examples of the mass casualties in America and around the world over the last few years. Some are obviously political and ideological in nature. Trump is of course correct that some are perpetrated by people with mental illness.  (The Las Vegas shooter's motives remain unclear, for instance.) But our president has a very specific way of organizing these horrific events in his mind. He has no problem calling Muslim extremists "terrorists." And he is more than willing to say that a mentally ill black man had premeditated and coordinated an assault. But he will not admit that white supremacist terrorism even exists.

He literally can't say the words. He issued a routine statement about thoughts and prayers in the wake of the Christchurch massacre. But when asked whether he viewed white nationalism as a rising threat worldwide, he replied:

I don’t really. I think it’s a small group of people that have very, very serious problems. I guess if you look at what happened in New Zealand, perhaps that’s the case. I don’t know enough about it yet.

First of all, he was definitely lying. By the time he was asked that question, everyone in the world knew that the Christchurch killer was a white nationalist. Needless to say, the president of the United States had been briefed on the fact that the shooter’s manifesto included admiration for him as “a symbol of renewed white identity and common purpose.” He always knows when his name is mentioned.

More importantly, Trump refused to acknowledge that in recent years, an international white identity movement has grown all over the world, including in the United States. In Europe, anti-Semitism and Islamophobia are the major motivating factor. American white supremacists take it to a whole other level, which is not unexpected considering our history of slavery and Jim Crow oppression. They are generally hostile to Muslims and Jews as well, of course, but they have equal antipathy toward African-Americans and Latinos. The American race war has a lot of diversity.

Considering the body count, Trump's continued unwillingness to admit that this movement exists, and to specifically denounce it, is an admission of his affinity. Indeed, in his statement on Friday when vetoing the congressional resolution that would have overturned his national emergency declaration, only hours after the shootings, he echoed the themes of the "Great Replacement" manifesto, which the Christchurch killer wrote “to show the invaders that our lands will never be their lands.”

This invader language is apparently common among white nationalists. The Tree of Life synagogue shooter used similar language about the so-called migrant caravan, claiming that a Jewish refugee organization was bringing in "invaders that kill our people." Just days later, Trump was tweeting out a racist propaganda ad:

Most politicians would have at least rhetorically tried to separate themselves from such associations. But as we witnessed after Charlottesville and many times since then, Trump finds it impossible to chastise these people. But then he has always said that his only criterion for liking people is whether or not they like him. And white supremacists like him a lot:

In keeping with those earlier instances of being totally inappropriate in the wake of a white supremacist terrorist attack, Trump went on a Twitter tantrum on Sunday, angry that Fox News had apparently suspended Judge Jeanine Pirro for making anti-Islamic comments. He demanded that they defend her and Tucker Carlson, whose South African scaremongering he and David Duke found so compelling. He can't help himself.

There can be no doubt that there is a growing international white identity movement. And we can no longer ignore the fact that by failing even to admit that such a movement exists, the president of the United States is empowering and enabling it. In using the rhetoric of hate, he has aligned himself with it.