Reparations are overdue: "Confronting the truth" about slavery means paying for it

"Not if it means just a cash payment or a check," says Bernie Sanders. Why on earth not? 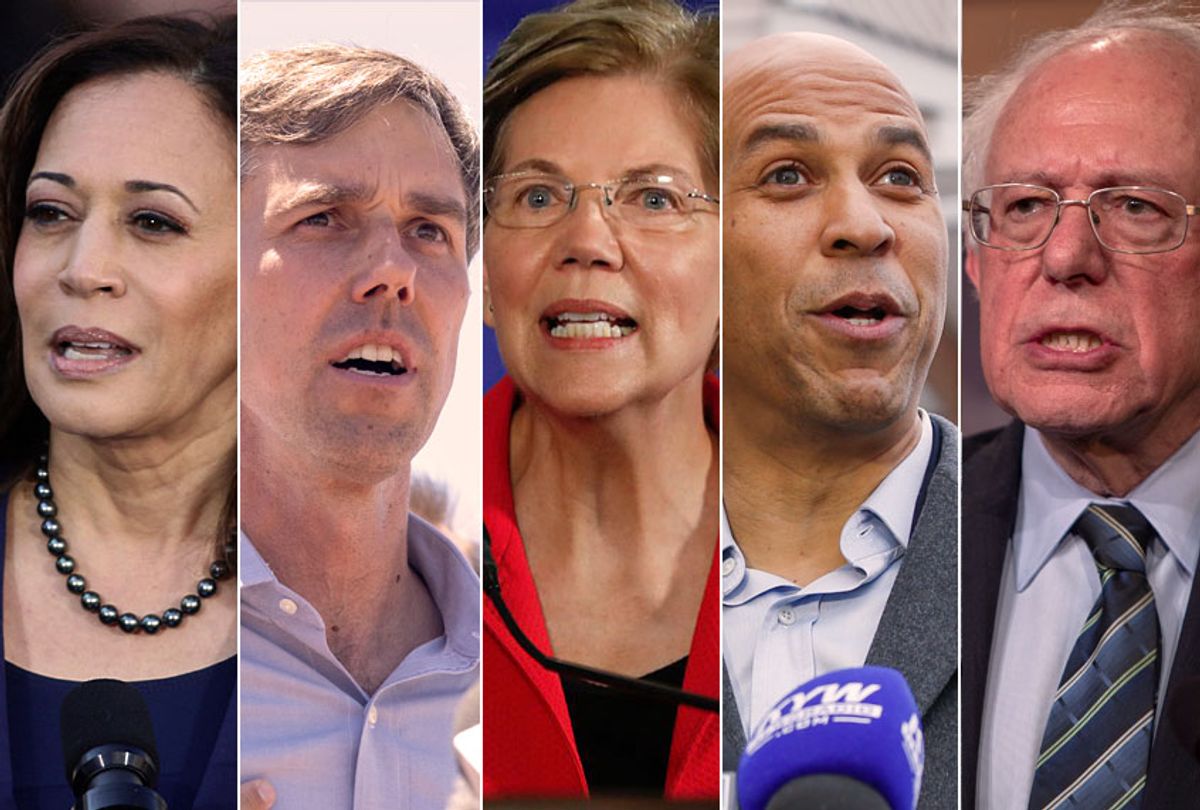 The topic of slavery reparations is finally trending again, nearly five years after Ta-Nehisi Coates' essay in The Atlantic making the case. Even 2020 presidential candidates are talking about it — or displaying creative ways to avoid the issue. But before we talk about why reparations are necessary, let’s knock out some light housekeeping.

What are slavery reparations? Reparations can be defined as the act of repairing something, or the making of amends — financially or otherwise — for a wrong done to another. Slavery reparations would be the U.S. government paying money to the descendants of African slaves.

Slavery was a long time ago, some might say, so why pay now? Skin color has prohibited African Americans from being complete Americans since our ancestors entered Jamestown back in 1619. African Americans have and continue to suffer from the long-term effects of slavery, more than 150 years after the 13th Amendment became law. The hundreds of years of bondage our ancestors endured before 1865 directly contributed to our collective inability to establish generational wealth, while the unfair housing practices that followed continue to result in underfunded schools, which lead to our children not being educated properly, which leads to the lopsided incarcerated rate, higher infant mortality rates, food deserts, police targeting, and health care discrepancies.

I see politicians on the left and the right bouncing around in the lead-up to the 2020 election, clenching their flags, screaming how America is the greatest country in the world, ignoring the fact that we don’t rank number one in healthcare — that’s the United Kingdom — or education, (Canada) or that you might have a better chance at climbing the economic ladder in Denmark. But still America is branded the best, and despite its shortcomings is recognized as the super power, especially for the influence  it gained at such a young age.

How did America gain so much power in such a little amount of time? Tobacco was the cash crop in the 18th century, which created a strong demand for an enslaved workforce; however, picking the plant was labor intensive and eventually not worth the money; tobacco prices dropped and the monetary value of enslaved labor declined. Northerners and southern planters alike started imagining a country without slaves. Near the turn of the century, the textile industry started to boom but American planters couldn’t keep up with cotton orders; picking it and separating the seeds so that it could be made into fabric produced more work than running a tobacco farm. The average slave could only produce about a pound a day. This all changed in 1793 when Eli Whitney invented the cotton gin, a contraption that quickly removes the cotton from the seeds.

Remember how I mentioned failing schools above? Here is a perfect example: I learned in middle school and high school that Eli Whitney was a freed slave whose cotton gin invention helped end slavery because the machine could out-work field hands. In reality, Whitney was a white dude and his cotton gin extended slavery because it enabled plantations to scale up as workers could pick cotton more efficiently, taking an individual's production from one to 50 pounds per day. Plantations in the south, with their perfect cotton-growing soil and climate, bought more slaves, started new farms, and made a ton of money from the northern states and Europe. And any silly ides of emancipation flew out of the window.

This is why America rose to power so quickly: free labor. The United States has a responsibility to pay that long overdue bill.

“I’d take my check, PayPal, Ca$h App, or you can pay in the old-fashioned way,” is what I told my barber.

“Reparations is scary,” he replied. “Black people will just blow all of that money.”

He's not alone; the assumption that black people would immediately spend all of their reparations money is a widespread and racist idea. Of course all African Americans aren’t gung-ho to spend every dime they ever had, and other races and ethnic groups like to spend money as well. (And even if it was 100 percent true, wouldn’t that be a pleasant boom for our economy, allowing businesses to flourish, hire more people, and create more opportunity?)

Another poor argument I've heard came from a black talking head pushing back at the idea of cash payments. “We don’t need reparations in the form of checks," he said. "Give us a free education!”

First of all, I feel like we can have both. But beyond that: who is he to say what I need? Did someone elect this guy to be king of the black people? No one, especially not me, has a right to comment on what another person needs, as I don’t know what’s happening in their life. What if they've already received a free education, but are still struggling due to unfair wages, unfair hiring practices, or because they have to carry a number of family members who weren’t as fortunate? Are you telling me that their personal intellect and academic accomplishments mean that they achieved equality in racist America, thus making them exempt from receiving anything? Please.

And though I feel it may not happen in my lifetime, I still enjoy having these tough conversations — and making white people uncomfortable about paying slave reparation taxes so that I can buy more Nikes — and seeing politicians squirm at and around the question.

"I think reparations . . . yeah. I think that the word, the term reparations, it means different things to different people,” California Senator and presidential candidate Kamala Harris said on NPR recently. “But what I mean by it is that we need to study the effects of generations of discrimination and institutional racism and determine what can be done, in terms of intervention, to correct course.”

I disagree. I think enough studies have been done. We have been living with this systemic inequality for generations and have learned to survive in high-level crisis mode. Senator Cory Booker, who is also running, has been quiet on the topic except for his baby bonds program that help create savings accounts for poor children; both Harris and Booker know that a black candidate supporting reparations, or even talking about how America constantly lusts over its hardworking, innovation-based rise to power while ignoring the role of free labor, is political suicide.

Senator Bernie Sanders also doesn’t get it, as he said that he would not support a “cash payment or check” to African American families — as if reparations payments are the equivalent to doling out unearned money for nothing. It’s important to mention that Sanders did support reparations for Jewish victims when he signed off on the Holocaust Rail Justice Act, which allowed $60 million to be paid to American Holocaust survivors and victims' families.

Sanders cleared up his stance on reparations yesterday in an NPR interview with Rachel Martin, and it still doesn't go far enough:

Martin: "Would you support a reparations plan designed specifically to narrow that gap?"

Sanders: "Yeah — but not if it means just a cash payment or a check to families. I would not support that. ... I am sympathetic to an idea brought forth by Congressman Jim Clyburn. ... And he has what he calls a 10-20-30 plan, which says that 10 percent of federal resources should go to communities that have had 20 percent levels of poverty for 30 years. In other words, the most distressed communities in America...."

Martin: "But is there something special unique and exceptional that needs to happen when we're talking about the sin of slavery?"

Sanders: "Well, you're right. The horrors of slavery all are horrors that are impacting African-Americans today. And it must be addressed. But I think if you're looking at the most distressed communities in this country, which is what Rep. Clyburn is talking about, unfortunately, they are often African-American communities, often Latino communities, sometimes white communities...."

Martin: "I'm sorry to interrupt you, but Ta-Nehisi Coates, who has kind of claimed credit for the current intellectual movement behind reparations, has called for a national reckoning — that it doesn't matter if the policies in practice actually do what you're talking about, there needs to be an emotional awakening."

Sanders: "I think that's a very good point. I think that many of us, obviously Caucasians, are not fully aware of the horrific impact not only impact, but it's almost the unspeakable reality of what slavery did to this country."

Like Castro, Massachusetts Senator and presidential candidate Elizabeth Warren wants to start a commission.  “I love the idea of this congressional commission,” Warren said to a crowd at  Jackson State University. “I believe it’s time to start the national, full-blown conversation about reparations.”

Sen. Amy Klobuchar is also against putting money directly into the hands of black people, telling Meet the Press, "It doesn’t have to be a direct pay for each person."

“But what we can do is, in those communities, acknowledge what happened," Klobuchar continued. "And that means better education. That means looking at for our whole economy: community college, one-year degrees, minimum wage, childcare, making sure that we have that shared dream of opportunity for all Americans.”

I wonder if Klobuchar knows that whether it's been acknowledged or not, we already know what happened?

Beto O'Rourke doesn’t support reparations but feels that “it is important to confront the truth about how black people have been treated in the U.S.” Again with confronting the obvious truths. To Beto, as well as to Sen. Kirsten Gillibrand, John Delaney,  John Hickenlooper,  Washington Gov. Jay Inslee and every other presidential candidate with no plan or a B.S. apology,  I'd say sure, buddy: take that to the bank and try to deposit it. The work from our ancestors equalled currency. Your sorries do not.

It's important to honor serious attempts on righting this wrong. Marianne Williamson, the spiritual adviser to Oprah who's running for president, wants to allocate $100 billion to go to slavery descendants throughout a decade, which is cool, though I think we need more. Tulsi Gabbard , presidential candidate and Democratic Representative from Hawaii, co-sponsored Reparations Legislation, which is also a step in the right direction.

Entrepreneur Andrew Yang, who has just met the qualifications to appear on stage at the first Democratic debate, wants to pay every American a universal basic income of $1,000 a month.

That’s a true way for Yang to engage everyone. However, it’s still not fair to the ancestors of the people who suffered under slavery. It’s funny how everyone acts like they want justice until it’s actually time to do what’s right. I can’t speak for everyone, but I’m personally sick of fake apologies, double talk, and campaign rhetoric.

Keep all that, and send a check.