Peele's sophomore effort isn't as game-changing as "Get Out," but it skillfully taps into primordial human fears 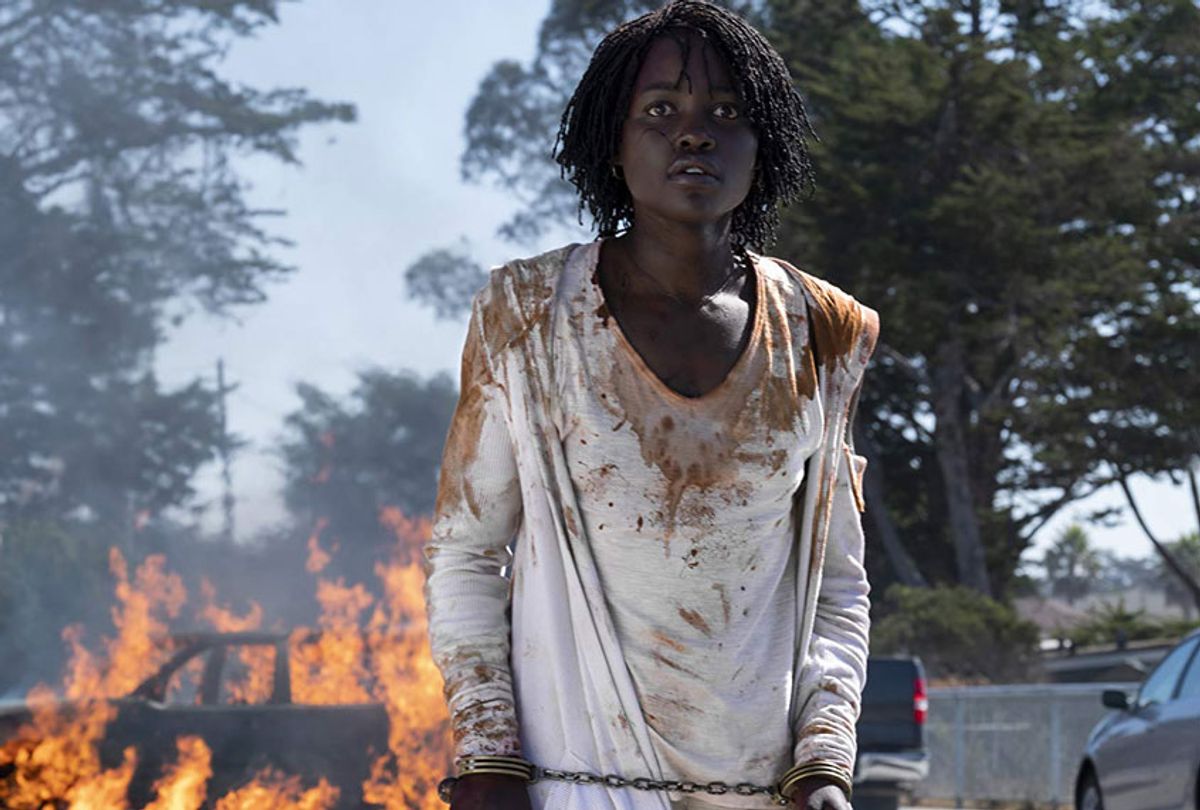 Lupita Nyong'o in "Us" (Universal Pictures)
--

Jordan Peele's new movie "Us" is, at its heart, a remake — the best kind of remake. While bad remakes cynically retell a famous story with few or no variations, or make changes that ruin the core themes rather than enhance them, this one takes a smaller story and expands upon it. The result is a disturbing, effectively creepy horror movie that works where it most needs to, even though it doesn't quite transcend its genre in the manner of Peele's previous horror film "Get Out."

Before there was "Get Out," though — back in 1960, more than half a century before either that film or "Us" hit theaters — there was an episode of "The Twilight Zone" called "Mirror Image," written by series creator Rod Serling and directed by John Brahm. As Peele told "Rolling Stone" magazine in January, the episode possessed "terrifying, beautiful, really elegant storytelling" and inspired him to make this movie because "it opens up a world. It opens up your imagination." The premise was simple: A woman named Millicent Barnes (Vera Miles) is waiting at a bus station in upstate New York when it gradually dawns on her that she is being stalked by a doppelgänger. She intuits that her double comes from a parallel dimension and needs to eliminate her so that it can take over her life.

"Us" derives its horror from the same concept — evil doubles from another world trying to take over life in this one — but does many things that a classic "Twilight Zone" episode could not, including expanding the cast of characters. Main protagonist Adelaide Wilson (Lupita Nyong'o), her husband Gabe (Winston Duke), her daughter Zora (Shahadi Wright Joseph) and son Jason (Evan Alex) are vacationing at the California shore, where Adelaide had an unspecified traumatic incident as a child. After some ominous foreshadowing, they find themselves stalked by a family of doppelgängers dressed in red, armed with scissors and determined to brutally eliminate their counterparts.

Semi-doppelgänger may be a more accurate term than doppelgänger, though, since these doubles aren't going to fool anyone into thinking that they're the same as the original. They possess superhuman strength, speed and agility; communicate through clicks, whistles and yelps; and, instead of hiding among normal human beings and attempting to fit into our world, make it clear to all that they're an otherworldly people with murderous intent. That is the major departure that "Us" takes from "Mirror Image" and, for that matter, most doppelgänger stories: The agenda isn't subterfuge and destruction from within, but revenge for wrongs that are gradually revealed.

The movie works because the doubles are treated as traditional movie monsters — Peele dubs them the Tethered, for reasons that become clear later on — and they exude a horrifying sense of viciousness and menace. Nyong'o, Duke, Joseph and Alex all give fantastic performances, showing impressive range as they flip from playing terrified normal humans to the sinister Tethered. Other Tethered characters also appear in the movie, and without giving away spoilers, the actors who play them are equally deft at differentiating their evil "others" from the originals.

A 25-minute "Twilight Zone" episode couldn't include the character development and elaborate horror set pieces as a movie four times its length, so Peele also employs an expansive repertoire of references to other horror classics, particularly "The Strangers."  "Us" also benefits from how skillfully it is crafted. Visuals resonate after the film has ended, Peele's mastery of tone keeps the tension up, and the music comments on as well as compliments the climactic scenes.

Like all great horror stories, its strength lies in its ability to tap into primordial human fears. Peele includes a scene that nods to Serling's inspiration for "Mirror Image," one that oddly enough never actually appeared in that episode: According to Marc Scott Zicree's "The Twilight Zone Companion: Second Edition", Serling became afraid of doppelgängers when he saw a man from behind who looked exactly like himself and was struck "with this funny ice-cold feeling that if he turns around and it's me, what will I do?"

And yet in those explanations for the story's horror phenomena, "Us" doesn't surpass  "Mirror Image" — or for that matter, Peele's masterful crafting of "Get Out." "Mirror Image" didn't need more than a perfunctory explanation and was better for it, while "Get Out" worked off a backstory that enhanced the premise and themes. The world-building in "Us" is imaginative and ambitious, but there are also enough plot holes and internal inconsistencies that it becomes harder to suspend disbelief.

Similarly, while "Get Out" satirized the perniciousness of modern racism and "Mirror Image" was a parable about trust being essential for survival, "Us" isn't as incisive in identifying its target, which seems to be class differences and social marginalization in general. "Us" also resorts to a number of gimmicks that one usually expects in lesser horror movies: A clichéd twist ending, an over-reliance on jump scares, characters making dumb or self-destructive decisions that no real-life person would do in similar situations. Large sections of the film feel padded, despite the smarter-than-average dialogue, and it is likely that repeat viewings will be more rewarded during the gonzo second and third acts than the plodding opener. But the good so greatly outweighs the bad; "Us" is definitely worth seeing, and it is a positive sign for the quality of Peele's upcoming "Twilight Zone" reboot.