Turkey plants its flag in Christchurch 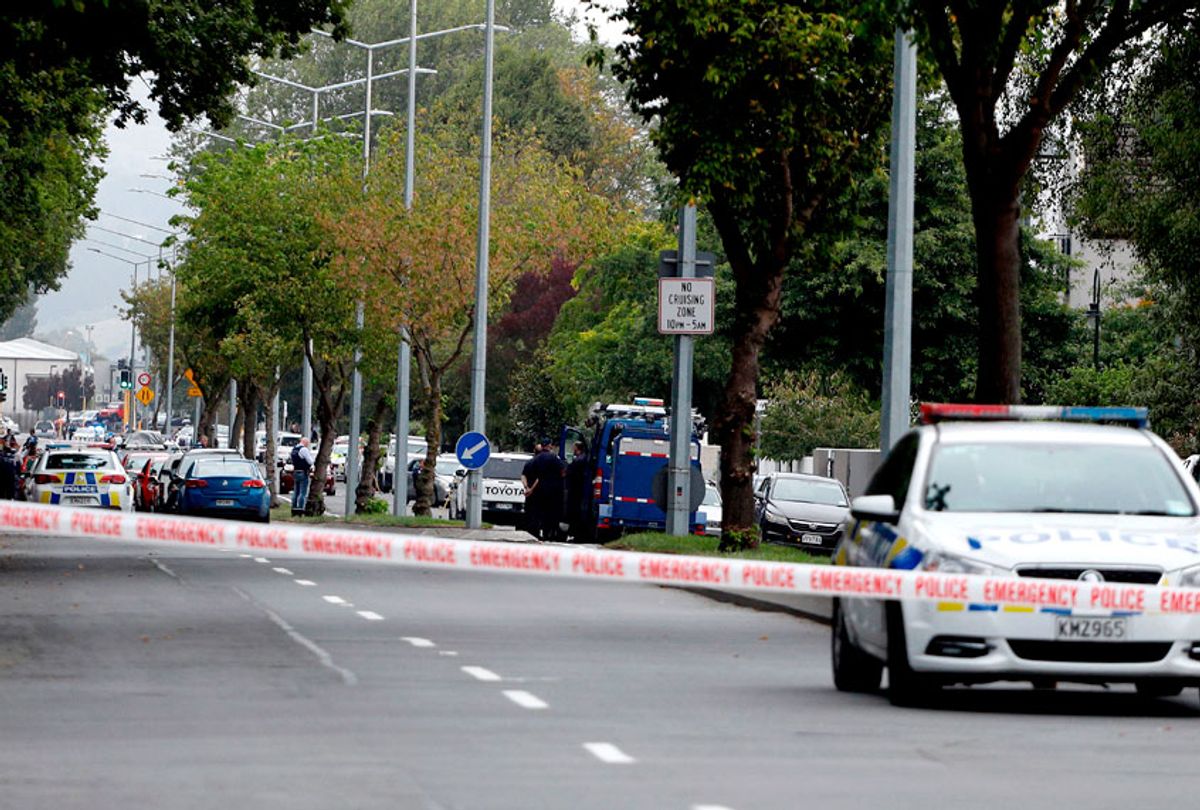 Police cordon off the area in front of the Masjid al Noor mosque after a shooting incident in Christchurch on March 15, 2019. (Getty/Tessa Burrows)
--

Messrs. Oktay and Cavusoglu were planting Turkey’s flag far and wide in a global effort to expand support for President Recep Tayyip Erdogan’s style of religiously-packaged authoritarian rule well beyond the Turkic and former Ottoman world. Erdogan’s vision is a marriage of Islam and Turkish nationalism.

Erdogan has also had no qualms to instrumentalize the tragedy that occurred in Christchurch for his domestic political purposes during the closing stages of the country-wide municipal election campaign.

Showing footage of the rampage in Christchurch at a rally in advance of March 31 elections, Mr. Erdogan declared that “there is a benefit in watching this on the screen. Remnants of the Crusaders cannot prevent Turkey’s rise.”

Mr. Erdogan went on to say that:

We have been here for 1,000 years and God willing we will be until doomsday. You will not be able to make Istanbul Constantinople. Your ancestors came and saw that we were here. Some of them returned on foot and some returned in coffins. If you come with the same intent, we will be waiting for you too.

Mr. Erdogan was responding to an assertion by Brenton Tarrant, the white supremacist perpetrator of the Christchurch attacks in which 50 people were killed in two mosques, that Turks were “ethnic soldiers currently occupying Europe.”

Turkey as leader of the Muslim world

Messrs. Oktay and Cavusoglu’s visit, two days after the attacks, is one more facet of a Turkish campaign that employs religious as well as traditional diplomatic tools.

The campaign aims to establish Turkey as a leader of the Muslim world in competition with Saudi Arabia, the United Arab Emirates and, to a lesser degree, Morocco.

As part of the campaign, Turkey has positioned itself as a cheerleader for Muslim causes such as Jerusalem and the Rohingya at a moment that Saudi Arabia, the UAE and other Muslim nations are taking a step back.

Although cautious not to rupture relations with Beijing, Turkey has also breached the wall of silence maintained by the vast majority of Muslim countries by speaking out against China’s brutal crackdown on Turkic Muslims in the troubled north-western province of Xinjiang.

It has pressured governments in Africa and Asia to hand over schools operated by the Hizmet movement led by exiled preacher Fethullah Gulen. Mr. Erdogan holds Mr. Gulen responsible for the failed military coup in Turkey in 2016.

On the diplomatic front, Turkey has in recent years opened at least 26 embassies in Africa, expanded the Turkish Airlines network to 55 destinations in Africa, established military bases in Somalia and Qatar and negotiated a long-term lease for Sudan’s Suakin Island in the Red Sea.

Like the Saudis, Turkey’s Directorate of Religious Affairs (Diyanet) provides services to Muslim communities, organizes pilgrimages to Mecca, trains religious personnel, publishes religious literature, translates the Qur’an into local languages and funds students from across the world to study Islam at Turkish institutions.

Turkish Muslim NGOs provide humanitarian assistance in former parts of the Ottoman empire, the Middle East and Africa much like the Saudi-led World Muslim League and other Saudi governmental -non-governmental organizations, many of which have been shut down since the 9/11 attacks on New York and Washington.

Saudi Arabia, since the rise of crown prince Mohammed bin Salman in 2015, has significantly reduced global funding for ultra-conservatism.

Nonetheless, Turkey is at loggerheads with Saudi Arabia as well as the UAE over the killing of journalist Jamal Khashoggi, Turkish support for Qatar in its dispute with the Saudis and Emiratis, differences over Libya, Syria and the Kurds and Ankara’s activist foreign policy.

Turkey is seeking to position itself as an Islamic alternative. Decades of Saudi funding has left the kingdom’s imprint on the global Muslim community. Yet, Turkey’s current struggles with Saudi Arabia are more geopolitical than ideological.

While Turkey competes geopolitically with the UAE in the Horn of Africa, Libya and Syria, ideologically the two countries’ rivalry is between the UAE’s effort to establish itself as a centre of a quietist, apolitical Islam as opposed to Turkey’s activist approach and its support for the Muslim Brotherhood.

The Turkey-UAE rivalry has spilled from the geopolitical and ideological into competing versions of Islamic history.

Turkey last year renamed the street on which the UAE embassy in Ankara is located after an Ottoman general that was at the centre of a Twitter spat between Mr. Erdogan and UAE foreign minister Abdullah bin Zayed al-Nahyan.

Mr. Erdogan responded angrily to the tweet that accused Fahreddin Pasha, who defended the holy city of Medina against the British in the early 20th century, of abusing the local Arab population and stealing their property as well as sacred relics from the Prophet Muhammad’s tomb, The tweet described the general as one of Mr. Erdogan’s ancestors.

When my ancestors were defending Medina, you impudent (man), where were yours? Some impertinent man sinks low and goes as far as accusing our ancestors of thievery. What spoiled this man? He was spoiled by oil, by the money he has.