Assault rifles are insane: New Zealand came to its senses and banned them. When will we?

Gun manufacturers are selling military-grade killing machines to the general public. To their fans, that's awesome 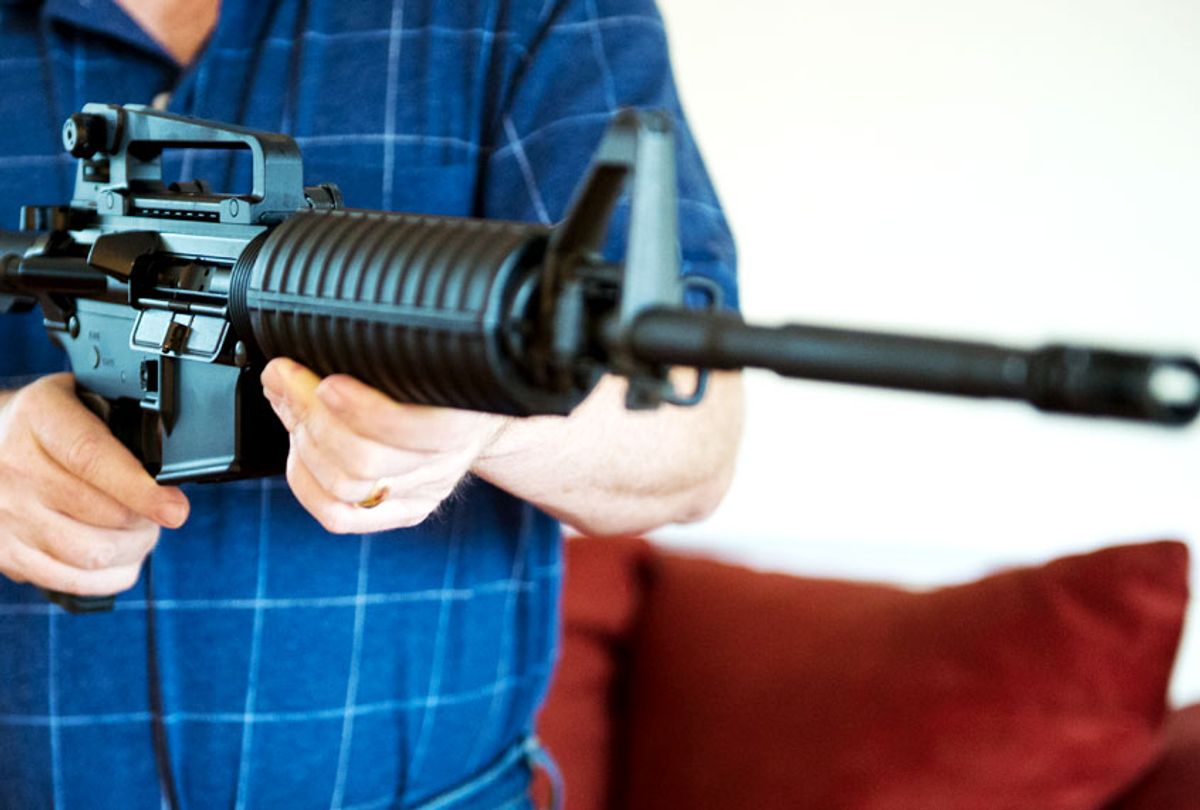 You want to know what’s insane? Don’t listen to a liberal wuss Salon writer like yours truly. Go right to the source. Go to Tactical Life magazine, which describes itself as “your source for gun reviews, gear reviews, knife reviews, and military and tactical news and information. Bringing together gear and gun tests from 18 publications, Tactical-Life.com has the most in-depth firearms information.” These folks, in their camo jackets and mirrored shades and “tactical” style boots, well, you can count on them to know what the hell they’re talking about, right? Here's what Tactical Life has to say about the Victrix Armaments Scorpio, an assault-style rifle its experts recently reviewed.

“Victrix Armaments rifles are insane, and Scorpio might be the best.”

There it is, right there in black and white. The experts in “tactical” firearms at Tactical Life magazine are telling you that this Scorpio rifle, with its “AR-style pistol grip, an infinitely adjustable folding stock and an octagonal handguard with removable rails … chambered in .300 Norma Magnum … sport[ing] a match-grade 26-inch, AISI 416R barrel lapped for accuracy and capped with a large three-chamber muzzle brake” is “insane.” And according to them, it’s just the thing you want for “long range, soft target” shooting.

Take a minute and look at all the military-speak gun-culture nomenclature babble they slap down: “match-grade” and “muzzle brake” and “infinitely adjustable folding stock” and all the rest of that crap. That’s the way they market guns like the “Scorpion,” and you know what it is? It’s insane.

OK, their use of “insane” is a kind of gun-lover-hipster-speak, and the Scorpio isn’t a semiautomatic assault rifle like the ones used to kill 20 children and six teachers at Sandy Hook, or the the 50 Muslim worshipers in Christchurch, New Zealand, or the 17 students and faculty killed in Parkland, Florida, or the 58 concertgoers in Las Vegas. But it’s the same style of weapon, with the same style aluminum stock and ventilated “rails” alongside its barrel, and it’s got capabilities far in excess of what would be necessary for  any sort of legitimate civilian usage. “Loaded up with the faster 230-grain Berger round, I got hits on a 3-by-3-inch steel target at 2,000 yards,” the reviewer boasted. That is 1.13 miles, folks. This guy claims he hit a target about the size of your forehead from over a mile away.

Who the hell needs to hit something, anything, from over a mile away? I’ll tell you who: an Army or Marine sniper, that’s who. They’re selling military-grade rifles to the general public. That’s what this sniper rifle is, and that’s what all the various iterations of the AR-15 style assault rifles are. Military-grade killing machines. All of them are for sale on the open market here in the United States of America. You can go down to your local gun store and buy one tomorrow. That means you’ll be able to set the damn Scorpion up on its bi-pod and hit a so-called “soft target” so far away you need a goddamn telescope to see it.

Oh, I can hear them now. The NRA and its ilk will tell you that this military-style assault rifle is just the thing to use hunting deer, or elk, or some other poor creature. But it’s really a killing machine, a thing you can buy that is designed for one purpose: to kill a “soft target” from up to a mile away. That is insane.

You want to know what else is insane? The list of the 24 guns found in the two rooms rented in the Mandalay Bay Hotel in Las Vegas by Stephen Paddock, who fired more than 1,000 rounds into the crowd at a concert next door, killing 58 people and leaving more than 400 with gunshot wounds. We don’t have the space to list all 24 of his weapons, but here are just a few:

That last one, the POF USA P-308 AR 10, is a rifle very similar to the insane Scorpio rifle. It’s got a long barrel, a pistol grip, an aluminum stock, vented “rails” along the barrel and the kind of scope used in the review of the Scorpio by Tactical Life. The Las Vegas shooter had it fitted with a 25-round magazine, but look at what he used with the other weapons: 100-round magazine, 40-round magazine, 100-round magazine. The other three AR-style rifles were all fitted with “bump stocks,” making them functionally fully automatic.

All these killing machines were legally bought by Paddock at the time of the Las Vegas shooting. The bump stocks have since been made illegal, but if you want to know whether you can go out tomorrow and buy a Colt M4 Carbine AR-15, or an LWRC M61C AR-15, or the goddamned .308/7.62 POF AR-10, the answer is yes.

You can also go down to the local gun shop and buy a thousand or so rounds of .300 AAC Blackout ammunition. Here is what Guns & Ammo magazine had to say about that particular bullet recently: It "provides distinctly more close-range authority than the 5.56/.223 and is particularly useful in suppressed firearms, but it falls apart at long range. Be that as it may, AR-15 enthusiasts have choices, and that's a beautiful thing.”

They’re calling these bullets “a beautiful thing,” and they’re telling you they are “particularly useful in suppressed firearms.” You know what that means? It means those bullets work really well with what we liberal-wuss Salon writers like to call “silencers.” That’s the tube-like thing you stick on the end of the barrel of one of these AR-style rifles so the damn thing will shoot without making much noise.

You want to know who uses silencers, or suppressors, or whatever the hell you want to call them? Criminals who want to shoot their weapons and don’t want to be found out. Oh, I can hear it now, the NRA types screeching about how hunters want to use suppressors so when they shoot at some animal and miss, the animal won’t hear them and they can get off another shot. Or maybe they’ll use the excuse that Donald Trump Jr. has made. He supports the legalization of suppressors so that when he shoots his big guns they don’t hurt his tender ears.

You want to know what’s insane? This kind of shit. Silencers. Suppressors. Reviews in magazines like Guns & Ammo that tell you what kind of bullet you should buy if you’re using a suppressor. It’s fucking insane. All of it.

The NRA, and the gun owners who support the NRA, and the politicians who take NRA money and refuse to pass the kind of sane law just passed in New Zealand that outlaws the ownership of these military-style assault rifles -- none of them want you to know that this is how the gun manufacturers and the ammunition manufacturers and the magazines and websites that review the guns and the ammunition talk about their products.

Tactical Life magazine will even tell you, in a red banner across the entire width of its website, that you can win a free gun this week: “MARCH FREE GUN FRIDAY: Win a Performance Center M&P Shield M2.0 + 500 Rounds of Ammo.” That’s right, dear reader! If you enter now, you can win a free gun! And 500 free bullets! All you have to do is enter!

That’s insane. It’s like a Publisher’s Clearinghouse giveaway for killers.

You want to know what’s sane? The Connecticut Supreme Court recently ruled that the parents of the kids killed at Sandy Hook can go ahead with their lawsuit against Remington Arms, the company that manufactured the Bushmaster XM15-E2S used by Adam Lanza, and they can use the way that the gun was marketed in their lawsuit. And New Zealand took only three days to ban the kinds of guns used in the terrorist killings at the mosques in Christchurch.

You want to know what’s insane? The guns we allow to be manufactured and sold in this country that are capable of killing 20 grade school kids, or 17 high school students and teachers, or 58 concertgoers, or 50 worshipers at mosques in a country thousands of miles from our shores. The assault rifles those shooters used are killing machines. That’s all they are. There is blood on the hands of the NRA and the United States Congress and state legislatures in all 50 states because they allow this shit to go on. I’ll tell you what it is. It’s insane.