Her anonymous hotel hookup: A Salon After Dark read 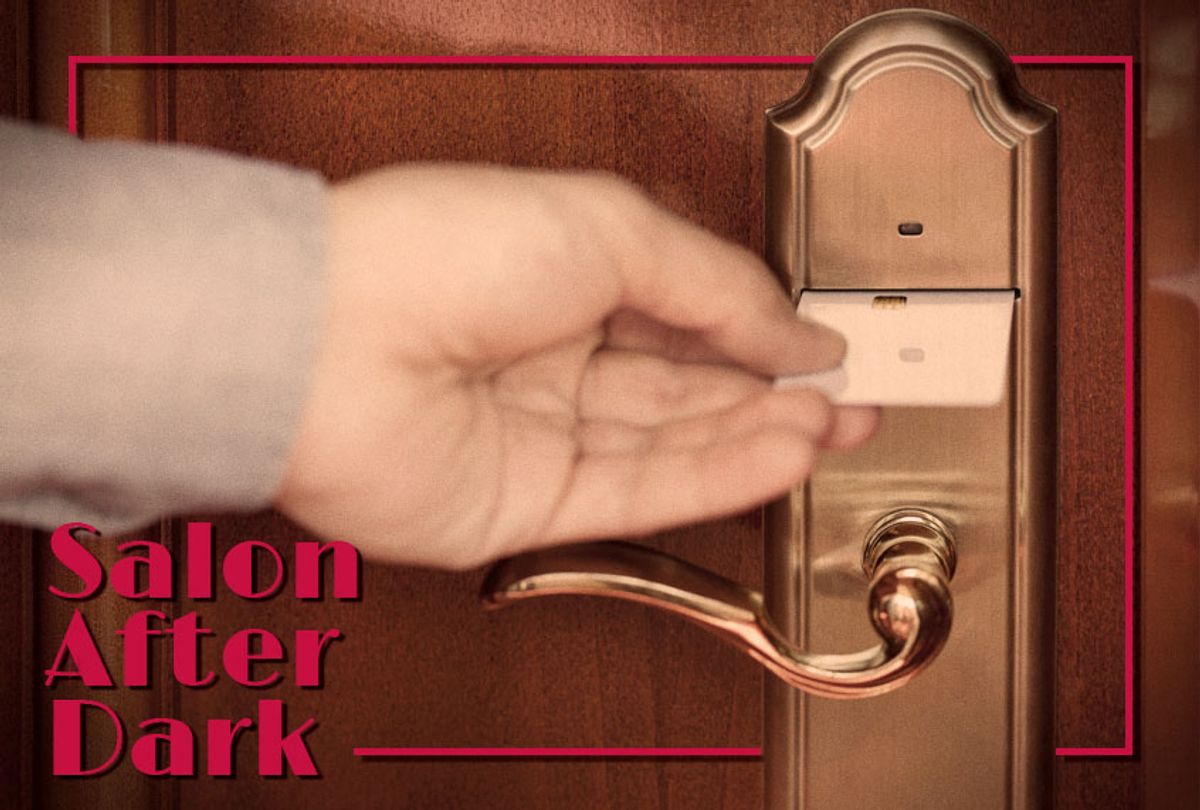 Eva is a hot mess. When her promising art career in New York takes a plunge, she enters rehab and finds sobriety—but not peace of mind. She escapes to Europe and loses herself in one hook up after another using Bangly, the newest dating app. She meets a run-of-the-mill Finnish curator and thinks it’s love. Or is it just wanderlust?
* * *

The hotel bar smelled like beer, which reminded Eva of what Aabel smelled like the first night she sucked his dick. It took a long time for him to come, and she realized it was because he was drunker than he let on. Eva didn’t typically have patience for what she called “boozy boners,” even less so now that she didn’t drink. But his was of the favorable kind. Better a hard-on that won’t quit than one that won’t fuck.

She met him at that bar. Eva was in London for a week before heading to an arts residency in the Finnish countryside. She was with her friend Fawn, who was also an artist. And Fawn knew Aabel because he curated a friend of hers in an exhibition at the Serpentine Gallery. After the show opened and the afterparty ended, they all went out f...

Aabel suggested the bar at the hotel where Eva was staying because it boasted a jukebox that only played Finnish pop songs, one of his obsessions. As Aabel and Eva danced, he translated the lyrics.

“This one’s about drinking too much and it’s fun.”

“This one’s about doing too many drugs and it’s bad.”

Eva was charmed. He was roguish and handsome. And as a Finnish curator he knew everything there was to know about the art scene where she was going. He told her where to eat the best kalakukko (fish pie) and dared her to go ice-swimming. He felt real.

Or at least as real as his Bangly profile. What Eva didn’t tell Aabel that night was that even before she met him, she knew him. He was one of the first “bangers” in London she found interesting enough to bookmark on Bangly, the hookup app.

It seemed as if fate had brought Aabel into her life.

She smiled to herself as she thought about the way his tight flannel shirt clung to his taut chest, and how his eyes glinted when he lamented the current art trends. Apparently, rambling is what prominent young curators from Helsinki do for a living. But Eva never got tired of listening to him. His voice alone made her wet. It sounded like a siren’s song. She particularly liked how her juices clung to his mustache when he went down on her and she could taste it on his lips when he came up for a kiss.

He knew how to make a girl forget what she was running away from.

He knew the art of sexually pleasing damaged souls.

Shashi, her Wellness Guru, had recommended celibacy for her first year of sobriety, probably to protect her from situations like this. Whatever.

The smell of cologne from the bespectacled businessman sitting next to Eva drove her a little mad. It reminded her of the last night she and Aabel spent together. She remembered a bottle of Hugo Boss on his shelf. The businessman wore the same scent. It was woody and strong with a hint of citrus. She could feel her face flush with arousal.

She turned and flashed him a dirty grin.

The businessman probably thought Eva wanted to fuck him, and yeah, she did. But what she wanted most was to lean in and inhale deeply, filling her lungs with the scent.

Her burger arrived and she smiled again at the businessman. She took one large bite and let the burger juice drip around her lips as she slowly licked it up. She saw the businessman’s eyes gaze at her intently. Some women didn’t like to eat in front of men. In Eva’s experience the most sexually satisfying ones appreciated a healthy appetite in a woman.

Tomorrow she’d be in Finland and the businessman would be home with his wife, or maybe playing golf if the weather permitted. And where the hell would Aabel be? Fucking some other brunette? She couldn’t tell if he was the type, but then she didn’t really know him at all, even though she must have heard his opinion on every video artist who has ever made work in Europe. All she knew was that he muttered “I really like you” once as he drifted off to sleep. And that was enough. She knew this meant he loved her. At least a little.

Do normal people feel this fucked when they fuck someone?

Is this feeling of connection even real?

The endless chattering of questions began to fill her mind. It was one of the ways Eva’s addictive personality expressed itself. That, and fucking.

Are illusions worth having if they make you feel okay in the world?

Is sex different in Europe?

Why are men who are so good at eating pussy so bad at making coffee?

What the hell is speculative realism anyway?

Should I move to London?

Eva tried to quiet her mind by focusing on remembering the first night she spent with Aabel, which was only six days ago. He had practically nothing to offer but water and a half-smoked joint. She loved that he had been in bed until the evening and his forehead dripped with sweat from a hangover. She hated sports, but loved that he wanted to watch the futbol game, and loved it even more when he talked over the entire thing. She loved that he hated people with dogs but thought people with babies were fine because they didn’t impose their love on you as much. She loved when he contradicted himself while working through an idea. She loved that he fucked her when the game went into overtime and complimented her tousled hair after his team won. She loved that he didn’t call when he said he would, and when she texted first she had to wait all day for a response. She loved how much that hurt.

Shashi also told her that addicts had dulled pleasure centers in their brains, and because of that the good feelings were fleeting.

When her check arrived, she signed it and then glanced coyly to her right. She caught the businessman’s eye. Eva slid her spare key across the bar and then leaned over to whisper into his ear: “Room 602.”

She’d seen it in the movies a million times, but was surprised it was this easy in real life.

Her heart fluttered as she walked out of the bar and made her way back to her room. She sat at the foot of the bed staring at the doorknob for what seemed forever. Chills spread over her body at the sound of the key card sliding in and the lock clicking.

“Are you a hooker or something?” he blurted out. Normally she would find that question reprehensible, but she ignored it. She was different now, after her stint at Promises. She dropped to her knees and reached for his belt buckle. He chuckled nervously, which also did not help the mood.

God, she thought, I need this.

She spotted the tan line on his finger where his wedding ring once sat and her lust intensified.

She unzipped his fly and caressed his balls. Eva had sucked enough cock to know where this was going. She wrapped her manicured fingers around his growing erection and teased him by thoroughly lubing the tip of his cock with her wide open mouth. Salvia dripped down to the base of his shaft. Then, she devoured his rigid tool, looking up at him as his cockhead touched the back of her throat. He was in a trance. His hardness pulsed at the same rate as her heartbeat, glistening from her saliva. Slowly at first, then gradually picking up the pace, Eva fucked his cock with her warm mouth. He soon started having trouble standing, so she clutched his ass with both hands to keep his dick in her mouth. Suddenly he grabbed the back of her head and began to plunge himself deeper and faster into her. Eva let out a moan of satisfaction and opened up her throat to take in every inch. Thrust after thrust she sucked him to perfection. At last he yelled, “Scheiße!” His whole body jerked backward as his knees buckled. Warm cum filled Eva’s mouth. And she swallowed it all. She wanted to feel fucking full.

It was as if a page had been torn from some ancient dick-sucking handbook. Your older sister had had it passed down to her, from generation to generation over centuries of getting your face fucked right.

After the handbook finish, Eva looked up at him. “Your turn.”

Still a little dazed, he threw her onto the bed and clumsily slid her wet panties off. She pulled her dress over her head in one motion, exposing her supple and firm breasts. She’d gotten really good at that move and it never failed to impress. She slowly spread her legs to reveal her glistening wetness as he got on his knees at the foot of the bed. He then placed his hands on her calves and began to massage them firmly. Slowly, he moved his hands up her legs until they reached the sweet spot. He stared at her pussy as if he was carving a Thanksgiving turkey for the first time in front of his in-laws and didn’t know where to start. He gently entered her with two fingers as he lightly rubbed her clit with his thumb. Eva’s heart was pounding as she moaned and writhed on the bed. He pushed his finger deeper into her and with a gentle twist his knuckles began to rub her G-spot.

Then everything around her fell into nothingness.

The best thing about married men is their years spent getting out of trouble with their wives by going down on them. You can’t fake that level of experience.

On second thought, the best thing about married men is their eagerness to please.

There are few things in life that can make you feel as simultaneously high and low as fucking a man that is fucking you to avoid thinking about someone else.